Representatives of three organizations discuss the impact of Covid-19 on the poor and marginalized, and on development.

In recognition of World Humanitarian Day, August 19, 2020, the Ismaili Jamatkhana and Center hosted “The Future of International Development.” Sherina Ebrahim, Chair of the Aga Khan Foundation USA National Committee moderated the session, with representatives from three leading global humanitarian organizations: Fatema Sumar, Vice President of Global Programs at Oxfam, Dr. Jeremy Cole, Managing Director of the Southeast Region of UNICEF USA, and Khalil Shariff, CEO of Aga Foundation in Canada and USA, joined together to discuss the work of their organizations along with discussing the future of international development.

Fatema began the conversation by stating that more than 700 million people, equivalent to ten percent of the world and twice the population of the US, currently live in extreme poverty. Hundreds of millions of people will still be living in poverty by 2030, and a majority of these impoverished individuals will be women and girls. This is the demographic that Oxfam is committed to helping.

Fatema explained the extreme inequality that exists in the world today by sharing, “nearly half of humanity scrapes by with less than $5.50 a day, while the world’s 2,200 billionaires have more wealth than 4.6 billion people combined.” This is exacerbated when pandemics affect people unequally, with coronavirus being the final straw for some people who are struggling.

Oxfam is working to end the pandemic by partnering with 14 million people to prevent the spread of Covid-19 and to provide basic needs while continuing to fight poverty. “Poverty is man-made,” she says, “we create poverty every day in the choices we make as citizens, as consumers, as voters. We can choose to create a world that doesn’t have it (poverty).”

With 70 years of experience in 90 countries, Oxfam fights it in three ways – the non-profit helps to build better futures, holds the powerful accountable, and saves lives from disasters. With a focus on resiliency and the intersection of crises and challenges, Oxfam works to create a better future for women and children.

Next, Dr. Jeremy Cole spoke to the different choices people are faced with in a pandemic: a fork in the road. Covid-19 can make people retreat into their homes and communities, and cause people to use social distancing to avoid the problems of the world. He sees this as the wrong path to take – instead, we need to take the one that recognizes this moment, as we are experiencing a shared and vulnerable humanity. As an example, children in the developed world who are home during this pandemic share the situation of one billion children who do not have the means to attend school in the developing world. He wants people to recognize this as “a moment of window rather than of wall,” and encouraged the viewers to work together as a global community.”

UNICEF is committed to saving the lives of children in 190 countries and territories, with a focus on philanthropy across borders. Dr. Cole shared an anecdote of Safa, a young girl from Syria who lost her leg during the war and was then forced to flee to a refugee camp. She was asked what her dreams were and asked for three things: wanting to move to Canada, a new prosthetic leg, and a bed of her own. He explained this phenomenon as “relentless optimism” that is present in those who have an unsettled life, and he encouraged that this should be the ethos of humanity going forward. “We believe that if you build a world that works for children, you will be building a world that works for all of us,” he said.

Khalil Shariff joined the conversation and stressed the marginalization that has been exacerbated by the Covid-19 pandemic, and which cannot be addressed in isolation. Societies need to provide educational, economic, and healthcare support in order to survive. Khalil explained the work of the Aga Khan Foundation (AKF) as a global development agency with a focused presence in Asia and Africa, and its connection to the Aga Khan Development Network (AKDN). 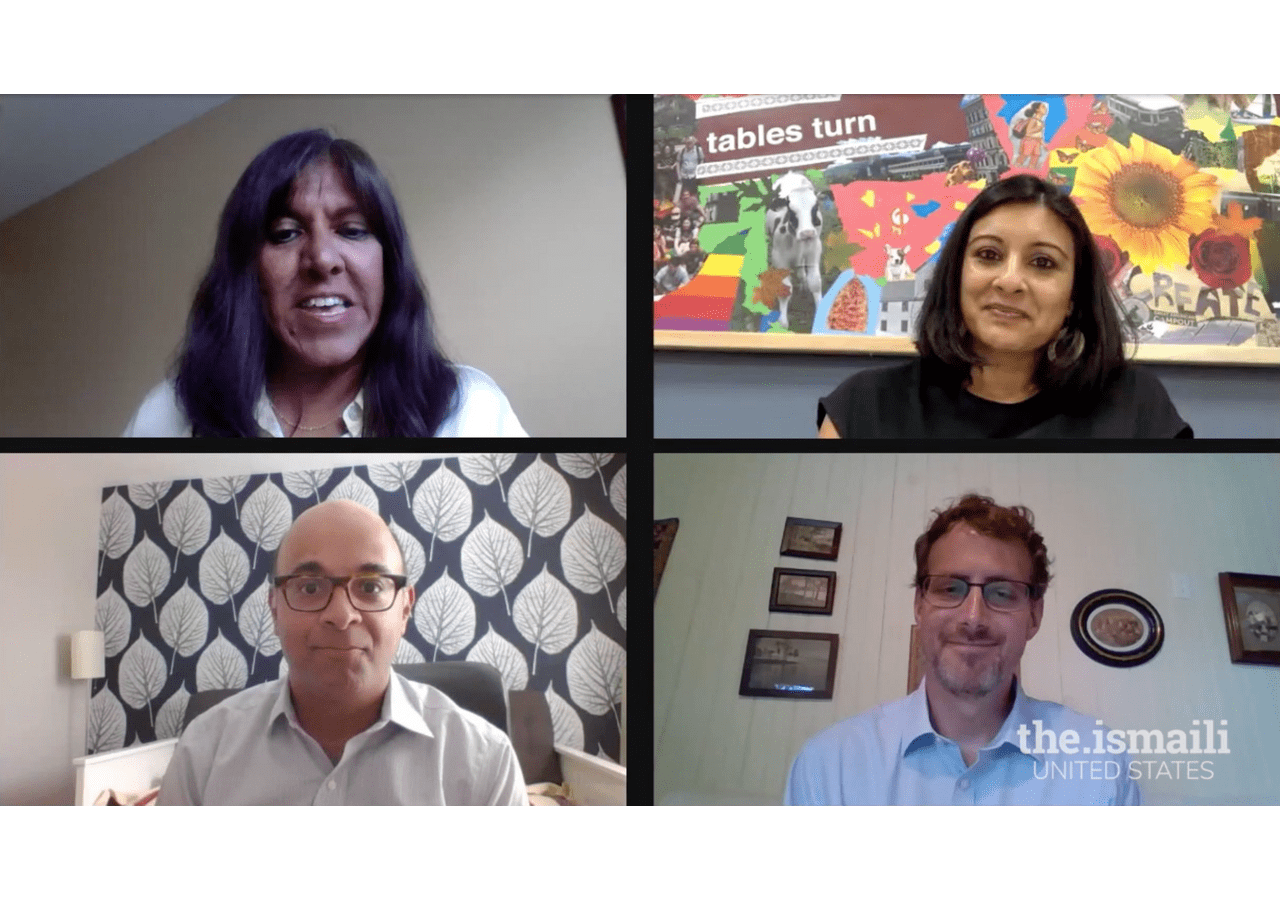 Representatives from Oxfam, UNICEF, and the Aga Khan Foundation in a virtual panel discussion, on World Humanitarian Day. The session on the topic, The Future of International Development, was moderated by Sherina Ebrahim (top left)
The.Ismaili

Discussing AKDN’s work, Khalil referred to the building of permanent local institutions that serve as an indefinite part of the community, especially in times of crisis. He explained that “this all stems from the AKDN mandate of office which is acting on an ancient ethical impulse to contribute to the human development of society,” with a focus on preserving and advancing human dignity, agency, and self-reliance. The goal is for people to have practical and psychological control over where their lives are going with a genuine sense of partnership to replace walls that divide with bridges that unite.

The panelists were asked to explain how their organizations are coming together to address these common, critical issues. Dr. Cole shared a current UNICEF campaign called “You Record,” which is engaging local communities to create their own solutions. Young people sign up for this text message-based platform through which UNICEF pushes out public health messages while surveying young children about their needs. This data is then translated into solutions by a method that he explained as “getting muddy boots on the table.” The information from the grassroots is taken directly to the national governments and change-makers, with the aim of bringing about real change.

Fatema added, “before Covid-19 hit, women and girls put in more work at home, something called unpaid care, equivalent to 12.5 billion hours of unpaid care every day. If society puts a value on that care then it would come out to $11 trillion of economic value a year, which is three times the size of the world’s tech industry.” During the pandemic, this number has increased dramatically, exemplifying the gender impact of Covid-19. She also spoke of the hunger crisis that affected 821 million people before the pandemic. That number is now as many as 12,000 a day who could die from hunger if we don’t have the resources to address this crisis.

According to Khalil, “there is no silver bullet answer to these issues.” With massive pullback from traditional donors on their historic commitments, Khalil believes it is even more important for people to understand that “ethical commitments don’t carry passports” and we must come together to address these issues.

Fatema warned that if we do business, as usual, we may fail because we have a broken humanitarian system that is governed by a few. The solution arises by empowering local humanitarian leaders as frontline workers where they have the power and money to respond.

When asked what citizens can do to help fight against these issues and create change, Dr. Cole shared a story from the UNICEF office in Beirut. After sustaining damage by the recent explosions, employees handed out brooms and shovel the very next day, to help vulnerable populations clean out their homes and rebuild their lives. “We can tackle global problems if we do it well,” he said, showing citizens that the ability to create change is there.

Fatema asked, “What can’t citizens do? If we are committed to a world that doesn’t have poverty and that is completely attainable during our lifetime, what can’t we do for that change? Citizens are calling for transformation change – we are tired of step by step change.”

Finally, Khalil touched on the idea of becoming a global citizen and what kind of transformation that requires on our part. He explained, “The notion of being a citizen is to draw a boundary around a political community… What we are doing is asking ourselves to erase that boundary that we usually think about as the fraternity of citizenship and draw the line around all of humanity.” This change includes being able to leverage and understand our differences as a gift, rather than as a division to be fought over. He ended by saying, “It is up to us – will hope prevail, or will fragility prevail?”

This powerful conversation with three change-maker global organizations affirmed that creating change is a mindset that all people need to adapt in order for there to be achievable change. The impact of a community that can think outside of itself, and act as a global unit is unstoppable.

Each guest represented organizations of humanitarians who are embracing this global citizenship with a vision for a better future. They hope that their organizations become obsolete, in time, as there will no longer be a need to fight poverty, create equality, and build institutions, as these issues will have been addressed and resolved.