Nashir Janmohamed has been fascinated by the moon and solar system for as long as he can remember. As a child, he often dreamt of stepping on the moon and soaking in rare sights of Earth from thousands of miles away. As an adult, he’s converted his curiosity into career opportunities.

The 25-year-old Los Angeles native is currently in his fifth internship for NASA’s Kennedy Space Center in Florida, most recently working in machine learning, modeling, and control. This fall, he will begin a second bachelor's degree in computer science at the University of Central Florida.

Nashir’s journey to NASA wasn’t concretely defined from the start – he took a few detours along the way to discover his path. He says his story offers a valuable lesson for young Ismailis who want to explore a new career field but are not sure how to make the leap.

“You’re always going to doubt yourself the most, so if you try to reach for opportunities that you want and you think you can do, you will be in a good place and much further along than if you listened to yourself and thought, ‘Oh, I’m not good enough for this,'” he says.

Nashir’s father used to work at a defense and aerospace company, often unable to talk about his projects because of the sensitivities surrounding them. The secrecy fueled Nashir’s curiosity about this field in childhood, but he wasn’t ready to pursue his father’s path just yet. He wanted to try something different first.

Growing up in a family that loved music, he decided to play jazz in both middle and high school. He enrolled at the University of California, Los Angeles, with the intent to pursue music as a career, and graduated in 2017 with a Bachelor’s degree in Jazz Studies.

Writing and performing music with his friends was an exhilarating feeling but something in the back of his mind kept tugging him toward engineering, where he felt he would be able to leave a broader impact on the world and combine his interests in robots, space, and working on problems that help a lot of people.

“Engineering seemed like a really cool way to solve different problems and do interesting work every day,” he said. Transitioning to engineering would require Nashir to have some experience in the field if he wanted to land opportunities at places like NASA. He reached out to people in the Jamat and his UCLA professors for advice on how to approach the transition and after graduating, enrolled in math, science, and computer science classes at a local community college.

A professor introduced him to NASA’s Community College Aerospace Scholars program, an online program that educates underrepresented students about the agency’s work, and invites them to visit a NASA center for a four-day, expenses paid onsite experience. 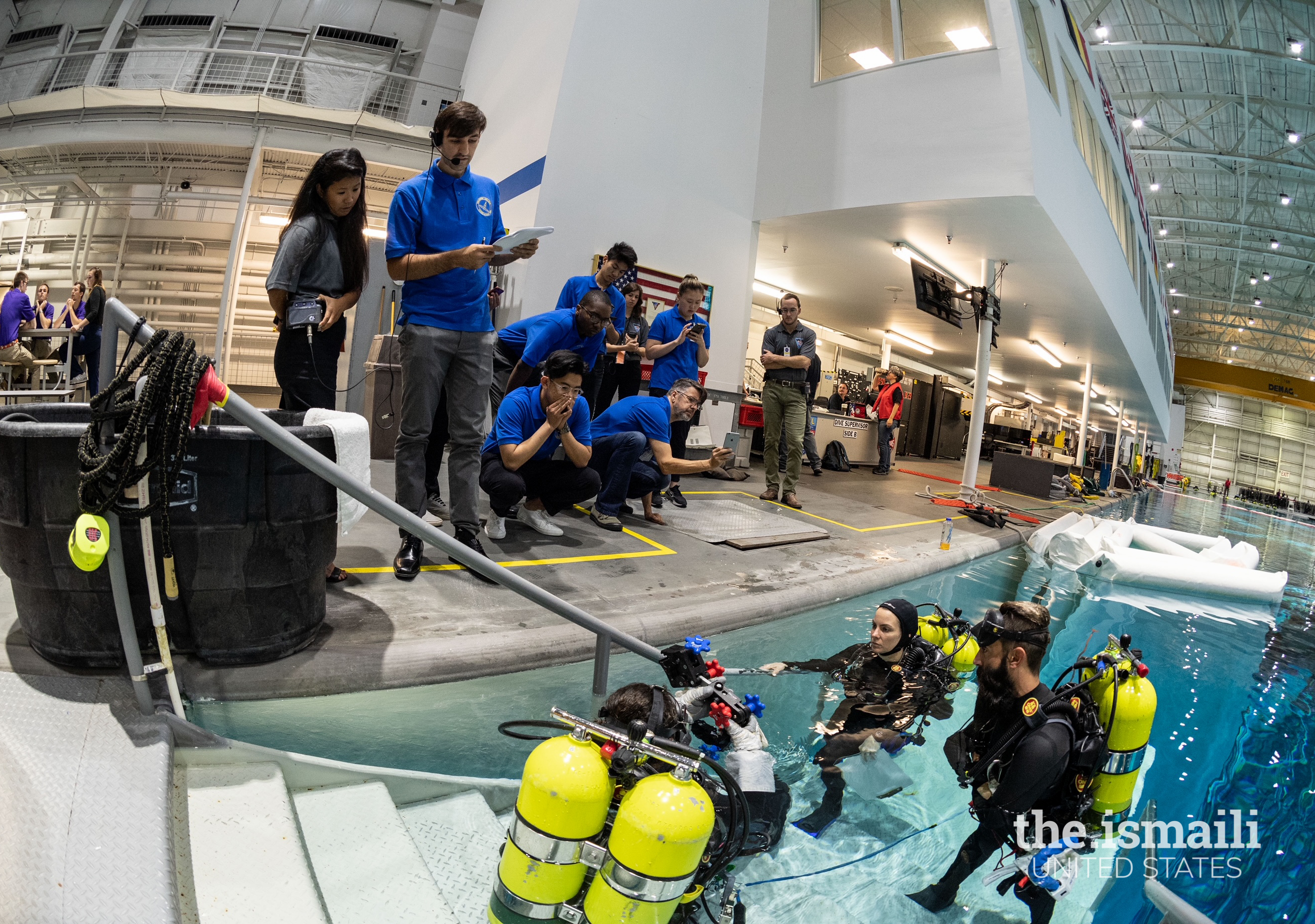 Talking with divers at NASA's Johnson Space Center in the Neutral Buoyancy Laboratory about my team's camera attachment mechanism for use onboard the International Space Station.

Hearing from NASA scientists, building and programming a small robot, and attending seminars eventually led Nashir to an internship at Kennedy Space Center in Florida. Sifting through hundreds of lines of codes that others had written and finding errors in those lines was a challenging, and fascinating, learning experience for the budding engineer.

One internship soon turned into five, and a number of mentors and projects at NASA. He realized that while the two are vastly different, music and engineering, instill communication and collaboration skills that are valuable in any career.

“99 percent of music is unsuccessful if you aren’t doing your absolute best to connect and work off of the people you’re making the music with. Learning that has led me to be able to collaborate better and understand where other people are coming from in projects,” he remarks.

For one of his first projects, he conducted computer simulations and analyzed where objects were moving in hopes of tracking and predicting the objects’ paths moving forward. The project was future-looking, as many NASA projects are, because it envisioned how robots might interact with each other and avoid collisions.

One of his early mentors gave him a piece of advice that helped frame his approach toward even his toughest internships: “The most important part of your internship is that you learn and you grow and whatever you produce is a happy byproduct of that,” the mentor told him.

Nashir’s journey has been a source of pride for his mentors, too. Aga Khan Education Board West Chair Alif Khalfan, who Nashir approached years ago when he was weighing whether or not to pursue a career in engineering, hopes other students will be inspired by Nashir’s grit and courage as they make choices about their own path in life.

“Nashir is a very bright and curious person,” Alif said. “More than anything, he possesses the courage to pursue that curiosity and this trait will take him far in life.” 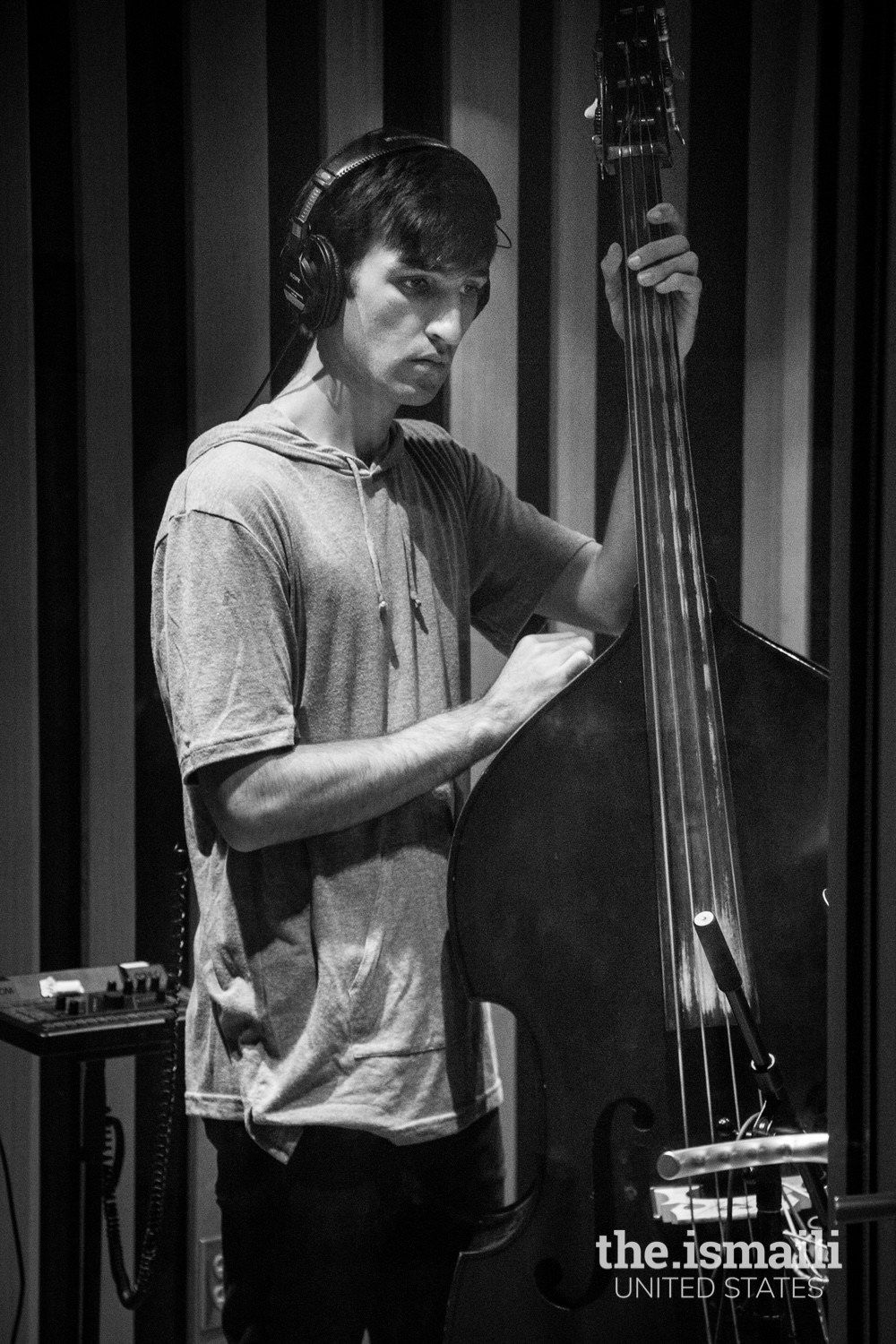 Performing at UCLA's Popper Hall with a jazz trio.

Now, Nashir hopes to pay it forward and mentor other students who are still exploring their path in life.

“Being open, being willing to try new things and listen to new people share their experiences is the most important thing you can do if you’re trying to figure out the right thing for you to do.” he suggests. “It’s really important that you are doing something that you feel fulfilled by and that you think will bring value to your life and to others’ lives.”

Nashir also wants students to know that they don’t have to leave one passion behind completely to pursue another – music has remained an important part of his life despite choosing to pursue a career in engineering.

He still keeps his bass handy while in Florida and every so often, Nashir takes a break from coding and computers to play music and clear his mind. He hopes to reunite with his friends when the threat of COVID-19 has passed and play music with them in his spare time.

But engineering seems to be a passion and Nashir has adopted the new field of robotics too, volunteering with a robotics team during one of his internships. He is also building a robot in his spare time.

As if all this was not enough to keep him occupied, he also enjoys rock climbing–he built a climbing wall in his backyard–backpacking, camping, hiking, chess, tennis, and basketball.