Gender inequality remains an unfortunate reality of our society. Even in 2020, female representation across a variety of professions remains uneven, with certain professions still characterized as traditionally “male” or “female.” Such stereotypes are perhaps most commonly experienced in the fields of science and technology. There is continued emphasis, however, in schools today to encourage girls to study STEM-related subjects and to enter such professions with some positive results. Encouraging girls to learn coding or try robotics are some of the newer opportunities for girls to familiarize themselves with such experimentation. 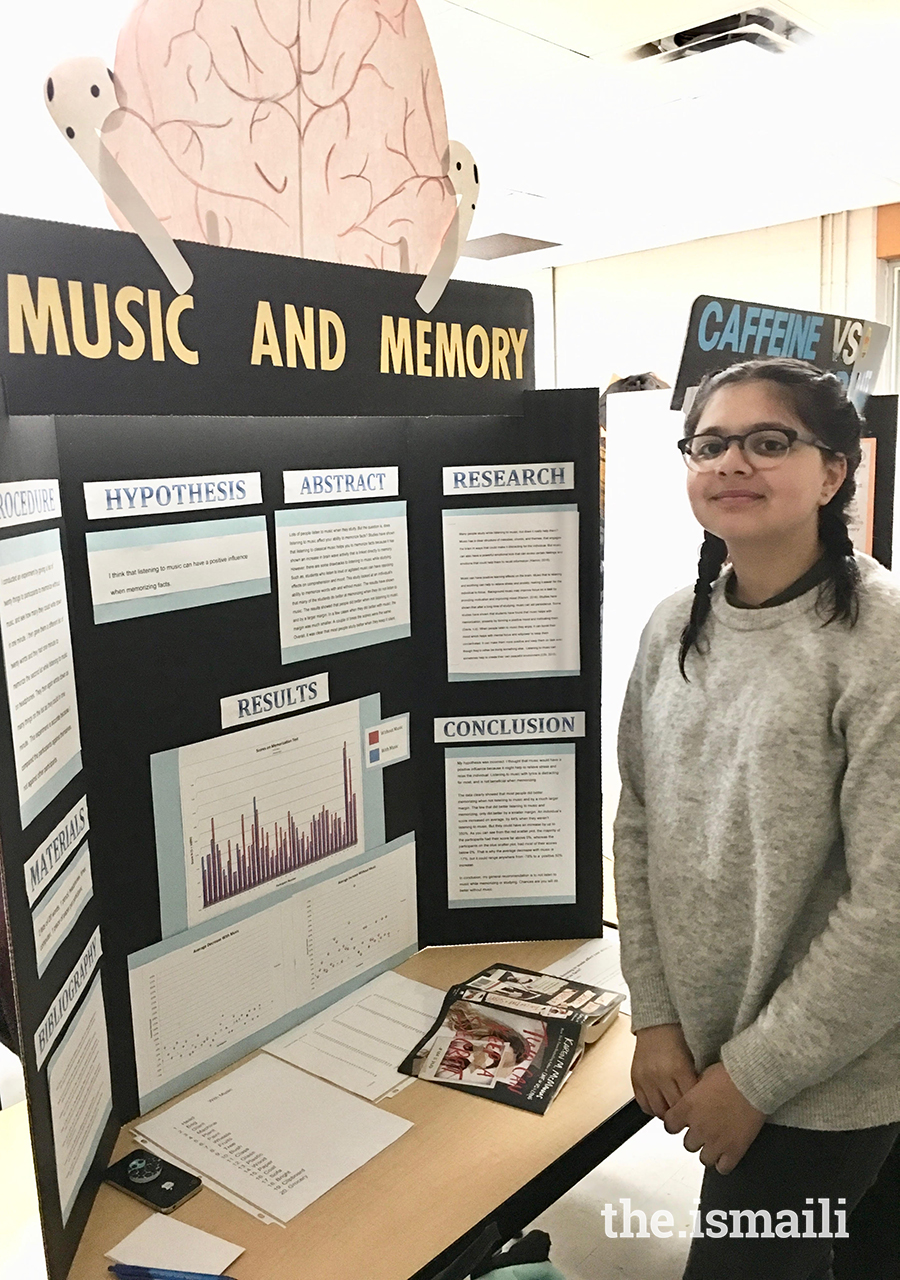 Mishka Nazarani poses next to a display of her music and memory experiment.
Photo: The Ismaili 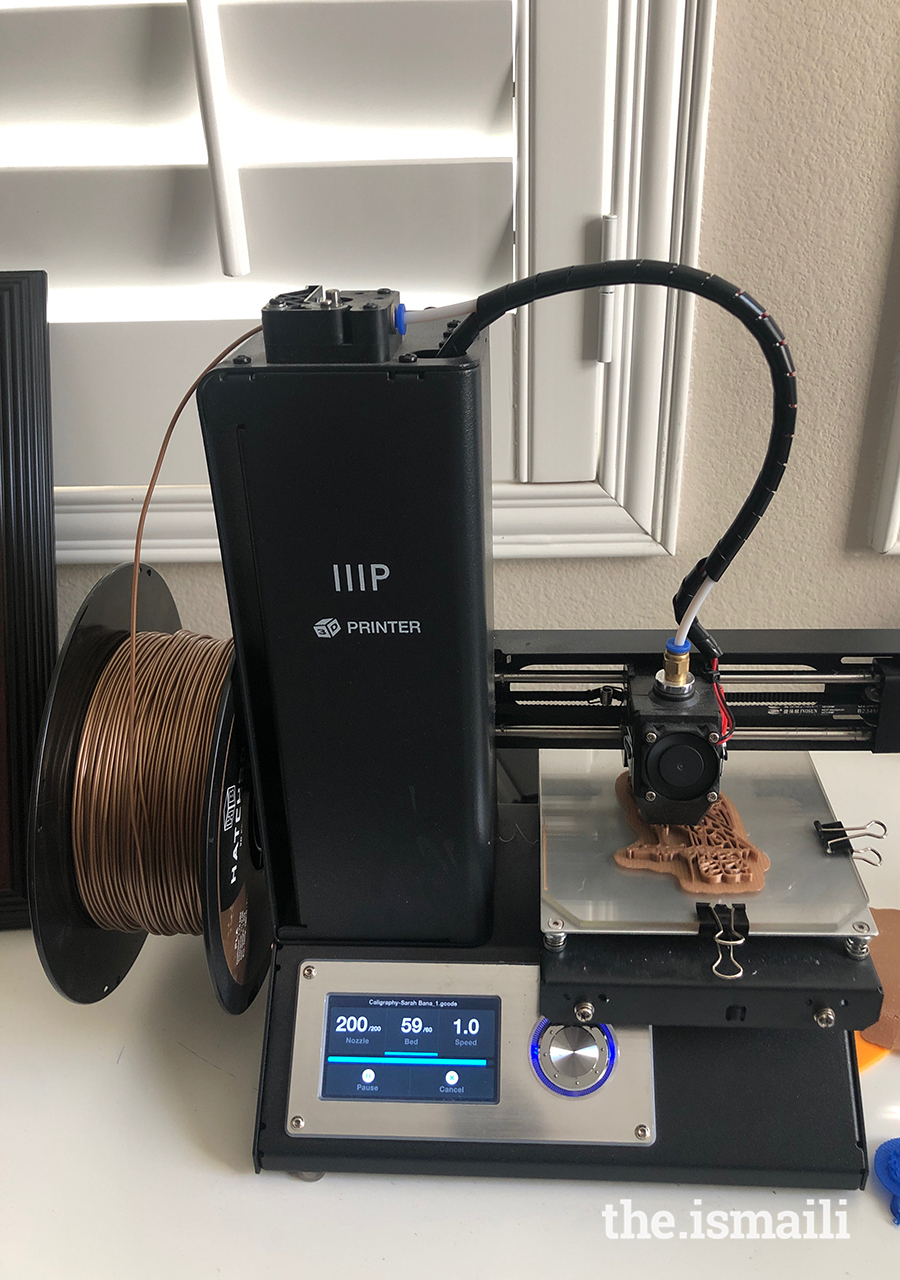 Nabeela Talib's 3-D printer in the midst of creating a piece of artwork that Nabeela found in a book.
Photo: The Ismaili

Much like Mishka, 13-year-old Nabeela Talib of Orange County, CA, has ventured into the world of programming and robotics. Inspired by her dad, Nabeela was given a 3-D printer and started a business. She began marketing her services and printing objects like key chains, phone stands, and custom items like a missing scooter part. Apart from her business, Nabeela also learned how to code for a science fair project in which she configured how to send messages from a phone to print a sticky note. Nabeela gets the most satisfaction from building and fixing things, and hopes in the future to do something in both robotics and entrepreneurship. Her problem-solving nature lends itself to an engineer in the making.

While gender is certainly not a limitation to any profession, neither is age. Five girls in Sugar Land, Texas — Leila, Rida, Sahara, Sanya, and Shaivi — participated in the First Lego League (FLL) Junior program for children as young as nine. These girls were coached robotics for 14 weeks by Amjad-Ali Khoja. The FLL challenge for 2018 was called Mission Moon, which involved four phases modeled after an engineering design process, including building a LEGO rocket ship. The girls won the “Simply Awesome” machine award, but were perhaps most memorable for their gracious professionalism, and efforts to be “helpful, kind, and show respect when we work, play, and share,” said coach Amjad.

These girls are prime examples of the fact that the growing field of robotics can be a passion for anyone. Mishka and these young women truly illustrate that gender is not an impediment to pursue an interest in science, or any other field. All it takes is perseverance. What matters most is a person’s capability to do any job. However, what seems to be lacking is opportunity and representation, which is why Mishka stresses the importance of women going into fields related to science and technology.

Mishka notes that roles traditionally seen as a “man’s job” become uninviting where women end up bypassing these professions, and succumb to an ongoing cycle that never breaks. As a result, women’s issues, whether in the workplace or society at large, end up being ignored. Instead, she urges, “If more women went into science and research, more of these issues could be addressed and represented from a female perspective.”

Mishka hopes to study astrobiology to learn more about extraterrestrial life and how humans can adapt to outer space. She dreams of being an astronaut some day.