A Navroz Celebration for New York City, through crafts and music activities that showcase the diversity of expression in the Ismaili community.

The Jamat of New York City, in partnership with the Children’s Museum of Manhattan, invited families of different faiths to a celebration marking the festival of Navroz.

“The desire was to teach the greater New York community about Navroz and the traditions associated with it,” said Shazma Alibhai, from Manhattan, who managed the event. “It’s wonderful to see kids from all communities participating. We even saw groups from the Religious Education Center attending as part of their curriculum.”

“We are truly blessed to live in such a diverse county,” shared Anushka Kassim from the Manhattan Jamatkhana, who had invited families from other faiths. “We invited our kids, and their classmates, to enjoy the festivities to see what their friends’ holiday looks like. They had a great time.” Participants had an opportunity to learn how to cook unique dishes in a cooking class which gave parents and their children a time to bond together.
Inaara Tuan from Manhattan Jamatkhana led aspirational chefs in the cooking class. “We are going to teach you how to make a healthy, energetic, and delicious Navroz snack - one that you can make with your parents at home and share with others.” As the recipe is announced, kids start noting it down. Everyone is involved in making the snack with shredded coconut and date balls (tupak e khorma), a delicious treat at Navroz.

“I appreciate the community that has put on the event. It’s a fantastic way to learn about other traditions,” remarked a parent, walking by the henna station. People in South Asia, Central Asia, Africa, and the Middle East have been decorating their palms for over 9,000 years. Today, many use temporary tattoos during celebrations.

Navroz is celebrated in many parts of the Middle East and Central and South Asia, particularly among peoples influenced by Persian and Turkic civilizations. In countries such as Iran, Iraq, Azerbaijan, Turkmenistan, Tajikistan, Uzbekistan, Afghanistan, Kazakhstan, and Kyrgyzstan, Navroz is observed as a public holiday.

“It’s great to learn about other cultures, isn’t it Sid?” questioned museum-goer Nicole Roberts of her daughter, who responded with a smile and a nod. “I think the tile painting was a really nice way to get kids involved in something they don't normally do,” said Nicole, while her daughter added excitedly, “I painted a tile with my favorite colors: purple, green, and orange.” Her mother held the tile and said she would display it in their home.

Inaya Bhai from Long Island taught a session on an Indian dance (raas), a traditional folk-dance from Gujarat. Then Mukhabbat Beknazarova led the children in a Tajik Dance which showcased graceful movements of the arms and hands resembling the flight of birds. “It’s not difficult to get kids excited for Navroz. What’s difficult is to pull the kids away from one activity to another so that they can experience them all,” said Anushka Kassim.

“The kids are so involved that they don't have time to speak to me,” said Noelle Velec, who works at the Children’s Museum of Manhattan.

“People showed great interest in the haft-sin table,” shared Iman Tuan, a 12-year-old from Manhattan who answered questions from visitors. “There was a particular lady from China who said in their culture they also put out senjed and coins as a part of their tradition,” she noted.

Sameer Walji and Iman Tuan explained that the haft-sin table is set with seven items beginning with the letter “s” - sib (apples), sonbol (hyacinth), serkeh (vinegar), senjed (oleaster or Persian olives), sabzeh (lentil or wheat sprouts), samanu (pudding), sekkeh (coins), as well as other items, such as goldfish, a mirror, and painted eggs, each having a symbolic meaning.

“I have never done an event like this before where children and parents are totally involved. I didn't know about this holiday,” said Zoe Matti, who works at the Children’s Museum. She added: “The parents’ feedback has been great. Some of them were like, ‘Oh! I didn’t hear of this holiday. It’s a great way to learn and teach the kids.’ This is really different than what we have done in the past and people like it.”

The day was filled with activities, and “at the end, everyone walked away having learned something about another tradition and the celebration of Navroz,” said Shazma Alibhai in her parting comment. 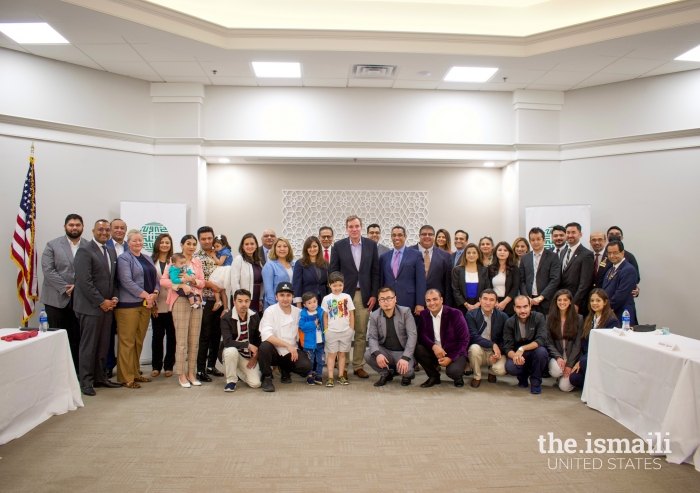