The President of the Aga Khan University (AKU), Dr. Sulaiman Shahabuddin, and the Dean of the School of Nursing and Midwifery in Pakistan, Dr. Rozina Karmaliani, recently visited Jamats, donors, and alums, in three U.S. cities in Texas and Georgia.  They were accompanied by Dr. Zeenat Sulaiman, the Regional CEO for Aga Khan Health Services in East Africa and an alumna of AKU.

Dr. Shahabuddin shared the university’s global impact and mission to improve the quality of life in the developing world and beyond through world-class teaching, research, and healthcare delivery.

In Houston, the Ismaili Council for the Southwestern United States hosted a dinner for members of the Pakistani diaspora, civil society, and community leaders within the Ummah. In his keynote remarks, Dr. Shahabuddin said that AKU had led change in its nearly four-decade history as it continues to raise higher education and healthcare standards. He noted that training health professionals at government hospitals during the global pandemic was an excellent example of how AKU provides knowledge to improve health and education in Pakistan and assist the government in better serving its people. 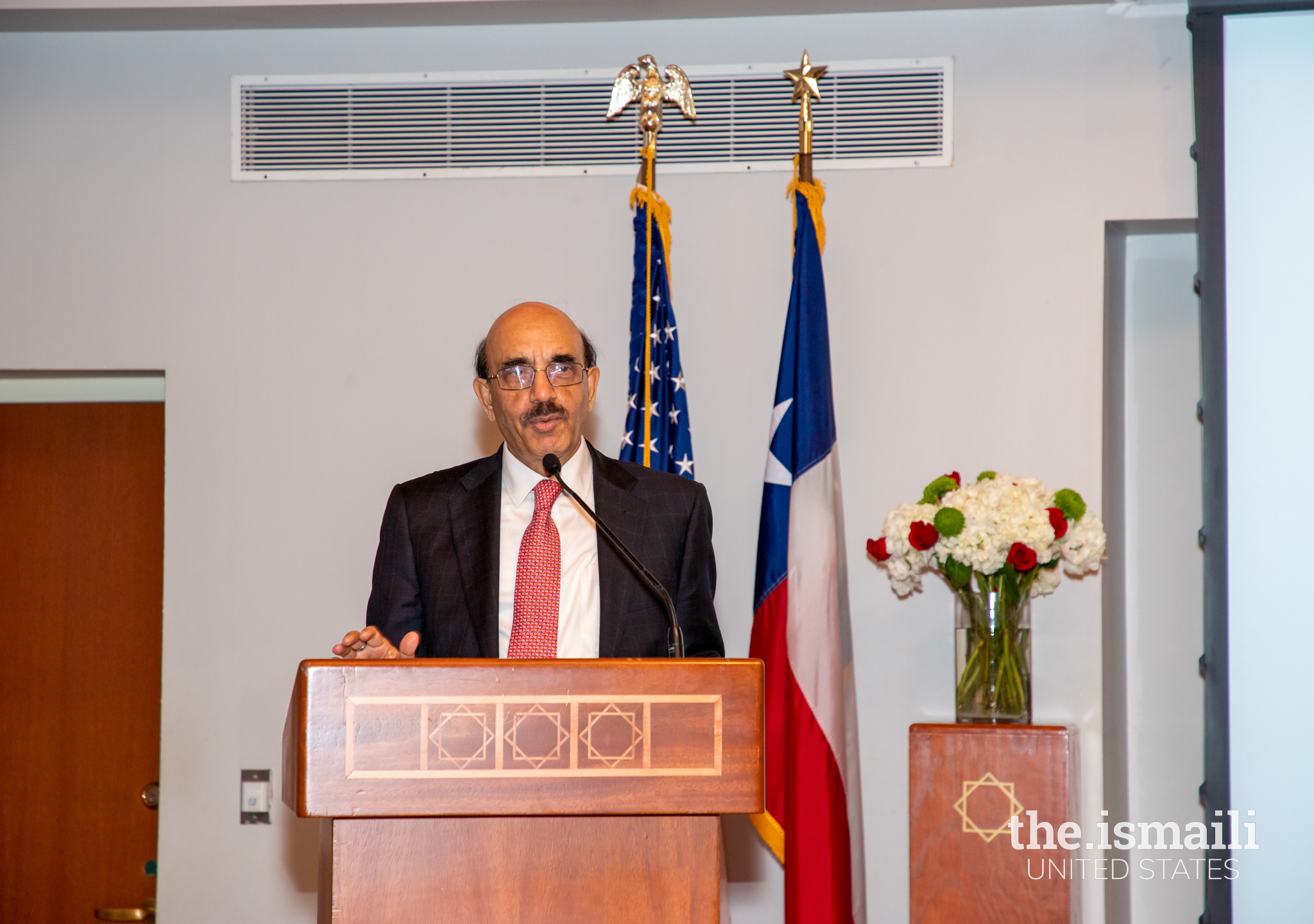 Remarks by Masood Khan, Ambassador of Pakistan to the United States.

Newly-appointed Ambassador of Pakistan to the United States, Masood Khan, also attended the event in Houston and acknowledged AKU’s contributions as a national asset to Pakistan’s social and economic development. He quoted a recent study showing the impacts of this non-profit institution, including public benefits that are felt across the country. He also lauded the university’s leadership for creating an annual economic impact of over $1.2 billion in a year.

A luncheon hosted by the Ismaili Council for the Central United States welcomed Texas Secretary of State John B.Scott, to the Ismaili Jamatkhana in Plano, introducing the contributions of the local and global Ismaili community. Dr. Shahabuddin spoke of AKU’s role in providing education and training to over 18,000 graduates, most of whom have received financial aid to access a world-class education.

Dr. Shahabuddin also explained the university’s role in empowering women – who comprise approximately two-thirds of its graduates and over half of its faculty – by setting new standards of academic excellence in a community that values each individual. He stressed AKU’s role in providing medical care to over two million patients annually through its seven hospitals and 340 global health care facilities, giving credit to the university’s donors, volunteers, and international partners, including the Bill & Melinda Gates Foundation, UNICEF, WHO, and partner universities.

In the Southeastern United States, as in other regions, Dr. Karmaliani met with School of Nursing and Midwifery alums who are leaders in nursing at numerous medical centers across the United States. An AKU graduate, Dr. Karmaliani commended the far-reaching impact of and high regard for AKU nurses as confident, hard-working, and adaptable problem solvers that the world needs. She also encouraged alums to return to their alma mater to deepen their engagement and help more AKU students fulfill their dreams of higher education. 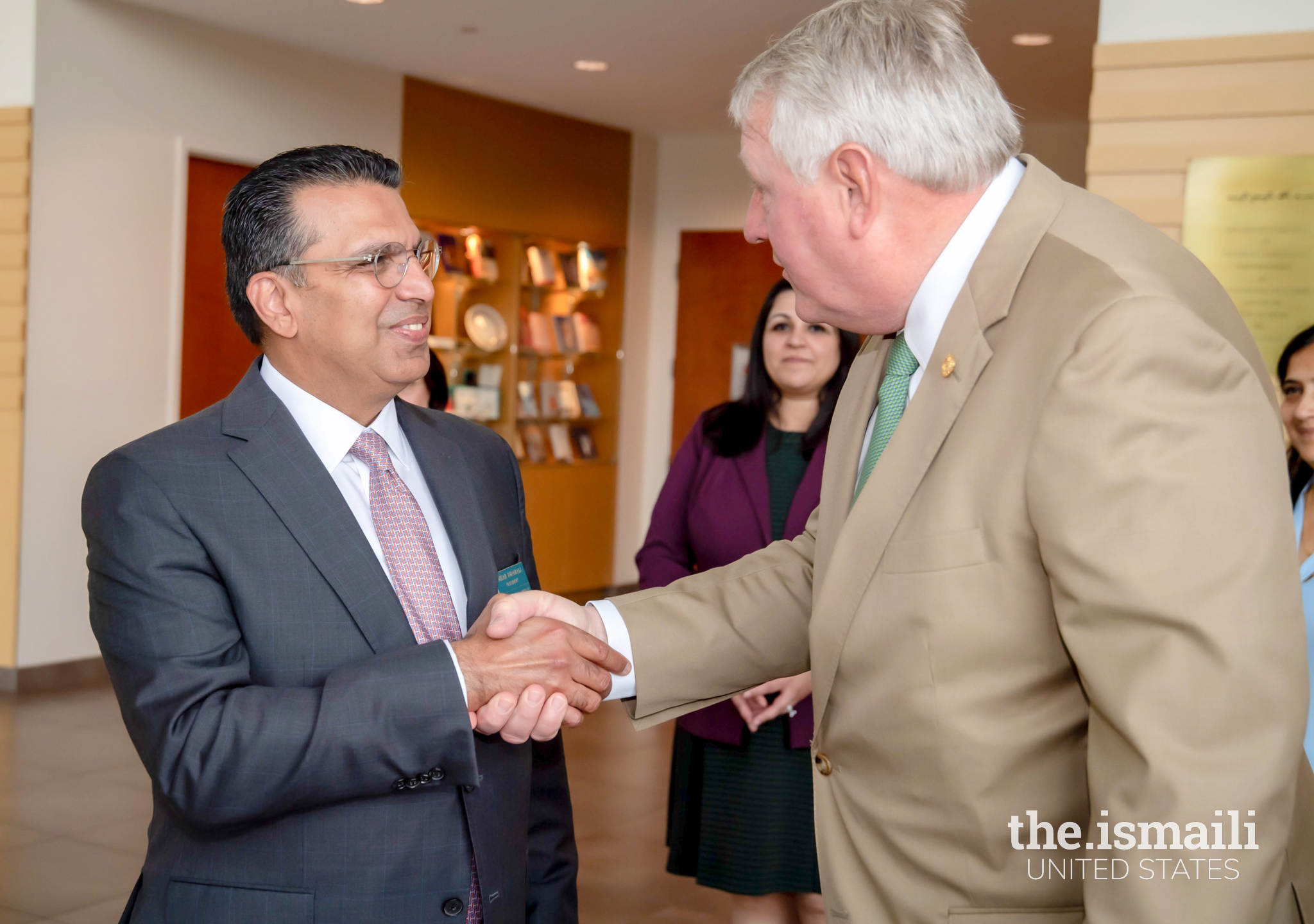 President of the Ismaili Council for Central USA, Nizar Didarali, greets Texas Secretary of State John B. Scott at the Ismaili Jamatkhana Plano.

At the various venues, Dr. Shahabuddin referenced Mawlana Hazar Imam’s vision for AKU to be an educational institution that promotes knowledge and helps solve global problems. The president cited issues including poverty, disease, gender inequality, lack of quality education, and climate change, all of which the AKU addresses.

Emphasizing the essential role of universities, Dr. Shahabuddin quoted Mawlana Hazar Imam’s speech at the inauguration of AKU in 1985, where he said, “More than perhaps any other contemporary type of institution, universities can provide a forum in which a creative, enquiring, and logical approach can be made to the significant issues of the time.” He also referenced the Imamat’s tradition of establishing institutions of higher learning dating to Al-Azhar University, founded in Cairo in 970 AD by the Fatimid Imams.

Audiences were educated about the exponential growth of AKU from a single campus in Pakistan to multiple campuses operating in six countries, including Afghanistan, Kenya, Tanzania, Uganda, and the United Kingdom. Initially focused on nursing and medicine, AKU now offers 18 degrees, diplomas, and numerous residencies and fellowships.

AKU alumni have become leaders at home and abroad and play an important role. Dr. Shahabuddin cited that the U.S. is currently home to over 2,000 AKU alumni, most of whom serve as nurses and physicians. Many return to AKU and their home countries after international training to spread the knowledge and skills they have acquired.

A key player in health promotion across Asia and Africa, the university is working under the broader Aga Khan Development Network umbrella to curb the threats of climate change and achieve carbon neutrality by 2030. Dr. Shahabuddin quoted Prince Rahim Aga Khan, who recently said, “The WHO sees climate change as the greatest threat to human health in the 21st century…There is a special role for the Aga Khan University to play in mitigation and adaptation efforts.”

Looking ahead, there is much excitement about the future of AKU. Beginning in 2023, the Faculty of Arts and Sciences in Karachi will offer a liberal arts and sciences education in humanities, social sciences, and natural sciences. Newly-established and upcoming AKU Cancer Centers in Kenya and Tanzania aim to revolutionize cancer screenings, treatment, and research in East Africa.

Separately, the university is launching undergraduate programs in medicine, surgery, and nursing in East Africa and establishing a new campus and hospital in Kampala, Uganda. AKU also plans to partner with Aga Khan Health Services in India to develop new facilities for the Prince Aly Khan Hospital in Mumbai, originally founded in 1945. 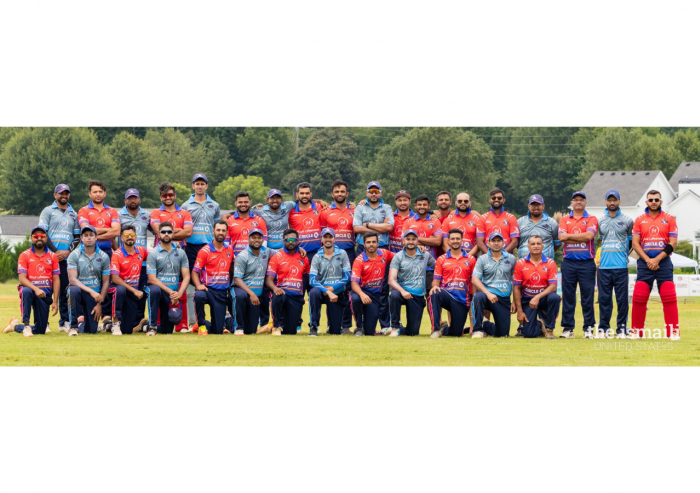 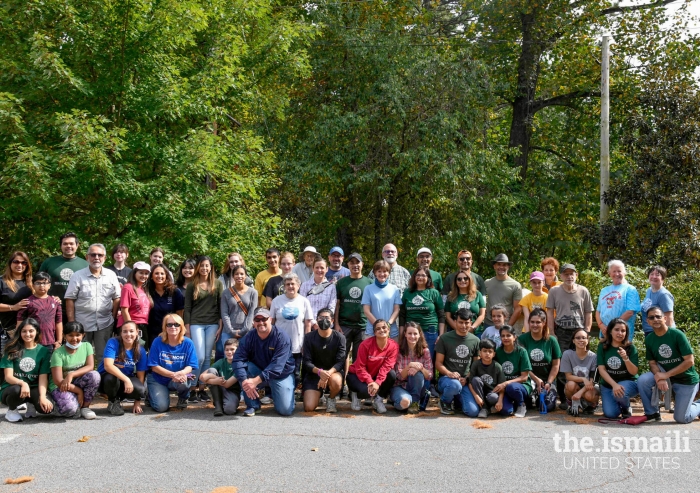