Skip to main content
The.ismaili > UK > About > About the Ismaili Community in the United Kingdom

The lsmaili Community has had a well-established presence in the United Kingdom over the past half century, comprising of over 15,000 men and women from all walks of life, including professionals, entrepreneurs and students from diverse cultural backgrounds. The community in the UK and Europe represents diverse cultural backgrounds; predominantly from East Africa, the Indian sub-continent and increasingly from Central Asia & the Middle East.

In the UK, Ismailis are known for their strong ethic of service. In keeping with the values of the faith, a large number of Ismaili Muslims give their time, knowledge and material resources within the community as well as to wider society, on a voluntary basis to improve the lives of those less fortunate. It is common within the community for individuals of all ages to give time to such endeavours as school governors, magistrates, running marathons for charity etc. Approximately 700 Ismailis participated as Games Makers during the London Olympics and over 2000 members of the community actively volunteer within the community in teams concerned with the social welfare, the health, economic status, well-being and education of the community.

The community comes together regularly for prayer as well as for social, cultural, educational and other activities. A small number of well-designed places of gathering have been built for these purposes, known as Jamatkhanas. The best known and the largest being the Ismaili Centre in London, opened in April 1985 by the then Prime Minister Margaret Thatcher. Ismaili Centres serve not only as a place of gathering for Ismailis, but also as active participants in local society, sponsoring a variety of cultural initiatives such as exhibitions, lectures and other public events. Examples from London include Exhibition Road Music Day, the Nour Festival etc.

Globally, the community has become recognised through the institutions of the Aga Khan Development Network (AKDN) for its extensive involvement in the support of philanthropic and social development endeavours benefiting disadvantaged populations in the developing world. These institutions work for the common good of all citizens, regardless of origin, gender or religion. Their individual mandates range from architecture and culture, to health, education, and the promotion of private sector enterprise and rural development. 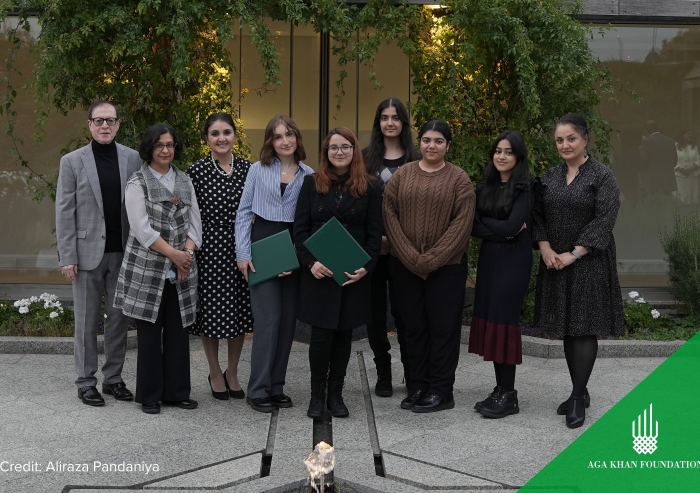 Celebrating the winners of the illuminate 2022 Multimedia Essay Competition