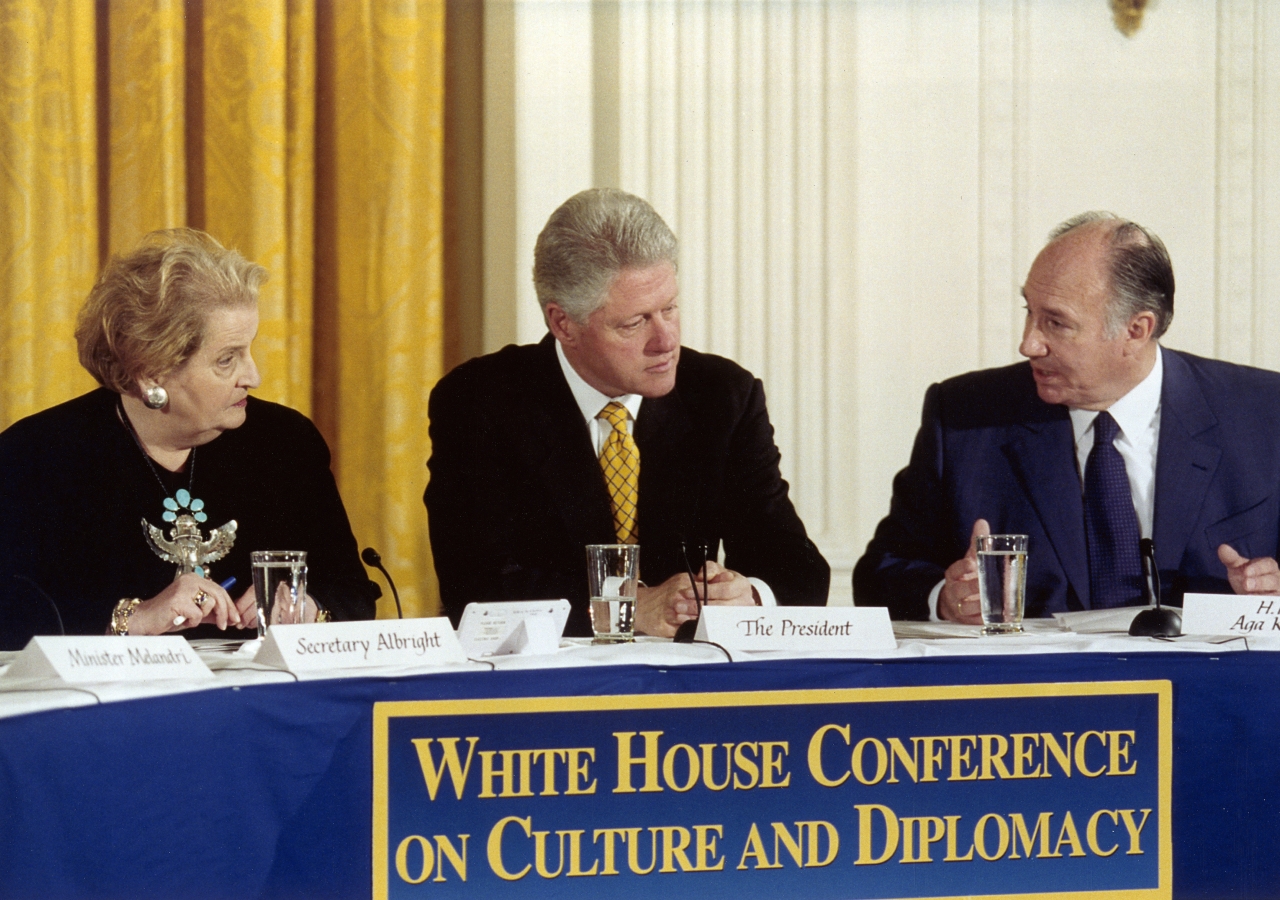 Thank you Mr. President. It is an honour to be associated with this distinguished panel in a discussion of a topic which I have long felt has received too little attention, particularly at the policy level. Thank you for the invitation.

I offer my comments this morning from the perspective of someone who has been a long-standing observer of cultural evolution in the developing world of Africa and Asia, and from more than twenty-years of experience with activities such as the Aga Khan Award for Architecture that have attempted to make a positive contribution to that process.

At present there is a great deal of apprehension about the future of local and national cultures in most countries in the developing world. What can the cultural diplomacy of the United States do to address these anxieties and replace them with a sense of confidence through new and shared initiatives?

If the cultures and value systems of the developing world are being challenged -- or are believed to be under threat - I think it valuable to try to identify the nature of the challenges. For the sake of discussion, I would put the major issues under the headings of language, institutions, people, communications, and funding.

First, there is the issue of language. During the process of de-colonisation in Asia and Africa, the driving objective of the governments of the newly independent countries was to create nation states. A national language was seen as an important part of this process. Forty years later, the world's dominant foreign language, English, is viewed as a necessity in most areas -- but not yet as an opportunity. For cultures in the developing world to be globally accessible, understood, respected and admired, and to be represented in electronic communications, they must ensure that their cultures find expression not only in the national language, but also in English.

The second issue is institutions. In most parts of the developing world institutions and places of particular importance to cultural inspiration and expression are all too often abandoned or neglected by both governments and civil society. Museums, conservatories, and buildings and public spaces in historic cities are generally in a precarious state. This is also true of higher education, particularly in the arts and the humanities. In their present state these institutions cannot contribute to the survival and reinvigoration of inherited value systems, and may actually contribute to their further degradation.

The third issue is people. Culture is by its nature rooted in people. Unfortunately, in the countries of Asia and Africa which I know, cultural expression as a life-long vocation nearly always leads to a dead-end. Artists in the industrialised world at least have the possibility of mobilising the resources necessary to live with dignity. The economic environment for cultural professionals in the industrialised world does not exist in the developing world. Indeed it is being weakened further by the collapse of traditional value systems and the cultural production they supported.

The fourth issue is communications. Cultures that do not or cannot communicate become increasingly isolated, inward-looking, and, in due course, marginalised. Some would argue the United States' dominance of global communications systems is, because of what has been called the digital divide, a contributor to this problem. I would offer a different perspective. It seems to me that by a purposeful effort, the United States could play a significant role not only in making the cultures of Asia and Africa available globally. Doing so would also make a massive contribution to the full acceptance to the legitimacy and value of social and cultural pluralism, something that is urgently needed in most parts of the developing world.

The last issue is funding. The reality in the countries of Asia and Africa is that the material resources required to sustain cultural activities are either not available because of higher priorities, or because there are no incentives to support culture. But with their economies becoming increasingly liberalised, an increasing percentage of national wealth being will be created by private initiative. It is my dream that private individuals and organisations will come to the support of culture, as has been the case for centuries in the industrialised world. For this to happen, many new methods of giving will need to be stimulated and developed through appropriate public policies.

In response to the challenges facing countries in Africa and Asia that I have outlined, the United States, with a wealth of educational, private philanthropic institutions and global corporations that is unparalleled in human history, can play a leadership role. Specifics can be discussed later this morning or in this afternoon's sessions. Much very important work devoted to the issues of language, institutions, people, communications and funding is already underway, but there is scope, and I would say a need, for a massive expansion.

It is my hope that this meeting will lead to a re-conceptualisation of the role in culture in public life and international policy and move more public and private institutions to initiate or expand their activities devoted to the support of culture. I can assure you that you will find interested and reliable partners in the parts of the world with which I am familiar to join you in this process.