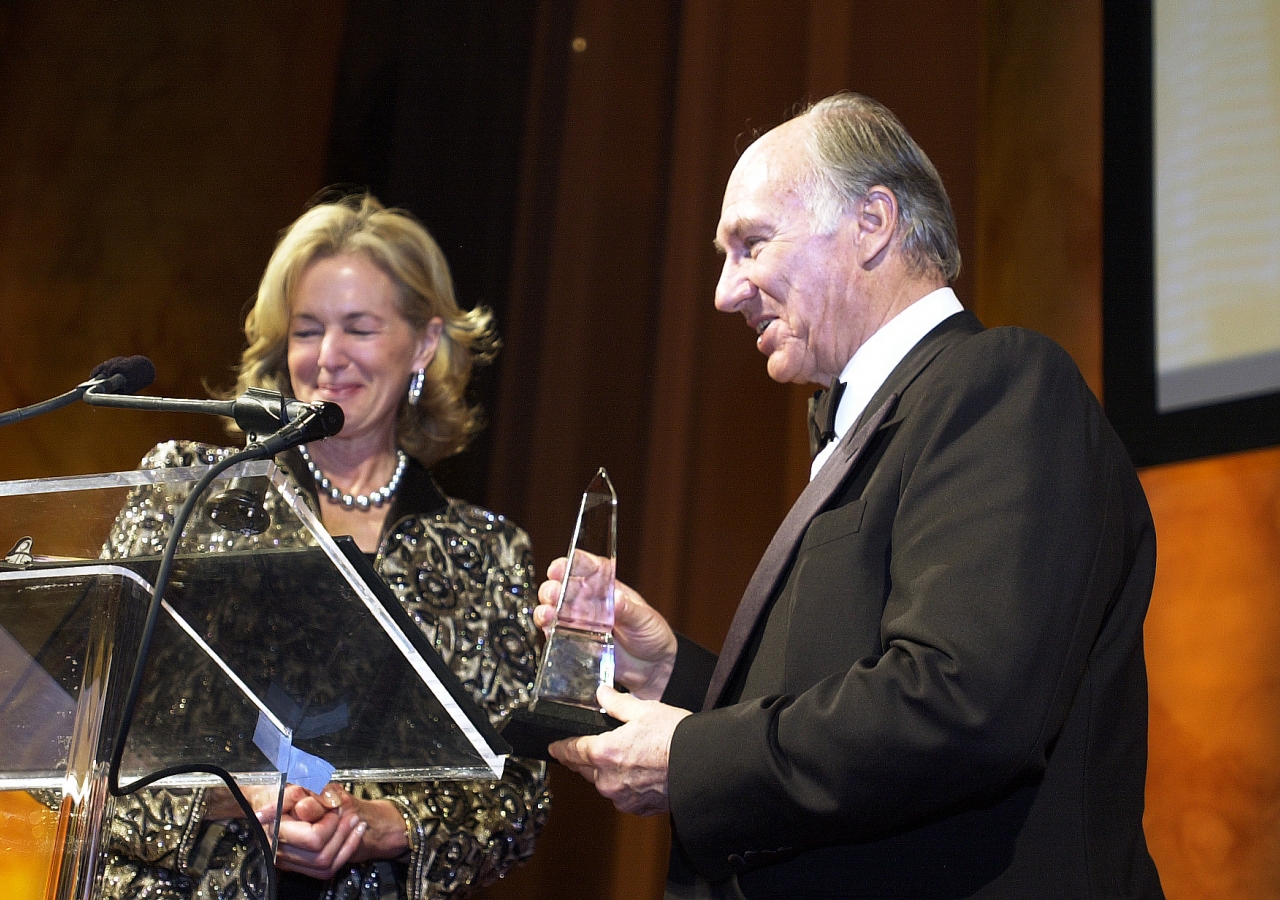 First I would like to thank Charles Correa and Jim Wolfensohn for their kind words.

Charles, through your work you have made an immense contribution to the built environment. Your buildings have brought timeless elegance to societies in the East and the West. Your inspirational use of their many languages of design will speak powerfully to many generations hence. I would also like to sincerely thank you for your contribution over many years to the Aga Khan Award for Architecture, as a member of five different Steering Committees, a Master Jury and as an Award winner yourself in 1998.

Jim Wolfensohn, you have changed the very nature of the World Bank, creating an ethic that recognizes that the development of individuals and communities are as important as return on equity.

Hundreds of millions of people around the world, faceless and desperate in their poverty, may not know, but should know, that you have seen their plight and have heard and understood their needs.

You have been successful in harmonising the activities of the World Bank and the International Monetary Fund which has made both more effective in achieving their respective goals. And you have been an ecumenical leader in building bridges between and among faith-based organizations and recognising their importance in international development.

Ladies and gentlemen, thank you for your presence here this evening.

And thank you to the National Building Museum for honouring me with this recognition. I am humbled to receive an award carrying the distinguished name of Vincent Scully. His work as a teacher and critic has reminded the world of the importance of a humane architecture that both respects the past and embraces the future.

I might add that my only regret, as a Harvard man, was that Mr. Scully chose to do so much of his work at Yale.

Ladies and gentlemen, some 30 years I began to question why architecture in the modern Islamic world seemed to have lost touch with the great achievements of its past.

I began working with leading architects, philosophers, artists, teachers, historians and thinkers -- from all religious faiths -- to establish an Award for Architecture. We sought to reshape and reposition knowledge and taste in the public psyche and to change the behaviour of the vast range of actors who shape the built environment.

Now some 28 years later, the extent to which we have been successful is due to a multitude of individuals and organisations from all regions, faiths and occupations. They have been cemented together by their mutual commitment of service to people through the contribution of time, talent and knowledge.

It is on behalf of this broad spectrum of qualified men and women that I accept the Vincent Scully Award this evening.

These include members of the nine Award Steering Committees and Master Juries. From the beginning, they pushed the notion of architecture far beyond the act of building and technical perfection. They were concerned with quality of life, social justice, pluralism, cross-cultural exchange, education, the proper use of resources and corporate responsibility.

Thank you to William Porter, former Dean of MIT’s School of Architecture, for a persistent advocacy of community responsibility and to Ukrainian Oleg Grabar, from Harvard and Dogan Kuban, from Istanbul, who brought depth to the Award’s understanding of the traditions of Islamic Architecture.

Robert Venturi helped the Award address popular expressions in architecture. Frank Gehry has been an adamant supporter of social responsibility. Peter Eisenman and Charles Jencks helped us involve younger talent and fresh ideas as did Glenn Lowry from the Museum of Modern Art of New York. Renata Holod of the USA and Canada and of Ukrainian origin, helped us build the foundation of Award procedures, seminars and field visits. Saïd Zulficar, Secretary General of the Award from 1981 to 1990, helped to further refine our procedures, and to deepen the Award’s interest and presence in contemporary societies where Islam had historically been at the forefront of architecture and learning. Suha Özkan now the longest serving Secretary General of the Award, has helped us gain momentum for the future.

The many other architects, planners and thinkers who contributed are a pluralist microcosm of the world itself. And here is just a partial list: Kenzo Tange, Fumihiko Maki and Arata Isozaki of Japan, James Stirling of the United Kingdom and Zaha Hadid of the UK and Iraq, Kenneth Frampton of the UK and USA, Balkrishna Doshi of India, Moshen Mostafavi of Iran and the USA and Farshid Moussavi of Iran and the UK, Elias Torres Tur of Spain, Glenn Murcutt of Australia , Muhammad Yunus of Bangladesh, Geoffrey Bawa of Sri Lanka, Alvaro Siza of Portugal, Jacques Herzog of Switzerland and Billie Tsien of the US. And there are many more.

I know of no process where so many people of such different backgrounds have come together to improve the living conditions of more than one billion people.

Thank you to the more than 1000 nominators worldwide who have brought such a diversity of projects to our attention. Thanks also to the dozens of highly-qualified reviewers who conducted the in-depth analysis of short-listed projects to enable the judges to assess them impartially.

Finally, my most heartfelt thanks go to the thousands of architects, builders, designers, financiers and planners who had the inspiration, creativity, and most of all, the patience and determination, to bring so many worthwhile projects to completion.

There were 2,261 such projects in 88 countries that made our short lists over the last 27 years.

They are the living proof that the built environment can truly be what we want it to be.