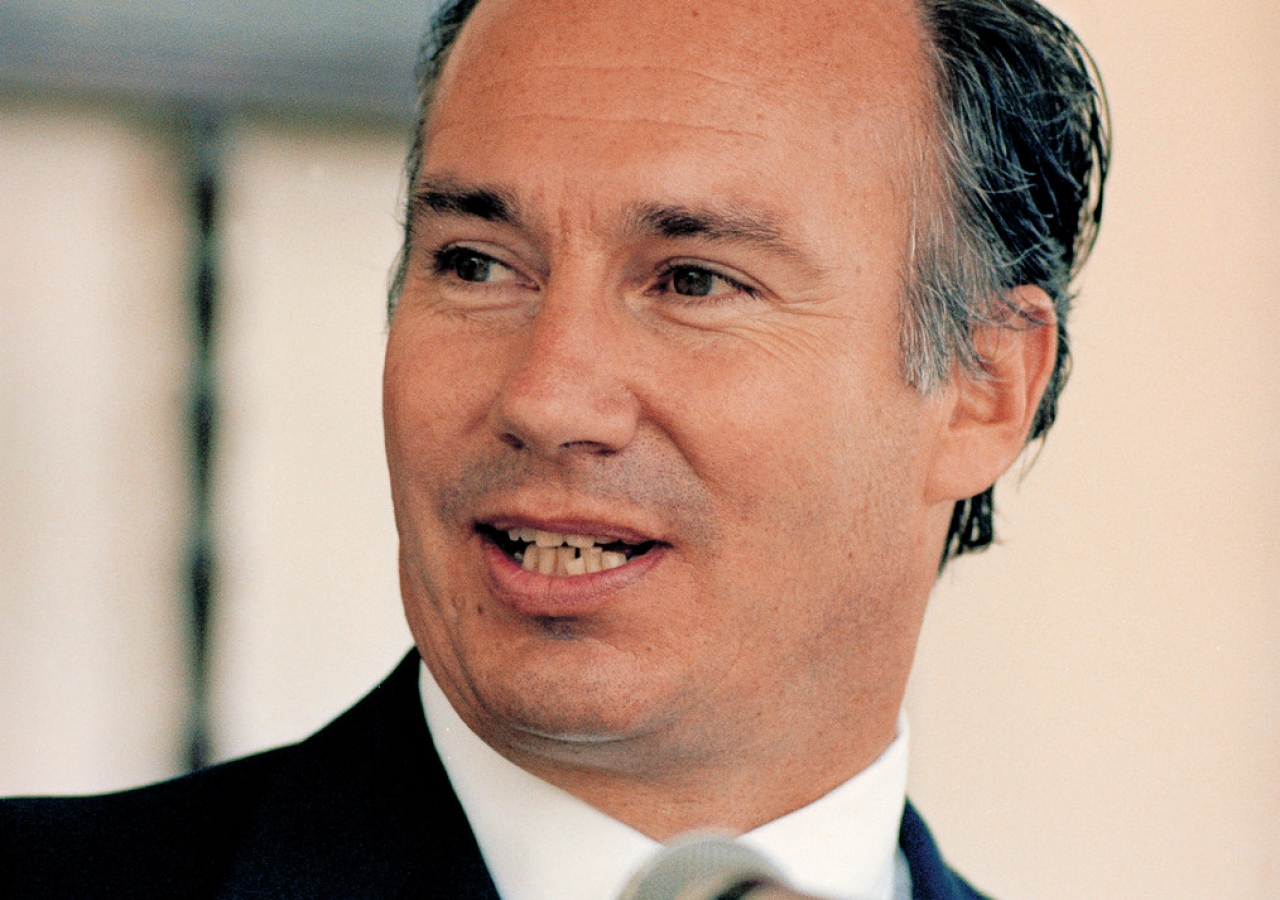 The private sector in economic development

It is a double pleasure to address so distinguished an audience of Kenyan Government and business leaders this afternoon: doubled because this is also the first visit of my world tour to celebrate the 25th anniversary of my accession to the Imamat. My grandfather, Sir Sultan Mohammed Shah Aga Khan would, I am sure, be proud to see the progress of the companies who are our hosts at this luncheon, as two of them, Jubilee Insurance and Diamond Trust, were founded by him. The two companies were in fact established at the time of his Golden and Diamond Jubilees respectively to advance the economic development of the Ismaili Community.

In those days, I need hardly remind you, Kenya was a Crown colony and the British administrators encouraged each community to develop its own separate institutions. Kenyan society was almost totally compartmentalised on racial lines.

In the intervening years, independence changed the situation dramatically and our own community institutions have changed too. Today they operate in the mainstream of the nation’s commercial activity.

Our other hosts, Nation Printers and Publishers, Industrial Promotion Services and the Serena Group, are relative newcomers having been set up by me after I became Imam. The fact that they have done so well is a source of great joy and I thank them for their kindness and consideration in hosting today’s luncheon.

Since you are all concerned with commercial activity, I feel I should comment briefly on the after-effects of the unhappy events of August 1st, in which in addition to the tragic loss of life many in the business community suffered severe material losses. Although order was quickly restored by the Government of His Excellency President Daniel Arap Moi, these events were a very earthshaking experience for all citizens of Kenya – earthshaking both psychologically and figuratively. If the earth is shaken around the roots of a democratic society, then immediate action must be taken to restore the soil, or the plant of democracy will die.

I, therefore, welcome President Moi’s recent plea for assistance to business which suffered on 1st August and his further assurance that the Kenyanisation policy is not intended to be discriminatory against any race or community and his firm statement yesterday evening that all Kenyans, irrespective of their origin, race or religion, will continue to enjoy the rights guaranteed in the Kenya Constitution. This follows in the footsteps of policies established by Mzee Jomo Kenyatta, whose strength and courage in the defence of democracy were an example to the whole of Africa, and I fully endorse President Moi’s call for all to work together to help build a stronger Kenya.

I referred a few moments ago to this being the 25th anniversary of my assuming the leadership of the Ismaili Muslim Community. Although some of you are already well informed about the Ismailis, it may be appropriate for me to say a few words about the office which I hold.

Ismailis are Shia Muslims who believe that the successor to the leadership of the Muslim Community, after the death of the Prophet Mohammed, was the Prophet’s cousin and son-in-law, Ali, and that this leadership, in both spiritual and temporal matters, was to continue by heredity through Ali in the Prophet’s family. Today, we are one of the few Shia sects led by an hereditary Imam, my grandfather having been the 48th and I myself being the 49th.

Ismailis live in over 25 different countries, including India, Pakistan, Syria, the United Kingdom, the United States, Canada, and of course, Kenya. In all these countries they are minorities and this is, no doubt, one of the reasons why private initiative has always played such an important role in their lives.

My own involvement with this private enterprise, which may seem curious to those raised in the Christian ethic, derives from the fact that Islam is a total religion touching on all aspects of a Muslim’s life. Therefore the Imam, whilst caring first of all for the spiritual well-being of his people, should also be continuously concerned with their safety and their material progress. He is involved in the encouragement of enterprise, though in the spirit of Islam, he must warn that it is unacceptable without a social conscience.

Here I must emphasise the institutional nature of both my grandfather’s and my own role in initiating Third World investments. The criteria applicable to these (investments) are not those of private business, but of an important Muslim institution concerned substantially more with economic development than simple entrepreneurial profit.

Nonetheless our investments, although within the framework of national economic development planning, are not parastatal and are not intended to require continuing subsidies. The aim rather is that the benefits of their commercial performance should be re-circulated within the Third World, thus assisting the material well-being of which I have just spoken. Necessarily the social service institutions, as opposed to those who are our hosts today, do often require subsidising.

In the economic sphere, we are making moves of considerable significance. As has already been mentioned, two of the organisations who are our hosts today – IPS Kenya and Diamond Trust of Kenya – have recently announced plans involving major re-structuring and a re-orientation of their respective activities. In each case influential new shareholders, foreign and local, are bringing in both expertise and substantial fresh capital. Such joint ventures between private and governmental institutions from both the developed and the developing world illustrate how new concepts of collaboration can be realised in practical terms.

Just as our social institutions today devote the majority of their activity to benefiting other communities, so have our commercial groups widened the base of their involvement. Two thirds of the Jubilee Insurance’s business is with non-Ismailis, while over 80 percent of the Diamond Trust’s loans are to members of other communities.

The development of effective financial and capital markets is also essential if private enterprise is to play its full role in the economy. Here Kenya is fortunate in already having a good institutional framework on which to build. Already two of the five commercial groups with which I am associated are quoted on the Nairobi Stock Exchange and it is my sincere hope that the others will follow the same path in due course, since broad based local ownership is another factor to which I attach considerable importance.

However, both foreign and local investors should understand and respect the requirements and priorities of Government, because Governments in the developing world have an obligation to ensure that scarce resources are channelled into areas where they will be most productive.

This said, Governments should equally endeavour to provide the climate for such collaborative investment. I call this an ‘Enabling Environment’, that is to say the combination of confidence, of security and a philosophy and application of law which will enable commerce to flourish. It is now more than ever in the interests of Governments to create this enabling environment. Let me explain why.

Twenty-five years ago, when I assumed the responsibilities of the Imamat, the wind of change was blowing through Africa and change, both political and economic, did follow. Some developing countries sought to strengthen their newly won independence by taking total control of the key areas affecting their national life, even if this meant expropriating businesses and property. International aid was readily available. Different benefactors could be played of one against each other. Political ambitions could be indulged without reference to economic reality. One result is noted in the latest annual World Development Report of the World Bank, made public last month. This shows that in the 1960s and 1970s nine African countries showed a decline in gross national product per capita. A decline despite the aid they received. Eight showed an increase in GNP of only one percent a year. In more than half of the countries of Africa the average person found his situation either worse or only slightly better than at independence.

But the wind does not blow in the same direction for ever. With the present recession in the industrialised countries, a cold blast is cutting into aid budgets for the developing nations and the international banking system is under severe strain. Even where aid levels can be maintained, inflation reduces the value in real terms. Explosive population growth means that what remains is distributed more thinly. Rising oil prices have savaged scarce reserves of foreign exchange, while falling commodity prices and the rising cost of manufactured imports further attack the budgetary planning of the developing nations. Even countries with significant oil and mineral resources are running into trouble.

Unhappily the impact of these factors falls far more heavily on the developing nations than on industrialised countries, whose economies are better able to ride out the stormy effects of recession.

Because of the wisdom of its policies and the stability of its institutions, Kenya has fared better than most other African nations. Nonetheless, the message is still clear. As President Moi noted in his September 21st speech, private investment, both local and foreign, will be essential if this country is to maintain the momentum of its development and I welcome his undertaking yesterday evening to provide the necessary incentives for it.

What have we learnt from our experience about encouraging private sector investment? First, perhaps, that a positively enabling and constructive environment is essential. Investment and enterprise, at least the kind of long-term investment which the Third World needs, requires political stability, democratic institutions, a framework of law which protects all citizens and a constant dialogue with Government and parastatal organisations on national objectives. This is the environment which enables business to develop and benefit the entire nation.

Given this Enabling Environment, private initiative can go much further than simply developing material resources. It can help develop a nation’s human potential. It can explore how best high technology can be adapted to local circumstances. It can create and consolidate an indigenous entrepreneurial class, with the managerial skills and organisational structures necessary for effective business growth. In other words, it can participate in forging the human capital, which is the bedrock of a nation’s development.

Bringing together the best what private initiative has to offer from various nations has many attractive aspects to developing countries. Individual financial and monetary risk is reduced, the sources from which to draw qualified manpower are multiplied and political acceptability is increased. Public, or State owned, enterprises can never be a complete substitute for private enterprise in building a nation’s economy and in bridging the development gap.

What local and foreign investment can achieve is exemplified by the growth of the companies who are our hosts this afternoon.

During the first twenty years of Kenya’s independence these companies have been transformed from small entities serving a specific segment of the nation’s population into national entities with influential international associates, many of whose representatives I am delighted to see among the audience this afternoon.

If, as I hope, an Enabling Environment is maintained here through the next two decades then I am confident that these companies will broaden their horizons still further in both human and capital terms, achieving greater international status and contributing powerfully to Kenya’s future.