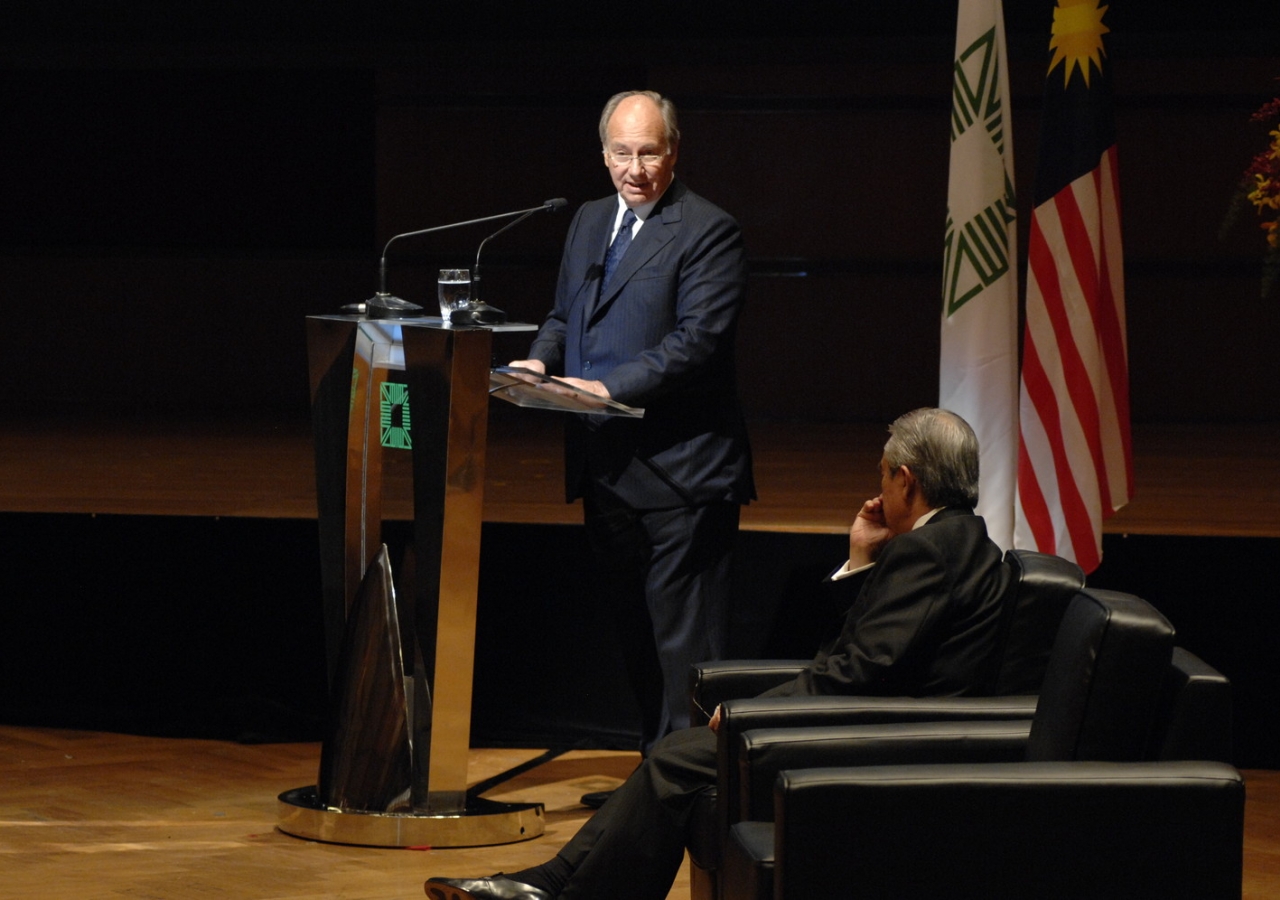 Presentation ceremony of the 2007 Aga Khan Award for Architecture

What a great pleasure it is for me to greet you today, as we present the Aga Khan Award for Architecture. This is an event we await with great anticipation as it comes around on the calendar every three years. It is the culmination of a wonderful process of discussion, research, exploration, and deliberation - one that has involved, through the years, nearly 8000 nominated projects and tens of thousands of participants, in some 88 countries. I think of the Award not as an event but as a process - and my thanks go out to all of you who have been a part of it.

To begin with, we join our Malaysian friends in celebrating the 50 th anniversary just a few days ago of the Malaysian Merdeka. Anniversary occasions are valuable opportunities to reflect on the past and to plan for the future. The Malaysian people have had good reason this past week to look back with pride, and forward with hope. I am particularly pleased that we can welcome and congratulate the Prime Minister and his wife at this special moment in their nation’s history.

I often reflect back on that period in the late 1950’s, when so many developing countries were suddenly gaining their independence. Those were the very first years of my Imamat - which, as you may know, has also marked its 50 th anniversary this summer. I recall both how excited and how sobered we were as we thought about the enormous challenges which then faced these newly independent nations - including Malaysia - as they worked to develop effective new institutions which would give meaning to their freedom.

I also recall how our emotions since that time have oscillated between hope and frustration as the story of development has unfolded. But more and more, in many places, the story has become one of promise and progress. This is particularly true, of course, here in Malaysia. And it is most especially evident as we look out on the face of this city.

I doubt that even the most imaginative among us could have envisioned fifty years ago what Kuala Lumpur would look like today. Surely the transformation of the built environment in this city is among the distinctive and exciting urban transformations in our lifetimes. More than that, the dramatic remaking of this city, so powerfully evidenced in the architectural realm, is all the more compelling because it expresses a profound transformation in the social and economic realms as well.

So again I would say that this is a good and appropriate place to gather this week - and a very appropriate time to be meeting.

Our common purpose today is to honour excellence in the field of architecture, as we have defined it for the purpose of the Award - represented by the nine projects which the Master Jury has selected as the 2007 awardees. It is with deep sincerity and appreciation that I extend my warmest congratulations to all of you.

The imperative that we “honour excellence” could be misleading, however, if we define the architectural enterprise too narrowly. What we spotlight through this award is an all-encompassing sweep of human endeavour, shaping an infinite variety of human spaces

The spaces we had in mind in establishing this Award were broadly defined, encompassing places both public and private, enclosed and open, urban and rural, residential and commercial, cultural and industrial, intimate and grand, religious and secular.

And the categories of people we had in mind also were broadly inclusive. We recognize with enormous respect those who initially dream about inspiring combinations of shape and scale, pattern and colour, texture and volume, line and light. But we also honour those who express those dreams in tangible designs, or through inspired on-site articulations, as well as those who finance these projects, and those whose skills as managers and builders convert abstract ideas into physical realities.

In short, our definition of the words “Architects” and “Architecture” is very comprehensive.

As has been mentioned, this Award itself is marking one of those round-numbered anniversaries tonight - the 30 th year since it was created, the tenth completion of its triennial cycle.

A central concept when this all began 30 years ago was the power of Architecture to connect the past with the present and the future. It was my strong impression then that Architecture had largely abandoned the indigenous past - especially in Muslim societies and in the developing world.

Perhaps it was a natural tendency - the thought that if we wanted to speed up the modernization process, we should clear our minds, and even our landscapes, of what some saw as the dead hand of the past. But, in doing so, we often cut ourselves off from great well-springs of inspiration, power and moral authority.

This is one of the reasons our Award Ceremonies have normally been held in historically significant settings - reminders of just how rich our Islamic heritage has been.

Our venues were NOT meant to imply however that our goal was simply to reproduce the past. In fact, the projects we have honoured through the years - over one hundred of them - have invariably rejected simplistic, copy-machine approaches. The fact that we hold these current ceremonies in a contemporary setting - one which has itself been a recipient of our Award, symbolizes our faith that Architecture can not only link us to the past, but also propel us, creatively, into the future.

The past is not something to stand on, but rather to build on. If ignoring the past was a problem on one side, then the opposite danger was an exaggerated submission to the past, so that some creations and creators became prisoners of dogma or nostalgia.

There is a danger, in every area of life, everywhere in the world, that people will respond to the hastening pace of change with an irrational fear of modernism, and will want to embrace uncritically that which has gone before. The Islamic world has sometimes been vulnerable to this temptation - and the rich potential for a new “Islamic modernism” has sometimes been under-estimated.

The Aga Khan Award was designed, in part, to address this situation, encouraging those who saw the past as a necessary prelude to the future - and who saw the future as a fulfilling extension of the past. And, by and large through the years, this objective has been accomplished.

In my view, a healthy life, for an individual or a community, means finding a way to relate the values of the past, the realities of the present, and the opportunities of the future. The built environment can play a central role in helping us to achieve that balance.

One other area in which Architecture can play a connecting role is through the bridging of man and nature, between the natural and the built environments. For Islam particularly, this bridging objective is a religious imperative. The Quran commands us to be good stewards of Allah’s natural creation - even as we employ His gifts of time and talent to shape our surroundings. Neither environmental protection nor economic development can be long sustained unless both objectives are prioritized. They are part of a Common Agenda.

Finally, I might observe what you also know very well: the fact that architecture also connects people. I think of people of different ethnic, religious and political backgrounds, with different skills and temperaments, from different classes and social sectors - all of whom can come to understand one another better by experiencing one another’s architecture.

Finally, as we present this Award for the tenth time, we must ask ourselves what we have learnt from the past three decades, and what should be our sights for the future.

While we cannot present an in-depth analysis right now, I think we can begin by acknowledging that, more or less everywhere in the Ummah, Muslims and others are asking themselves the right questions and are developing positive answers about their built environment: Are we building for the future in a culturally empathetic way? Do we now own and are we marshalling the necessary creative resources - ranging from new schools of architecture to new data bases, through which the architectural community can share its questions and answers, its problems and its successes? This in itself is a magnificent change from 1977, when such simple but essential questions were generally not being asked, or had only negative answers.

Looking to the future, we are faced with the challenge of change on a more massive scale than ever before in the history of Islam. As we look ahead, we can predict a continuing, relentless urbanisation in countries which are now largely rural. In some areas of the Ummah physical development is occurring at a near industrial scale. We can also see new international partnerships linking development institutions from the industrialised world with those of the Ummah. And, happily, we can now welcome the steady emergence of new, highly talented generations of Muslims and non-Muslims who appreciate the heritage of world-class buildings and spaces which characterized the Ummah for so many centuries - and who understand the power of Islamic cultural well-springs to inspire continuing accomplishment.

The talents and insights of these new generations of young creative people will be an enormously valuable resource in the years ahead. It is essential that the decision makers of the Ummah and of their development partners should trust and embrace these new generations of architectural professionals. It is my deep conviction that if this is done, while errors may be made, the outcomes will surely include a sense of authenticity, inspiration, heritage and creativity which will restore to many areas of the Ummah a sense of the architectural greatness of its past. If that happens, then the impact on the physical environment of world civilizations, well beyond the frontiers of the Ummah, will also be profound.

I believe that the awards we present today will facilitate that process - and amplify its impact.

We are proud that you who gather here are among the strong supporters of this award. We salute you for that support, even as we thank you for your participation in this great anniversary event - in this distinctive and forward-looking city.