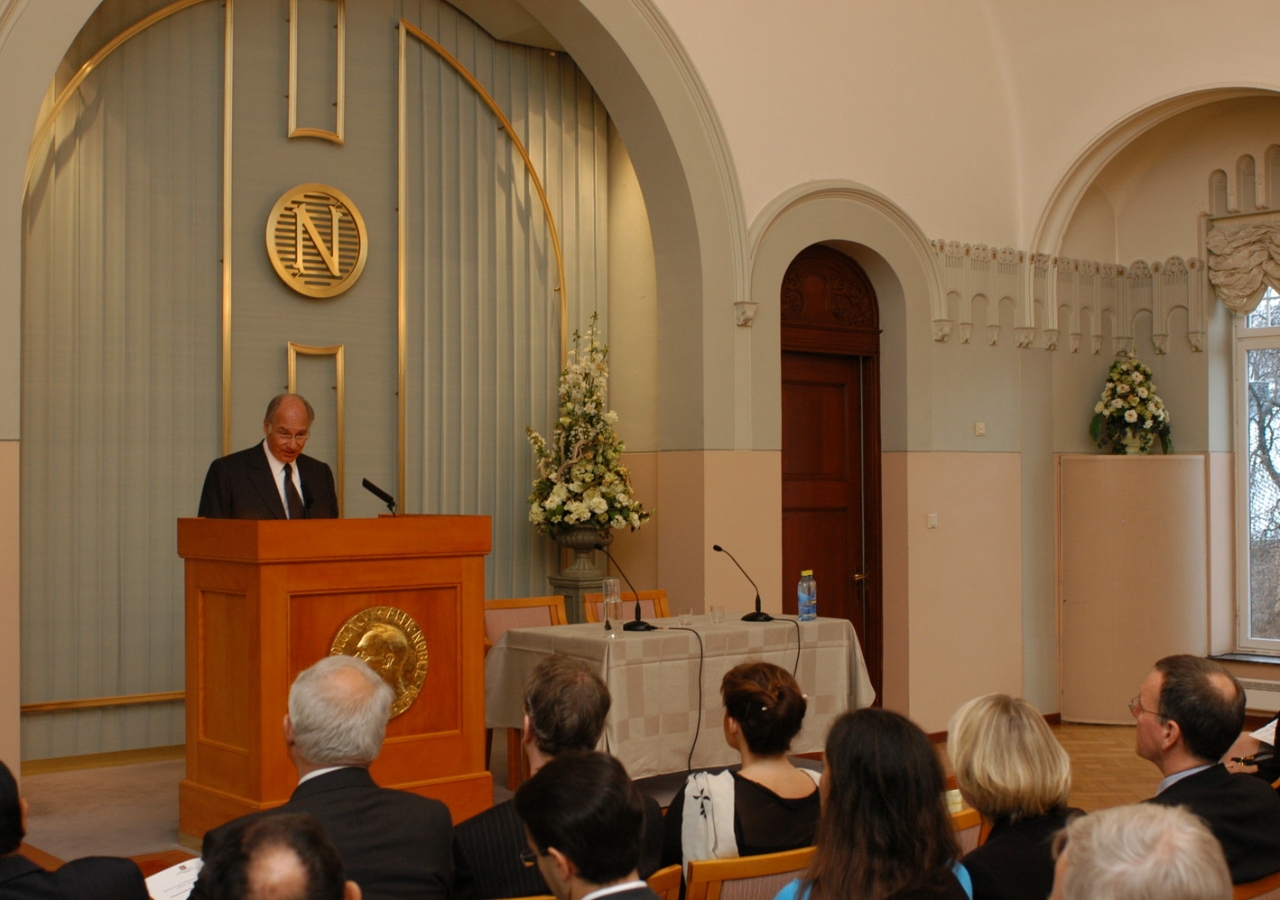 The Nobel Institute in Oslo

I thank the Government of Norway and Minister Johnson for the invitation to speak here this morning and for her generous words of introduction. Madame Minister, the exchanges we have enjoyed since we met yesterday has been highly constructive.

I am particularly honoured to be speaking at the Nobel Institute, respected worldwide for its promotion and recognition of exceptional endeavours to reduce human conflict.

It is also a rare privilege to address such a learned and experienced audience which includes not only officials in government charged with issues of human development, but also leaders of Norwegian civil society who are important partners in Norway’s impressive international development efforts.

In my remarks today I will propose to you several questions which I will attempt to go some way toward answering:

Before I begin, perhaps I can give you some background on my perspective.

My role in human development stems from my position as Imam or spiritual leader of the Shia Ismaili Muslims, as designated by my grandfather in 1957.

In all interpretations of Islam, Imams, whether they are Shia or Sunni, are required not only to lead in the interpretation of the faith, but equally to contribute to improving the quality of life of the people who refer to them. This dual obligation is often difficult to appreciate from the viewpoint of Christian interpretations of the role which Church leaders are expected to perform.

It is on this ethical premise, which bridges faith and society, that I established the Aga Khan Development Network. Its multiple agencies and programmes have long been active in many areas of Africa and Asia that are home to some of the poorest and most diverse populations in the world, serving people without regard to their ethnicity, gender or faith.

The community I lead of Shia Ismaili Muslims is culturally, ethnically and linguistically, very diverse. Their main concentration is in South and Central Asia, the Middle East and sub-Saharan Africa. In recent decades the community has also established a substantial presence in North America and Western Europe.

We have lived through colonialism and independence, two World Wars, the Cold War and many local and regional wars. We have seen the collapse of the Soviet Union and the birth of new states. The pendulum has swung from private ownership to nationalisation and back to privatisation. And we have lived in democracy and under dictatorship.

The community and its institutions are in many ways a microcosm of the last century in the developing world and we have learned many lessons.

Ladies and gentlemen, I put it to you that no human development initiative can be sustainable unless we are successful in achieving three essential conditions.

These three conditions are mutually reinforcing. Taken together, they allow developing societies gradually to become masters of the process and make that process self sustainable.

I will speak first about pluralism.

The effective world of the future will be one of pluralism, a world that understands, appreciates and builds on diversity. The rejection of pluralism plays a significant role in breeding destructive conflicts, from which no continent has been spared in recent decades.

But pluralist societies are not accidents of history. They are a product of enlightened education and continuous investment by governments and all of civil society in recognising and celebrating the diversity of the world’s peoples.

What is being done to support this key value for society and for democracy in Asia and Africa, to pre-empt catastrophe, rather than simply respond to it?

The Aga Khan Development Network intends to help create some permanent institutional capacity to address this critical issue through a Global Centre for Pluralism. It will be based in Ottawa to draw from Canada ’s successful record in constructing and sustaining pluralist civil society. The centre will work closely with governments and with academia and civil society around the world.

The centre will seek to foster legislation and policy to strengthen developing countries’ capacity for enhancing pluralism in all spheres of modern life: including law, justice, the arts, the media, financial services, health and education.

I believe leadership everywhere must continuously work to ensure that pluralism, and all its benefits, become top global priorities.

In this effort, civil society has a vital role. By its very nature, civil society is pluralist because it seeks to speak for the multiple interests not represented by the state. I refer, for example, to organisations which ensure best practices such as legal societies and associations of accountants, doctors and engineers. The meritocracy they represent is the very foundation of pluralism. And meritocracy is one of the principles of democracy itself.

Village organisations, women’s and student groups, micro-credit entities and agricultural co-operatives help give access and voice to those who often are disenfranchised.

Journalist associations also play a key role, explaining the political process, guarding against corruption and keeping governments accountable. Responsible reporting and competent comment on critical issues, and the hard choices that society must address, are an essential element in the functioning of a democracy.

Civil society organisations make a major contribution to human development, particularly when democracies are failing, or have failed; for it is then that the institutions of civil society can, and often do, carry an added burden to help sustain improvements in quality of life.

I believe strongly that a critical part of any development strategy should include support for civil society. I know that Norway supports this approach and works actively with its own civil society organizations to build capacity in the developing world. Twinning civil society institutions is a promising approach, to which the Aga Khan Development Network institutions and programmes are very receptive.

Let me turn now to the question of democratic governance. If we were to look at a map of the world that charted armed conflicts in the last 15 years, it would show that nearly two thirds have occurred in the developing countries of Asia and Africa. More than 80 per cent were internal conflicts, either full-blown civil wars or state-sanctioned aggression against minorities in those countries.

In nearly every instance, these internal conflicts were predictable because they were the culmination of a gradual deterioration in pluralist, inclusive governance. In too many cases – and I can speak here of our experiences in Uganda, Bangladesh, Tajikistan and Afghanistan – this sad but foreseeable turn of events has had severely adverse effects lasting more than a generation.

The question I have is this: if these breakdowns in governance were predictable, why was the international community powerless to get engaged at the early stages to help arrest the deterioration and avoid the suffering that resulted? Secondly, are there common factors in the majority of these situations which are insufficiently recognized?

I suggest to you that a major problem is that the industrialised world too often is severely lacking in credible information about the forces at play in the developing world.

This is not the occasion to analyse the historic causes of the deep ignorance that exists between the Judeo-Christian and Muslim worlds. But I am convinced that many of today’s problems could have been avoided if there had been better understanding and more serious dialogue between the two.

The issue of ignorance, or lack of solid information, and its impact on our world today, is illustrated by events in Iraq. No less deplorable is that the 9/11 attack on the United States was a direct consequence of the international community ignoring the human tragedy that was Afghanistan at that time. Both the Afghan and Iraqi situations were driven by lack of precise information and understanding.

My fundamental point is this: Since the collapse of the Cold War, the need has grown exponentially for the world’s leaders to be able to understand, and properly predict, what is likely to happen in parts of the world in which they previously had no reason to be involved.

The task of addressing this need cannot be met by the resources presently being engaged.

I note that Norway’s Minister of Foreign Affairs, Jan Petersen, spoke of this very problem just last week in Beijing. He called for the international community to provide assistance in governance for fragile states that is, and I quote: “more systematic, more strategic, more persevering and more reliable.”

My suggestion is to examine this question in depth.

Let me share with you some real world field examples. Just as we read about the supposed clash of civilisations, we read about so-called “failed states.” In fact, at least in my definition of a state, it cannot fail. What we are observing in reality is the massive failure of democracy around the world.

I estimate that some 40% of the states of the United Nations are failed democracies. Depending upon the definitions applied, between 450 million and 900 million people currently live in countries under severe or moderate stress as a result of these failures.

To me, therefore, a central question is why these democracies are failing and what can the world’s nations and international organisations do to sustain their competence and stability.

Let me now illustrate some specific issues which I believe are contributing to this fragility.

A number of countries in which we are active have opted to harness enormous resources to universal primary education, causing a significant under-expenditure on secondary and tertiary education. This educational policy originated from a number of ill-advised social economists in the early 60s.

Secondly, if governance is a science, as I believe it is, developing countries must educate about governance at secondary and tertiary levels. Otherwise, they deprive their intelligentsia of academic grounding in the critical knowledge of how democratic states operate.

A survey today in secondary schools or universities in Africa or Asia would find that “government,” as a subject in its own right, is either non-existent or given low priority.

It is clear that over the next decades, a large number of countries will be designing new constitutions, or refining existing ones, and new regional groupings will come into place. Many young democracies will spawn new political structures. But where are the men and women who will lead?

Just as education in governance is weak, the developing world continues to suffer from insufficient support to certain liberal professions which are critical to democracy. In my experience, the teaching profession and journalism are failing to attract the level of men and women who are essential for these liberal professions to make their appropriate contribution to democracy.

The challenge is therefore, clear. We must create the human and institutional resources to build and sustain young democracies.

As long as the developed world hesitates to commit long term investment towards education for democracy, and instead laments the issue of so-called failed states, much of the developing world will continue to face bleak prospects for democracy.

And the West should not discount that an accumulation of failed democracies could be a serious threat to itself and its values, capable of causing – if not conflict – deep under currents of stress among societies.

Ladies and Gentlemen, what seems apparent today is that the developed world must find the resources to provide consistent and meaningful assistance to fragile states struggling with democratic governance.

The world cannot sit by while countries spiral into crisis.

Some of the things we can do, I suggest to you, are as follows: