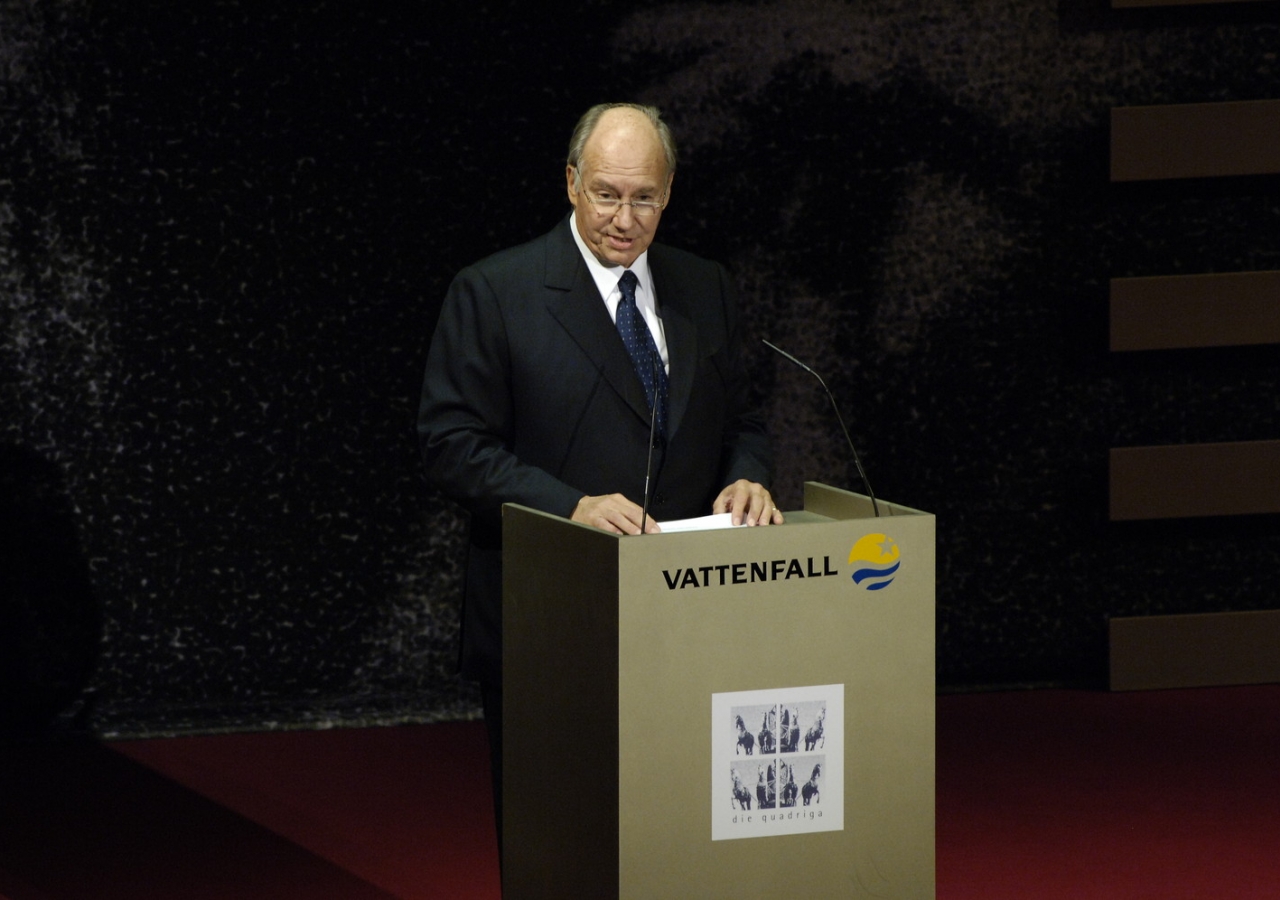 Let me mention at the outset why the Die Quadriga has such a special significance for me.

There is in today's ceremony a magnificent dimension which is the fact that the Quadriga Prize continually honours new stories --- and thus links a rich heritage to an ever-evolving future. The honour one feels in receiving the Award one year is profoundly reinforced the next year, as one presents the Award anew. Certainly that is my feeling today as we honour President Viktor Yuschenko of the Ukraine. Today his story now also becomes part of the Die Quadriga legacy.

The President's story is both personal and political --- built around enduring values as well as persistent challenges. It is the story of a leader who chose to serve others when service was inseparable from danger --- and who came to symbolize the hopes of millions.

President Yuschenko comes from a family of educators --- and he himself won academic distinction in the field of economics and finance. He developed the vital gift of a specialized expertise --- and he then devoted that expertise to the service of his country, helping to create its independent economy, its financial institutions, its new national currency, and its Central Bank. As the young leader of that Bank, he won the Global Finance award in 1995 as one of the world's top five Central Bankers. He went on to serve as Prime Minister --- as his country continued its economic progress.

Viktor Yuschenko became an expert in the ways that complex institutions work ---reconciling a pluralism of perspectives with a unity of purpose. It has been suggested that his personal passion for bee-keeping --- a family tradition for generations --- has been a continuing reminder from nature of how the harmony of a community can flourish when strong institutional habits respect a variety of social contributions.

Our honouree has also developed a close personal association with culture and the arts --- as a painter, sculptor, woodworker and collector in his personal life, and as a public defender and promoter of Ukraine's cultural heritage --- especially those art forms which are rooted in the history of the Ukrainian countryside and the hearts of the Ukrainian people. His public service has been an expression of his patriotism --- his love for his country's past, his dreams for its future.

Yet another aspect of our honouree’s personal and professional story is his conviction that the future lies with the forces of popular sovereignty --- with the progress of freedom and democracy. And these are not abstract values for him --- they include a working commitment to the institutions that make democracy possible --- a credible election process, for example, reliable judicial systems, and a strong commitment to Freedom of Expression --- including the vital role of an independent press.

Just as the long drama of German reconciliation reached its climax on this day in 1989, so the recent story of Ukrainian freedom centres on two landmark events. The first came on July 16, 1990 --- with Parliament's declaration of Ukrainian independence and sovereignty. The meaning of that event for President Yuschenko is reflected in his decision to celebrate that day each year by climbing the highest mountain peak in his country --- Mount Hervola --- symbolizing the ever-ascending aspirations of an independent Ukrainian nation.

A second set of events in the story of Ukrainian democracy days which will always be linked with the President's name, came less than two years ago. We all remember how the integrity of democratic processes were threatened, defended and finally vindicated with Mr. Yuschenko’s election to the presidency. The world was watching those events ---and drawing inspiration from them, as the words "Orange Revolution" were entered forever into the global vocabulary of freedom.

In all of these ways then --- as a perceptive student of human institutions, --- as an ardent advocate of cultural traditions, --- and as a courageous voice of democratic aspirations, President Yuschenko adds today his own powerful chapter to the Die Quadriga story.

It is indeed a great honour for me to present him to you.