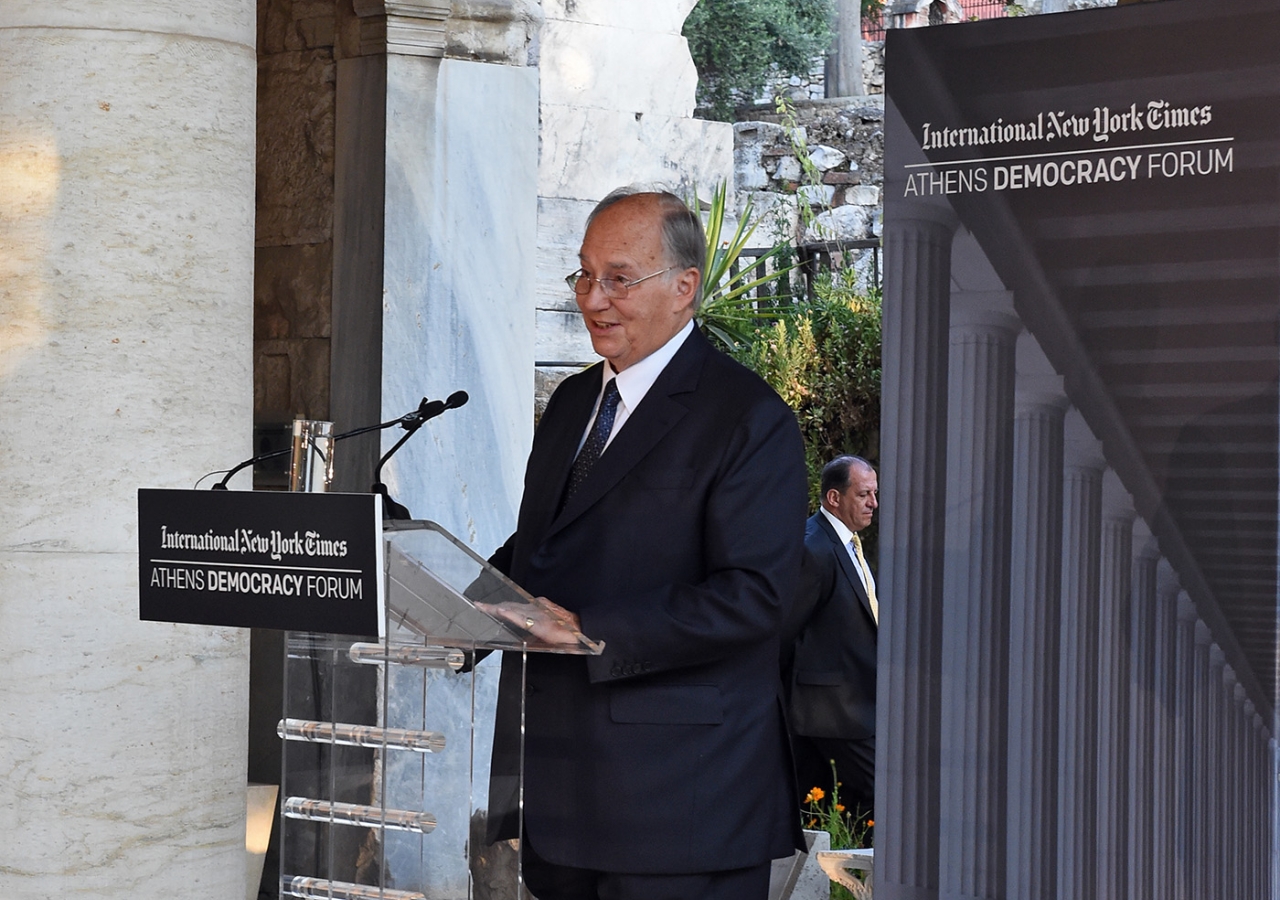 Mawlana Hazar Imam speaking at the Stoa of Attalos in Athens where he delivered a Keynote Address at the Athens Democracy Forum on the International Day of Democracy. Gary Otte
Location
Athens, Greece
Related Information
Related Links

“One ultimate requirement for any effective democracy is the capacity to compromise. Social order rests in the end either on oppression or accommodation. But we can never find that balancing point – where the interests of all parties are recognised – unless competing leaders and their diverse followers alike, are committed to finding common ground. That common ground, in my view, is the global aspiration for a better quality of life – from the reduction of poverty to quality longevity – built upon opportunities that will provide genuine hope for the future.”

I am grateful indeed for this opportunity to discuss with you the challenges facing democracy in our world – and to do so in such an appropriate setting. My warmest thanks also go to the people of Athens for their gracious welcome, and to my friends at the New York Times.

I have long admired – since my undergraduate days at Harvard – what the Times has meant to the pursuit of truth and justice in our world. And I have appreciated our opportunities to work together through our Diplomatic Academy in Paris for example, and also through the good counsel the Times provides for our media company in East Africa.

The topic of democracy and its challenges is one that I have followed closely for a long time, most intently in the developing world of South and West Asia, the Middle East and Africa, where so many members of the Ismaili community live and where so much of our development work takes place.

I assumed my role as Imam of the Shia Ismaili Muslims in 1957. It was a time when old colonial empires were crumbling and democratic hopes were rising. But too often, high expectations were not fulfilled. At the same time there was a crisis only a few years later, following the collapse of communist hegemonies.

It was expected that newly independent countries would be able to make huge economic and diplomatic choices between capitalism, socialism, alignment and non-alignment, even while they were fashioning new frameworks of governance. But it was a tough assignment. Often, when old autocratic orders yielded, new democratic orders were not ready to thrive or were walled in by political and ideological dogmas.

Today, all across the world, we continue to hear increasingly about “a crisis of confidence” in governments. While the pace of history accelerates, democratic governments often deadlock.

Scholars now count a growing percentage of countries as failed democracies. The Fund for Peace reports that in more than two-thirds of the countries regarded as the world’s most fragile, conditions have actually worsened this year. The enormous refugee crisis that now confronts us is one manifestation of that challenge.

I believe that the progress of democracy in our world is fundamentally linked to improving the quality of human life. The promise of democracy is that the people themselves best know how to achieve such progress. But if that promise is disappointed, then democracy is endangered. A UNDP survey of South American publics some years ago demonstrated that most people preferred an effective authoritarian government to an ineffective democratic one. Quality of life was the prime concern.

But what can we say then, about why democratic systems often fall short in their efforts to improve the quality of their constituents’ lives? Let me suggest four elements that could help strengthen democracy’s effectiveness in meeting this central challenge.

They are: improved constitutional understanding, independent and pluralistic media, the potential of civil society, and a genuine democratic ethic.

My first suggestion is that the current challenges to governance should be seen less as problems of democracy than as problems of constitutionality. There are more countries today than I can ever recollect before that are grappling with outdated constitutions – frameworks that seem unable to reconcile opposing factions, advance economic priorities, encourage civil society, or protect human rights.

But constitutional revision, especially in developing countries, is not easy. One problem is a poor understanding of comparative government systems. That subject is not part of most educational curricula, and in the countries I know best, the media rarely explain the logic or the options of constitutional change.

In some countries there actually is no clear constitutional means for constitutional change. Even when a referendum is held to validate such change, most people are neither prepared nor willing to express a considered judgment. The result is that governments in power often have an open field.

In my view then, a first step to better democratic governance is a better public understanding of constitutional principles.

It is easy for example, to say that we want government “of, by and for the people” – that governments should be servants of the people, and ultimately responsible to them. But that does not mean that most governmental decisions must be made by an enormous range of far-flung participants: by vast plebiscites, or popular referenda, or public opinion polling, or the number of hits on an internet blog. Such misapplied versions of democracy can produce irrational leadership choices and poorly informed policies. Sometimes, efforts to impose simplistic popular democracy can create voids of governance, which can be exploited to dangerous ends – and I have seen this in various countries in the developing world.

But then, who should make various governmental decisions? My response would emphasise the idea of balanced authority, including the concept of healthy federalism. For increasingly diverse societies, a constitution that divides and balances power is essential.

In discussing constitutional challenges, it is impossible to ignore the recent revival or creation of new theocratic political parties in the Islamic world. The question is how theocratic principles of governance can operate constitutionally in increasingly secular political environments. It seems essential to me that such principles should be regularly tested by the electoral process, if only so that the Muslim world can have a better understanding of the secularisation processes, which are inherent in western democracy. And democratic principles in turn, must respect the broad diversity of human faiths and cultures.

Finding the right constitutional balance is no easy matter, and we make a great mistake if we think that one size can somehow fit all. Effective constitutions must be adapted to a variety of cultural and demographic realities. But it can be done. One recent example is that of Tunisia, where after intense and arduous negotiation, a promising new constitution won broad public support. My central point, in sum, is that we cannot build better democratic performance over time without a better understanding of constitutional values.

A second key variable for enhancing democratic effectiveness is the critical role of competent and independent media voices. We often forget that ancient Greek democracy required a highly compact community living within the sound of a “crier’s voice,” as Aristotle said. Under such conditions, face-to-face dialogue could foster a sense of trust and political accommodation.

But these ideal conditions now obtain only rarely. Populations are much larger, more widely scattered, and more diverse. They can most easily be mobilised around vivid but superficial symbols and negative propositions. Often what counts most in our extended societies is not what one is for, but whom one is against.

In such circumstances, polarisation and impasse are constant risks.

Nor can we rely on advances in communication technologies to overcome the obstacles of distance and diversity. In fact, new media technologies have often made matters worse (and I don’t mean the New York Times!) From the development of written language to the invention of printing, to the development of electronic and digital media – quantitative advances in communication technology have not necessarily produced qualitative progress in mutual understanding.

To be sure, each improvement in communications technology has triggered new waves of political optimism. But sadly, if information can be shared more easily as technology advances, so can misinformation and disinformation. If truth can spread more quickly and more widely, then so can error and falsehood.

Throughout history, the same tools – the printing press, the telegraph, the microphone, the television camera, the cell phone, the internet – that promised to bring us together, have also been used to drive us apart.

The age-old promise of democracy is that social cohesion and public progress could be achieved by consensus rather than by coercion. But genuine democratic consent depends on dependable public information.

The danger in an age of mass media is that information also can be misused to manipulate the public. All around the world, authoritarian rulers increasingly use media to “coerce” the consent of the governed. Our hosts today, the International New York Times, recently published a remarkable description of this phenomenon under the headline, “The Velvet Glove.”

The power of a leader’s reasoning or the truth of his arguments, the report suggests, are often less important than his command of media influence. What results can be the illusion of democracy, but not its substance.

No, our technologies alone will not save us. But neither need they ruin us. It is not the power of our tools, but how we use them that will determine our future.

Among other things, this means prioritising the role of independent media, and indeed, of a multiplicity of independent voices. Demographic pluralism must be reflected in healthy media pluralism.

I mentioned earlier my own involvement in the African media scene – as founder of the Nation Media Group. It was launched at the time of Kenyan independence, and for nearly six decades media independence has been its watchword – a sine qua non for democratic health.

This leads me to my third observation. Government, while critical, can only take us so far. At a time of democratic disappointment, we must re-emphasise the immense potential of those non-governmental institutions that we call “civil society.”

Too often, our thinking is trapped in a false dichotomy. We talk about the public sector and the private sector, but we often undervalue a third sector – that of civil society.

Civil society is powered by private energies, committed to the public good. It draws on the ancient, classical link between democracy and the publicly-committed citizen.

It includes institutions of education, health, science and research, embracing professional, commercial, labour, ethnic and arts organisations, and others devoted to religion, communication, and the environment.

Finally, let me mention a fourth concern that underlies this entire discussion – the central importance of fostering a “democratic ethic.”

At the heart of a democratic ethic is a commitment to genuine dialogue to achieve a better quality of life, even across new barriers of distance and diversity. This means a readiness to give and take, to listen, to bridge the empathy gaps as well as the ignorance gaps that have so often impeded human progress. It implies a pluralistic readiness to welcome diversity and to see our differences not as difficult burdens but as potential blessings.

One ultimate requirement for any effective democracy is the capacity to compromise. Social order rests in the end either on oppression or accommodation. But we can never find that balancing point – where the interests of all parties are recognised – unless competing leaders and their diverse followers alike, are committed to finding common ground.

That common ground, in my view, is the global aspiration for a better quality of life – from the reduction of poverty to quality longevity – built upon opportunities that will provide genuine hope for the future.

Democracy can only survive if it demonstrates – across the years and across the planet – that it is the best way to achieve that goal.