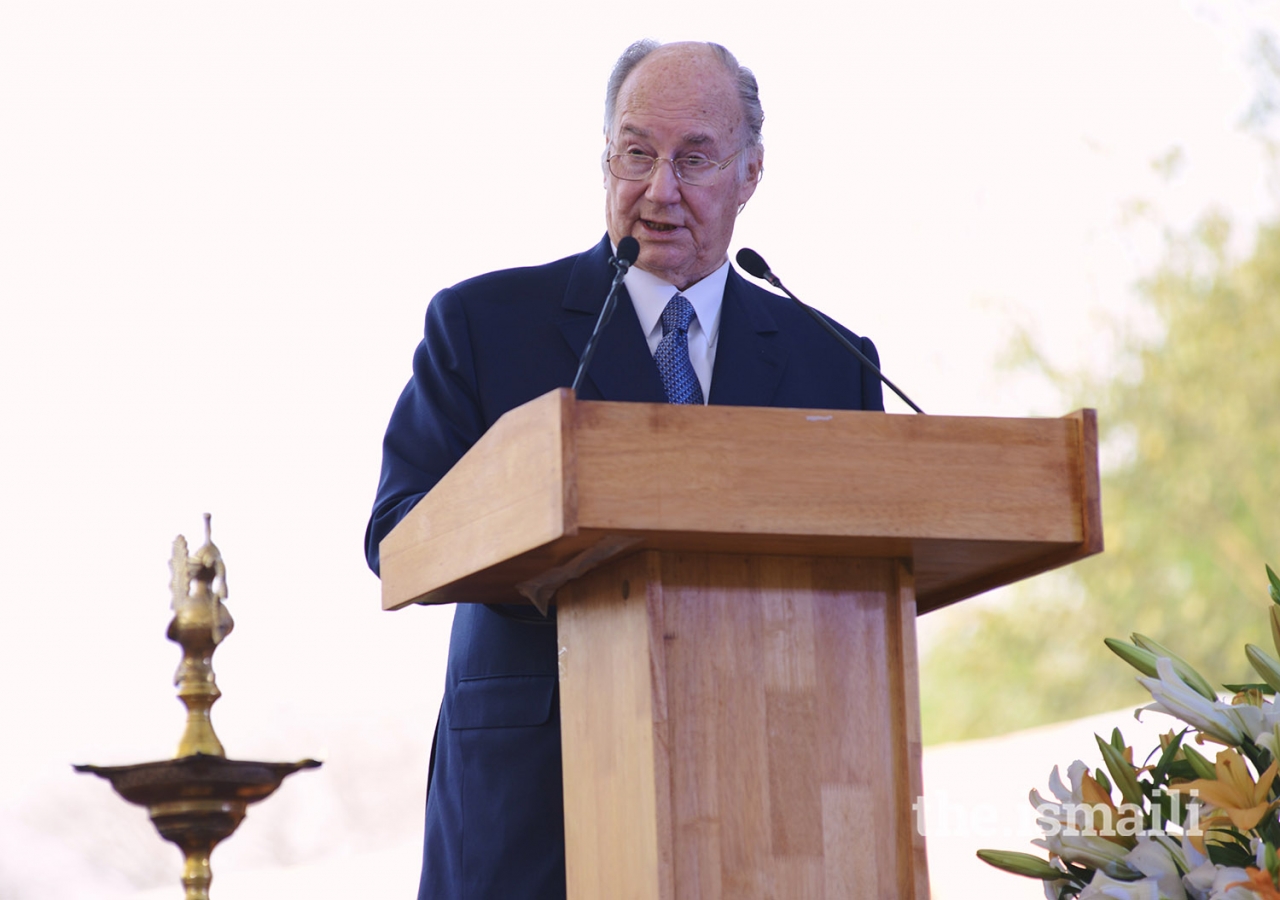 I am deeply honoured - and so very happy - to share with you in today’s ceremony.  I have followed the Sunder Nursery project with keen interest for many years – going back at least to the year 2000, when the Aga Khan Trust for Culture first undertook the restoration of the Gardens of Humayun’s Tomb, just next door.

I also remember the day ten years ago when we signed - with the Government of India and its agencies - the Public-Private Partnership which has so effectively advanced this great cultural complex.  We signed that agreement in 2007, and our partnership over these past ten years has been remarkable.

Our deepest  gratitude goes out today to all of our partners - including the Ministry of Housing and Urban Affairs, the Central Public Works Department, and the Archaeological Survey of India, as well as to the Norwegian Ministry of Foreign Affairs and the US Embassy through the US Ambassadors Fund for Cultural Preservation.  Likewise, the hundreds of craftsmen – stone carvers, plasterers, masons and gardeners - deserve our warmest appreciation and recognition.

And I would also salute the memory of the late Professor M. Shaheer - who sadly is no longer with us.  Professor Shaheer worked with the Aga Khan Trust for Culture for 18 years.  He was the landscape architect for our project here at Humayun’s Tomb, as well as restorations in Kabul and in Hyderabad.  His contribution to the Sunder Nursery project was immense -from the original master plan through to the detailed drawings.  We think gratefully of him today as we see the results of his planning.

The ground on which we stand has been a centre of cultural history for a very long time.  It was nearly seven centuries ago, for example, when the Sufi Saint, Nizamuddin Auliya, walked these paths and shared his teachings of universal love.  That same message of tolerance and humanity would soon infuse the splendid Mughal empire – also centred here - with its Grand Trunk Road passing through this very terrain.  From here, some one-quarter of the world’s population was once governed in a remarkably pluralistic, harmonious, spirit.

It is in that same spirit of universal harmony that we dedicate these Gardens today.  For it is the Garden, down through history, that has often symbolised the harmonious interaction of Divine Blessing and Human Creativity.

This merging of Nature’s Gifts with Human Design is an ideal that is deeply embedded, of course, both in Indian culture and in Islamic traditions, with the flow of refreshing water reminding us of the abundance of Divine Blessing.

The Sunder Nursery expressed these same values when it was created here - almost one century ago, in 1924.  The name, Sunder, itself, has its roots in ancient Sanskrit - often described as the world’s oldest language - where “Sunder” simply means “beautiful.”

The purpose of the Sunder Nursery a century ago was to gather the most beautiful plant species from every corner of the British Empire - and then to share them with the rapidly developing city of New Delhi.

But even as we reflect on these rich traditions, we also know that they have sometimes been neglected.  Under pressure from exploding populations and shrinking budgets, too often crowded buildings have been squeezed into dense spaces – overlooking the importance of open greenery in healthy urban landscapes.  Some have suggested that open spaces are unproductive - or even wasteful - ignoring their aesthetic, recreational and economic potentials - as catalysts for tourism, for education, for community development and for sport.

To restore, create and revitalise beautiful green spaces has been a prime goal of the Aga Khan Trust for Culture in recent years - with ten notable successes in places ranging from Cairo to Zanzibar, from Toronto to Kabul, from Dushanbe in Tajikistan to Bamako in Mali – and, of course, here in India.

All of these projects were designed to honour the past – while also serving the future.  And it is with the future in mind that we now dedicate the Sunder Nursery as one of the world’s great public parks - open to all for recreation, for contemplation, for education, and for inspiration.

Just think of what a lively, energetic place this will be in the days and years to come.  Already, we are told, a vast array of birds and butterflies have made their new homes in these restored spaces.  And soon they will be joined by school children coming here to experience a variety of new micro-habitats, by scientists advancing their ecological research, by artists meeting audiences in the beautiful Garden amphitheatre, by historians and other visitors engaging with dozens of preserved historical monuments.

As we think about this lively future, we also know one more thing:  our economic planning means that the Sunder Nursery will also be a self-sustaining entity.

It will truly be - a gift from the past that will keep on giving - long into the future.