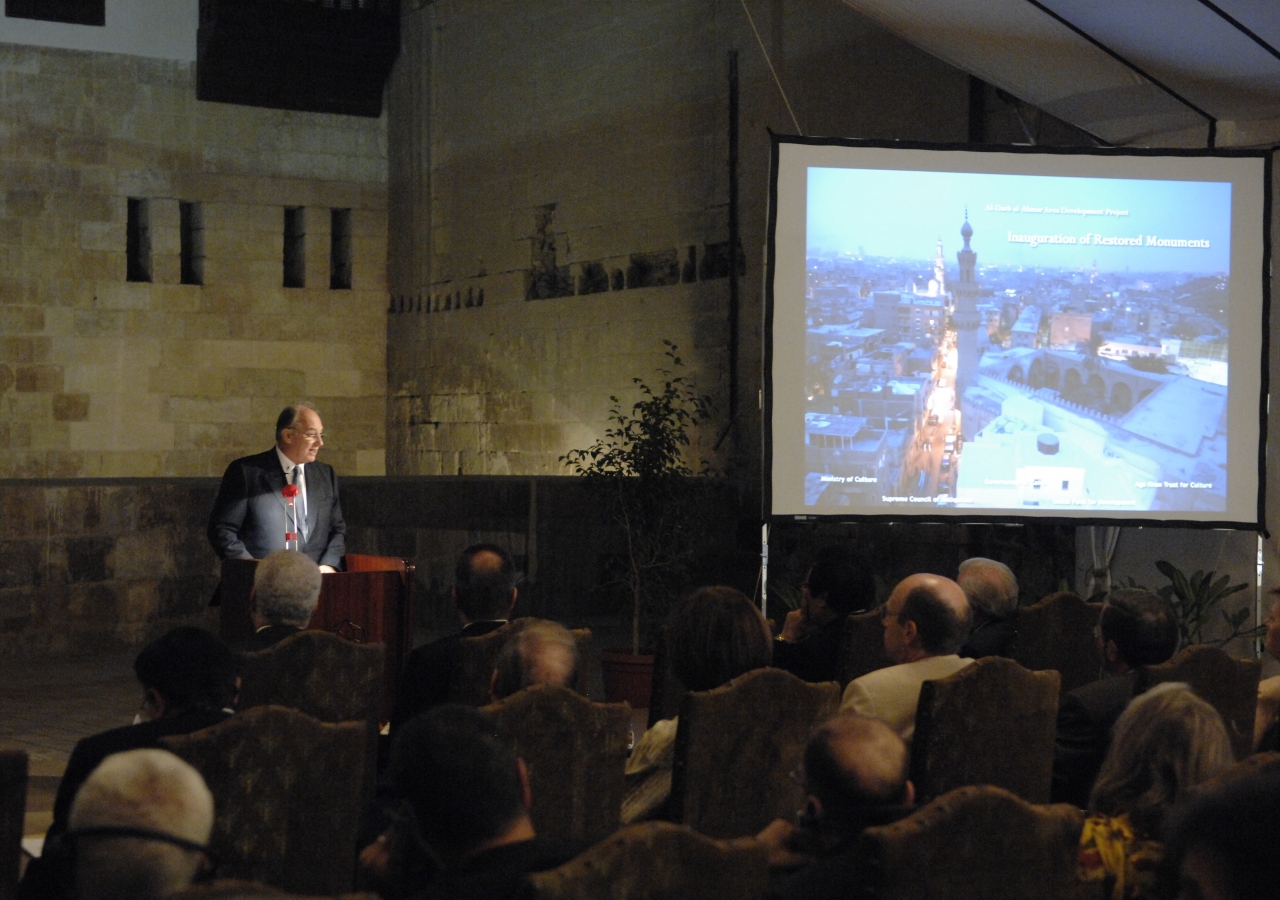 Inauguration of the restored monuments in Darb al-Ahmar

It is a very particular pleasure for me to welcome you tonight, as we share in a special moment - and the first and most important thing that I want to do is to thank you for what you have done to make this moment possible.

The buildings we inaugurate are central elements in an effort which has given me profound personal satisfaction for nearly a quarter of a century - the revitalisation of Islamic Cairo.

The joy I received from this project stems from at least three of its extraordinary dimensions.

First, I have found that this endeavour has provided for me, personally, a profound sense of connection with my own ancestors, the Fatimid Caliphs, who founded Cairo and who laid its physical and cultural foundations 1000 years ago. To reach back across 35 generations and to be able to engage in the restoration and renewal of their legacy is a rare and stirring privilege. How could I not be affected seeing the remains of the original Fatimid walls and towers that protected this city when they founded it? And this experience has special meaning for me as I mark my own 50th year as Imam of the Shia Ismaili Muslims.

Secondly, this entire project, from the time we began, with so many of you, to dream about it, 23 years ago, has provided an inspiring example of broadly based cooperation – among diverse people and institutions, working across cultural, religious and national lines, including participants from government, the private sector, and the non-profit institutions of civil society. It has involved people whose homes are thousands of miles away from Cairo – and it has also involved, most profoundly, the people of this neighbourhood, those who live and work only minutes away, in the very shadows of these buildings.

Among the partnerships I would note today are the ones we have enjoyed with the Egyptian Government, the Ministry of Culture, the Governorate of Cairo, the Supreme Council of Antiquities, the Social Fund for Development, the World Monuments Fund, the Swiss Egyptian Development Fund, the Ford Foundation, the French Institute of Archaeology, the American Research Centre and the United States Embassy in Cairo, as well as the city of Stuttgart. And I would also note with gratitude the signing, this past July, by the Governorate and the Aga Khan Trust for Culture, of a formal Public-Private Partnership (PPP) linking Al-Azhar Park with the ongoing projects in Darb al-Ahmar and adjacent areas. Whatever barriers history might possibly have put in our way have been removed by our common will to achieve a remarkable goal.

These diverse interactions are particularly fitting, of course, as we remember the origins of this city. The Fatimids, after all, prided themselves on a broadly inclusive approach to knowledge. What they founded here would become a truly global city – to use contemporary parlance. Pluralism was indeed the hallmark of a Golden Age of the City Victorious 1000 years ago. I am happy that I can feel in this time also, like during the time of my predecessors, that there is true pluralist consensus surrounding our endeavours – all of us working together - to revive the Islamic city.

The first two reasons, then, for my special identification with this undertaking are its historical connections to the past, and the diverse and plural dimensions of its present. The third element, however, has to do with its sustainability in the future - and in discussing that future, two important questions come to mind.

They are: first, at what point of physical improvement can we consider that the areas of the Islamic city most at risk have been restored, rehabilitated and returned to their residents in a secured manner? And secondly, what can and should we do to ensure that the more than one million visitors per year who are likely to visit the Azhar Park in the future become an economic benefit rather than a potential economic burden for the residents of Darb al-Ahmar?

If we are able to develop and implement strong and fulfilling answers to these questions, then my third reason to view this as a thrilling project will be fulfilled: It will constitute an extraordinary gift to the future. Even as we look back over many centuries today – even as we have reopened and literally “uncovered” gifts from the past as this project has developed – so we can also look far ahead in time. We are aware today of the connections we are establishing to generations yet unborn, those who will live here and those who visit from afar, and who will treasure these sites as precious gateways to their history.

Let me attempt briefly to suggest some responses to the two questions I have asked earlier, the first being to define when sufficient physical work will have been completed for us to consider the core of the Islamic city restored. Logically, we must complete the work which is already underway, and which has produced such magnificent achievements as the restoration of the Kheyrebek Complex, where we are gathered today, and the Umm al Sultan Shabaan Mosque through the close collaboration with the Ministry of Culture and its Supreme Council of Antiquities. The ambitious conservation programme that lies ahead contemplates interventions in the Alin Aq Palace, the Tarabay Mausoleum, the Aslam Mosque, and in due course in the Blue Mosque. We must finish the restoration of the Ayyubid wall, and the most important open spaces along it. And we must complete the archaeological site at the North-west edge of the Park with its Fatimid and Mamluk excavations. This site, in turn, will be tied into the new museum of historic Cairo being created in collaboration with the Supreme Council of Antiquities, as well as the new Urban Plaza and the significant underground parking which are both part of the programme agreed by the Aga Khan Trust for Culture with the Governorate of Cairo.

To complete this list of future tasks, I should add that along the historic wall there are several hundred houses that remain to be restored, just as the Early Childhood Centre and the Vocational Training Centre remain to be completed. Finally, I cannot see how this enormous endeavour, which still lies ahead, could be considered complete without serious attention being given to the area’s ongoing infrastructure, such as the road surfaces, the sewage disposal system, the distribution of water and electricity, and signage and public lighting.

The second question I have raised was how we increase the impact of the new economic life generated by the Azhar Park to the benefit of the people of Darb al-Ahmar.

In responding to this question, I would note that special emphasis has been placed by our planners on sustainability. It has always been clear that a strong financial base must be created just for maintaining the accomplishments we note today. The project must be compatible with the long term health of this neighbourhood and its community. For any important work of restoration to survive and to thrive into the longer-range future, it must contribute to the well-being of those who live in its presence – so that they in turn will have reason to safeguard its enduring viability.

We have two opportunities to strengthen the economic life of this part of Islamic Cairo which I want to highlight today: The first is to encourage a higher number of the visitors to the Park to come to Darb al-Ahmar to see its historic buildings and to acquire goods and services. It is therefore essential that the North-west and South gates of the Park should be completed and opened as soon as possible, and that the visitors should be encouraged to walk to the restored wall, and then through it, into this unique historic area of Cairo, Darb al-Ahmar with its remarkable concentration of monuments and open spaces.

There is another way, a second way, to support the economic enhancement of the population of Darb al-Ahmar. I believe much more can and should be done with our micro-credit programme, by developing new products, better adapted to local needs, and making them more easily accessible. This work is ongoing, but it must be completed and put in place early enough so that the service providers and traders of Darb al-Ahmar can prepare themselves in good time for the increased number of visitors that will come from the Park.

A long and strenuous journey began when we gathered here back in 1984 to hold a seminar on the growth of Cairo. What we mark today is another milestone along that path – not the first nor the last, but an important reminder of how far we have come – and an added moment of encouragement – as we continue the demanding journey which lies ahead of us.

I know you join me in feeling that we have been extraordinarily blessed in the heritage that has been given to us – as well as in the friends and collaborators who now share our life and work – all of us striving together to be good stewards of our inheritance as we pass it on to the future.