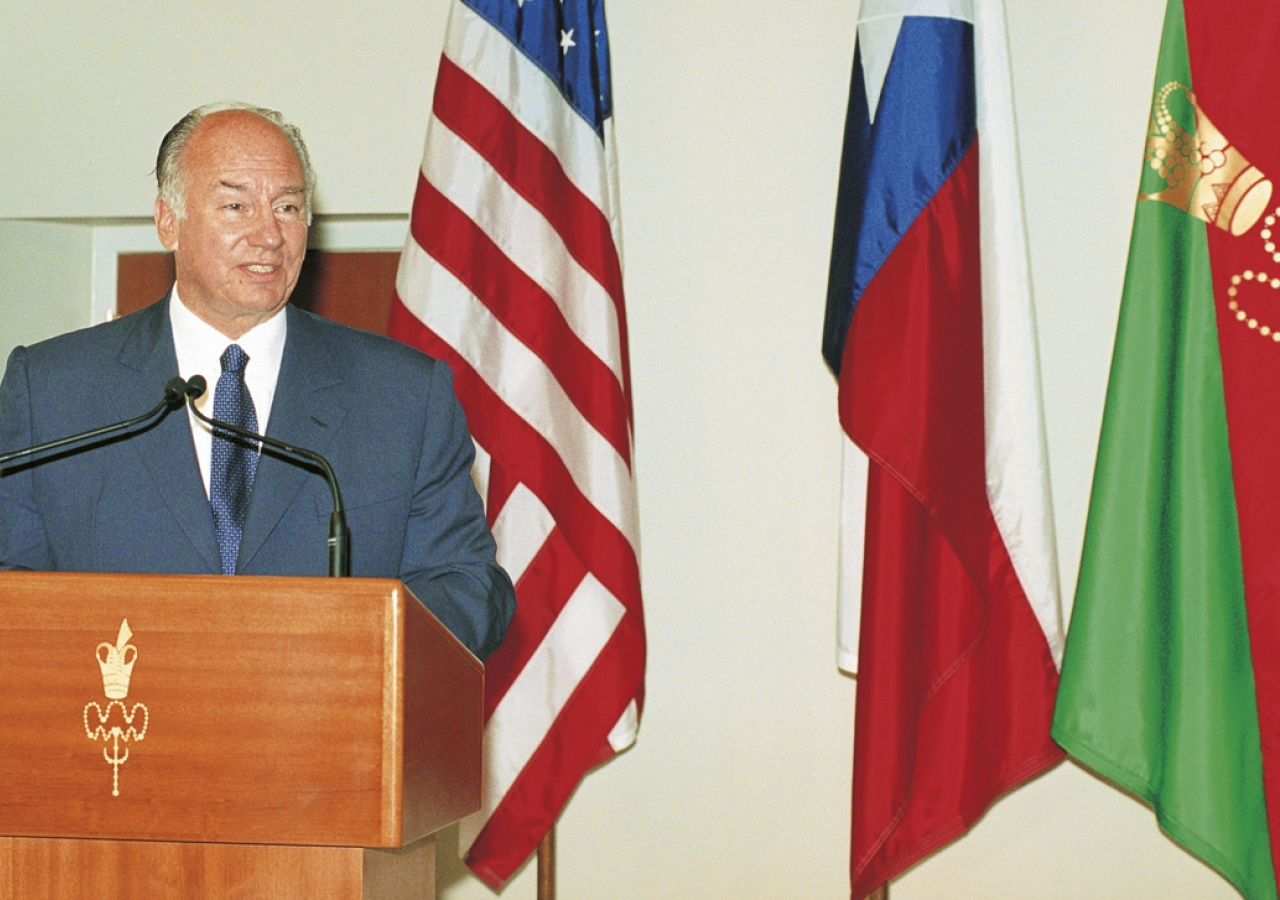 Inauguration of the Ismaili Jamatkhana and Center, Houston

His Highness the Aga Khan delivering a speech at the opening ceremony of the Ismaili Jamatkhana and Center in Houston, Texas. akdn / Gary Otte
Location
Houston, Texas (USA)
Related Information

Governor Perry,
First Lady of Texas, Anita Perry,
Mayor Wallace,
Leaders and representatives of the Congress of the United States, the State of Texas and the City of Houston, Consuls General,
Distinguished Guests

It is a great pleasure to be here today to welcome one and all to the Inauguration of the Ismaili Jamatkhana and Center at Houston. I am particularly thankful for your presence Governor Perry, and of the First Lady of Texas, and for that of many other elected officials on an occasion of great significance for the Ismaili Community of greater Houston.

Because this Center also incorporates the permanent home of the Ismaili Council of the United States and other Ismaili constitutional bodies responsible for the well being of the Community all over this country, the Center we inaugurate today is equally important for every Ismaili in the United States. We are honoured that you have taken time on a day of rest amidst your heavy schedules to share this moment of celebration, gratitude and reflection with us.

The conception and completion of a project as complex as this requires dedicated and sustained contributions from many people -- too many to recognise individually. I congratulate the design architect, The ARCOP Group of Montreal, Canada, and the General Contractor for the project, Durotech of Houston. I would also like to acknowledge the contribution of the Aiglemont Construction Department and the Imara Volunteers.

The person who unquestionably deserves individual mention is the senior design architect, Mr. Romesh Khosla of New Delhi, India. Mr. Khosla’s career has been marked by many accomplishments and awards. Among them is the design for the Mughal Sheraton Hotel in Agra, which faced the challenge of creating a contemporary structure with clear references and reflections of deep historical and cultural elements, and to do so within sight of the Taj Mahal! For his success with that assignment, Mr. Kholsa was selected by an independent jury of his peers to be among the winners of the triennial Aga Khan Award for Architecture in 1980, the first year of the Award’s existence.

In the Center we inaugurate today, the design brief charged Mr. Khosla and his colleagues to create a contemporary building that would similarly express Islamic values, ethics and attitudes but, in this instance, in the context of Southwestern and Texas architecture and materials, and in harmony with elements of the site’s natural setting and surrounding buildings.

Many of you may be surprised by the amount of time I have devoted to talking about architecture on this occasion. Those familiar with my understanding of the importance of architecture in the teachings of Islam and Islamic history will not have the same reaction. Islam does not deal in dichotomies but in all encompassing unity. Spirit and body are one, man and nature are one. What is more, man is answerable to God for what man has created. Since all that we see and do resonates on the faith, the aesthetics of the environments we build and the quality of the interactions that take place within them reverberate on our spiritual lives. As the leader of a Muslim community, and particularly one that now resides in twenty-five countries on four continents, the physical representation of Islamic values is particularly important to me. It should reflect who we are in terms of our beliefs, our cultural heritage and our relation to the needs and contexts in which we live in today’s world.

Some years ago we gathered a group of eminent scholars of Islamic culture and distinguished architects and designers representing all major faiths, in a series of seminars to wrestle with the challenge of coming up with a definition of Islamic architecture. One of the first outcomes of the effort was the conclusion that no single definition exists because over its long and distinguished history, Islamic architecture has reflected different climates, times, materials, building technologies and political philosophies.

But this is a very important finding in itself. It shows that trying to establish a norm would be counter productive, because it would stifle that strength which comes from the diversity and pluralism of Muslim societies, past and present, and the creativity of those who will build around us in the years ahead. Unfortunately there are forces at work in the Islamic world that seek to establish just such a norm. This makes it all the more important that we strive to counter such efforts by employing all the means of intellectual discourse -- research, discussion, celebration of innovative projects, and the commissioning of freshly conceived but well researched new buildings.

I think it would be appropriate for me to say something on this occasion about the Ismaili Community – in Houston, Texas, the United States and around the world. Today the Ismailis are a global community that comprises a multiplicity of peoples ranging in their origins from the north-west of the Arab world and the Middle East, through Iran and the Indian sub-continent to Afghanistan, Central Asia and Western China. Migrations in the late 19th and early in 20th centuries created a substantial presence in sub-Saharan Africa as well. As Shia Muslims, the Ismailis are united by their recognition of the Prophet Muhammad’s appointment of his cousin and son-in-law Hazrat Ali as the first Imam and his declaration entrusting his Authority to his progeny through Hazrat Ali and his wife Fatima, the Prophet’s daughter.

In 1957, I was still a student at Harvard when I inherited the responsibilities of the Ismaili Imamat from my Grandfather, Sir Sultan Mahomed Shah. It seemed inconceivable then that there would ever be substantial communities in the West. The Ismailis were too deeply rooted in their ancestral homes, indeed frozen there by the Cold War in Asia, the Middle East and Africa. But dislocations in the wake of decolonialisation, and more recently the collapse of the Soviet Union and the prolonged difficulties in Afghanistan, have caused a number of Ismailis to seek new lands and homes. These migratory movements over the last half-century have resulted in a substantial Ismaili presence in Russia, in Western Europe, the United Kingdom and Portugal, and particularly in the United States and Canada.

In these settings Ismailis have found themselves rejoicing with new opportunities, but also confronted by new challenges. Bolstered by a long tradition of self-reliance, and a strong system of Community organisations, Ismailis have established themselves quickly as productive members of society in their new homelands. This has been particularly true in the United States with its long history of welcoming immigrants, its sense of opportunity and hope, and its recognition of accomplishment and merit. I express my gratitude to the people and leadership of the State of Texas for giving concrete expression to these important American values.

Nine eleven has scarred America, but not just America. It has scarred the Islamic world, and hundreds of millions of devout and practicing Muslims for whom the word of the Quran is the word of God. We have clarity and direction enough when the Quran affirms that to save a life is, as if, to save humankind altogether. It is in this context that I request that you view the Ismaili Jamatkhana and Center, Houston, as much, much more than a place of congregation, and a home for administrative offices. The Center will be a place of peace, humility, reflection and prayer. It will be a place of search and enlightenment, not of anger and of obscurantism. It will be a center which will seek to bond men and women of this pluralist country to replace their fragility in their narrow spheres by the strength of civilised society bound together by a common destiny. It is already a symbol of the hopes of people who lived through change and turbulence, and have ultimately found security and opportunity here in the United States, the majority of whom have chosen the State of Texas.

Thank you for sharing this important occasion with us.