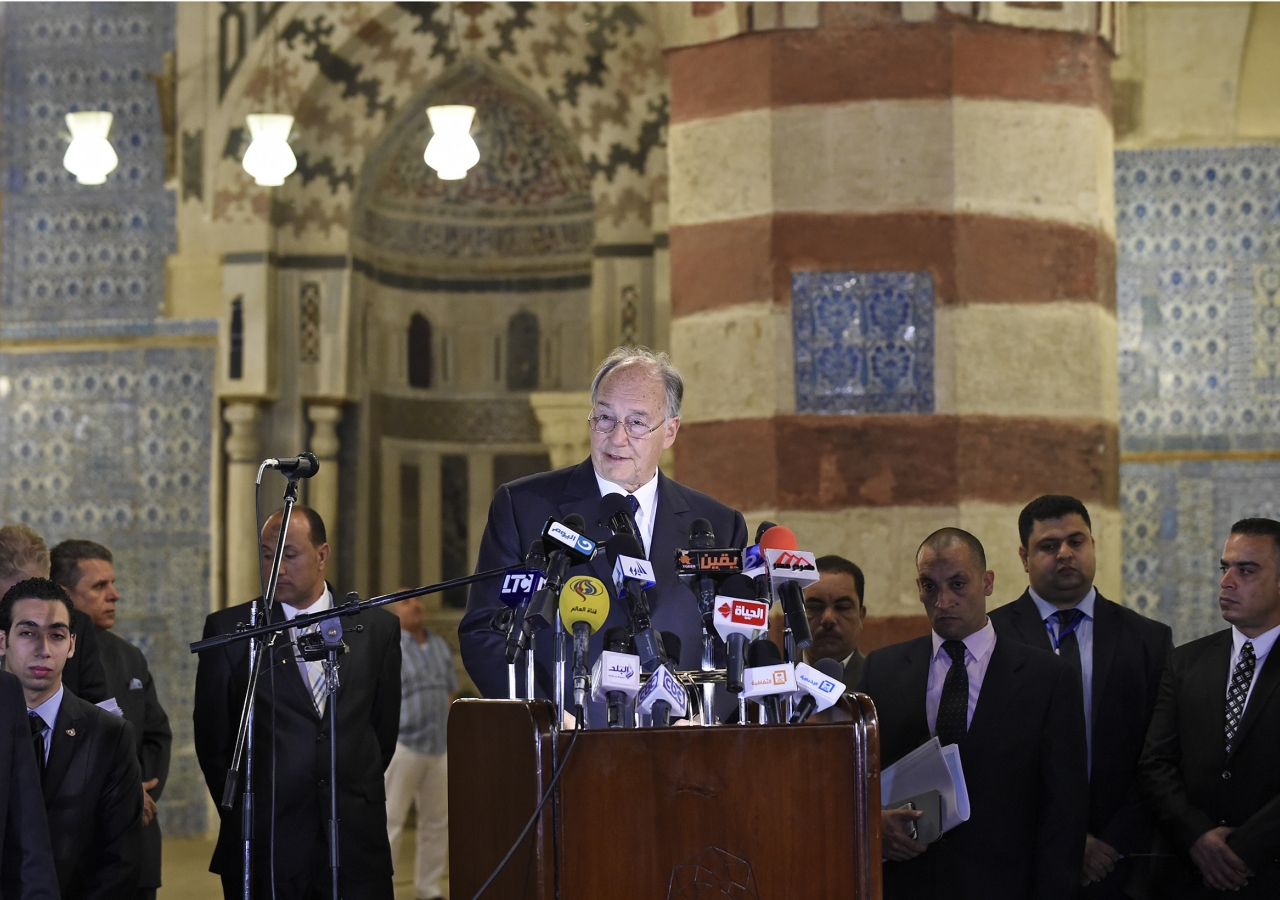 Mawlana Hazar Imam speaking at the inauguration of the restoration of the "Blue Mosque" in Cairo, 2 May 2015. Gary Otte
Location
Cairo, Egypt
Related Information
Related Links

It is an immense pleasure to join all of you once again, in this special celebration. The inauguration of the Aq Sunqur Mosque is an extraordinary moment in its own right. And it also marks the culmination of a larger revitalisation that has taken place over many years in historic Cairo.

As Muslims, we are invited to protect and enhance the world in which we live during our lifetimes. We are trustees of God’s creation, hence the word Trust in the name of the agency responsible for this restoration.

I remember well when the seeds for our cultural engagement in Cairo were first planted at a seminar more than thirty years ago.

You may know about the enormous dumping ground of debris that had developed over the centuries, and surrounded one of Cairo’s poorest neighbourhoods. And you will also know of our effort to create a state-of-the-art green space, the Azhar Park - and how that effort soon extended into a great archaeological adventure, uncovering and restoring some of Cairo’s oldest buildings.

The 12th century Ayyubid wall, for example, was almost completely covered in debris. We could not even tell how long it was! Today, thanks to the work on site, important remains of the Fatimid and Mamluke walls have been discovered and preserved. The minarets of the Khayrbek and Umm al Sultan Shabaan, like other landmark structures, were badly compromised. Six centuries of wear and tear had taken a toll - one that was difficult to reverse, especially given the vast array of heritage sites in Egypt that were competing for scarce resources.

Nonetheless, with the approach of a new century, the work of restoration began here in the Darb al Ahmar neighborhood. And today, thanks to so many of you, we celebrate another important milestone in that stirring story.

That story has featured a great many partnerships - with the Egyptian government, the Governorate of Cairo, the Supreme Council of Antiquities, the World Monuments Fund, the Social Fund for Development, the Swiss Egyptian Development Fund, the Ford Foundation, and the French Institute of Archaeology and the people of Darb al Ahmar. It has truly been a “team” effort - joining a host of local, national and international players.

The restoration of the Aq Sunqur Mosque was itself executed by a team of 60 to 80 craftsmen and conservators. They had first to remove the temporary supports installed after the 1992 earthquake - and then to implant seismic retrofit measures to protect against future earthquakes. They worked to conserve extensive roofing and facades on the one hand, and delicate marble panels and Iznik ceramic tiles on the other. And if you look at the global map you will see that the Ummah often lives in seismic areas.

But it is not enough only to conserve an architectural treasure. Restoration projects can also serve as springboards - as trampolines - for broad social and economic development and poverty reduction. In that process, they can help create both the human constituency needed to sustain a project - and the flow of funding needed to maintain it.

The Aga Khan Trust for Culture strives to approach such opportunities through a multi-tier, multi-dimensional strategy, drawing on experts not only from fields such as archaeology, conservation, restoration, and engineering, but also from the worlds of finance, tourism, education, sanitation and public health - among others. The cultural components of such projects are numerous, varied, and much less finite than most other development initiatives. The Trust therefore remains engaged with its projects, as will be the case here in Egypt, for long periods.

The result of pooling a wide array of talents is that we can also talk about a wide array of accomplishments. We can begin, of course, by saying that seven major monuments were restored here in Darb-al-Ahmar, and that three public open spaces were created. We can take pride in the 17 million visitors that have already come to the Azhar Park. We can talk about how one thousand people were employed directly in this work, while another sixteen hundred were assisted in finding other long-term jobs. We can talk of 175 craftsmen who were trained in restoration skills, while another two thousand people finished other forms of technical and vocational training.

The overall impact on the quality of life in this community has been palpable. Disposable family income in Darb al-Ahmar, for example, increased by 27% between 2003 and 2009 - one third faster that in the whole of Old Cairo. Literacy rates climbed by one-fourth. And the impact will continue to ripple out beyond this community. For example, hundreds of young Egyptians have been trained in restoration by some of the world’s best experts; and they have gone on to create autonomous teams which can take on restoration projects anywhere in Egypt.

Let me also underscore another central motivation for this work. Through revitalisation of the sort we celebrate today, we hope to preserve an extraordinary panorama of Islamic history, from the Fatimid Caliphs to the present. At a time when fractures in the unity of the Ummah are so highly visible, I see such projects as particularly hopeful. They are important symbols for the identity of all Muslims, sources of pride for the entire Ummah.

And finally I would like you to know that a young Muslim walking here in the 22nd century will be able to feel the pull of his or her own history, even in a radically transformed world.

And let us be reminded, too, that in undertaking this work, we are not only attending to our own Islamic heritage, but also preserving an essential part of the patrimony of all humankind.

I can say to you today that the potential power of Islamic cultures is such that the Ummah is capable of achieving global recognition for its amazing heritage of unique spaces and buildings.