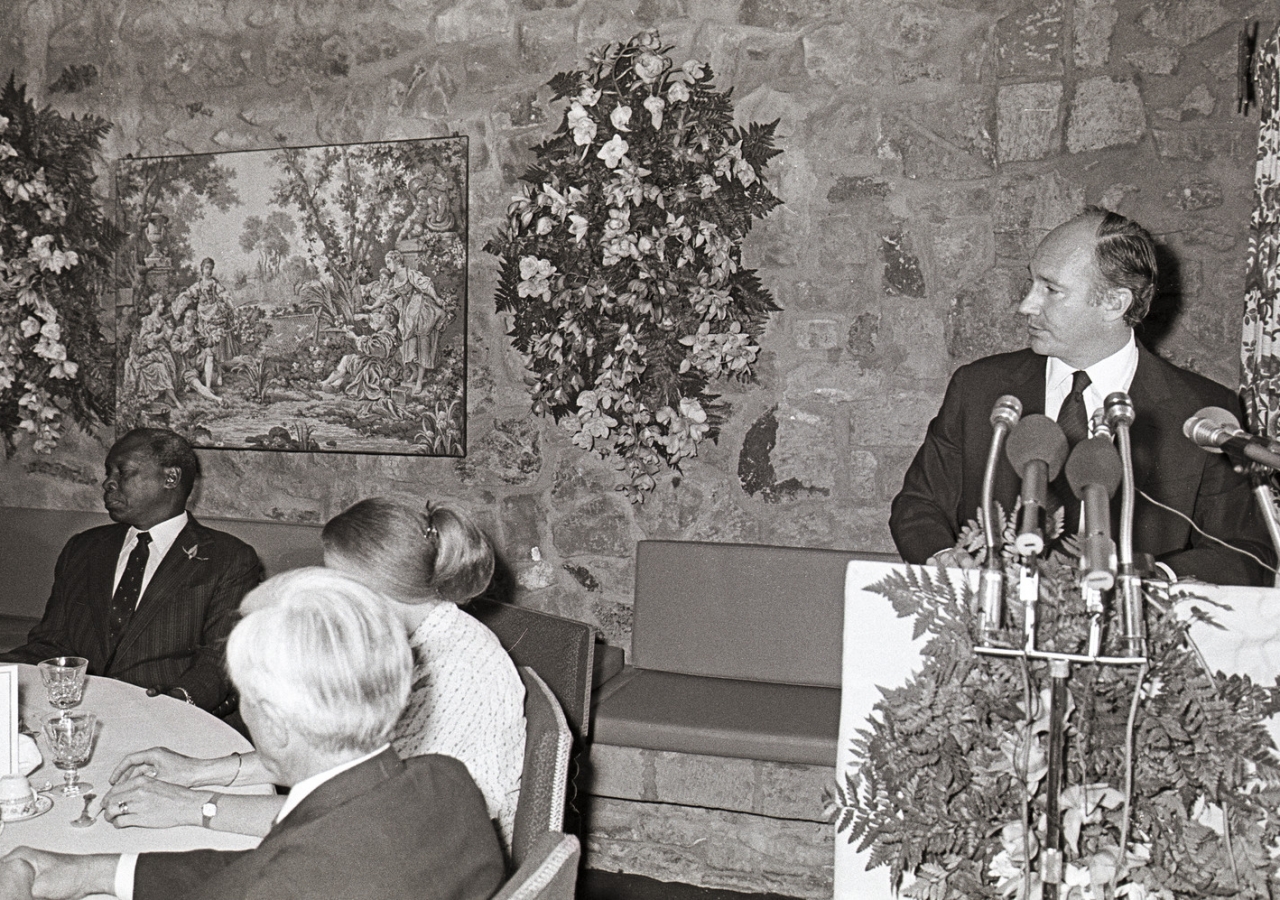 Dinner hosted in honour of the President of Kenya

It is with great pleasure that I rise to welcome His Excellency President Daniel Arap Moi this evening and to have the opportunity of returning his kind hospitality.

Your Excellency, as you know I spent much of my childhood in Kenya, forming unforgettable bonds of affection for your country and its people. I have returned many times since. So it is particularly appropriate that the first of many visits I am making to my Ismaili Communities around the world in celebration of the twenty-fifth anniversary of my accession to the Imamat should be to Kenya.

This country, as I say, holds a special place in my heart and in consequence the assurances which Your Excellency gave last night, coupled with the speech you made on September 21st, have given me great satisfaction. I most strongly endorse the steps which your Government proposes to take in respect of the country’s economy and trade, especially Your Excellency’s recognition of the importance of the private sector in the nation’s growth, the encouragement you promise to both domestic and foreign investors, your measures to assist industrial development, your new incentives for exporters and not least, your undertaking that all Kenyans, irrespective of their origin, race or religion, will continue to enjoy the rights guaranteed in the Constitution with equal protection under the rule of law.

Today I have addressed a business audience on themes which related closely to Your Excellency’s guidelines and yesterday I spoke to distinguished health, education and welfare experts on ways of strengthening the service of social institutions. Your Excellency has emphasised that everyone must work together to build a stronger Kenya. As the completely non-political leader of an Ismaili Community which has sought to integrate itself fully with the nation I am necessarily concerned with the way in which private sector initiative such as theirs can work in harmony with Government, assisting in the achievement of national policies and objectives.

Last night I was delighted to hear Your Excellency underline the importance of the private sector in Kenya’s industrial and commercial development strategies.

What I believe is important now is that decisions affecting the private sector are made promptly and that if there are points of uncertainty in their implementation those points are clarified quickly so that both the national and international response is rapid.

With recession biting deep into the economies of the industrialised nations, forcing them to cut aid budgets, it is more than ever desirable for Third World Governments to utilise private initiative in the development of their countries’ resources, both material and human.

Developed countries can more easily absorb such inflationary factors as the high oil prices which have savaged the Third World’s scarce reserves of foreign exchange. Developed countries do not have the same explosive population growth. They do not depend on basic commodity prices for their living. Even where the levels of aid the developing nations receive are maintained, worldwide inflation reduces the value in real terms.

It is also inescapable that the demography of the Third World countries is different from that of the developed ones. The former are primarily rural and this in itself places a further burden on them. The geographical spread of their populations forces their governments to spend heavily on roads and communications, on irrigation, schools, primary health and welfare. Governments are compelled to make these improvements to the quality of life in rural areas if they are to fulfil the expectations generated by political independence and achieve standards their citizens consider acceptable. This, of course, involves the whole package of basic social support services.

If these expensive improvements are not made, then rural workers drift to the towns, both depriving agriculture of labour and forming a discontented mass of unemployed in the slum fringes of cities.

The only answer for the Third World, in my view, is for it to become more productive and the way to achieve that is by encouraging both local and international investment, especially in rural development. Sate owned enterprises can seldom be a total substitute for private sector initiative in building the infrastructure of a nation’s economy, the whole mass of small businesses, skills and professions which service a productive society. Furthermore, as Your Excellency has observed, a developing country cannot afford the burden of loss-making parastatals.

By contrast, there are many positive aspects in attracting what private initiative can offer from other countries and by linking developing nations with developed ones. Among these aspects are the reduction of financial risk and a very much wider offering of qualified manpower and appropriate technology.

If given the right environment private enterprise can do a great deal more than simply invest, it can introduce competition and stimulate growth. Indeed its successes have tended to highlight the weakness of public sector monopolies, not least in the industrialised nations of the West. Private enterprise can develop the managerial skills and organisational structures necessary for effective economic growth.

Trained managers are needed to mobilise any nation’s resources and this is especially so in the Third World, where both human and material resources are scarce. Good managerial techniques are equally vital to the organisation of social institutions – hospitals and health programmes, schools, community developments, public administration – as to business.

Health and welfare are the predominant items in the budgets of most countries. Huge amounts of money can be wasted on them if management is poor.

Yet at the present time there is a definite lack of training in social welfare management in the Third World. Such training should be a systematic and continuous process to impart knowledge, skills and values relevant both for professionals and volunteers. Furthermore the professionals must themselves be offered career development and incentives or they will depart for greener pastures.

This brings me back, Your Excellency, to my earlier point about the environment. Both the development of the economy and the success of social institutions depend on the creation of the right environment for progress, an environment which enables both businesses and people to realise their full potential.

This Enabling Environment is created by various things, confidence in the future. Reliance on the rule of law and a system of laws which itself encourages enterprise and initiative. Democratic institutions. Protection of the rights of citizens. These are what encourage investment, encourage good managers to remain, encourage doctors and nurses and teachers to want to serve their country, rather than to emigrate as soon as they are skilled. The creation and extension to all areas of the nation’s life of this Enabling Environment is the single most important factor in Third World development. It is as critical to national growth as sunlight is to the growth of plants. Such an environment has been provided in the newly industrialised countries of South East Asia and in barely a generation those countries have successfully leapt across the development gap.

Your Excellency, because of the wisdom of its policies and the stability of its institutions, Kenya has fared better than other African nations since independence. Unhappily recent troubles have been superimposed of the long term ones of world recession. The rapidity with which both are overcome will be directly related to the speed with which all sections of the nation perceive that the Enabling Environment for renewed momentum is being created and respond to it.

Your Excellency, the statements you have made in recent weeks have contributed substantially to the revitalising of the Enabling Environment here in Kenya. They have created a sense of expectation and the implementation of your new policies is now eagerly awaited. As this implementation proceeds I feel confident that you will meet a constructive response both nationally and internationally. It would be only right that all citizens of Kenya should respond and you will not find us wanting.