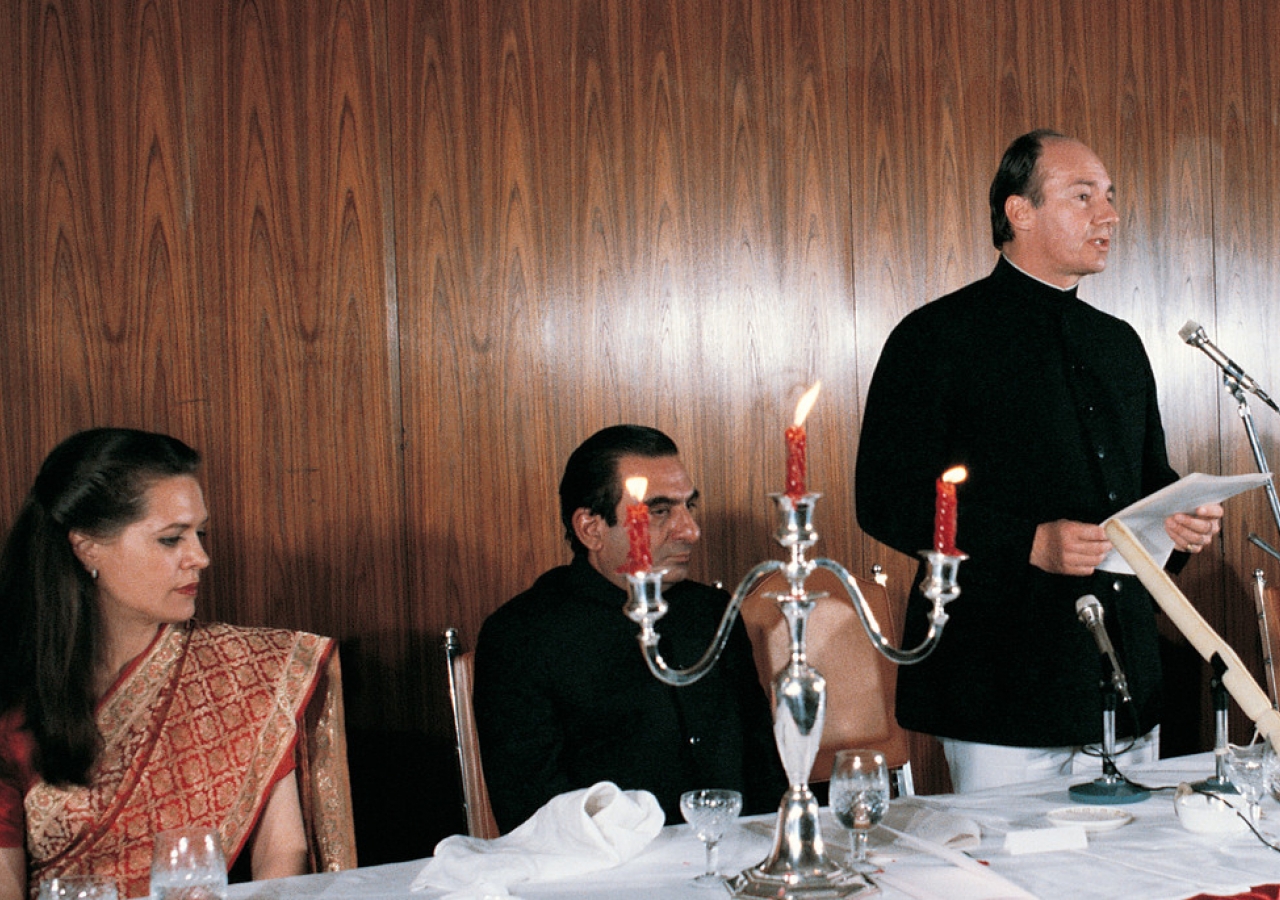 It is a great pleasure, Madam Prime Minister, for me to be able to thank you and your Government for inviting me to India during this Silver Jubilee of my accession to the Imamat of the Shia Ismaili Muslims. Twenty-five years ago I celebrated my Takhtnashini in India and I have returned nine times since. As before, the hospitality which has greeted me has been heart warming, and I would particularly like to thank you for the many courtesies your Government has extended to my wife, my brother and myself, which have already helped to make this Jubilee visit most memorable.

President Morani has informed me that the donations gathered by the Jamat in India for the Society for the Commemoration of my Silver Jubilee amount to the magnificent total of Rs 25 million. They are the measure – the very generous measure – of the unstinted loyalty and devotion which the Jamat has always shown me and I am deeply appreciative of it. The relationship between the Imam and his Jamat is a deep and continuing bond. But the outside world may only appreciate the depth of it on such happy occasions as this.

I have told the leaders of my Indian Jamat that I wish the objectives of my Silver Jubilee year to be set in consultation with them and that I hope the celebration will result in a positive contribution being made to the quality of life of the people of India: not only to the life of our own Community, but of all the communities that make up this great nation. We will not let bigotry, communalism or sectarianism make our lives inward-looking and increasingly meaningless.

There are more than 500,000 villages in India, where 80 percent of the population lives. Of the working population 70 percent is directly engaged on the land, yet their incomes are 50 percent lower than in other sectors of the economy, and the number of landless poor is increasing. The global population will exceed 6,000 million by the turn of the century, of whom 80 percent will be in the developing countries. By definition, most of these people will be rural. These statistics speak for themselves.

The Government has shown itself well aware that the bulk of the rural population is poor, undernourished, underemployed and socially disadvantaged. The current Five Year Development Plan includes a substantial integrated Rural Development Programme, particularly directed towards employment and income generation for those below the poverty line.

Nonetheless, as I have no need to remind you Madam Prime Minister, there is always more to be done. Rural people have to be shown that they end their children have a future on the land and from the land.

This means that the objective in rural areas must be to stabilise the population – I do not mean only in numerical terms – by increasing individual earning potential and making the quality of rural life more acceptable in comparison with that of the cities.

This is, of course, no new idea. Our earliest health care efforts, initiated by my grandfather, Sir Sultan Mahomed Shah, a hundred years ago, were directed towards health care in India’s villages. We have never lost sight of this need and during 1975 and 1976 teams of researchers carried out a series of demographic surveys among my own Community in various parts of this country. The resultant reports proved to be a dramatic statement of the poverty differential between rural and urban dwellers: a differential almost as acute as the much more widely canvassed North-South poverty gap in the world as a whole.

I am sure all of us have seen very young children playing aimlessly in the dust of villages in Asia or Africa. The surveys underlined how little effort was being made for such children’s physical or mental development. Accordingly we began establishing day care centres to provide pre-primary education, nutrition and health care, including immunisation, for children up to 5 ½.

This was done only as a pilot scheme among our own Community. Nonetheless the 25 day care centres we set up had a tremendous impact, even leading to mothers demanding adult literacy classes. In consequence the centres are now being up-graded and becoming springboards for other rural development activity.

Although this trial experience applied only to one end of a wide spectrum of rural needs, it did prove that a carefully thought out scheme addressing as well identified area of potential improvement could produce a worthwhile response. Therefore, knowing that your Government, Madam Prime Minister, is encouraging private initiatives in tackling rural support problems, I have agreed to my Jamat’s which that an Aga Khan Rural Support programme should be established. I hope it will make an innovative and effective contribution to the application or effort and resources in the rural areas, both through its own work and by example.

The AKRSP is intended to be a catalytic agency, helping to identify income generating opportunities and to develop plans of action. We are well aware, as I indicated earlier of the many existing programmes being carried out by central Government, by State Rural Development Corporations and by voluntary agencies. It is our aim to work in collaboration with them, not in competition. Our programmes will address the coordination of such factors as: the effective use of irrigation; making waste land productive; the introduction of new crops or seed varieties; the local processing and marketing of crop and livestock production; the establishment of cottage industries. If developed in harmony, these can create a revitalised rural environment.

It is a constant complaint of international donor agencies, financial institutions and commercial banks that there is a shortage of properly prepared projects for funding. One of the AKRSP’s main functions will be the professional preparation of viable project proposals which will assist in channelling new resources, both financial and human, into the areas concerned.

We naturally hope that the AKRSP will submit suitable proposals to your recently opened National Bank for Agriculture and Rural Development. Equally funding may come from overseas sources, with the help of the Aga Khan Foundation.

The Aga Khan Foundation, for those of you who are not aware of its activities, was established in 1967 in Geneva to the Imamat’s principal agency for philanthropic social development programmes to build further on the network of welfare services established by my grandfather and to help resolve social development problems in the Third World. It now has affiliates in seven countries, including India, where we have been most grateful to you, Madam Prime Minister, for your assistance in helping it to establish its philanthropic role.

The Foundation collaborates with many other international agencies, such as UNICEF and the WHO, and was officially recognised by the United Nations Development Programme in 1980. Perhaps because it is a comparatively young organisation, and does not devote unnecessary time to public relations effort, it is not widely known. However, I am told that today it is among the larger international foundations when measured in terms of its yearly commitments in the developing world. I am sure its technical support will be of great value to the AKRSP organisers here.

We equally believe that the worldwide connections of the Foundation will be of assistance in mobilising international financial backing for the AKRSP’s programmes. The Foundation has been registered in Canada, the United States and the United Kingdom, as well as in India, for two main reasons.

One is that this enables it to harness substantial resources which are not available to philanthropic institutions registered in the Third World. For example, when the Aga Khan Foundation Canada assists a project financially, it can obtain matching grants from Canadian Government or State agencies.

Secondly, many members of my Community have settled in the Western World, as have many other Asians. Since Canada, the United States and the United Kingdom do not have exchange control regulations, the Foundation provides our new citizens of those wealthy, industrialised countries with a recognised tax-exempt vehicle enabling them to contribute to our efforts in the Third World.

I am particularly pleased by this development; because I am confident that there are many who will donate most generously to the Foundation’s programmes in the future. Indeed some may even give of their professional skills in the form of personal service for a number of years, helping to establish projects for which their experience is relevant.

The AKRSP will initiate programmes of its own; for example in local training and education, in agricultural information services, and in research, it will also help other development organisations to become self-sustaining including those it has created itself. When this has been achieved and its own programmes in the original areas chosen have been passed on the time will have come for the AKRSP to expand into other parts of India, because one of its aims is to acquire experience applicable elsewhere.

That, however, is for the long-term future. Today, I have the greatest pleasure in formally agreeing to my Community’s recommendation that the funds collected by the Society for the Commemoration of my Silver Jubilee should be utilised to provide the financial corpus of the Aga Khan Rural Support Programme in India. 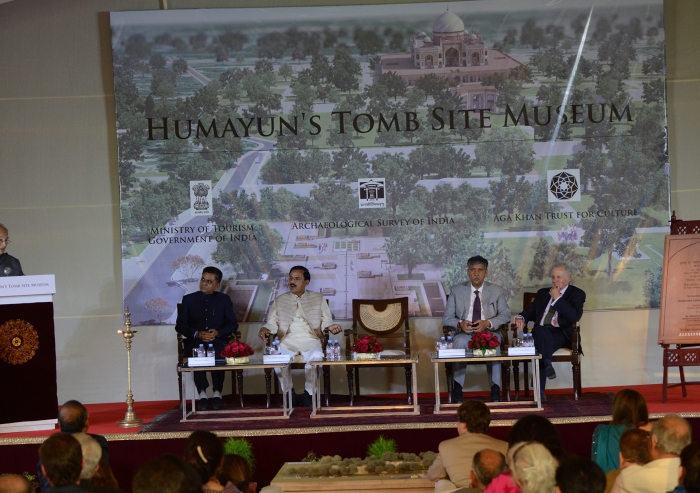