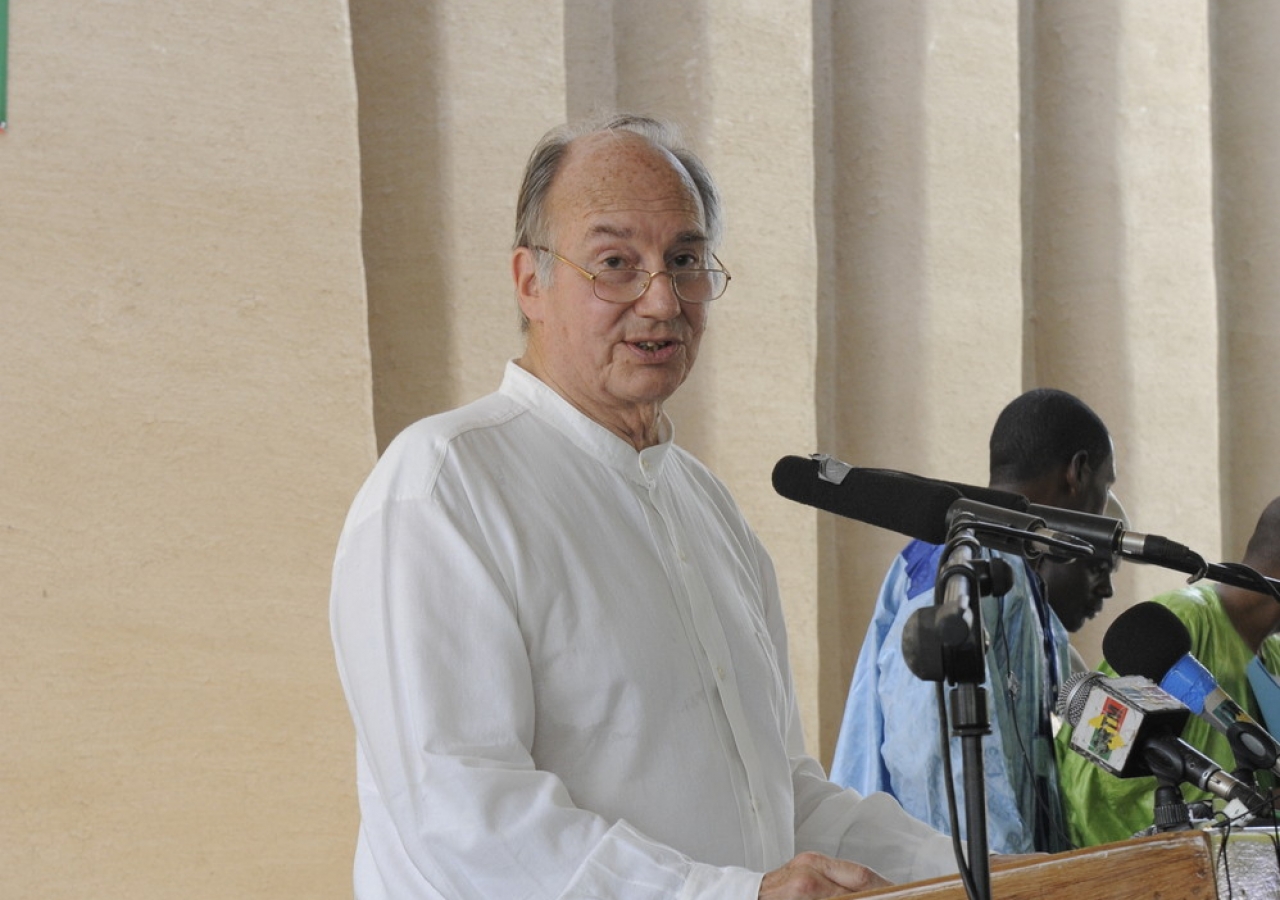 Ceremony of inauguration of the Great Mosque of Mopti

Today I am pleased to be able to inaugurate the newly-restored Great Mosque of Mopti, also known as Komoguel Mosque, and to later visit the various projects currently underway to improve the environment in the historic district of Komoguel.

I should like to extend special thanks to the President of the Republic and the Minister for Territorial Administration and Local Community Affairs for their presence here today and for the support given by the government, regional authorities, the Mayor, Mr Oumar Bathily, the town council, and the Komoguel Local Development Committee to this project.

The significance of this project extends far beyond the physical restoration of the architectural structure of the mosque.

The history of the Ummah has reason to remember the prestige and influence of Mali ’s great mosques. At the height of the empire, in the eighth century, it was from these great seats of learning, these veritable centres of intellectual and spiritual activity, that Islam spread across Africa . It is therefore an immense privilege for me to be able to restore these magnificent mosques. Here in Mopti, and in Djenne or Timbuktu, the great tradition of mud brick building has been revived and the skills acquired can henceforth be put into practice in the construction of all mud brick buildings, whether intended for religious or secular purposes.

The work of revitalising the mosques is gradually being extended to their surrounding neighbourhoods to include all residential accommodation situated in the shadow of the minarets. How wonderfully symbolic it is that the outcome of efforts to restore the mosques should be to improve the quality of life of the people whose lives follow the same rhythm as theirs!

The restoration of the Great Mosque of Mopti is the result of close collaboration between the Ministry of Culture and the National Cultural Heritage Department (DNPC), the regional and local authorities, the Mosque Committee and the Aga Khan Trust for Culture, and of the dedication of numerous professionals and craftspeople from architects and conservation experts to stone masons, bricklayers, plasterers, metal workers, potters and electricians.

This project has made it possible to combine modern heritage conservation techniques with the processes and materials traditionally employed in the construction of mud brick buildings. The participation in the project of the few stone masons who still practice banco pourri has meant that more than 30 young people have been trained in this traditional technique, thus ensuring that is handed down to the next generation.

This is especially relevant in Mali where there is a danger that traditional artisans will gradually disappear, taking with them the skills and knowledge accumulated by previous generations of builders. Hence, restoring this important monument has provided the opportunity to perpetuate a tradition and also to ensure the future conservation of built heritage with appropriate techniques, competently applied.

Many other buildings and villages constructed out of mud which may be less visible but are nonetheless significant in the context of the region are awaiting inspection and urgent protection and will require considerable cooperation on the part of national institutions and international organisations. It is encouraging to know that Mali has been selected to host this year’s international Terra conference on mud brick architecture. In the next few years, the AKTC plans to contribute to this international effort, not only by restoring important buildings but also, in cooperation with the Ministry of Culture, by setting up a national list of mud brick structures, a move that is becoming increasingly urgent in view of the increasing deterioration of the country’s mud brick architectural heritage and the dangers it faces.

In parallel to the restoration of the Great Mosque, the Trust has, in collaboration with Mopti’s local community and other AKDN agencies, launched a pilot project to improve the quality of life of people living in the immediate neighbourhoods, by responding to some of their most pressing needs. The AKTC s’ initial commitment is to improve access to water and to an upgraded sewage network and to put in place social development, vocational training and micro-finance projects.

While these environmental management programmes centering on the mosques are designed to ensure that the whole population will benefit from an improved quality of life, the work nevertheless forms part of a more global vision of urban development.

Indeed, my fear is that urban modernisation will lead to an increase in property speculation and the uncontrolled development of tourist infrastructures which will eventually swallow up the mosques within the urban fabric. Sadly, we see that in many large Muslim cities, the minarets of our mosques, those towering symbols of our faith from the top of which the call to prayer rings out, are lost amid blocks of local authority housing, drowned out by the hubbub of the city.

My hope is that the regeneration of the areas around the mosques will mean the preservation and protection of the heritage of our glorious past which deserves our respect and admiration.
And it is our duty as Muslims to contribute to and to encourage this effort, as the Holy Qu’ran reminds us by commanding us to leave the world in a better condition than that in which we received it, and instructing us to help one another in the performance of good works.