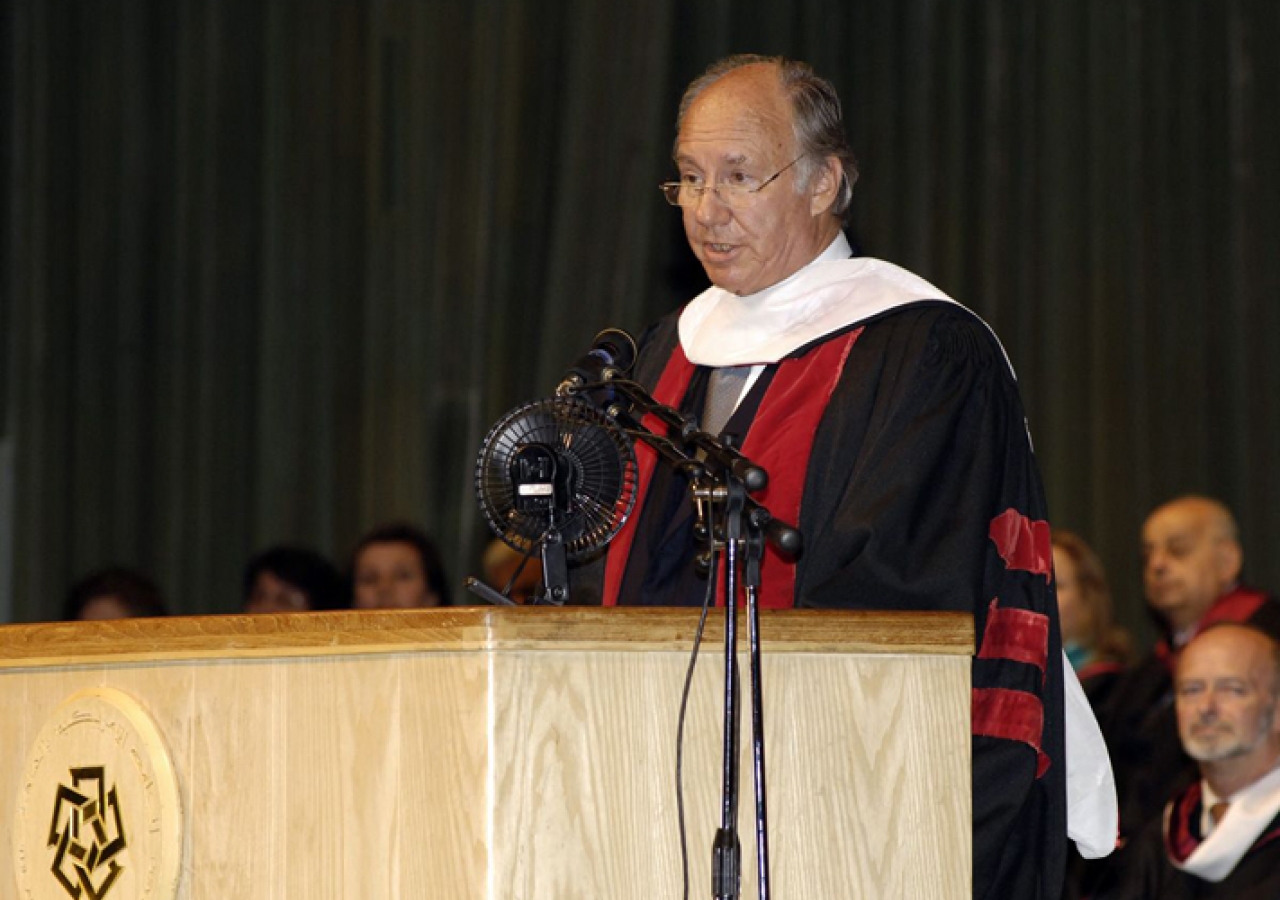 President Arnold,
Members of the Board of Trustees,
Members of the Faculty and Administration,
Parents and Families,
Distinguished guests,
And, most importantly, the Graduating Class
Congratulations

I deeply appreciate your warm welcome and I am most grateful for the wonderful honor you are conferring upon me through this honorary degree. I have long been a great admirer of the American University in Cairo - and I am proud that I can now count myself among your alumni.

This is a very special University. For 87 years, it has been a place for creative and constructive interaction between East and West. Its success has inspired those who see the future as one of intercultural cooperation and collaboration, rather than intercultural clash.

The new campus you are building will be a splendid physical manifestation of that vision. But it is even more important that this vision be manifested in the years ahead in your own, individual lives.

Most of you share with me a common cultural background. I was born into a Muslim family, educated as a Muslim and spent many years studying Muslim history. Then, almost fifty years ago, I became Imam of the Shia Imami Ismaili Muslims, responsible both for interpreting the faith to the community, and for helping improve the quality and security of the community’s daily life. From that day to this, my dominant preoccupation has been with the developing world, and particularly the countries of South and Central Asia, Africa and the Middle East, where Ismailis are concentrated among other Muslim populations.

Over these five decades, I have watched that world oscillate constantly, between hope and disappointment.

Another response has been to revisit past glories - contrasting them with contemporary setbacks. Many Muslims in particular, recall a time when Islamic civilizations were on the cutting edge of world progress. They dream of renewing that heritage. But they are not sure how to do so.

As university graduates, you will be fashioning your own visions for the future and your own ways of fulfilling them. But as you do, I hope you will honor the values of this University. For the one ingredient which holds particular promise in the search for fulfillment, is the search for knowledge.

From the very beginnings of Islam, the search for knowledge has been central to our cultures. I think of the words of Hazrat Ali ibn Abi Talib, the first hereditary Imam of the Shia Muslims, and the last of the four rightly-guided Caliphs after the passing away of the Prophet (may peace be upon Him). In his teachings, Hazrat Ali emphasized that “No honour is like knowledge.” And then he added that “No belief is like modesty and patience, no attainment is like humility, no power is like forbearance, and no support is more reliable than consultation.”

Notice that the virtues endorsed by Hazrat Ali are qualities which subordinate the self and emphasize others - modesty, patience, humility, forbearance and consultation. What he thus is telling us, is that we find knowledge best by admitting first what it is we do not know, and by opening our minds to what others can teach us.

At various times in world history, the locus of knowledge has moved from one centre of learning to another. Europe once came to the Islamic world for intellectual enrichment - and even rediscovered its own classical roots by searching in Arabic texts.

Astronomy, the so-called “Science of the Universe” was a field of particular distinction in Islamic civilization - in sharp contrast to the weakness of Islamic countries in the field of Space research today. In this field, as in others, intellectual leadership is never a static condition, but something which is always shifting and always dynamic.

Indeed, Islamic culture in past centuries was distinctly dynamic - constantly reaching out - both to India and the East and to Europe and the West - for enrichment. Throughout history, confident cultures from every part of the world have been eager to seek new learning, not to dilute inherited traditions but to amplify and extend them. The great civilizations of Islam were prime examples.

More than a millennium ago, as early as the 8th century, the original Abbasids, ruling as Caliphs in Baghdad, set up academies and libraries where new knowledge was honored - independent of its source. The Fatimids continued this tradition - reaching out from their base in Cairo - established in the 10th century - to welcome learned figures from distant lands. A bit later, Ghazni, in Afghanistan, became another center of learning - again by reaching out.

By the time of the Safavid era - halfway through the second millennium - cultural leaders of all types - mathematicians, scientists, painters, musicians, and writers - were moving constantly from country to country and court to court - from the Safavid centers in Iran to the Mughal courts of India, and the Uzbek court at Bukhara in what is now Uzbekistan.

The Ottoman Caliphs in Turkey continued in this proactive tradition in the 19th century, borrowing now from primarily western models. The Ottomans paved the way for the immense modernizations associated with Mustafa Kemal Ataturk in the twentieth century. Ataturk’s reforms brought opposition from ulama and others. Nonetheless, scholars have concluded that “a great part of the population did not see Ataturk and his reforms as hostile to Islam.” Many saw them as extending a well-established pattern.

I believe that same pattern must be our model today. In keeping with our past traditions, and in response to our present needs, we must to go out and find the best of the world’s knowledge - wherever it exists.

But accessing knowledge, is only the first step. The second step - the application of knowledge, is also demanding. Knowledge, after all, can be used well or poorly - for good or evil purposes.

Once we have acquired knowledge, it is important that the ethical guidelines of faith be invoked, helping us apply what we have learned to the highest possible ends. And it is also important that those ends be related to the practical needs of our peoples.

Throughout history, the application of knowledge has often been determined by a few powerful rulers—or by highly dominant governments. But I believe the hour is passing for these outmoded, top-heavy ways of deciding how knowledge should be utilized.

Government’s role will not disappear, of course. But a variety of new factors are at play--the vast complexity of economic life, the growing pluralism of society, the splintering and decentralization of information media, and the fragmentation of cultural identity. And all of these factors argue for a more diverse approach.

The great effort of humankind to organize itself for the common good must change with changing environments. For thousands of years our environment was largely agricultural, where value attached primarily to land. Three centuries ago, agriculture began to yield to industry, as machines took center stage, along with standardized processes and the efficiencies of scale.

But in the last few decades, Agricultural Society and Industrial Society have gradually been displaced by what has been called the Knowledge Society, propelled by new digital technology and the expansion of cyberspace.

As a result, enormous social influence has been transferred from the owners and workers of farms and factories, to those whom we now call “Knowledge Workers,” people who create and exchange information. For them, power attaches more to ideas and values than to money or physical force. Among them, power itself is widely dispersed.

In such a time, we need to depend less on government and more on what I call the institutions of civil society. These civil institutions are normally private and voluntary - but they are committed to the public good. They include entities dedicated to education and research, labour and commerce, health and the environment, culture and religion.

Civil institutions can thrive even when governments falter. But they cannot thrive unless governments and citizens also place a high value on diversity, and create a supportive environment for non-governmental initiatives. The graduates of the American University in Cairo can play a critical role in that process.

To do this however, will mean confronting the “knowledge deficit” which now plagues too many Islamic societies. Happily, technology has given us wonderful new ways of sharing knowledge. Rather than sending scholars over thousands of miles and scores of years, from library to library and academy to academy, today we can simply click in a matter of seconds onto a wide variety of appropriate websites. But, first, we must acknowledge what it is that we do not yet know - committing ourselves to continued learning and accepting the fact that useful knowledge will often be found by reaching beyond the traditional barriers of both geography and culture.

The most valuable part of your University education may not lie merely in the content of what you have learned here, but in your improved ability to go on learning for the rest of your lives.

One certain contributor to the knowledge deficit in large parts of the Islamic world has been the disconnect between weak universities, and the requirements of modern economies. We must understand the intimate connection between the economy of any country and the research agenda of its universities - the fact that research requires the intimate involvement of economic institutions, and that economic development requires the support and the stimulus of cutting edge research.

All of this will help explain why our Aga Khan Development Network has placed such a high priority on the development of Aga Khan supported Universities and Academies in parts of the developing world. And it will also explain my admiration for the work of this University. Along with similar, sister institutions, AUC has effectively combined values and requirements of the Islamic world with educational resources from the Western world. In doing so, it marks a promising pathway to the future.

As graduates of this university, you have already begun your journey down that path - and you are ideally placed to lead others along it. This calling is your special responsibility. But you can take up this obligation knowing that you are well equipped for the road ahead.

In the long sweep of human history, Egypt has been among the first and most distinguished centers of world learning. Building on those traditions, this country and this region can again play a central role in the Knowledge Society of the future - and each of you can be a vital part of that exciting process.

May Allah accompany you.