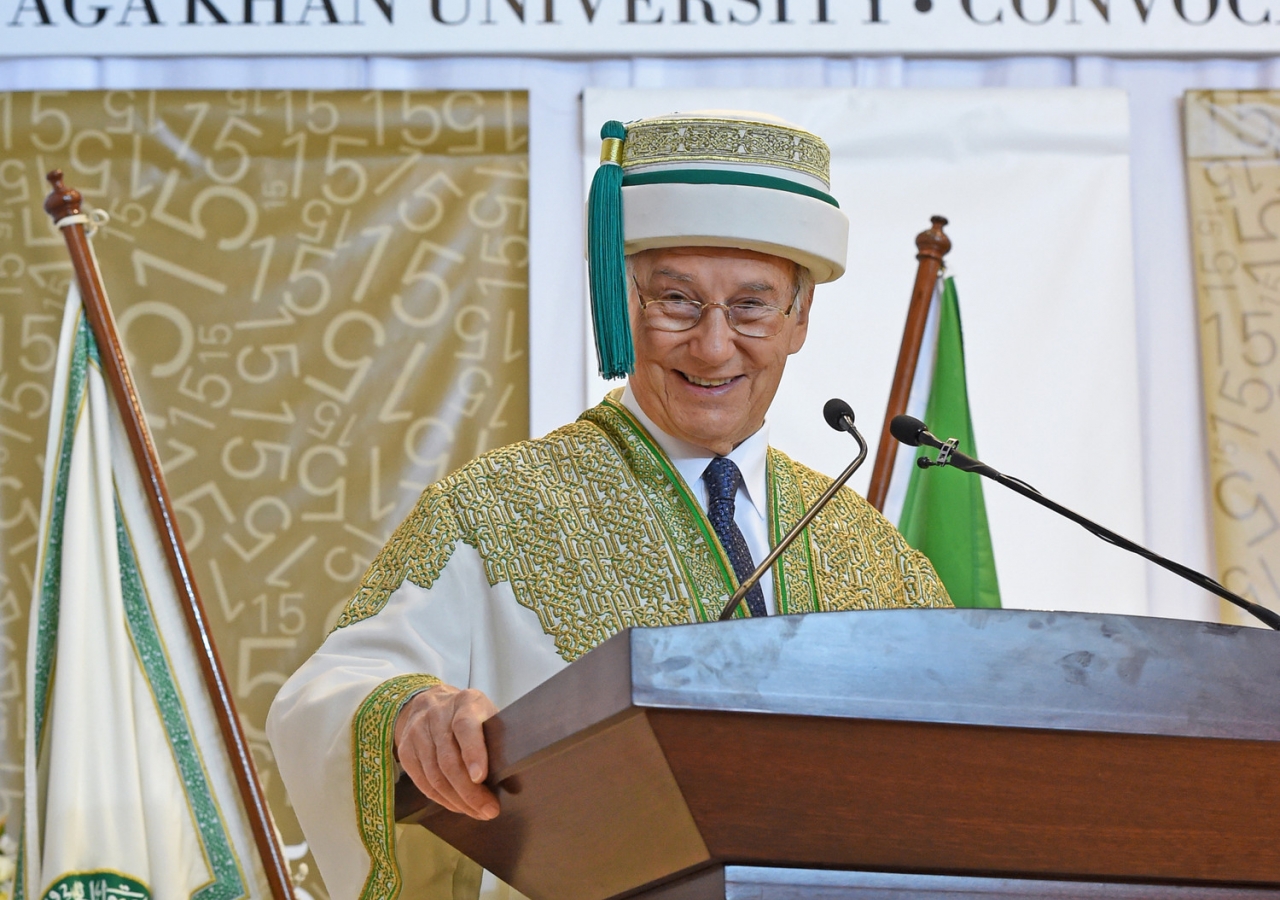 “As we look to the future, I am increasingly impressed by one overriding insight. It reflects the vast flow of information that has come my way as I have watched the ups and downs of the developing world. More and more, I am convinced that the key to improving the quality of human life, both in places that are gifted with good governments and in places that are not so fortunate, is the quality of what I describe as Civil Society.”

What a remarkable day this is – and what a pleasure it is to be here.

This is a very important day in your lives, of course, and I must say that this first chance to share in an East African AKU convocation makes this a singular day in my life, as well.

As your Chancellor, it was I who first proposed to our Trustees that AKU should expand from Asia to Africa, to meet its chartered international mandate. Therefore it was with particular happiness that I received the Charter for the Aga Khan University from President Kikwete yesterday at a ceremony at State House. This is the first Charter in Tanzania granted to an international University. It reflects, I believe, AKU’s demonstrable record of producing outstanding graduates in Tanzania for the last 13 years. This is a historic milestone as it sets the stage for expanding the University and introducing new schools, faculties and institutes in Tanzania and the region.

In the search for Africa’s development, how can any of us forget that throughout human history there has never been greatness without expanded knowledge? And is that not the precise purpose of a great University?

That transformation, of course, symbolizes the transformation you have experienced throughout your time at the Aga Khan University. You may look the same as you did when you arrived here for the first time – perhaps slightly plumper, or skinnier, or balder, or grayer – but surely a great deal more fascinating. And more confident, too, I would hope, in your ability to contribute to the betterment of our world. The degree or diploma that you receive today is something you will take with you for the rest of your lives. The education you have achieved here is something that no one can ever take away.

Like each of you, personally, the University also remembers its heritage on a day like this. That heritage is rooted in the rich history of Islamic intellectual accomplishment – including the work of my own ancestors in ancient Cairo 1000 years ago, when they founded the Azhar University and the Dar-ul-ilm – the House of Knowledge. This story continued over several centuries, as Muslim centers of scholarship and culture involved and inspired people of many traditions and faith communities. A respect for diversity – a welcoming, cosmopolitan ethic – has been a hallmark of this heritage – an increasingly relevant legacy in the emerging “borderless” world that President Rasul has so aptly described.

It was this heritage that inspired my grandfather, as Imam of the Ismaili Muslim community, to make education a top priority. In fact, he started the first Aga Khan School in Africa over 110 years ago in Bagamoyo, here in Tanzania. And that same legacy was in our minds when we began planning for this new Aga Khan University.

I well remember those conversations – as early as in 1975 – and I remember them, to be exact. We asked a host of questions and a host of wise people helped us address them. Harvard University drew up our blue print. Our biggest question was whether a new university in Asia and Africa, in this day and age, could achieve sufficient levels of excellence as measured by world standards.

Well, we decided to try it. The Aga Khan University was founded in Karachi in 1983. It recently celebrated its 30 year anniversary. And then, in the year 2000, we expanded into East Africa.

Today, the Aga Khan University remains the only privately supported University with major academic programs on both the Asian and the African continents. Over a relatively short time span, we have extended our work into eight different countries. We created two degree or diploma programs in the 1980s, two more in the 1990s, and another 21 programs since the year 2000. Altogether, we have graduated over twelve thousand students – over 2000 here in East Africa. And you will soon become the most recent!

Altogether in these 15 years some 1900 nurses have been trained here, almost half of them earning Bachelor of Nursing degrees. So have some 3000 teachers, including 250 with Masters of Education degrees. But the most important point is the multiplier effect that you can have as you pass along your skills and your standards. I think, for example, of programs which have trained almost 1000 head-teachers of secondary schools – just in the last year – a striking example of this powerful multiplier potential.

The quality of these programs has been endorsed not only by the World Health Organization, but by standard setters such as the UK College of Physicians and Surgeons and the US Joint Commission International. But the best endorsement, by far, is the success of our graduates, when they take licensing exams, or apply to other schools, or go to work for new employers.

In the end, however, our most important accomplishments are not measured by quantity – but by quality. It’s not so much that twelve thousand people were educated at AKU, but rather that ONE person was educated here and that this individual life-transforming story has happened, now, some twelve thousand times.

As we look to the future, I am increasingly impressed by one overriding insight. It reflects the vast flow of information that has come my way as I have watched the ups and downs of the developing world. More and more, I am convinced that the key to improving the quality of human life, both in places that are gifted with good governments and in places that are not so fortunate, is the quality of what I describe as Civil Society.

By Civil Society I mean that array of institutions which are neither public, nor profit driven, but which are motivated by voluntary commitments and dedicated to the public good. They include, for example, institutions dedicated to culture, to public information, to the environment and to religious faith. And they include, very importantly, the fields of health and education in which you are so centrally involved.

A healthy Civil Society is a meritocratic one, where ethics are honored, and excellence is valued. And the great question now confronting us here in Africa is how rapidly the institutions of a healthy Civil Society can be established and reinforced. In this process, the role of the University will be central as it advances and shares new knowledge.

From the start over thirty years ago, this University’s founding blueprint envisioned a multi-campus, multi-continental university – comprehensive, broadly integrated, and research- driven. That vision, as you have heard, is now coming true. A major building block will be our new campus in Arusha – opening in just four years – as home to our new Faculty of Arts and Sciences, plus two Professional Graduate Schools. When you visit the Arusha campus in a few years you will also see a new teaching hospital, a training hotel, new community schools and housing facilities, a technology and research park, and an important new library.

Other AKU initiatives, across the region, as the President has mentioned, include our Graduate School of Media and Communications, opening this year in Nairobi. Other Graduate Schools will follow – specifically designed to advance a healthy Civil Society – in specific African contexts. They will include Schools of Leadership and Management; Hospitality, Leisure and Tourism; Architecture and Human Settlements; Government, Civil Society and Public Policy; Economic Growth and Development; Law; and Education.

At the same time, a new campus in Dar es Salaam will house the Institute for Educational Development. Our Faculty of Health Sciences will develop new undergraduate medical and nursing programs in Kenya, a new teaching hospital and medical outreach centres in Uganda, and post-graduate residency programs throughout the region. So, as the East African Community is built politically, so will AKU become increasingly regional. Meanwhile, we will continue to expand our inter-university partnerships across the world, lending further global credibility to our work – and to your degree.

That is a long list of new initiatives, but not an unrealistic one, any more than it was unrealistic to plan for an intercontinental University three decades ago. And let me emphasize that we see these various units as integrated parts of one University, working closely together – across academic disciplines and also across nations and continents – in our increasingly “borderless” world.

These developments also mean that AKU will continue to be a valuable reference point for you, with its Africa and Asia-specific research, and its Continuing Education opportunities. Even as the AKU story develops, so can your relationship with the University.

Let me put you on notice! This is not a Farewell Ceremony! In fact, an event like this is often called a “Commencement”, since it marks the beginning of so many great new stories. We hope that you will share your stories with us, in the days ahead. And we hope, whenever possible, that you will continue to be a part of the University’s story.

And so it is that we come together, today, both as grateful inheritors, looking back on an accomplished past – and as eager explorers – looking ahead to an exciting future.
It has been an honor for me to share this day with all of you. 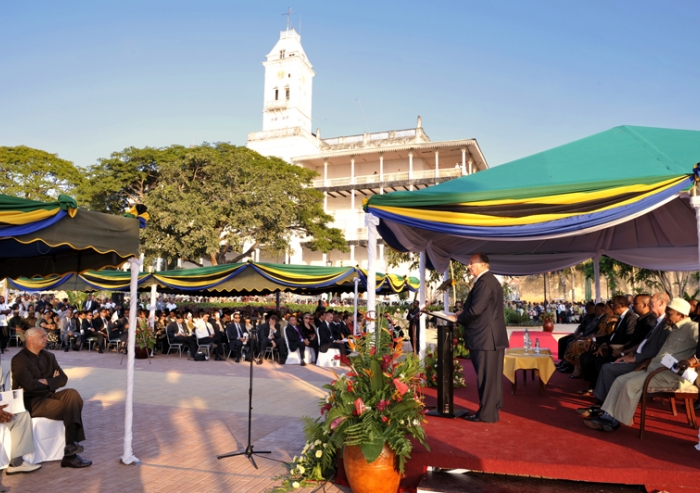 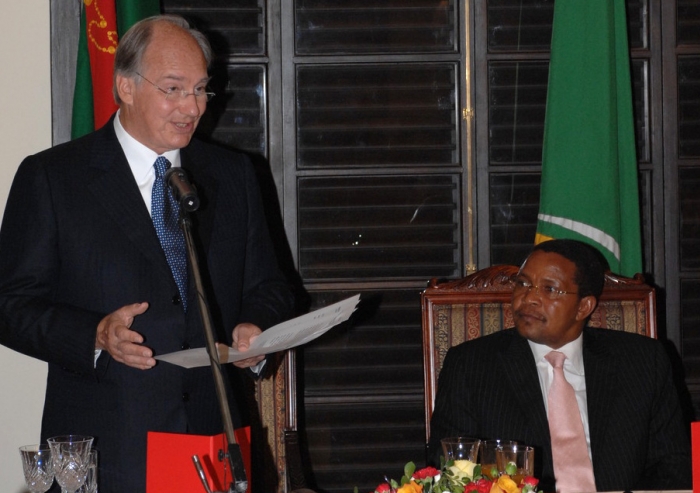