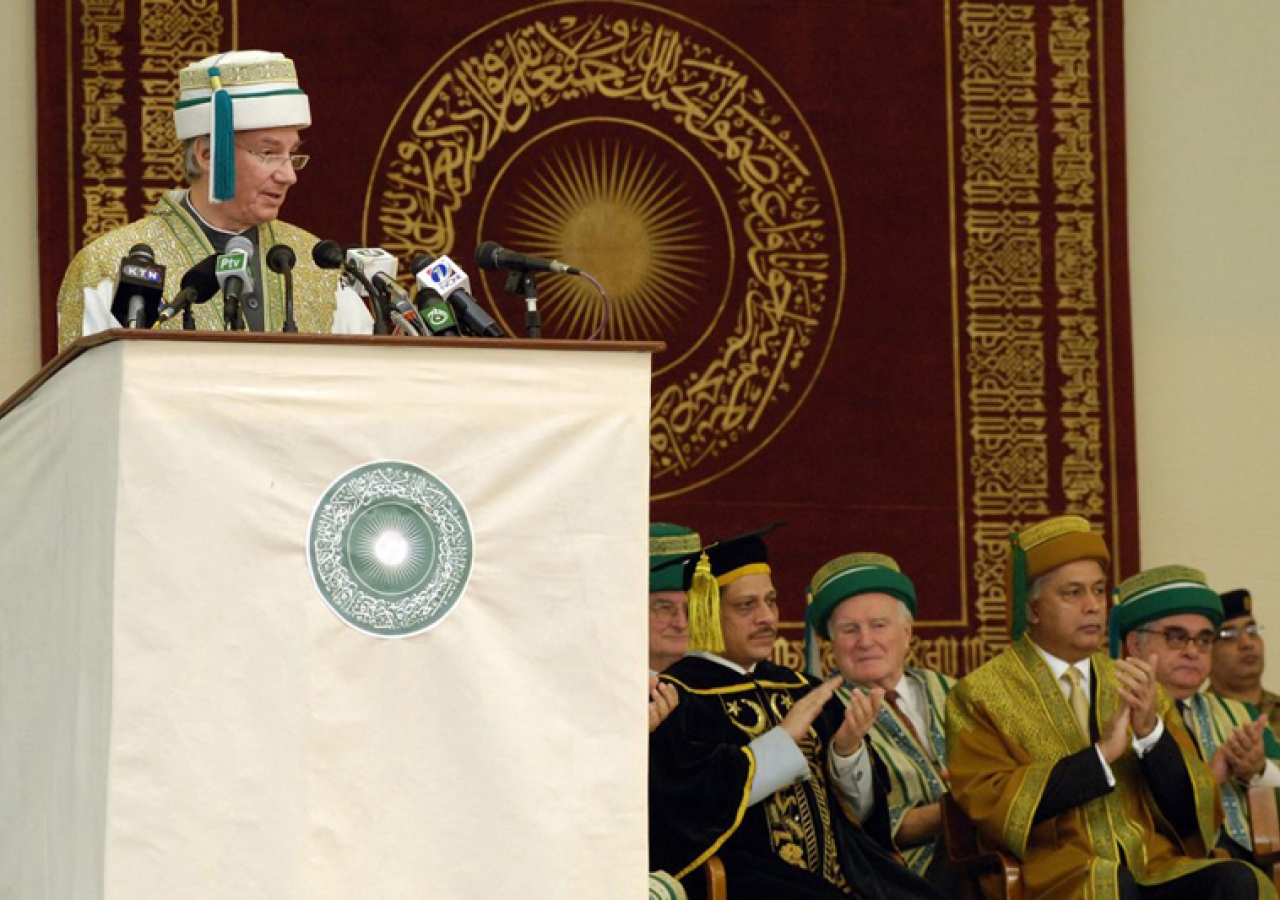 Your Excellency
Prime Minister Shaukat Aziz
Your Excellency Governor Ishrat-ul-Ebad Honourable
Chief Minister Arbab Ghulam Rahim
Honourable Ministers
Excellencies
Chairman Dehlavi and the Members of the Board of Trustees
President Kassim-Lakha
Graduates and Parents
Generous donors and well wishers of the University, from Pakistan and around the world
Distinguished guests

The presence here this morning of Your Excellency the Prime Minister, for which I thank you most deeply, is a visible tribute to this nation’s resilience and determination not to be overcome by a tragedy of vast proportions. Scarcely two months ago in Kashmir and the North West Frontier Province, tens of thousands of our brothers, sisters and their children lost their lives, communities were split apart and local economies were shattered by the forces of nature. The Ummah and the world at large grieve with Pakistan. We pray for the eternal peace of those who died; for the relief and comfort of the grievously injured; and for the consolation and courage of their families. Ultimately, our refuge must be in the promise of the all-encompassing mercy of our Lord Allah, the most beneficent, the most merciful. Despondency, therefore, is a betrayal of our faith. The future must be faced and rebuilt on a sounder basis.

Despite these sad circumstances it is a great pleasure to be here to rejoice with parents and friends in the steadfastness and the achievements of our new graduates. We rejoice not only because you have become promising nurses, physicians, educators and researchers, but because at AKU you have also become educated men and women with expanded powers of reason and reflection. As you now prepare to leave your University years, I congratulate you and I wish for you the blessings and deep satisfactions that can come from using all your powers in service to the progress of mankind. Your gifts, your hard work and the devotion of your professors have prepared you well. You are eagerly awaited by us and by a world of grave and sudden needs.

The earthquake has brutally reminded this University of the reason for its existence. World communications beam instantly around the globe the image of death and misery - of earthquakes, tsunami, plague, and of man-made disasters of violence and hatred. For a time, they capture the world’s attention and generosity. Governments, themselves overwhelmed, do their best and carry most of the burden of the basic recovery. But they and the world’s donors must very often look to existing, specialized, non-governmental organizations that have the knowledge, professional manpower and experience to respond to the great array of ills that follow social trauma.

In what way has the Aga Khan University contributed to facing this national tragedy and how should its happening affect future education at AKU?

First, the most enduring work done by many of the AKU response teams, notably in the realm of public health, has been to create model health programs and health surveillance systems on the ground and train the people to run them. These systems had for years been studied and tested and training programs were developed by the Aga Khan Health Service and by AKU’s Department of Community Health Science. Our hope is that the disaster will eventually leave, at least in some respects, stronger communities.

Second, the effectiveness of AKU’s response to this highly complex human disaster was materially increased because the University is part of the Aga Khan Development Network. The Aga Khan Health Service had for several decades been studying and working with mountain people and villages; the Aga Khan Building and Planning Service was able to share its methodology for constructing temporary shelter and seismic-resistant construction; and the Aga Khan Foundation helicopters provided the transportation of materials and evacuation of serious casualties.

We may take pride in all of this, but the fact is that AKU does not teach about architecture and land planning, nor environmental studies such as climatology, nor engineering and seismology, nor habitat change, nor the means to convey such knowledge to civil societies, as is so evidently needed for the rebuilding of Kashmir.

The tragedy of the earthquake raises in quite clear terms a central question for AKU and other universities in Pakistan: What should be the next areas of education to which AKU should devote itself, and is higher education in this country preparing future generations for Pakistan’s needs? Shamsh Kassim-Lakha has shared with you some of AKU’s plans for the future. The Trustees and I are also considering areas such as architecture and the built environment, including land planning, as well as governance and civil society, and fortunately these would appear to be some of the areas of knowledge that would be required in order to face, better, a further major earthquake. Sadly, AKU does not yet offer education in these fields but it does seem that another tragedy of such a nature would require a response from men and women educated in such areas, which have been pre-selected in the University’s forward academic planning.

Today’s University is the work of many hands and generous spirits. But the substance and quality of today’s AKU owes a very great deal to the determination, energies and loyalty of its first president. Shamsh Kassim-Lakha has led AKU - Pakistan’s first, fully fledged private university - through its construction, the promulgation of its Charter, the establishment of its Medical Center and the outreach of its programs.

Universities have long periods of development and change, as the President has often noted, and I know that he has thought for some time that AKU was nearing the point at which the baton should be passed to a leader who would carry it to its next plateau. I have agreed, with the understanding that the change should occur only when a person of the highest personal, intellectual and professional qualities could be found.

I am happy to be able to say that I have recently proposed to the Board of Trustees the name of Mr Firoz Rasul. Mr Rasul has demonstrated outstanding leadership qualities for which he has received national recognition and respect within Canada. He has been one of Canada’s most successful entrepreneurs and has served as a member of the Board of Governors of the University of British Columbia. His wife Saida was recently appointed Chairman of the Board of Governors of Simon Fraser University. He has also overseen major projects for me in Canada: the development of the Global Centre for Pluralism and the Delegation of the Ismaili Imamat building in Ottawa; and the Aga Khan Museum and the Ismaili Centre in Toronto.

It gives me great pleasure to introduce you to Firoz Rasul, the next president of AKU; and to give my warmest and my deepest thanks to Shamsh Kassim-Lakha, who has brought the University to its present level of distinction.

The University now stands at a new threshold of needs, aspiration and potential, but I believe its course is clearer, and secure, as it approaches its leadership transition.

Much of my confidence rests with the support AKU has received, without fail, from the Government of Pakistan and of the Provincial Government of Sindh, and of the enormous generosity of thousands of donors here and abroad. To them, I express my deep, deep gratitude.

AKU’s leadership is changing at a time when, beyond national boundaries, it is in the field of education that reflection is most desperately needed. Many countries, nations at widely diverse stages of economic and social development, are expressing grave doubts about the effectiveness of their systems of education to develop the intellectual and moral talent they need to function in the modern world - and to engage all levels of their societies.

This vital work in education must be highly sensitive to local conditions, gain the confidence of parents and children and communities and draw upon the best research into brain development, nutrition, and learning theory. But it must also grasp the role and the importance of local values, for educational change is also a deeply moral enterprise. It will only flourish as part of a revitalization of our societies.

A great risk to the modernization of the Islamic world is identity loss - the blind assumption that we should give up all our essential values and cultural expressions to those of other civilizations. In order to contain this risk, for it cannot be totally eliminated, we must re-invigorate our own value systems and cultural expressions. This includes the sciences and the ethical structures that go with them, but also architecture and the design of landscape and towns, literature, music, philosophical thought, and the free space they require, which are unfailing signs of a nation’s vitality and confidence.

This is the frame within which AKU will function in the years ahead. It is also the world of yearning, hope and creative possibilities that our graduates will enter. 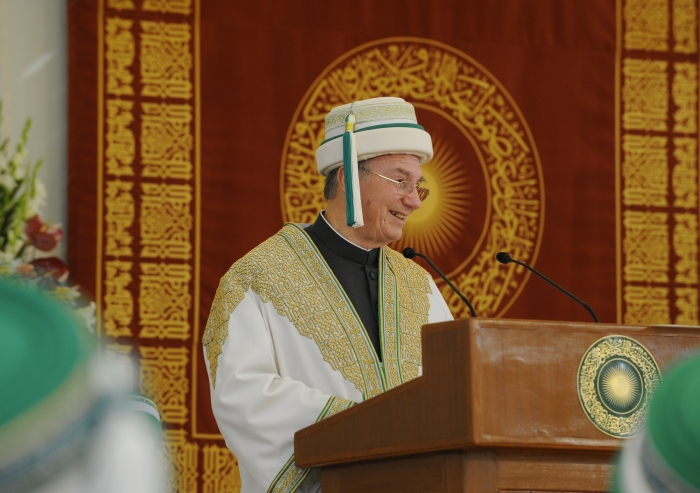 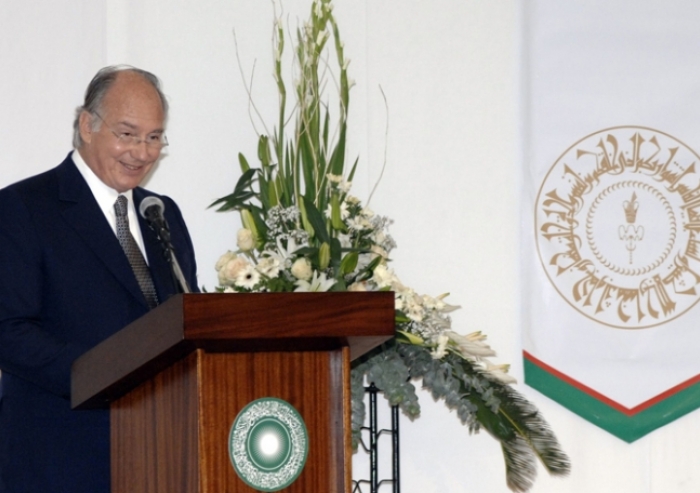