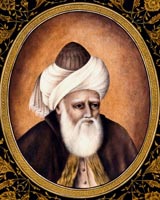 This year marks the 800th birthday of Mawlana Jalaluddin Mohammad al-Balkhi al-Rumi, one of Islamic civilisation's greatest spiritual masters and mystic poets (and a best-selling poet in the United States). Mawlana Rumi (1207-1273) was born in Balkh which is today located in Afghanistan. To honour his vast contributions, celebrations are being held around the world. The United Nations Educational, Scientific and Cultural Organisation (UNESCO) declared 2007 as the "International Rumi Year" Upon the designation by UNESCO, the three countries that Rumi had lived in during his lifetime: Iran, Turkey and Afghanistan are holding special programmes commemorating the man and his philosophy.

On 16 April 2007, in Afghanistan at Nakhustin Jamatkhana in Kabul, the Ismaili Volunteer Corps. and other young members of the Jamat organized an auspicious ceremony to commemorate Rumi's contribution to Islamic spirituality.

During the ceremony, Qur'anic verses, and a qasida composed by Mawlana Rumi were recited. Young volunteers also recounted Mawlana Rumi's life and achievements. A poetry exposition saw members of the Jamat role-play poems from the Diwan-e Shams-e Tabrizi, an epic poem named in honour of Shams Tabrizi - a figure who greatly influenced Mawlana Rumi's thoughts and beliefs. The narrations included an explanation of the love and devotion he held for Tabrizi and the sadness Rumi felt when they were separated.

The programme concluded with a look at Mawlana Rumi's writings and poetry which include six books of the Masnavi (spiritual couplets) and the Diwan-e Shams-e Tabrizi.

Shair Baz Hakemy, President of the Ismaili Council for Afghanistan spoke about Mawlana Rumi's journey, noting that Rumi was searching for the meaning of life and that the purpose of his poetry was to get in touch with the divine spirit that dwells within all of us. The message in Rumi's poetry is love and unity - a message for all of humanity.