Selections for the Golden Jubilee Games in Afghanistan began in the Autumn of 2007. Qualification rounds in various sports took place in the provinces of Badakhshan, Baghlan, Bamyan and Kabul, and an excited national Jamati team is now preparing to join their brothers and sisters in Nairobi, Kenya. 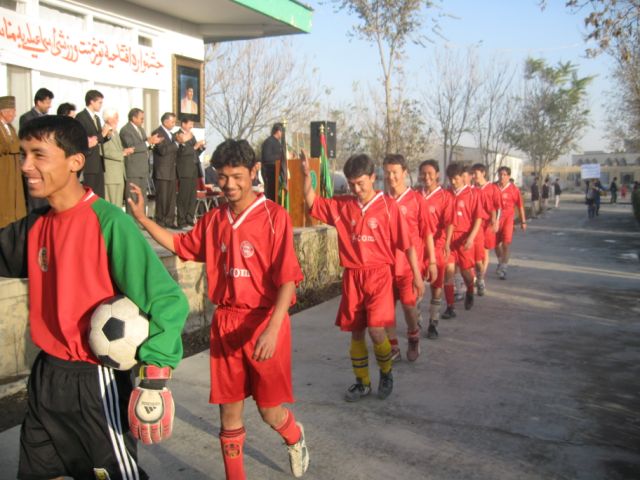 Members of one of Afghanistan's Ismaili football teams are applauded during the inauguration ceremonies. Courtesy the Ismaili Council for Afghanistan

Selections for the Golden Jubilee Games in Afghanistan began in the Autumn of 2007. With few indoor athletic facilities in the country, regional and national trials had to be scheduled before the onset of the harsh winter.

The qualification process was inaugurated with an impressive ceremony held at Umomi Jamatkhana in Kabul. Athletes stood at attention as both the Afghan and Ismaili flags were carried into the Jamatkhana courtyard. They then marched in formation in front of the gathered dignitaries and members of the Jamat.

Following the inauguration, a series of athletic contests were scheduled across the country. Regional sports festivals took place in the provinces of Badakhshan, Baghlan, Bamyan and Kabul.

In November, the Ismaili Council for Afghanistan hosted the Jamat's first major football tournament at the Olympic Stadium in Kabul. Audiences braved cold weather and cheered-on the athletes as 16 teams competed over three days, culminating in a thrilling championship match. Much to the delight of their loyal fans, the team from Charqala won the final match 1-0. Judges from the Afghan National Football Team were on hand to observe all of the players, and helped to select the squad that will be going to Kenya.

Members of the winning football teams celebrate their victories following the football tournament. Courtesy the Ismaili Council for Afghanistan

This will be the first trip to Kenya for the entire Afghan team – for many, it will be their first time flying in an airplane. The palpable excitement is matched by their dedication to training. The wrestling team is undergoing intensive preparations, while the football team practices at 4:30 AM every day. The women's volleyball team trains at facilities provided by the French Medical Institute for Children.

“We are excited about Kenya,” says one athlete, “not only to compete and represent the Afghanistan Jamat, but to meet and become friends with our brothers and sisters from around the world.”