Calligraphy is the art of beautiful writing, found in many cultures around the world. It has particular significance for Muslims as this writing style is often used to transcribe the words of the Holy Qur'an. The first verse revealed, reflects the words: "Recite, in the name of Your Lord…who taught by the pen." (Surah al-Alaq, 96:1) Today, calligraphy is practiced as a recreational activity by artists of all ages and abilities.

In the early days of Islam, writing became the medium that reflected the Divine message. Though there are several styles of calligraphic script, they all attempt to express the written word through artistic imagery. Such calligraphy appears on monuments, in mosques and sacred spaces, books, sculptures, textiles, ceramics, and glassware.

As Prince Amyn explained at the opening of the Zamana Gallery at the Ismaili Centre in London in 1989, “The written word, as a symbol with both religious and aesthetic significance, is pervasive and is as important as it was several thousand years ago.”

Today, the art of calligraphy has found a new lease of life, practiced by more and more artists, and often aided by advances in technology. A number of artists from the United States and Canada are using calligraphy to express the written word through art, some using the traditional methods, and others experimenting with new technology.

Hamida Madhani, from Atlanta, explains her experience of beauty and its relationship to forms and objects, saying, "I feel as artists we need to understand the technology of the day. Knowledge gives us choices with our art and creativity, and staying on top of our medium gives us the ability to create in new and exciting ways." Hamida creates art to understand the spiritual nature of existence, drawing upon her multicultural heritage to explore Islamic, Western, and Chinese culture in the process.

"My thinking always took place in the realm of imagery," says Hamida, adding,  "Beauty and harmony, structure and order, selection and organization, were all for me a natural result of thinking with the senses." Her compositions indeed illustrate both her talent and the thought behind them.

Hamida spoke at an international conference in London in 2011, where she discussed the topic, From Art to Spirituality- My Personal Journey," and her artwork was displayed at the Ismaili Centre in London. Later, she was invited to present her art at the Western Art Shore Museum, near Beijing, at a show titled, Synthesis. Her 22 pieces included abstract art, as well as her calligraphy.

Computer graphics have also been used by Edmonton's Shamas Nanji for his modernist expression of Arabic calligraphy.

"Isn't it wonderful that research at the infinitesimal level has given the world new instruments to celebrate the infinite?" remarks Shamas, discussing the use of computers to create art. His words reflect those of Abu'l Fazal (d. 1602) of Mughal times who wrote: "The written letter is spiritual geometry emanating from the pen of invention."

Referring to his computer as an "electronic reed," Shamas draws his inspiration from the hadith, "Allah is beautiful and he loves beauty," as he creates his large scale calligraphic creations and murals. From his work entitled Basmallah, linear and austere, to the more whimsical Ya Ali Madad, the importance of empty space to frame the words is clear. The creations all express symmetry and balance, depicting the contemplative spirit behind the work.

It was while pursuing a graduate degree at the Institute of Islamic Studies at McGill University, that calligraphy became a hobby. Shamas's calligraphy has been shown at the Ismaili Centres in London and Vancouver, Roy Thomson Hall in Toronto, and at the University of Waterloo.

After graduating from college, Nizar MacNojia worked as a graphic designer in Karachi, and also learned different painting techniques from friends attending the Fine Art Institute in the city.

Nizar's first exhibition was in Karachi, in 1983, and since moving to Houston he has focused on calligraphic renderings of Qur'anic verses. "Calligraphy accentuates the value that is placed on language, specifically Arabic,” explains Nizar. Of these verses and of the ginans, which have inspired Nizar, he remarks: “I wanted to place them in a different language – the language of art.”

Various exhibitions have featured Nizar's art, including at the Jubilee Arts International Arts Festival in Lisbon in 2018, and he has also demonstrated calligraphy at Houston's Museum of Fine Arts. In 2017, he displayed his work at an exhibition entitled Arts of the Islamic World, at Houston's City Hall, where one of his works was presented to Mayor Sylvester Turner.

Zarina Boga and her art are well-known in Calgary, where she has hosted numerous exhibitions. From paintings to ceramics and calligraphy, this versatile artist has a vast collection of work, and has attracted an international following.

"Bridging past artwork into the present," is how she describes her creations. Originally from Tanzania, she prefers the tactile sensation of clay, moulding plates, vases, bowls  and other items into artistic pieces, often with traditional motifs. "To me, it's a prayer, when I am working on my art," Zarina explains, and "It's a meditation. Inscribing the names of Allah brings joy to my physical and spiritual senses."

Zarina has received many accolades for her contributions to civic organizations in Calgary, including the Award for Racial Harmony, in addition to awards for her art. She was commissioned to create a piece for the Alberta Human Rights Commission, while others were donated to the Aga Khan Foundation Canada, the Human Rights Foundation, and United Way. 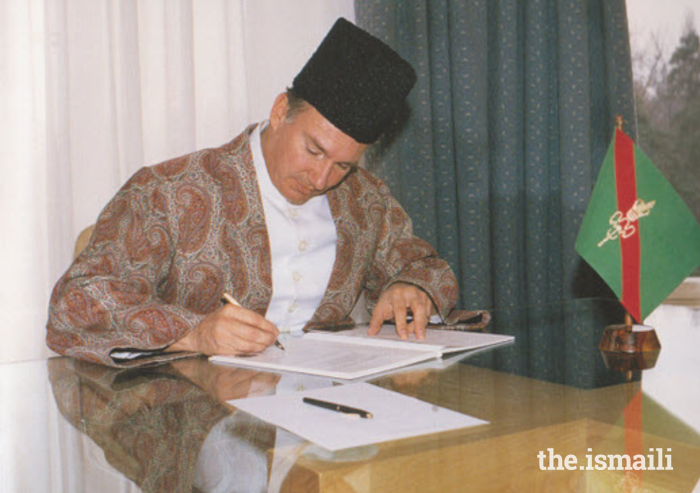