The.Ismaili is pleased to publish an interview with Dr Amyn Sajoo, a specialist in international human rights, civil society, and public ethics. As part of a series of interviews with key figures, Dr Sajoo discusses the notion of civil society, its history, significance, and potential to enrich democratic life around the world.

Why is there such emphasis today on the idea of civil society — including by Mawlana Hazar Imam, with regard to both global and community settings ?

Whether in the West or in the developing world, nation states have become a very strong presence in our daily lives.  More than ever, they now have the capacity to deeply influence our social and economic wellbeing.  Civil society is where ordinary men and women, acting as individuals and communities, take the initiative to advance what matters most to them.  They do this with proper respect for the law of the land, and for official institutions, often in partnership with them.  But they do not wait for the state to act.  Civil society provides shelter for the homeless, food for the hungry, support for refugees, protection for children and vulnerable adults.

Each time that Mawlana Hazar Imam has referred to civil society over the past two decades, there has been an emphasis on action — notably by Jamati and AKDN institutions — in terms of mobilising on issues ranging from health and housing, to cultural heritage and the environment.  The ‘social conscience’ that these institutions highlight is exactly what civil society is about, although it's an active conscience that speaks through specific initiatives.  For example, the Aga Khan Award for Architecture does not just reward elegant buildings in Muslim societies.  It is about recognising socially-responsible schools and homes, hotels and parks, even airports, that take seriously the people and environments they are meant to serve.  Without the ethical dimension, we'd be at the mercy of the modern market and state – money and politics – even more than we already are.

Historically, what has been the role of civil society in Muslim contexts?

The idea of a space where individuals and communities could come together for the public good — civic culture — goes back to the foundations of Islam.  The ummah of Prophet Muhammad (peace be upon him and his family) in Medina was not only a faith community but also a civic one, which included Jews and Christians, committed to the welfare of each member.  Especially vital to this ethos was the equality, in practice, of the poor and those who were disadvantaged because of their social status (such as not being part of the dominant clans).  Perhaps the finest written elaboration of this is the letter written by Hazrat Ali as the caliph (656-661 CE) to Malik al-Ashtar on his appointment in 658 as the governor of Egypt.  The letter makes the governor accountable not to elites, but to the least powerful of citizens.  For each is either “your brother in religion, or your like in creation.”  Hence, there are ethical ties between people that are of a higher order than the usual power relationships of political and economic life.  This became part of the moral message of what is generally called the Shari'a, which is ultimately an ethical framework of striving for the public good, at the individual as well as the communal level.  Values such as charity, fair-dealing, and consultation are embedded in both Shi'a and Sunni traditions as core parts of civic culture.

An old slogan says that civil society is “life between elections.”  It's the lifeblood that flows in civic arteries and veins — from parent-teacher meetings, bake sales, and professional development courses to blogging, protests, and trade union activism — that allows us to become real citizens.  Without this kind of participation by ordinary people in ordinary times, ‘democracy’ is too remote, formal, and perhaps pretentious.  People don't vote unless they find it relevant and are engaged, which is what civil society can enable.  It's about political literacy too; the knowledge that allows informed democratic choices.  “Even when governments are fragile, or even nearly paralysed in their functioning,” Mawlana Hazar Imam noted at the University of Alberta in 2009, “strong civil society organisations can advance the social and economic order.”

Take the example of BRAC, the world's largest non-governmental organisation with over 97,000 employees, which fights extreme poverty in Bangladesh and wider South Asia.  BRAC has partnered with AKDN since 2005; lessons learned are applied globally.  What does this do for democracy?  It enables masses of very poor men and women to go beyond survival (and little interest in formal politics) to having the time and capacity to act for positive change.  Another example is the women’s empowerment movement that challenges our understanding of gender equity.  It has largely taken concerned citizens, not governments, to do this.  And it is slowly but surely altering expectations of ethical and professional standards in social, economic, and political life. 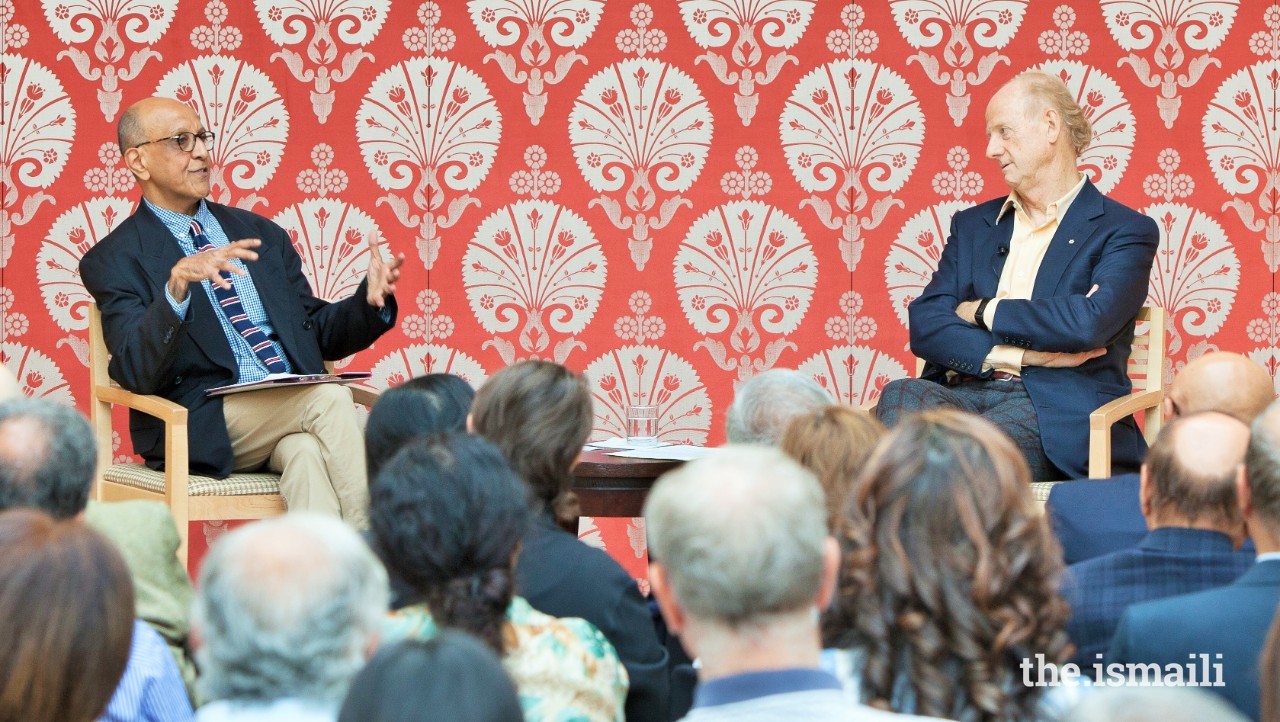 If civil society is about effective citizenship, does that make it a secular matter — so faith-based organisations must also act in the secular domain?

The motivation for civic action is very often faith-driven.  During Ramadan for example, Muslims go out of their way to support poor and marginalised members of society.  In line with our ethical tradition, Ismailis volunteer at every level for all kinds of causes, including via initiatives such as Ismaili CIVIC.  Sikhs are famous for their temple feasts open to all as part of their ethos; and the Salvation Army's remarkable work for the homeless is driven by a Christian conscience.  So faith is certainly a vital part of the picture.  But yes, ‘civil society’ is understood as a willingness to contribute to the public good, beyond one’s private circle.  The more a faith community engages with the wider public, secular and religious, the richer the role of faith as fostering a ‘social conscience,’ as AKDN illustrates.  And your conscience connects to spirituality, which is easily forgotten when everything is strictly worldly.  If we integrate and balance din and duniya, instead of separating them, then civil society benefits too.

How is civil society changing in the 21st century?  Do new technologies give us fresh ways of connecting effectively for the public good?

“Virtual civil society” is a major outcome of new information technologies, notably via Facebook and other social media channels.  It's about coming together in cyberspace on a whole range of issues, and across local and national boundaries, to push for change.  As a tool for mobilising civil society — and including people and places beyond the barriers of gender, class, and ethnicity — this is obviously welcome.  Take AKF’s annual World Partnership Walk, which now mobilises heavily on digital platforms to reach young and old; the only thing you can't do online (yet!) is walk.

But there are two big concerns with virtual civil society.  First, how much does online activism translate to action on the ground?  Too often, it is easy to click on a Facebook or Twitter link to show your support, and then do nothing.  Sometimes this is because the state or other forces prevent positive action.  Another concern, which we experience with increasing frequency today, is online friction and even hate.  As Mawlana Hazar Imam noted in his Harvard-Jodidi lecture in 2015: “We have more communication, but we also have more confrontation.  Perhaps what we did not see so clearly 60 years ago is the fact that technological advance does not necessarily mean human progress. Sometimes it can mean the reverse.”  This is why civil society bears prime responsibility for embracing a ‘cosmopolitan ethic,’ as an outlook that is not tribal but pluralist.  It turns out that Hazrat Ali's call to see others as either your kin in religion or your kin in humanity is as relevant today as it was in the 7th century.

Amyn B. Sajoo is Scholar-in-Residence at Simon Fraser University’s Centre for Comparative Muslim Studies in Vancouver, Canada. A specialist in international human rights, civil society, and public ethics, Dr Sajoo was educated at King's College London and McGill University, Montreal. He has taught at the University of British Columbia, McGill, Simon Fraser University and The Institute of Ismaili Studies (IIS), and was a Visiting Fellow at Cambridge University in 2005. He led a comparative civil society seminar project at the IIS, and was editor of the ensuing volume, Civil Society in the Muslim World: Contemporary Perspectives (2002). As the chief editor of the IIS’ Muslim Heritage Series, Dr Sajoo launched A Companion to the Muslim World in 2009, which was followed by A Companion to Muslim Ethics (2010), A Companion to Muslim Cultures (2011), The Shi’a World (2015), and The Shari’a (2018). His work on plural modernities resulted in the edited volume Muslim Modernities: Expressions of the Civil Imagination in 2008. Dr Sajoo is the author of Muslim Ethics: Emerging Vistas (2004), and has contributed extensively to scholarly journals and anthologies, as well as to news media on both sides of the Atlantic - including the Guardian, the Globe & Mail, the Times Higher Education Supplement, and the Canadian Broadcasting Corporation.

Reflecting on our times by writing about the world