Skip to main content
The.ismaili > Global > Cultural connections: How Ismailis in the United States are influencing music
Previous Pause Next 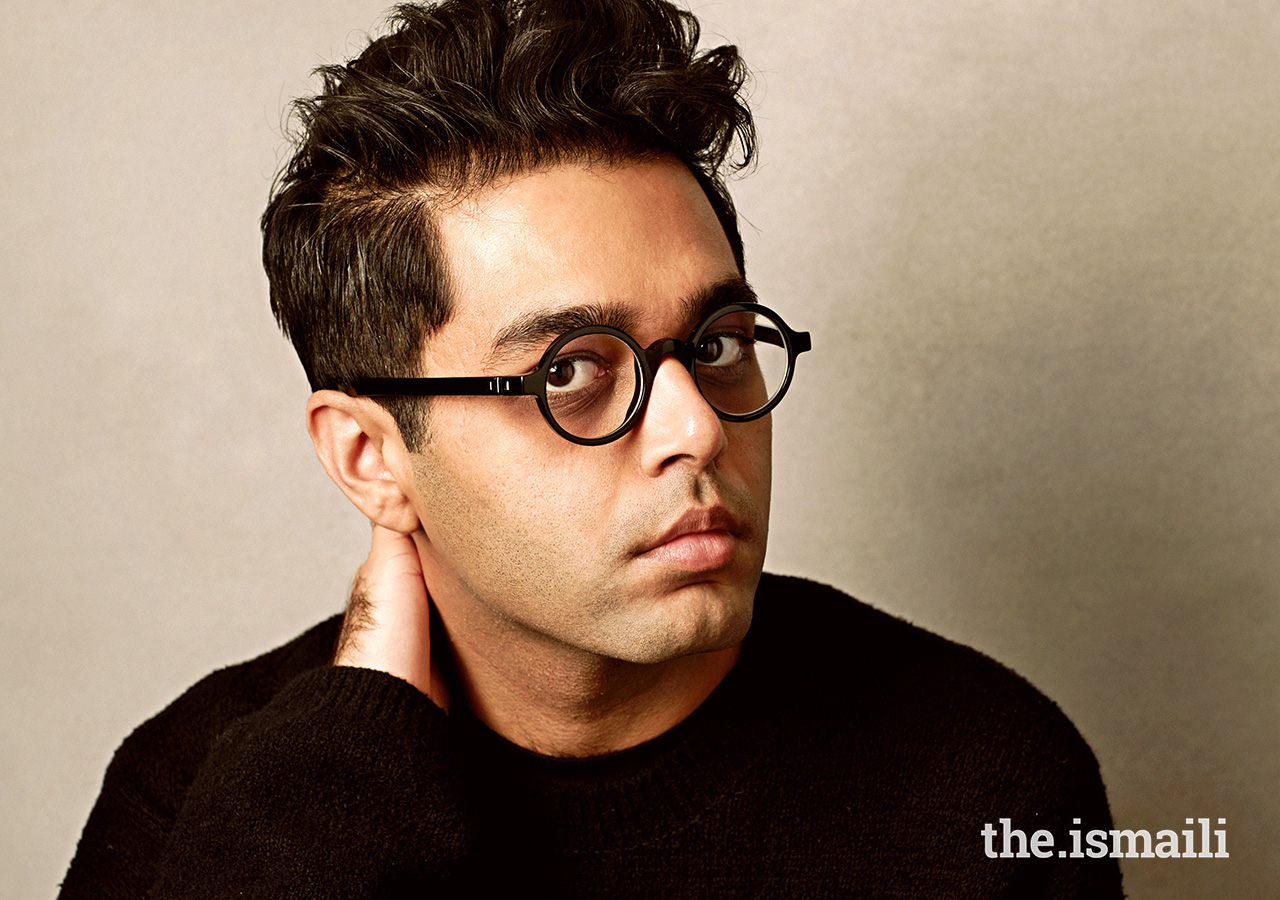 Improvising with a fusion of cultural influences

Rafiq Bhatia’s first memory of music is falling asleep to his grandmother singing ginans. As he grew up, Bollywood music exposed him to the sound of his heritage, stemming from India and East Africa. It didn’t hurt that music was also a genetic component — his maternal grandfather was a violinist, and his maternal aunts were vocalists. With a supportive family, music may have come as a natural choice for him, but he wanted to break the mould, and produce something unique.

Rafiq did just that. The New York Times described him as “a guitarist who refuses to be pinned to one genre, culture or instrument.” Merging traditional Indian and East African influences with jazz, rock and electronic sounds, he has earned his recognition as, “one of the most intriguing figures in music today.”

But the journey wasn’t seamless. Recognizing that a career in music can be a gamble, Rafiq equipped himself with degrees in economics and neuroscience from New York University and Oberlin College. The latter is where he was “discovered” by legendary jazz drummer Billy Hart, leading to collaborations with jazz pianists and composers Vijay Iyer and David Virelles, and drummer Marcus Gilmore.

What continues to set Rafiq apart though, is his resistance to be described as a certain “type” of musician. His three albums, Strata, Yes It Will, and Broken English (released in 2018), show a story of evolution — one that  follows not a linear path, but rather, a cultural one.

Now, playing as a trio and performing in over 300 shows around the world, they have attracted a global following. Their music was described by the Wall Street Journal as "thrilling... an ideal synthesis of contemporary forms," while National Public Radio described them as “the world's most lethal band.”

Rafiq has also worked with Ismaili musicians in the past, and was particularly excited about the renewed focus on music during the Diamond Jubilee.

Learn more about Rafiq at https://rafiqbhatia.com. 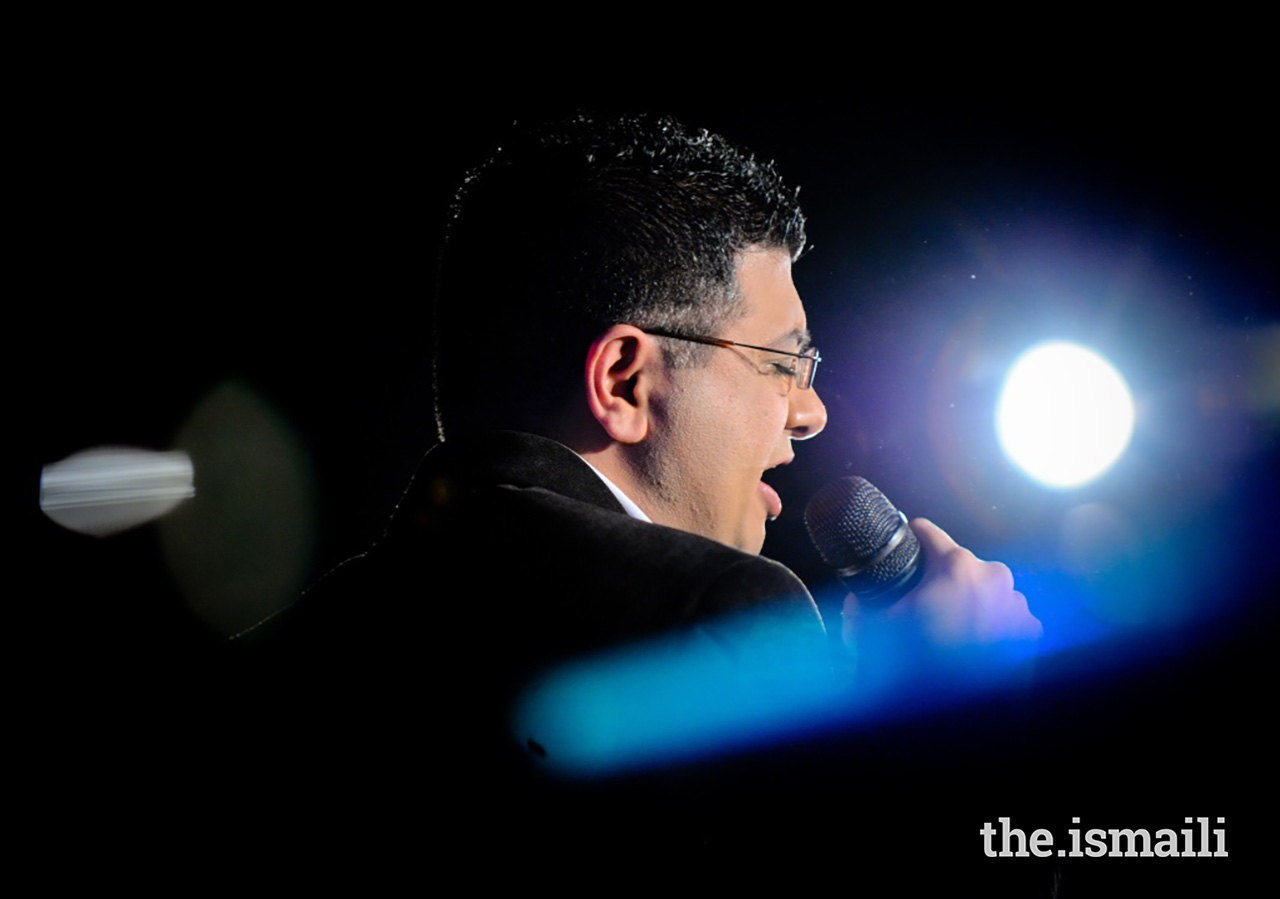 Fez Meghani was a “late bloomer” in his musical journey, and only started singing at the age of 12. He was deterred in his path by an orchestra teacher who told him to pursue other passions, since he wasn’t “good at music.” That was Fez’s trigger for pushing himself even harder. Within weeks, he was playing music by ear, and by 17, he was penning his own songs. As a new immigrant to the US, Fez used music as a way to express his loneliness, and find connections to a new culture. But by the time he reached his 20s and matured as a musician, Fez discovered his true calling: devotional music and poetry.

Poetry turned to songs, which turned into albums, which turned into concerts, and global tours. Along the way, Fez formed what would become one of the most popular Ismaili bands around the world — The Sufistics — comprised of long-time musical collaborators Aftab Ali, Pervaiz Mirza, and Imran Boodhwani.

“My dad was my biggest motivation, and my mom, my biggest proponent. As I started performing, audiences became my drive," said Fez. He added: "People latch on to the expressive nature of the Sufistics' lyrics, and are moved by them. And that inspires me to continue creating new music.”

Over the course of the last 22 years, Fez has produced seven albums, comprising over 100 songs on spirituality, love, expressions of faith, and search for the Divine. Together, the Sufistics have performed around the country and the world, with audiences of over 30,000 people, including at the Special Olympics held in Los Angeles in 2015. They are best known for their Golden and Diamond Jubilee albums, A Golden Sunrise, and Diamonds In the Sky, respectively. They also performed in Malaysia for  Her Majesty the Queen.

Said Fez, “What motivates me the most is the way young members of our Jamat articulate their feelings to me. As someone who is not so young anymore, this is one of the best ways for me to continue writing content that is inspiring, and that can connect with the youth.”

Fez travels around the nation speaking at conferences, conducting workshops, and facilitating sessions on the role, diversity, and impact of music in Islam. 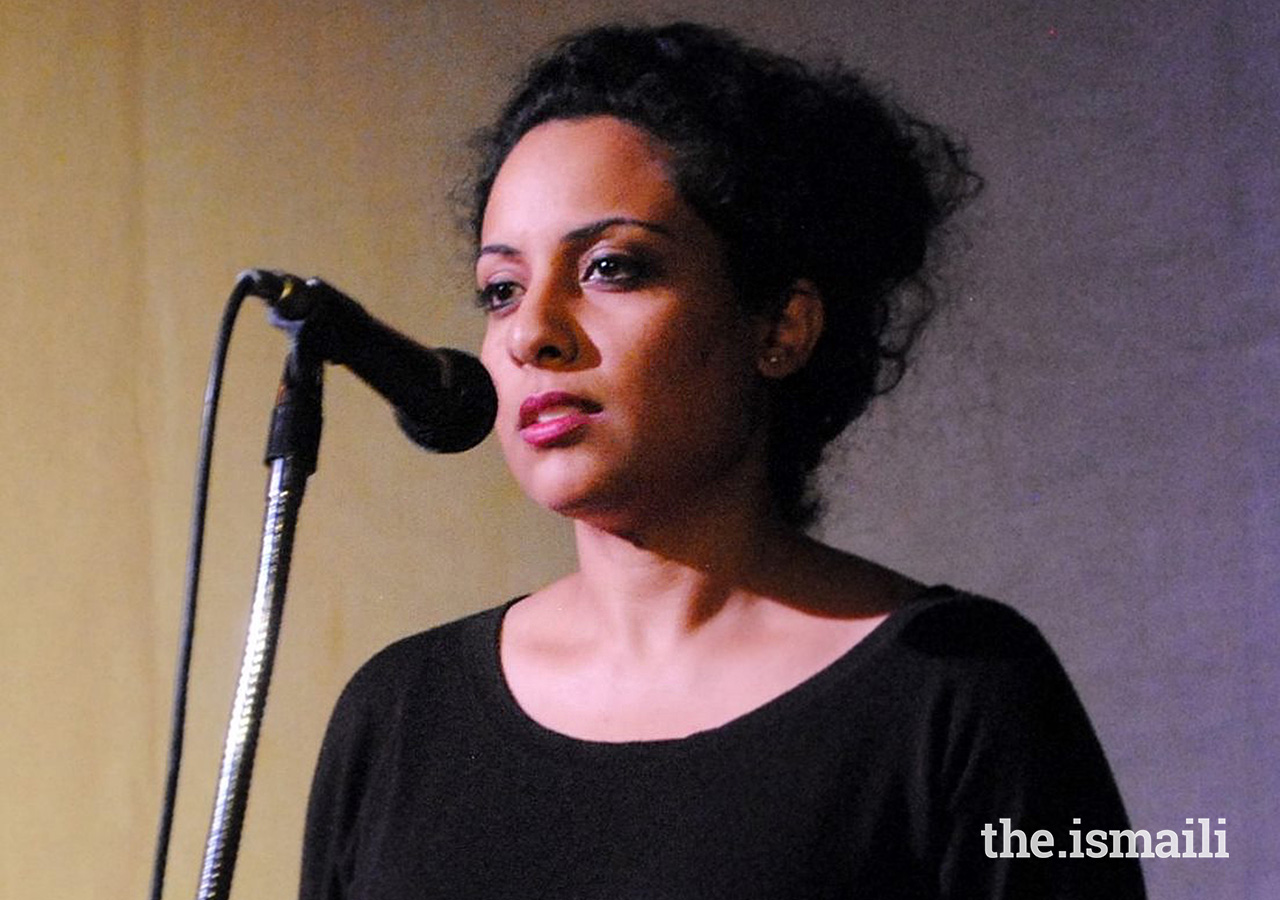 Samira Noorali was only five when she realised her passion for singing was more than a hobby. By eight, she was in a choir, and began private lessons focused on classical music. By age 15, she had private lessons in opera, and her classical Indian musical training continued.

Although she obtained a degree in law, it was music that was her true calling.

“I am glad for that period of my life, when I was a lawyer. I learned and grew from it, but came back to what I feel I'm made for,” Samira said. That experience also taught her that careers can be fluid. “A career is not an open and shut case,” said Samira. “You just do what you like best, and what allows you to serve best.  And, it's alright to do multiple things at once.”

In 2010, Samira became the executive director of the Ismaili Artists Development Program, based in Houston, that aims to raise awareness about the arts within the Ismaili community. She served as music director for a 12-15 piece ensemble which performed newly composed material, as well as their own arrangements of popular songs and traditional material.

Samira was honored to be a part of the ensemble that performed during the procession at Aiglemont, during Mawlana Hazar Imam's Diamond Jubilee Homage Ceremony on 11 July 2017. That opportunity opened other doors for her. She went on to co-write and co-compose “With Heart With Love,” an official song for the Diamond Jubilee.

As part of the US Diamond Jubilee's arts and culture initiative, Samira was the playwright, musical director, and primary composer for Stories: Our American Journey, a theatrical production that toured the US in 2018 to great acclaim from the Jamat. She has also recorded with Salim-Sulaiman, and served as part of their backup choir during a concert in Toronto.

For Samira, the opportunities seem to be connected and constantly evolving. From her participation in Stories, Samira met a fellow Ismaili artist, Farah Alwani, with whom she is creating and releasing a debut musical album through her company Sitare Production. She is also now delving into writing. She has written screenplays and fiction, and has published an illustrated poetry book, A Simple Rebirth, that explores grief, recovery, and what it means to be a woman in our evolving world. 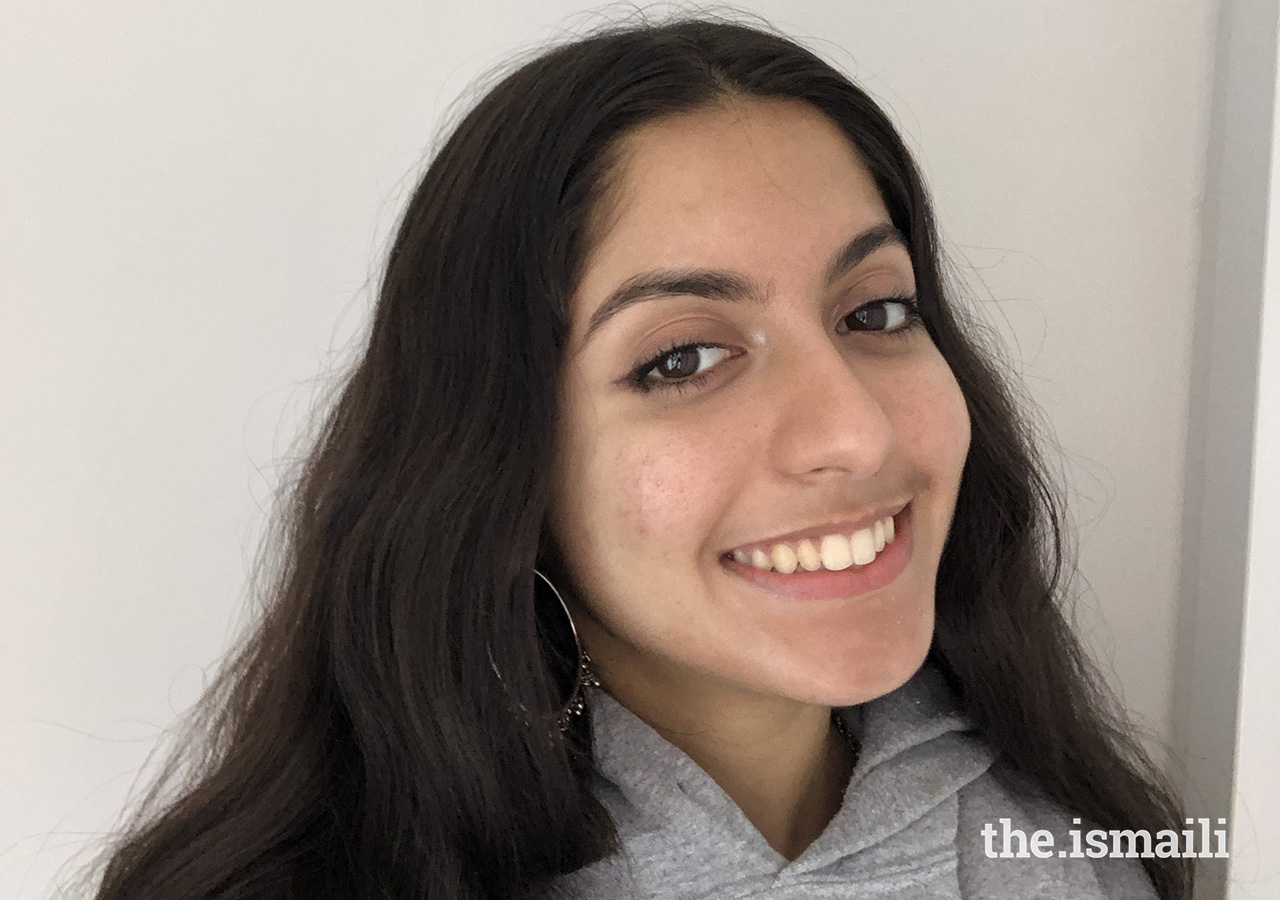 Carnegie Hall debut for a teen

Rida Ali’s music journey is only just beginning. The 15-year-old high school sophomore had a varied start with music.

“I sang Mamma Mia by Abba in front of parents and children for my kindergarten talent show. Having a solo in front of that many people terrified me, and I had no interest in being in any music program.”

It wasn’t until fifth grade that Rida returned to music and joined the Young People’s Chorus (YPC) of New York City.

“I resisted a lot at first, and hated it my first year,” she said, but added, “As the second year came, I became more interested in the music we sang, especially since a lot of the sounds were in different languages, such as Spanish, French, and even Czech.”

Rida was hooked and fully committed to what would be an arduous schedule: non-stop rehearsals and concerts, and balancing school and homework. But with hard work, also comes fantastic rewards. YPC has performed on Broadway, the Lincoln Center, and Carnegie Hall, among other venerated locations in New York City.

“The first time I performed at Carnegie Hall, I was taken aback by how many seats and balconies there were. I had only performed at a small concert hall in YMCA before,” Rida recalled. As hundreds of people started to pile in and the noise of chatter grew, she began to understand the volume of her performance. It was also the moment she knew she “would never quit no matter how hard it got.”

It is too early for Rida to decide if there’s a career in music ahead for her. The one thing she is certain of is the need for balance between academia and creativity.

“Make sure you prioritize school work, but still balance it with the arts, whether it be music, or anything else,” Rida advised. For now, she continues to prepare for her next concert.

Crisis as a catalyst: Unlocking opportunities in teaching and education