Fête de la Musique, also known as World Music Day, is celebrated on 21 June every year. On this day, musicians around the world are urged to play and listen to music outdoors in their neighbourhoods, or in gardens, parks, and public spaces. In the lead-up to the occasion earlier this month, thousands of people gathered to celebrate Eid ul-Fitr at the London Eid Festival 2019 in Trafalgar Square, where they were treated to a special performance by the UK Jamat’s Ismaili Community Ensemble.

World Music Day provides an ideal opportunity to reflect on the power of music to transcend social, cultural, and linguistic barriers, and to provide a medium of communication that speaks directly to each individual.

At the Aga Khan Music Awards Prize giving ceremony in Lisbon earlier this year, Mawlana Hazar Imam said, “The cultural heritage of Islam has long embraced musical language as an elemental expression of human spirituality. Listening to music, practising music, sharing music, performing music — have long been an intimate part of life for Muslim communities across the world.”

Speaking of the remarkable diversity existing within the world of music from Muslim civilisations, Hazar Imam continued, “It comes in many styles, forms and classical repertoires. It includes simple folk melodies, contemplative mystical music and driving dance rhythms; and it reflects the immense diversity of different Muslim cultures themselves, including musical traditions that have been carefully cultivated over the centuries within the Ismaili community.”

Following in this rich tradition, the Ismaili Community Ensemble (ICE) was founded in 2007, as a Golden Jubilee initiative aiming to nurture musical talent within the Jamat. ICE operates on the premise that music can be a powerful method of communication, reflection, and education.

ICE’s latest performance was a beautiful and unforgettable sight to behold, as tens of thousands of people from across a number of communities and cultures come together to celebrate the end of Ramadan at the London Eid Festival in the city’s iconic Trafalgar Square on Saturday 8 June 2019.

The London Eid Festival is a free, annual event sponsored by the Mayor of London, and is attended by Muslims and Non-Muslims in a showcase and celebration of London’s diverse communities and cultures. A key message of the day was encompassed by the hashtag #LondonIsOpen, reflecting the city’s acceptance of people from different countries and backgrounds.

On the day of the event, Trafalgar Square is transformed into a spectacular, colourful festival as attendees feast on food from around the world, and are entertained by an eclectic mix of live music, dance, and spoken word poetry.

Part of the line-up on the main stage was our very own Ismaili Community Ensemble who performed a 20-minute set. Five of their original compositions were performed, and received an overwhelming response from an exuberant crowd.

Omar Ali, guitarist in ICE and a member since its inception in 2007 said, “I am grateful to have had the opportunity to participate in such a positive and collaborative community project. It is all the more special for me to get to play in ICE since the early years of this project were so important in my development as a guitarist and musician. I thoroughly enjoyed being part of this musical celebration of Eid on such a prominent stage.”

ICE composes all of its music from scratch, and its artists learn by ear, with everyone contributing to the creative process. Musicians write lyrics inspired by their personal journeys as young Ismailis, and seek inspiration from the literature and music of our inherited traditions, including ginans and qasidas from South and Central Asia, and also from the works of Persian poet Jalal al-din Rumi.

Zayn Meghji, who plays Saxophone said, “Playing music from our traditions in Trafalgar Square - a space in which British History has been playing out for hundreds of years - I felt privileged that I was able to share our story, and have it heard.”

Sharing the stage with ICE at the London Eid Festival were a West African band, an Indonesian dance group, and Syrian classical musicians. ICE’s music stood out as reflecting the voice of our diverse community, fusing Western Classical sounds with Jazz, Indian, and Arabic influences, as well as Soul, RnB, and Funk. Saxophones, vocals, flutes, violins, guitars, and keyboards played alongside the sitar, bansuri, and rubab, supported by an eclectic percussion section comprising of a drum kit with cajon and darbuka.

ICE have had an exciting recent few years, with an array of performances and the recording of a number of songs in a professional recording studio. Plans for the future include a music camp where artists come together for an intensive week of music making culminating in a concert. ICE will begin a new cycle of music creation with more concerts planned in the latter part of 2019. 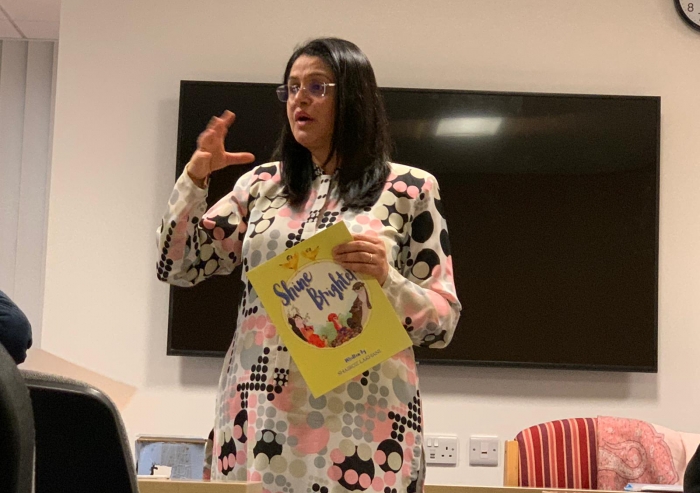