The Chautauqua Institution is dedicated to learning about the best of human values by exploring the religious, social and political issues of our times. Chris Breitenbach (Flikr/chrisbreitenbach)

Sometime in the mid-1990s, the Chautauqua Institution, located in New York State, realised that it was not, as it had claimed, a fully Abrahamic community. It had been founded as a Christian institution in 1874, and had accumulated a strong Jewish presence, but the absence of the Muslim community on Chautauqua's campus was conspicuous.

“We couldn't call ourselves an Abrahamic community,” says Maureen Rovegno, assistant director in the Department of Religion, “until we had Christian worship, Jewish worship and Muslim worship.”

At the same time, the Ismaili Muslim community could see the need for greater awareness about Islam and Muslim cultures in the wider society. “After the Gulf War, there was a general sense among the intelligentsia that there was a certain ignorance about Muslim societies,” says Professor Azim Nanji, senior associate director of the Abbasi Program in Islamic Studies at Stanford University and former director of The Institute of Ismaili Studies in London.

When Dr Ross McKenzie, Chautauqua's historian and former director of its Department of Religion, proposed that Professor Nanji give a series of lectures at Chautauqua about Islam, it was the start of a new era. Nanji, who recognised the potential in such an offer, reached out to other Muslim scholars, who welcomed the opportunity to gather at the institution for a common purpose and participate in open dialogue regarding their faith.

“We finally got the third voice in our Abrahamic community,” says Reverend Joan Brown Campbell, Director of Religion. “The Ismaili community, in particular, was a necessary cornerstone in developing those early relationships.” Thus began a relationship that led to many meaningful exchanges between the various faith-based entities associated with the institution. 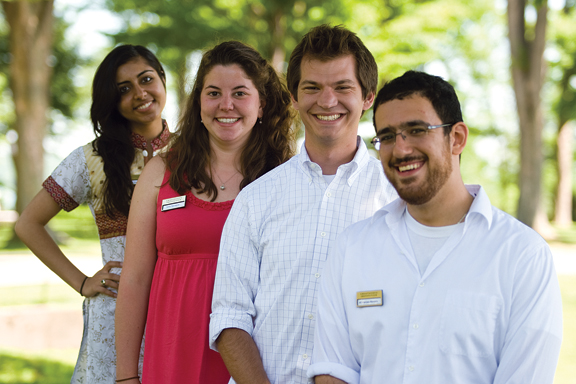 Nur Kara and fellow APYA programme coordinators pose for a photograph in the The Chautauquan Daily newspaper. Courtesy of Nur Kara

The Chautauqua Institution is a not-for-profit educational centre that attracts nearly 150,000 individuals each year. According to its website, Chautauqua “is dedicated to the exploration of the best in human values and the enrichment of life through a programme that explores the important religious, social and political issues of our times.” As an incredibly established organisation, Chautauqua attracts speakers like US Secretary of State Hillary Clinton and well-known author Karen Armstrong. Over the years, they have been joined by renowned Muslim scholars and speakers.

During its nine-week residential summer program, stimulating and engaging lectures are conducted along with courses and activities in the areas of art, music, dance, theatre, writing, and other specialty interests. In August 2010, as part of the summer programme's Abrahamic Week, Nanji returned to Chautauqua to address the concept of sacred spaces in each Abrahamic tradition, in a lecture titled Sacred Spaces, Shared Visions. An evening of entertainment, sponsored by the Ismaili Council for the USA, featured Hebrew, Spanish and Arabic music.

“It's like an intellectual oasis, and the people that are there can take messages back to their communities,” says Professor Nanji of the Chautauqua Institution. “You never know who will be in the audience at Chautauqua.”

While the institution provides the Muslim community with a platform that is unique for its lasting impact and thought leadership, Muslims who engage with Chautauqua reciprocate by sharing an understanding of Islam that is hard to find in mainstream media.

“In every case, we have found people who are intelligent, passionate about this work, and share a commitment to economic and social justice with us that is unparalleled,” says Tom Becker, president of Chautauqua.

This mutual respect has led to bigger and bolder initiatives.

The summer of 2006 saw the first Abrahamic Program for Young Adults (APYA), a programme designed to teach how the followers of the three Abrahamic faiths can live together in mutual appreciation and peace. According to Rovegno, the current director of the programme, the idea for APYA was conceived at a conference at the Ismaili Centre, London, and was “inspired by Eboo Patel's words on educating youth about interfaith work.”

Patel, the founder of Interfaith Conversations, was invited to speak at the Chautauqua Institution in 2008. He stresses that if religion is going to be a bridge of cooperation, it is imperative to have a generation of bridge builders.

“A huge part of building bridges between different religions is how we talk about our own religions, other people's religions and the relationships between them,” he said during an interview.

Nur Kara, an Ismaili student at the University of Chicago who participated in the 2011 APYA programme along with her Christian, Jewish and Muslim counterparts, was impressed with it. “We should work more on interfaith dialogue and not shy away from discussions about our belief system and wider arena of Islam,” she says.

Nureen Gulamali, a student of the 2010 APYA programme, is also excited about the potential and reach of the initiative.

"The Chautauqua Institution serves as a hopeful representation of the future,” says Gulamali. “In a single summer, we – faith leaders, scholars, organisers, and participants – managed to touch lives, form bonds, and change the perceptions of thousands of people.”

“Imagine what could be done in a lifetime,” she adds.