In 2010, 38-year-old Naheed Nenshi made history when he became the first Muslim mayor of the City of Calgary in Canada. In a recent interview, Mayor Nenshi shared his thoughts on pluralism in civil society, community-building and his vision for women, young people, and the Ismaili community. 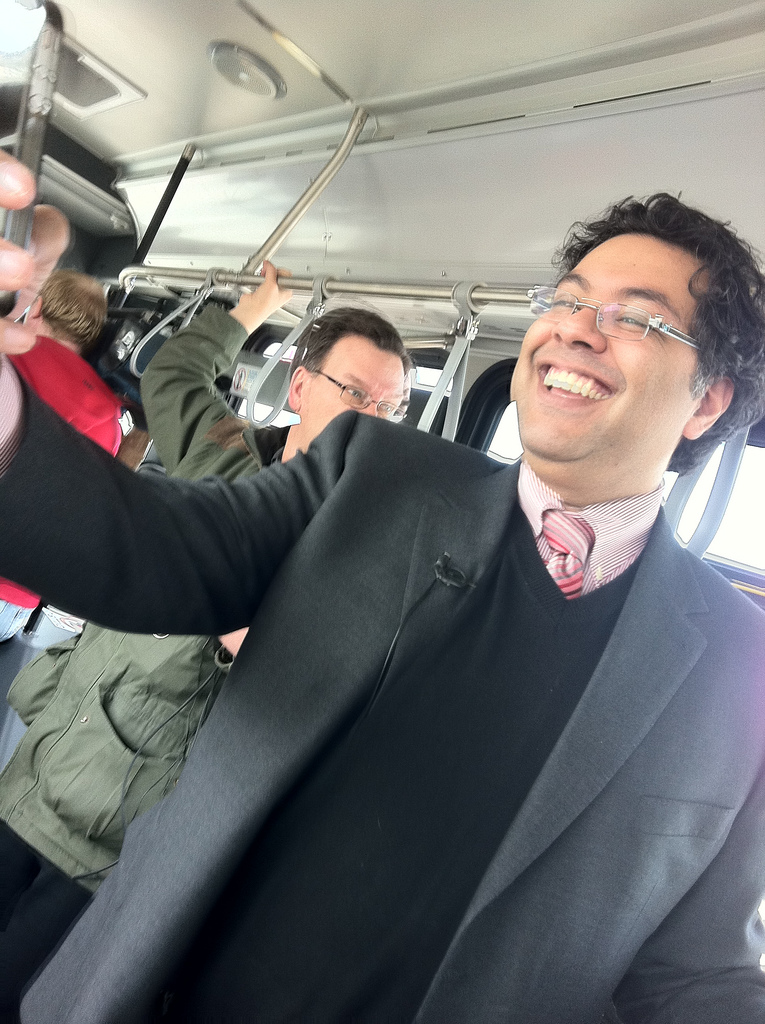 October 2010 ushered in a new era for Calgarians when 38-year-old Naheed Nenshi was elected the first Muslim mayor of their city. Nenshi, who is also an astute entrepreneur and a community leader, ran a strong campaign that was led by a broad and energetic demographic that included significant youth support. The campaign was noted for its utilisation of social media tools to engage citizens and create grassroots momentum.

Mayor Nenshi grew up in Calgary and received his Bachelor of Commerce from the University of Calgary before going on to complete a Masters in Public Policy at Harvard University's John F. Kennedy School of Government. He is the lead author of Building Up: Making Canada's Cities Engines of Growth and Magnets of Development.

After spending many years working for McKinsey & Company, Nenshi formed his own consulting firm called the Ascend Group, that helps public, private, and non-profit organisations grow. In that capacity, he also designed a major policy for the Government of Alberta and worked with the United Nations to determine how global business can help the poorest people on the planet.

Aaida Rajabali recently spoke with Mayor Nenshi on behalf of TheIsmaili.org to learn about his first few months in the office. The mayor discussed his views on pluralism in civil society, community-building, and his vision for women, youth and the Ismaili community.

Aaida Rajabali (TheIsmaili): The last few months have been quite exciting for you. Can you recall a particular challenge, situation, moment, or achievement that stands out in your mind?

There have been others, for example, the night where sometime after midnight, we were finally able to pass a tentative approval for building of a really important piece of infrastructure here in Calgary – the airport trail underpass – which had been languishing for years and years, but our council was able to move it forward in a matter of weeks.

TheIsmaili: Your first anecdote ties into the role of faith and politics. To what extent did the values and ethics of your religion and culture propel you to seek the Mayorship?

Mayor: That's a very good question. The fact that I have been raised within the Ismaili community, and really within the ethic of the community, to do service to the community and give whatever you have – even if it's not much – has always been a part of my DNA. Certainly that ethic of improving communities in which we live played a huge role in my decision to go into politics.

TheIsmaili: You may notice that secularism is an increasingly vocal force in society. What are the implications for persons of faith who choose to enter politics? Is there still a role for faith-based values in public service? 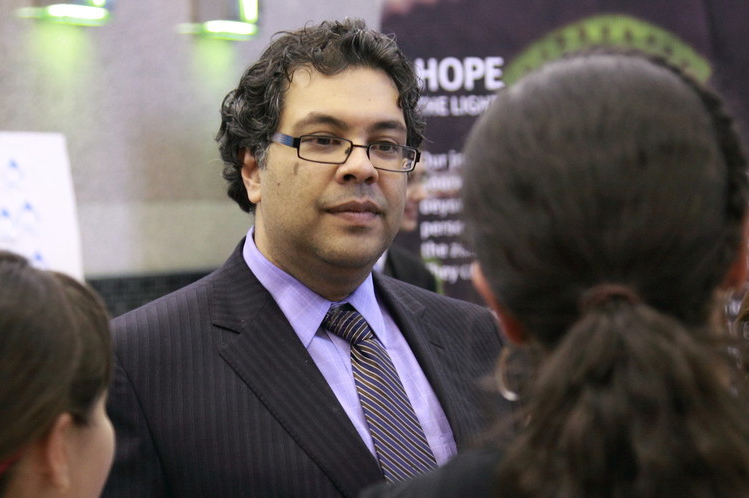 Mayor Nenshi speaks with students at the 22 March World Water Day celebration hosted by the Calgary-based Centre for Affordable Water and Sanitation Technology. Courtesy of Mayor Nenshi and Team

Mayor: One of the things that I spend a lot of my time doing is speaking with people of faith. There was one week in December where I presided over Eid at City Hall celebrations, lit the community menorah for Hanukkah and turned on the Christmas lights. The message was so clear because I say to people of faith: look, when you think about our common values, such as the importance of human dignity – which requires you to look after those who are less fortunate – we are absolutely united.

I have found so much support for what I'm doing from diverse communities. One of the things that I have in my office is a personalised yarmulke – a Jewish skullcap – which the Orthodox Jewish community made for me. It's in purple, which is my signature colour, with my name embroidered on it in gold. One might not have expected that the Orthodox Jewish community would be so welcoming to a Muslim political official as they have been [to me].

TheIsmaili: Civil society and pluralism are important factors for a healthy democracy. What do you think the role of pluralism is – specifically in civil society rather than in politics?

Mayor: It's absolutely essential. Hazar Imam has often spoken about the success of pluralism in Canada. I think that we have to both celebrate the fact that pluralism has been so successful in this country, and at the same time ensure that the community can change to understand the strength of it.

I come from civil society. One of the things that we absolutely know about community-building is that diverse communities – not just in ethnicity, but in age, income-level and socio-economic background – are stronger communities. These are communities that work better. They are resilient. They are much more able to roll with the punches.

Children who grow up in these communities are better equipped to succeed in life because they have been exposed to the differences that exist, early in life. We know that this is important, but we also know that we have to make decisions to foster that pluralism. We have to tend to it. We have to make sure that we are embracing it and helping it become more successful, in order for it work. There is absolutely a role for the public sector to do that, but it really is about strengthening pluralism in civil society.

TheIsmaili: One part of pluralism that is really important is gender-balance. How do you think more women can be encouraged to engage in civic activities?

Mayor: It has long been an issue of mine that we need to have more women engaged in public life. I think it's a shame that on my 15-member city council, there are only three women.

We call them “alderman”, by the way. A very small symbolic change that our council made very early on is that we changed that title so that after the next election, they will be known as “councillors”, rather than “alderman”. It's a very small thing to move to a gender-neutral term, but it's a symbolic one because we do understand that women are not participating in political life as much as they should.

My political campaign was largely run by female volunteers who were deeply committed to the future of their community. But now what we really have to do is ensure that we're finding space for female voices at the table in public life.

TheIsmaili: You mentioned the volunteers that helped you campaign. How did you foster a holistic experience for volunteers who are engaged in civic activities? 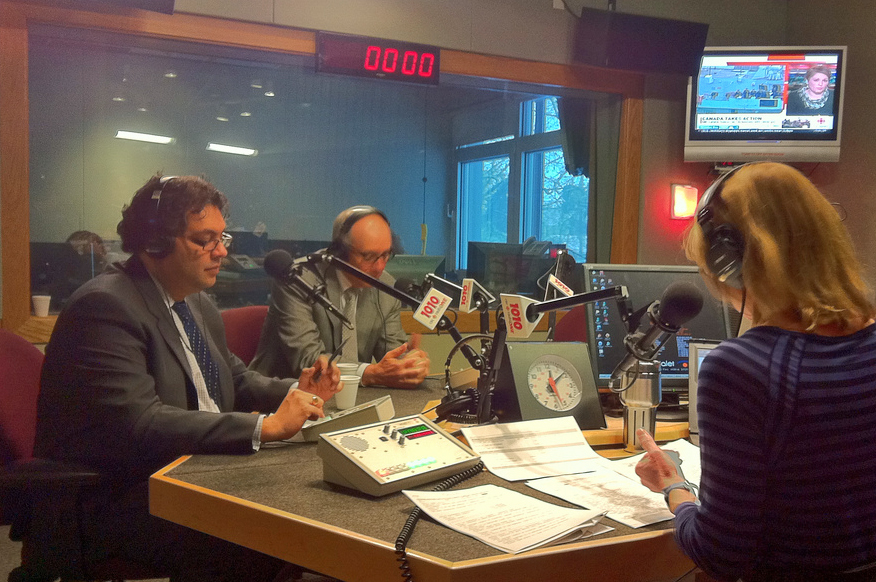 Mayor: One of the best things about the Ismaili community is our incredible focus on volunteerism. But we also have to ensure that we don't focus so much on volunteerism within our community that we run the risk of becoming insular. We need to actually be models for our neighbours and for the rest of society on how well volunteerism can work.

That means that we need to value members of our community who choose to devote a portion of their community service outside our community, to help their neighbours with their lives.

TheIsmaili: At a time when youth engagement in politics is widely considered to be waning, your Mayorship opens a new avenue of possibility for young people from recently immigrated communities to serve society. How important is this to the future of Canadian democracy?

People care passionately about their communities and about their future. The challenge is that a lot of folks don't see that the institutions – whether faith-community, political institutions or their government – are related to the hopes, dreams, and fears for their own communities. That's a form of disempowerment.

What I really tried to do in my own campaign is to help people understand that the institution of government, in particular, exists to help them make those dreams real, to fix that disconnect, to reconnect people with their government. All we did was ask people to participate.

TheIsmaili: For youth who wish to pursue a political career, what kind of educational backgrounds or extracurricular pursuits would be beneficial?

Mayor: I believe that people should engage in the community wherever they feel a real passion. That means that we've got to work within ourselves to achieve those passions.

I say to young people, if you're excited about the arts, call a theatre company and say, “how can I help?” You may find yourself acting as an usher once a week and getting to see a show for free, or you may find yourself sitting on the board of a company. Seek those opportunities that match your passions and if your passion is politics, I tell you, there is not a political candidate or a politician in office who won't find a job for you.

Call them – say, “how can I be helpful?” Volunteer on political campaigns. You learn a lot and you'll meet some great people. It may seem that door-knocking or phone-canvassing is really difficult, but after you knock on that first door, you will find that you are meeting your neighbours and you're engaging the community.

When I was in my first year of university, I volunteered on a federal leadership campaign, just to see what it was like. A guy I met on that campaign used to drive around with me in the middle of the night and deliver flyers under every single hotel door in Calgary. That guy sits down the hall from me now because he's my Chief of Staff.

Mayor: I just want to thank the Ismaili community across the country because I know that the community was incredibly supportive. Those in Calgary and Alberta were able to volunteer and assist financially and that made a huge difference. I know that Ismailis across the country had me in their thoughts and prayers. Ultimately, it was that and their good graces that got me where I am and I just want to thank them for that.