As owners of a Kenyan beach resort, the Visram family maintains a firm belief in improving the lives of the local community. Their efforts to help people understand the real and present dangers of illegal human trafficking earned them a nomination for the first-ever Business Leader's Award to Fight Human Trafficking, for which Mawlana Hazar Imam was a jury member.

For Shahinoor and Mahmud Visram, the fight against human trafficking has been a focus of their lives for the past four decades.

A modern form of slavery, human trafficking is the illegal trade in human beings for nefarious purposes, including forced labour and sexual exploitation. The International Labour Organization and the United Nations estimate that 2.5 million people are in forced labour as a result of being trafficked in 161 different countries. Children and women make up the largest proportion of victims.

As owners of the Sun n Sand Beach Resort in Kenya's Coast Province, the Visram family maintains a firm belief in improving the lives of the local community. They have set up anti-human trafficking educational programmes to help people understand the real and present dangers of illegal human trafficking in their village. The programmes raise awareness of the threat of local traffickers among vulnerable workers, families and especially children. 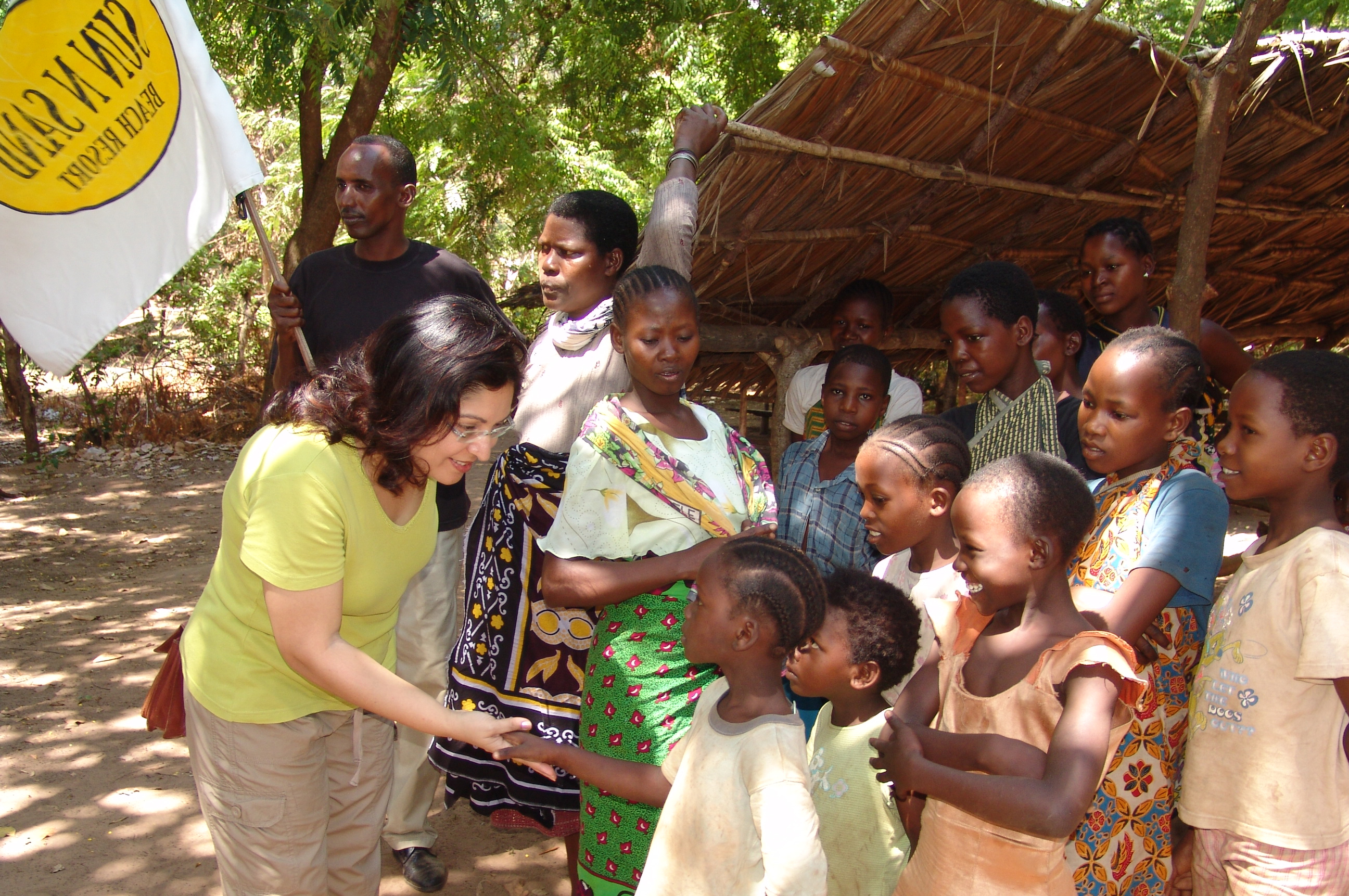 Shahinoor M. Visram, Managing Trustee of the Sun n Sand Trust, greets children in the village of Kikambala, Kenya where the Visram family has made important contributions to combating human trafficking and improving quality of life in the local community. Courtesy of Shahinoor M. Visram

“The main trigger of commercial sexual exploitation of children in tourism is poverty,” explained Shahinoor Visram. “We felt that the strongest tool or solution was education. We wanted to make sure that as many children [as possible] in the village make it to secondary school.” As such, an important focus of the programmes is on teaching students to understand their rights – particularly over their bodies – and to provide them with more options so they avoid pitfalls such as drugs and alcohol which can make them more susceptible to human trafficking rings.

The Visram family's efforts were spotlighted in December 2010 at the Luxor International Forum to Combat Human Trafficking. Part of the “End Human Trafficking Now!” campaign, the Forum brought together the United Nations Global Initiative to Fight Human Trafficking (UN.GIFT), the UN Global Compact and the business community to find solutions that will put an end to human trafficking.

A highlight of the Forum was the first-ever Business Leader's Award to Fight Human Trafficking, in which Shahinoor Visram was among a field of nominees that included representatives of The Body Shop, Microsoft and the Mayo Clinic. Mawlana Hazar Imam was one of the notable persons that sat on the award's seven-member international jury, and Shahinoor had an opportunity to address the gathering. 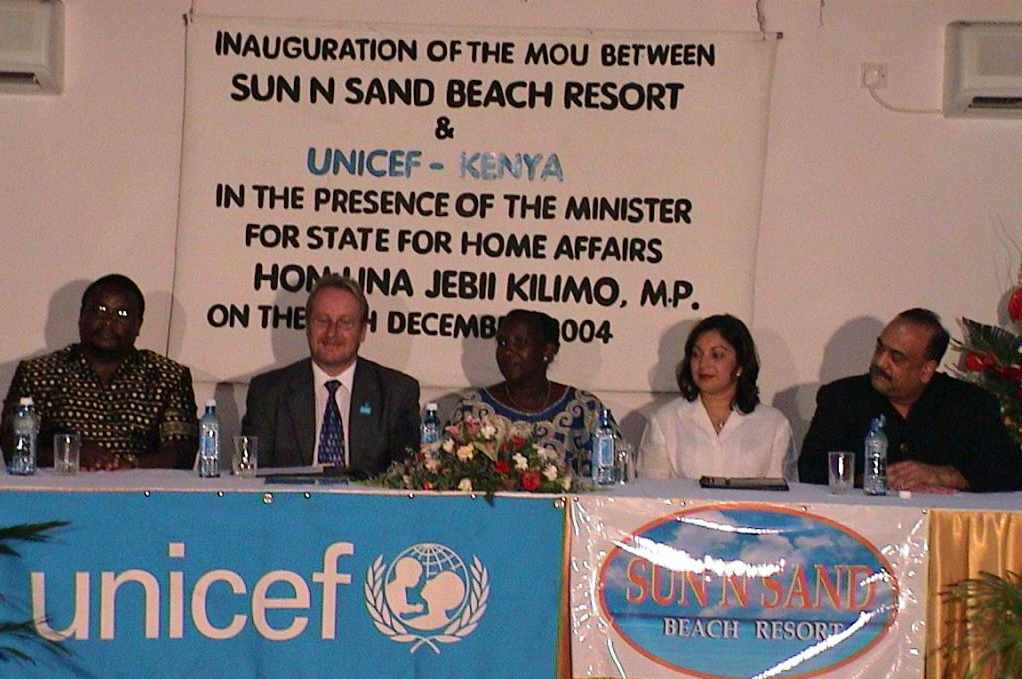 Shahinoor M. Visram and Mahmud Visram participate in the signing of a Memorandum of Understanding for the Protection of Children between the Sun n Sand Beach Resort and UNICEF in December 2004. Courtesy of Shahinoor M. Visram

Shahinoor and Mahmud Visram's plight against human trafficking started in 1971, when Mahmud's parents (Roshan and the Late Amir Visram) purchased the Sun n Sand Beach Resort in the poverty ridden village of Kikambala, Kenya, home to more than 20 000 inhabitants. They understood that human trafficking was a complex and intricate problem that affects all levels of society, and saw education as a means to provide the villagers with a way to defend themselves from trafficking agents who prey on the weak, ill-educated and impoverished. This led to creation of the Sun n Sand Trust, for which Shahinoor is the Managing Trustee.

Through the Trust they have built a nursery school that has benefited more than 800 children, a primary health care centre that has served more than 40 000 patients and a place of worship. They have also provided clean water to the community. In addition, the Trust – whose administration costs are funded by the resort – has partnered with the Government of Kenya and Microsoft to create a full-fledged IT lab at a government primary school in the village.

Sun n Sand was the first organisation in Kenya to sign the Memorandum of Understanding with UNICEF towards the Protection of Children, and was appointed a Member of the Steering Committee of the Code of Conduct against Sexual Exploitation of Children in Travel and Tourism. It is now a Director of the Board, represented by Shahinoor Visram, who has also served as a member of Kenya's National Council for Children's Services and Kenya's Street Families' Rehabilitation Trust. 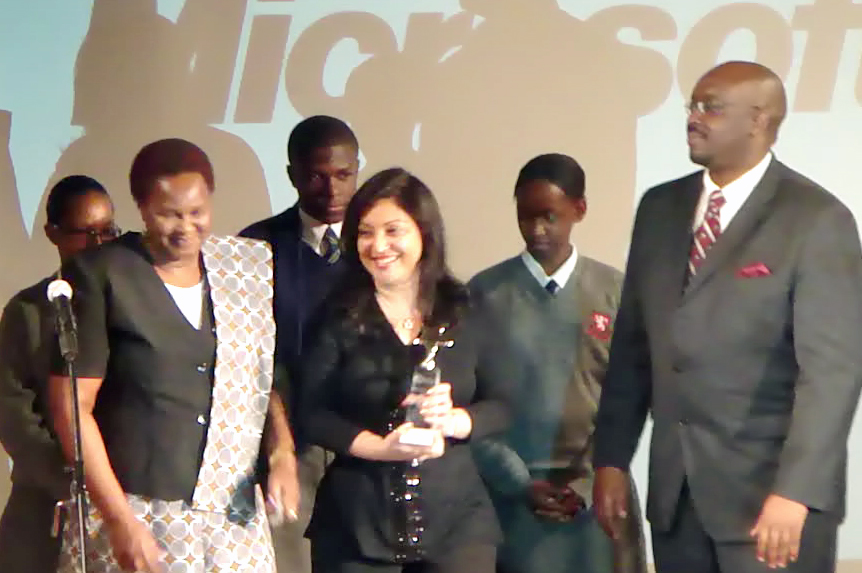 The Trust and its initiatives are far reaching, impacting numerous local groups who could potentially have an impact on the human trafficking trade. Shahinoor and Mahmud's desire to “sensitise the entire community and create awareness” has led to the establishment of regular information seminars held at the Sun n Sand Beach Resort for local bus and taxi drivers, nightclub owners, school-teachers at the school and other community groups who may benefit from education on how to best prevent illegal trafficking in their town. The Visram family sees their endeavour as a joint community effort, and have even included guests of the resort in the seminars, educating them through posters, forbidding any association with the trade and allowing them to directly donate to the Trust's programmes.

Although the Visram family did not win the Business Leader's Award to Fight Human Trafficking, they felt humbled that their efforts were heralded amongst such impressive and internationally-known nominees, and are even more driven in their personal contribution to the world's fight against human trafficking.

Lexis Nexis – created a national database of social services, in collaboration with the American Bar Association and created a Code of Conduct for its own supply chain