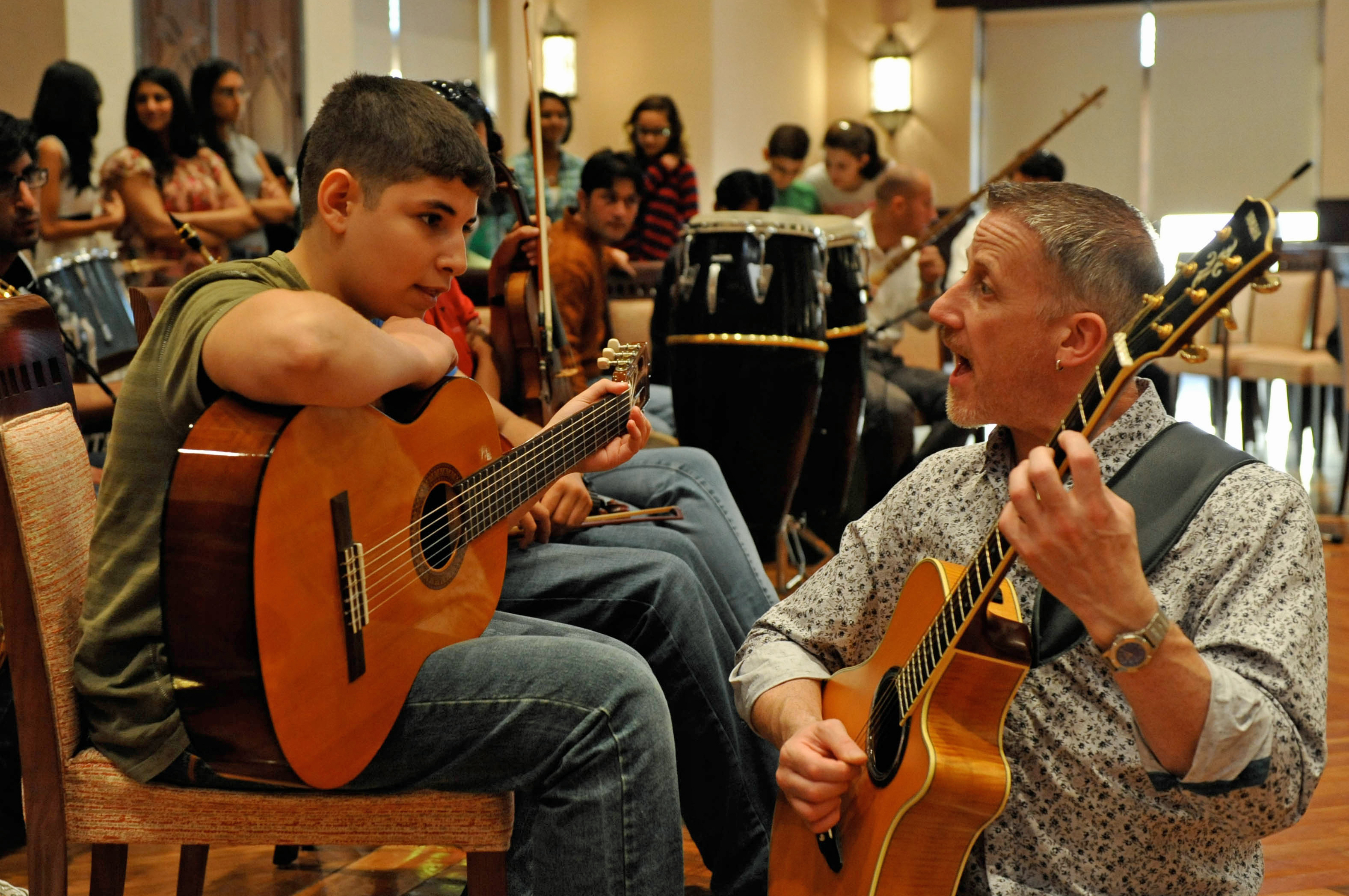 During rehearsal, Paul Griffiths works with a Syrian musician from the UAE Jamat. Naveed Osman

As one of 22 musicians in the UK-based Ismaili Community Ensemble (ICE), I took part in a weekend journey to Dubai at the end of September. The trip was an international first for the group, and we were fortunate to be accompanied by Paul Griffiths and Ruth Currie from the Royal Philharmonic Orchestra.

We travelled to the United Arab Emirates to perform together with members of the UAE Jamat at a fundraiser that Focus Humanitarian Assistance organised that weekend in Dubai. In addition, the Ismaili Council for the UAE had invited us to give a performance before the Dubai Jamat. ICE was also involved in a further collaboration between the Children's Hope Foundation and the Zamana Foundation, to conduct a workshop at the Rashid Centre for Paediatric Therapy.

Soon after arriving in the city early in the morning, we proceeded to the Ismaili Centre, Dubai, whose calm and coolness contrasted with the heat and bustle of the city. Beautiful stone archways coupled with rich woodwork, provided an inspiring setting for the full day of rehearsal that lay ahead. 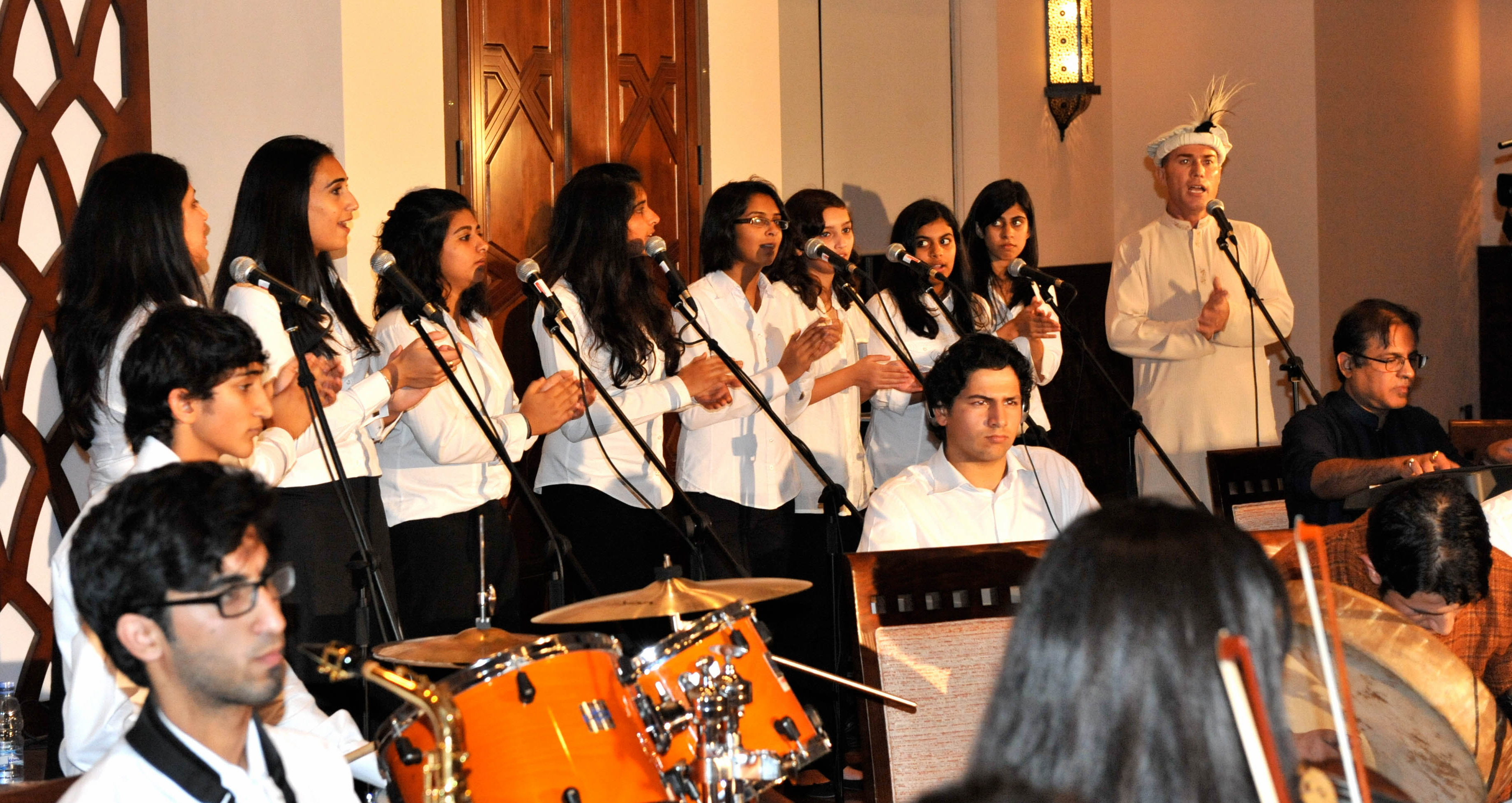 The Ismaili Community Ensemble and members of the UAE Jamat perform together at The Light Within Concert held at the Ismaili Centre, Dubai. Naveed Osman

We had the pleasure of collaborating with members of the local Jamat, including some inspirational musicians from Northern Pakistan and Syria. Paul incorporated their talents seamlessly into the group, nurturing our new friends to their potential.

“It was a great experience,” said Alina Bhatia, a Dubai Jamati member who sang in the Dubai-ICE fusion group. “I got to learn how they created a song using different instruments. It felt good to sing with ICE in my first stage performance.”

Zain Kassam, a Dubai musician who also participated in the fusion group added “I thoroughly enjoyed this experience and the chance to play with such a prestigious ensemble. I have learnt many new things from them and hope they come back again.” 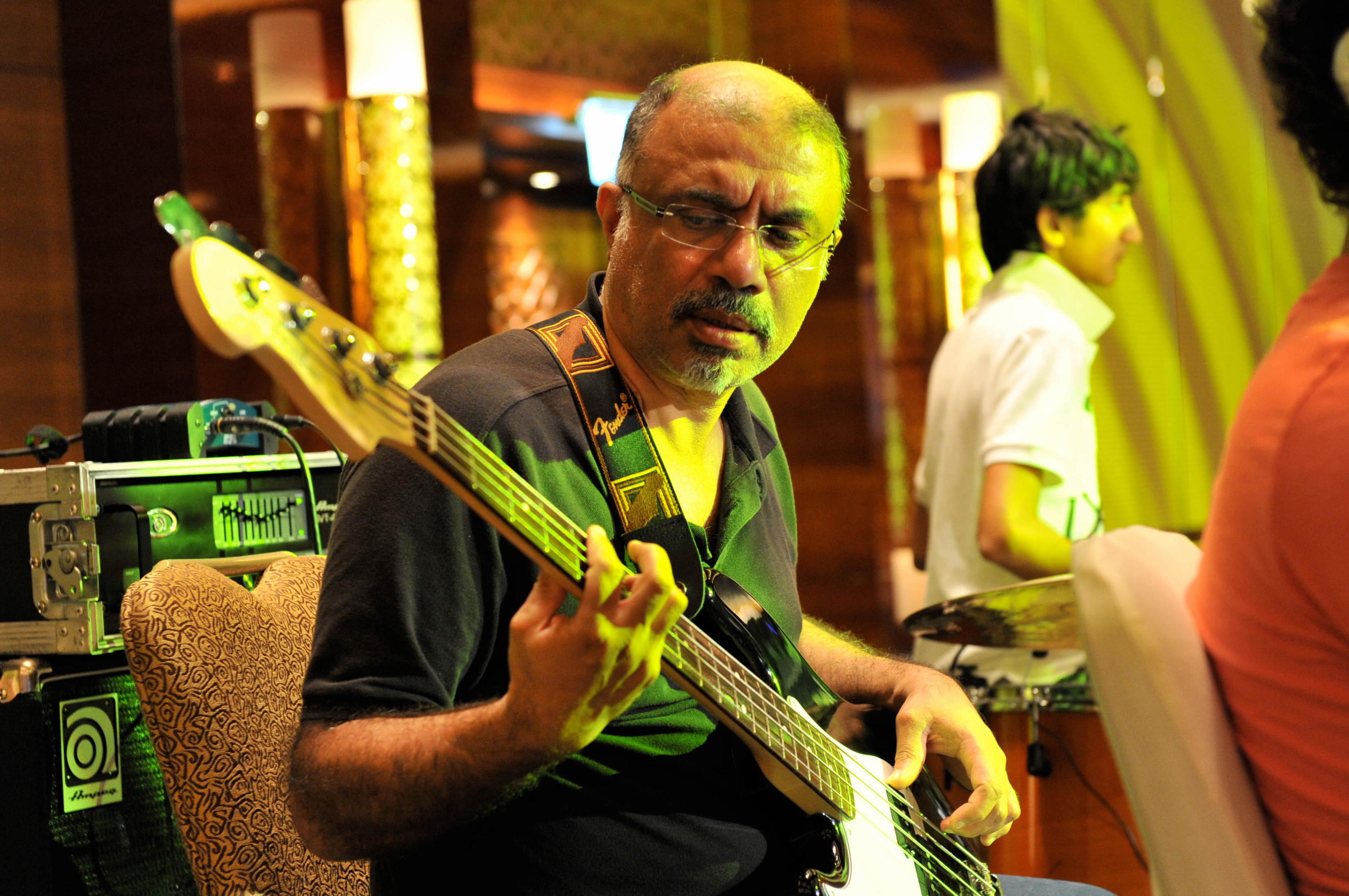 Rehearsing and checking sound levels ahead of the FOCUS gala dinner performance in Dubai. Naveed Osman

Our first stomach-twisting event came with the evening performance before the Dubai Jamat. After the first song, we were so taken aback by the overwhelming response of the audience that we did not know whether to laugh or cry!

“The name ICE is quite deceiving,” commented Naushad Rashid, President of the Ismaili Council for the UAE, following our performance, “because all I can say is you guys are HOT!” 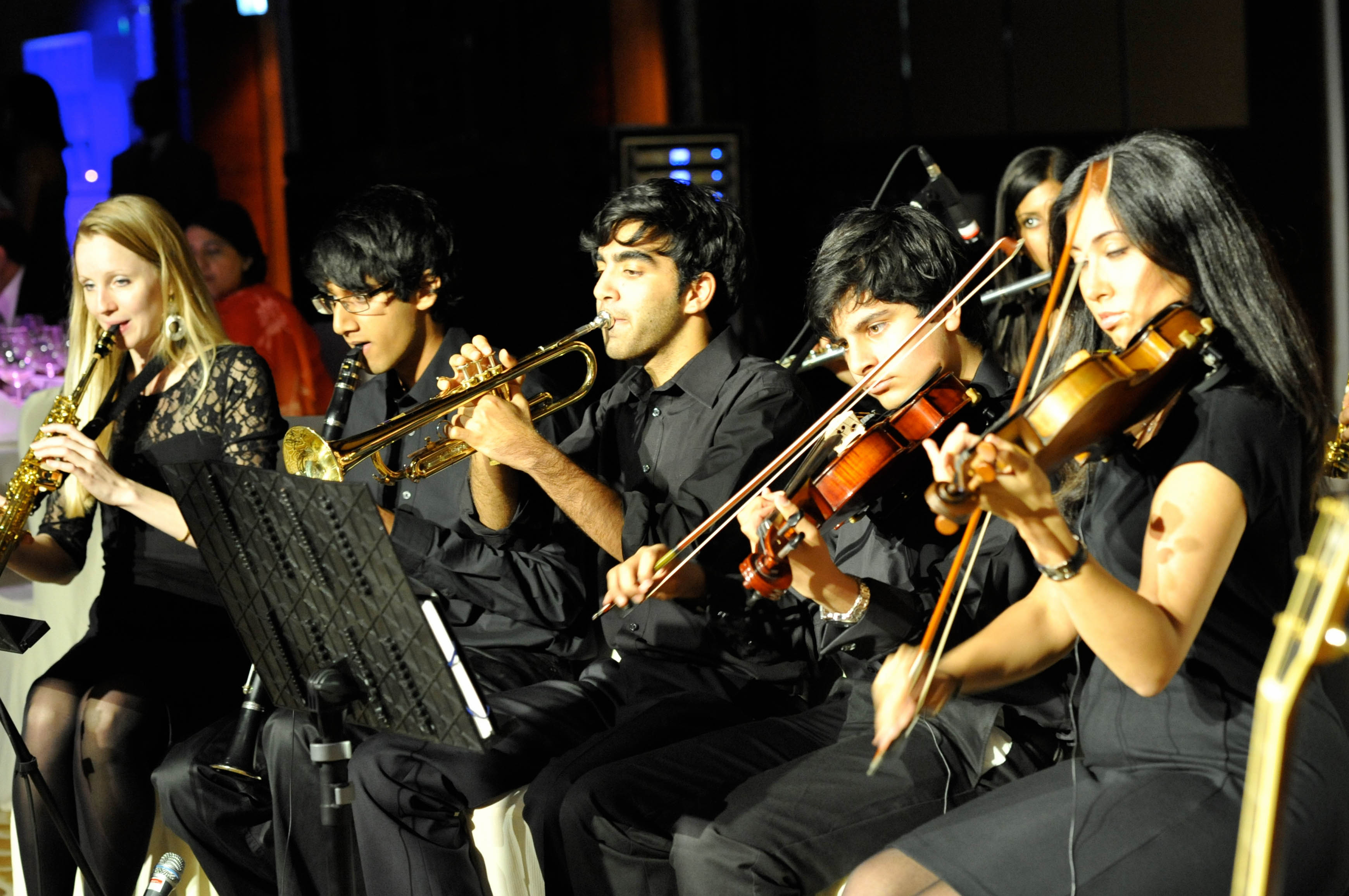 There was dancing and clapping and the group received two standing ovations. Even as the musicians gave of themselves – performing with passion and enjoyment – the audience reciprocated.

The next day we prepared for an evening performance at a gala dinner that would mark the culmination of a FOCUS Golf Tournament Fundraiser. The tournament brought together over 80 golfers and many other FOCUS supporters from around the world for three days at some of the top golf courses in Dubai and Abu Dhabi.

Costs of the volunteer-organised weekend event were underwritten by corporate sponsors including Hewlett Packard, Despec, Item International and Z for Z, allowing the more than half-million dollars raised by the event to go directly to support FOCUS' work in disaster preparedness and emergency response. The Ismaili Community Ensemble provided the main entertainment for the Gala Dinner on the final night.

“It was fantastic that we could bring our own talent from within the Jamat to perform at this high profile evening,” said Riyaz Jamal, the Project Leader for the Golf tournament. “Our guests were stunned by the Ensemble's performance, and even more so when they heard that each of these performers had funded their own travel to Dubai, hence reducing the costs of the event and increasing the funds raised for FOCUS.”

For a second evening, the Ensemble enjoyed a standing ovation as the international invitees gave generously to the humanitarian cause. We were grateful to be part of something that would make a difference to so many lives afflicted by disaster and misfortune around the world.

The weekend held one final thrill. We had the opportunity to visit the Rashid Centre for Paediatric Therapy, a humanitarian organisation providing education and therapy for children with special needs.

Paul has a wealth of experience working with people with learning and physical disabilities, so ICE followed his lead. There was no notion of us and them – it was we. We were all there together, to communicate through the powerful medium of the arts.

Following the event, one of the organisers observed that despite some of the physical or learning disabilities that affected some of the children, “they were not challenged in any way whatsoever in their wholehearted participation.”

“They say that the gateway to the soul is through the eyes,” he added. “And looking at the eyes of these children it was evident that you had brought happiness to these beautiful souls.”

The Dubai experience reiterated the conviction that the Ismaili Community Ensemble has held since its beginning, that music uplifts the soul whether one is listening, playing or creating it. It has the ability to instil joy, to cultivate love and to provoke much reflection.

It is not often that one's heart and soul feels filled to the point of bursting. But that weekend – by sharing music on so many levels with so many different people – we came pretty close.

Rabiyyah Raval has been a vocalist with the Ismaili Community Ensemble since its inception in 2007. 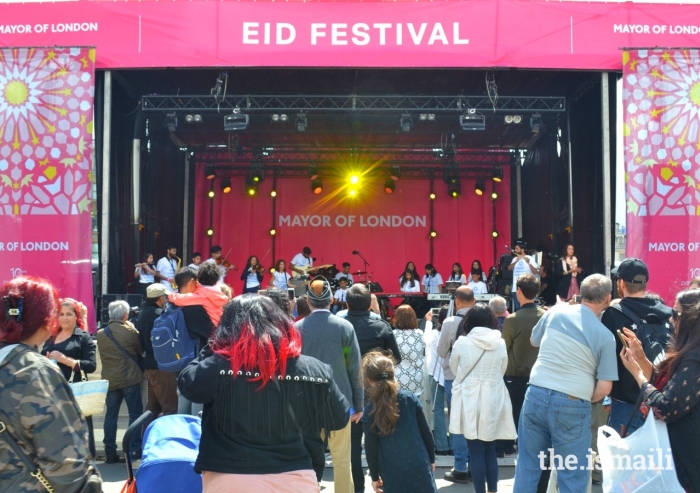 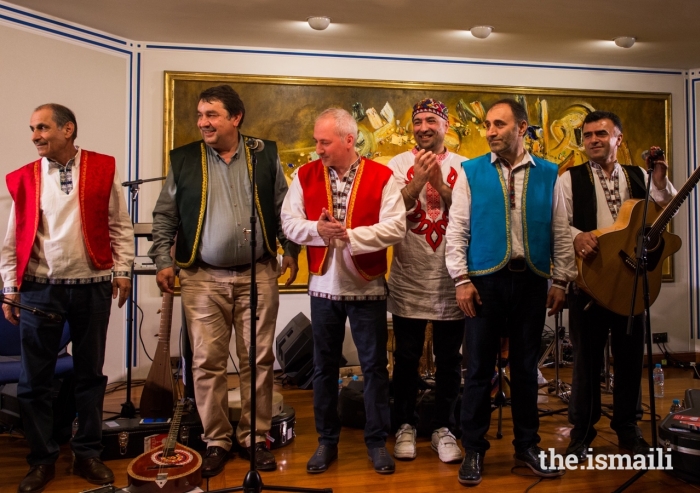