Following successful showings in Paris and Lisbon, RAYS OF LIGHT: Glimpses into the Ismaili Imamat had its North American debut in August in Atlanta. A Golden Jubilee International Programme, this exhibition depicts 50 years of Mawlana Hazar Imam’s Imamat, against the backdrop of the 1 400 year history of Ismaili Imamat.

RAYS OF LIGHT: Glimpses into the Ismaili Imamat had its North American debut at the Gwinnett Center, in Atlanta, on Sunday, 2 August 2009. A Golden Jubilee International Programme, this exhibition depicts 50 years of Mawlana Hazar Imam's Imamat, against the backdrop of the 1 400 year history of Ismaili Imamat. 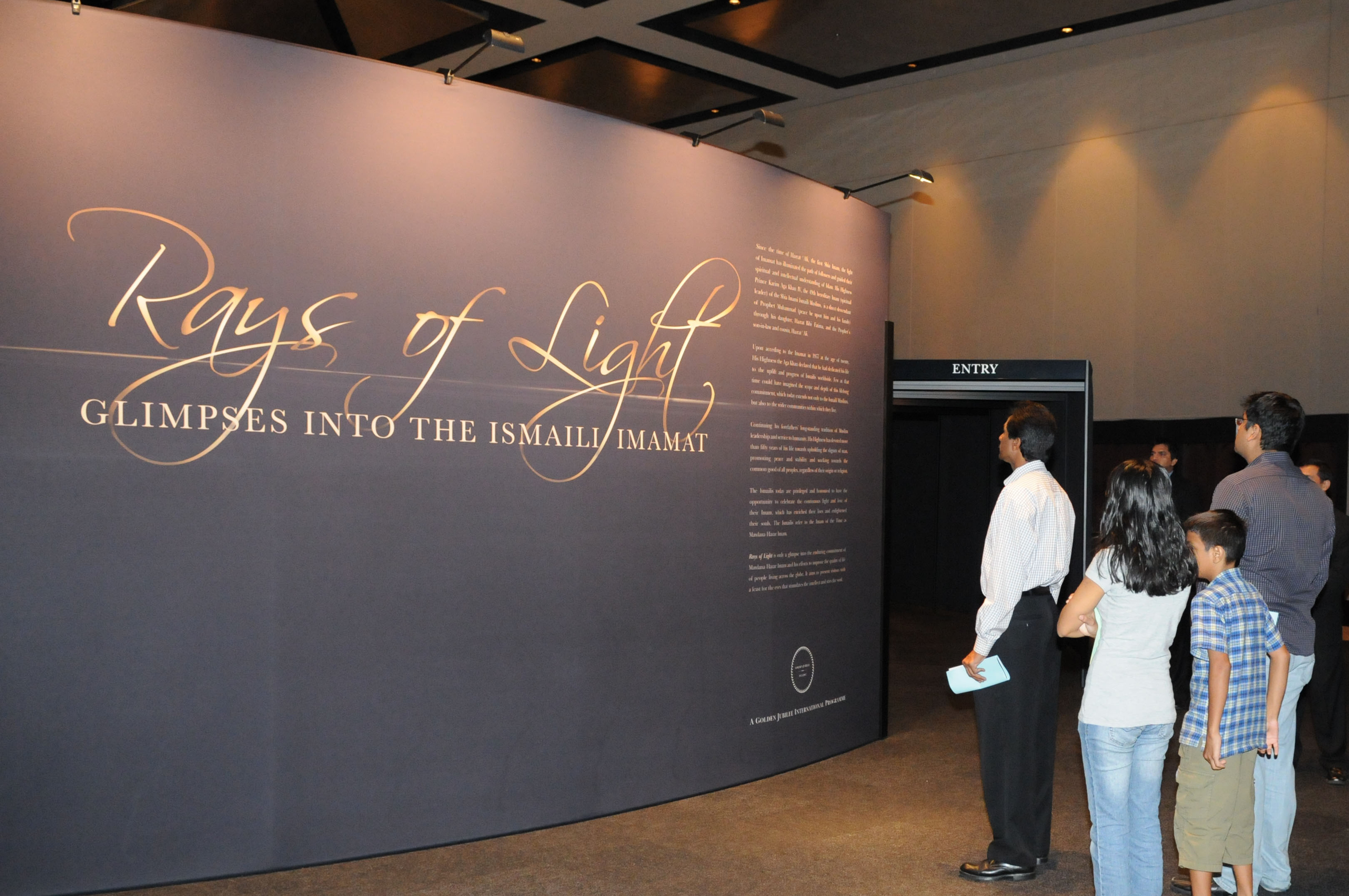 Members of the Jamat wait their turn at the entrance of the circular RAYS OF LIGHT exhibit. Courtesy of the Ismaili Council for the USA

In the Muslim tradition of leadership, going back 14 centuries and covering all interpretations of Islam, the role of the Imam is not only to interpret the faith to his murids but also to lead the effort towards their security and wellbeing – the latter concern also extending to communities among whom they live. In 1957, when he succeeded his grandfather and became the 49th hereditary Imam of the Shia Ismaili Muslims, Mawlana Hazar Imam declared that he dedicated his life to the uplift and progress of Ismailis worldwide. Few at that time could have imagined the scope and depth of this commitment.

Today, the work of the Ismaili Imamat benefits not only Ismaili Muslims, but also the wider society within which they live. “It flows from the mandate of the office of Imam to improve the quality of worldly life for the concerned communities,” said Hazar Imam upon receiving the Tolerance Award at Germany's Evangelical Academy of Tutzing in 2006.

The 4 000 square foot circular exhibition, which incorporates over 200 photographs, imparts a glimpse into Mawlana Hazar Imam's efforts to improve the quality of life of all.

“The exhibition is not just one to be looked at – it is to be experienced,” said Nina Hirji Kheraj, one of the curators of RAYS OF LIGHT. “We hope that visitors will be touched intellectually, emotionally and spiritually by the experience and will leave with an increased understanding of the role of the Imam as a spiritual and world leader, and with a heightened sense of pride in their Ismaili heritage.”

RAYS OF LIGHT originally premiered in France. At the occasion of the final Darbar of Mawlana Hazar Imam's Golden Jubilee, which was held in Paris, Hazar Imam and his family received a tour of the exhibition. Many members of the Jamat from around the world also had an opportunity to experience it. 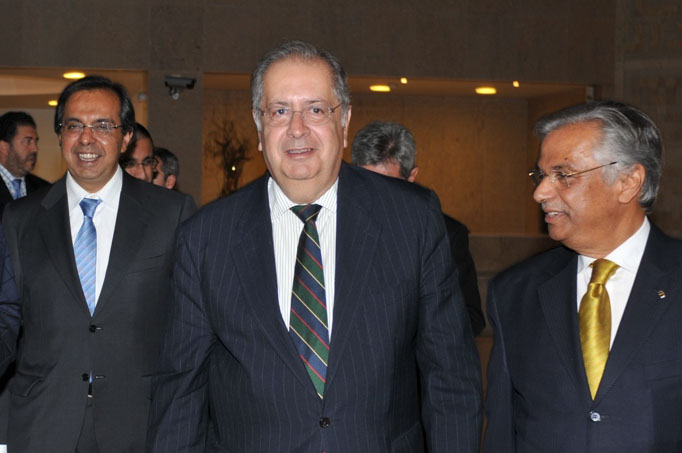 In March 2009, the exhibition travelled to Portugal, where it was formally opened at the Ismaili Centre in Lisbon under the banner of LUZ IRRADIANTE. A number of Portuguese dignitaries were present for the opening, including the President of the Assembly of the Republic, Dr Jaime Gama, as well as current and past government leaders, members of the diplomatic corps, special guests from the Catholic Church, the wider Muslim community and other members of civil society. They were welcomed by the President of the Ismaili Council for Portugal, Amirali Bhanji, and the AKDN Resident Representative in Portugal, Nazim Ahmad.

The Ismaili Imamat has an established history of partnership with Portugal. In recent years, a Protocol of Cooperation and an Agreement of International Cooperation were signed between the Government of the Portuguese Republic and the Ismaili Imamat. These have led to a unique partnership between the Aga Khan Foundation Portugal and the Patriarchate of Lisbon, and an agreement of academic collaboration between the Aga Khan University and the Catholic University of Portugal.

“The beneficial impact of these initiatives across all segments of the Portuguese civil society has promoted an even better understanding and spirit of collaboration between the Imamat Institutions, the Portuguese people and the Ismaili community,” said President Bhanji. He noted that the agreements signal a common intent to work towards the improvement of the quality of life of vulnerable populations.

Opening of the Atlanta exhibit 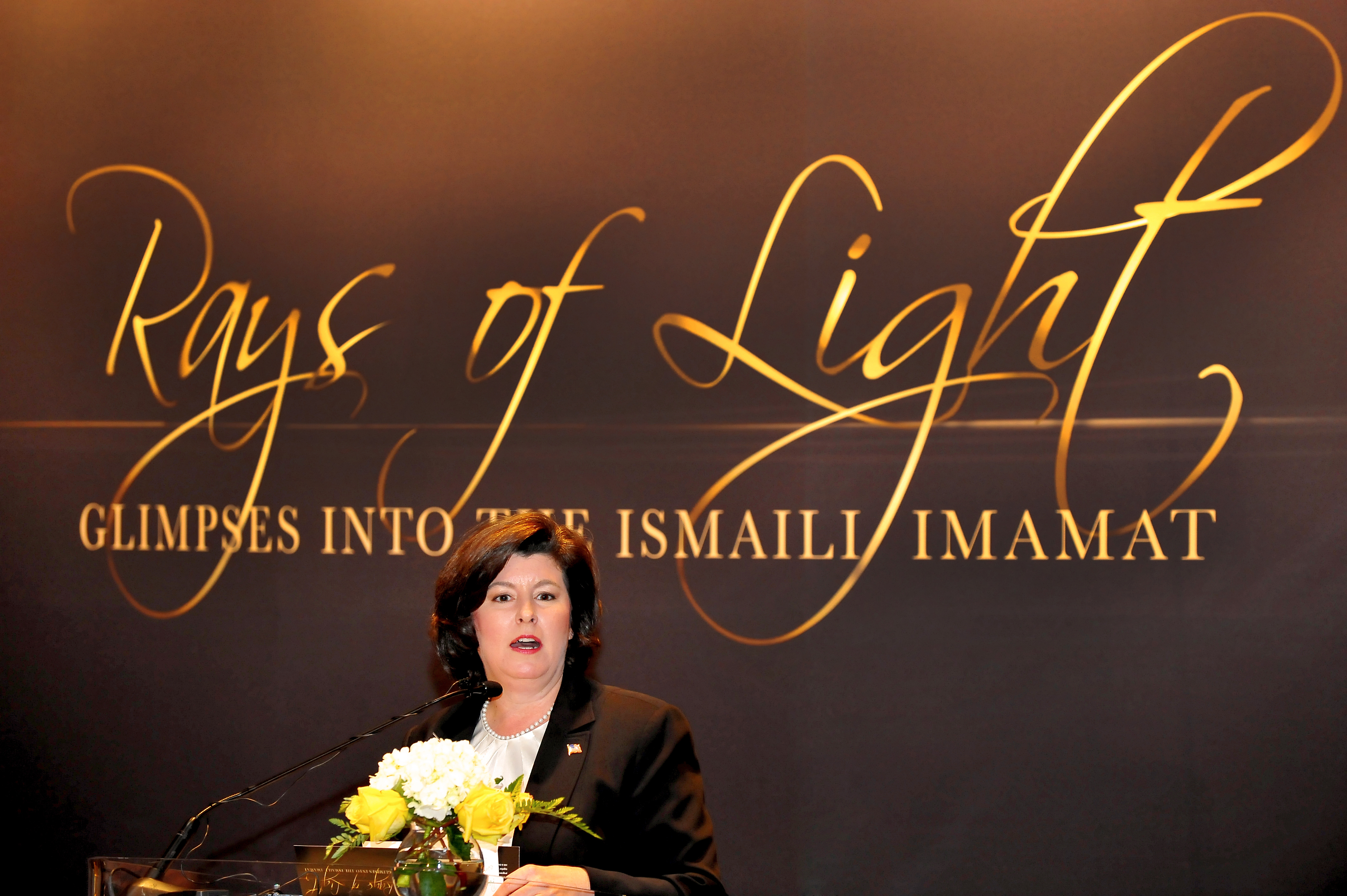 The Secretary of State of Georgia, Karen Handel, addresses dignitaries at a reception for the RAYS OF LIGHT exhibition in Atlanta. Courtesy of the Ismaili Council for the USA

To mark the arrival of RAYS OF LIGHT in Atlanta, the Ismaili Council for the Southeastern United States hosted a formal reception and tour, which was attended by state and local government officials, as well as leaders in education, health and business. The exhibit was formally opened by Karen Handel, the Secretary of State for the State of Georgia.

“We have been so fortunate and blessed for you to call Georgia your home,” said the Secretary of State, addressing the Ismaili community in Georgia. “We know your focus on economic development – but also on improving the human experience here and around the world – and it has made our state and our communities a richer, richer place.”

The wide range of Mawlana Hazar Imam's accomplishments during the past fifty years impressed the guests. During his tour of the exhibit, Dr Gordon Newby, Chair of Near Eastern Studies at Emory University, expressed that Harvard University must be extremely honoured to count the Aga Khan among their alumni.

Muhammad Aslam Khan, Deputy Chief of Mission of the Embassy of Pakistan, said that he holds a “great respect for His Highness and his followers.” He also expressed admiration for the contributions of Hazar Imam's family and added: “I am a personal witness of his work in education, health, culture, architecture, religion” 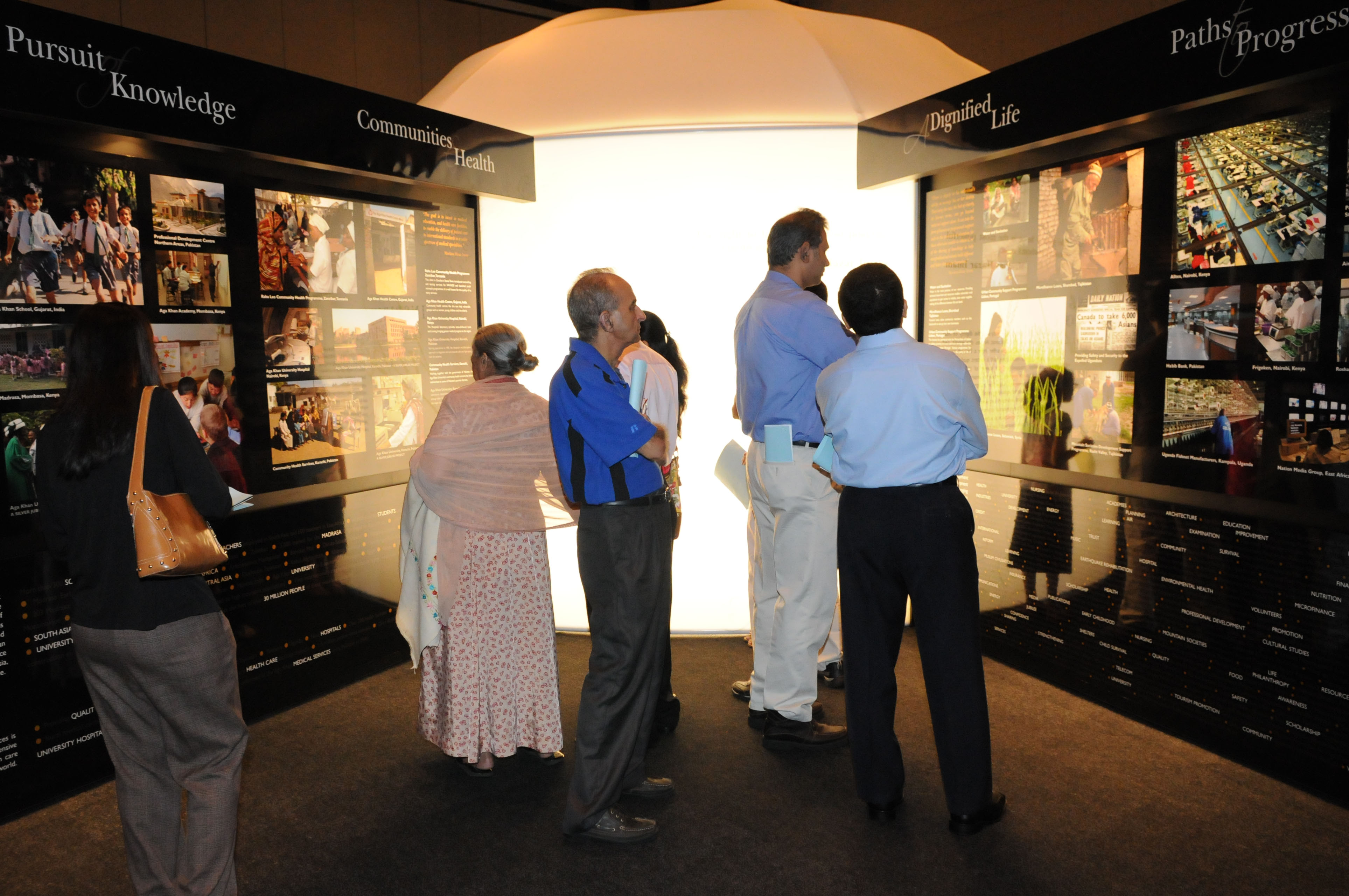 Visitors examine photographs illustrating some of the work that Mawlana Hazar Imam has undertaken during the past 50 years. Courtesy of the Ismaili Council for the USA

As the door to the Atlanta exhibition opened, groups were led into the softly-lit hall that housed it. The visitors took their time, examining the photos, reading the captions, asking about the events depicted, and circling back to revisit the same spot – only to discover something new. Each stood in awe in the dome, where they took in images of Mawlana Hazar Imam next to the Preamble of the Ismaili Constitution, or standing amongst murids in Tajikistan as he looked across the Pyanj river at the Jamat in Afghanistan.

Visiting from Vancouver, Canada, Taufiq Mitha felt the exhibition offered “only a small glimpse into the Imam's life.” He said that it “reminds us of the grace, humility and true compassion with which the Imam lives his life, and inspires us to do so as well.”

For Nurani Esmail, RAYS OF LIGHT illustrated Hazar Imam's “dedication and hard work for the betterment of all human beings.” It made her feel “proud to be an Ismaili.”

There were moments of silent and serene reflection, of tearful memories and moments where visitors could not hold back the joy, amazement, awe and pride at the achievements of the 49th Imam. Passing through the exit tunnel, taking in the sound of the Nashid al-Imamah and the photograph of Hazar Imam's family taken at Aiglemont on 11 July 2007, many were touched by an undeniable sense of upliftment.

Having completed its showing in Atlanta on 12 August, RAYS OF LIGHT is now moving to Orlando, where it will be on display between 26 September – 4 October. From there it is expected to travel to other major US centres, including Dallas, Houston, Los Angeles, Chicago and New York.