Skip to main content
Home > Building on a duke’s legacy: Mawlana Hazar Imam gives back in his own neighbourhood of Chantilly
Related Information
Chantilly and the duc d'Aumale
Delacroix et l'aube de l'Orientalisme (Delacroix and the Dawn of Orientalism).

Chantilly, a historical 20 thousand-acre princely estate and a jewel of French culture, is undergoing a massive 20-year revitalisation effort led by Mawlana Hazar Imam. At the end of September, four new projects on the estate were inaugurated before a gathering of distinguished guests. 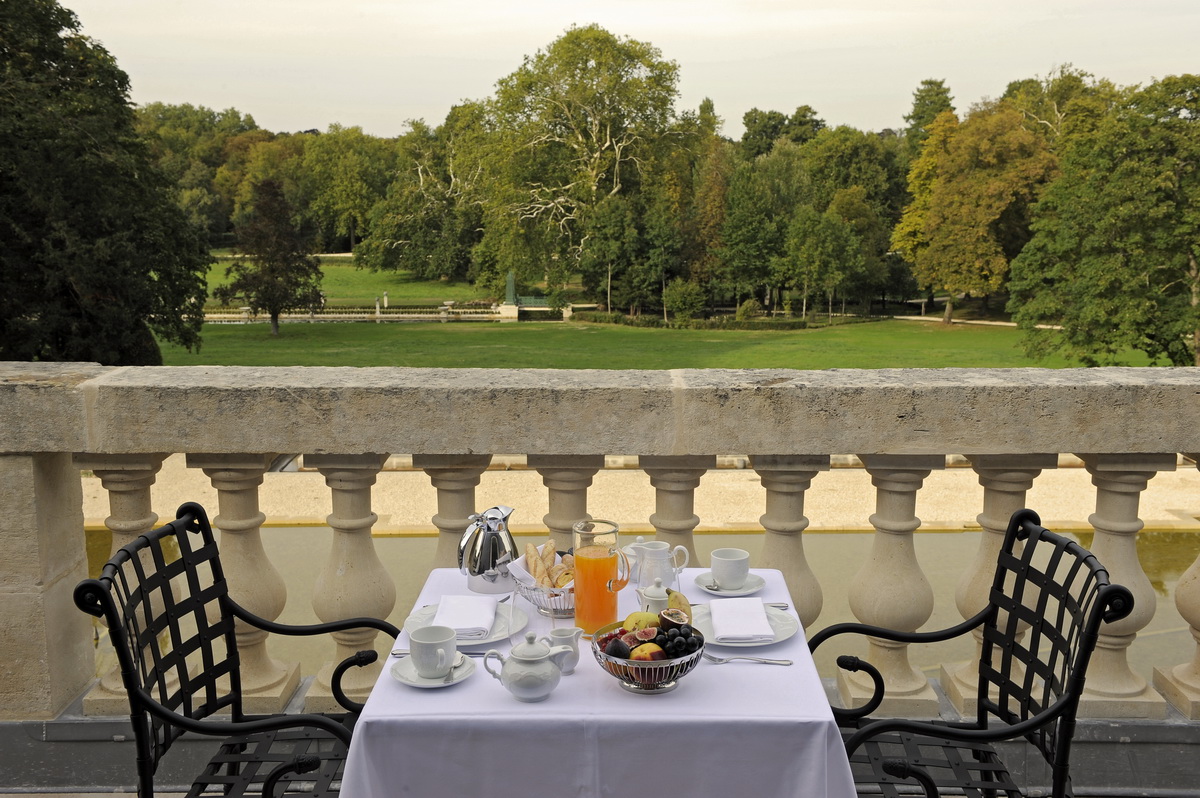 Looking out over the Domaine de Chantilly from the Auberge du Jeu de Paume. Gary Otte

In 1884, Henri Eugène Philippe Louis d'Orléans, a prince of France better known as the duc d'Aumale (Duke of Aumale), bequeathed a 20 thousand-acre estate to the Institut de France. The ancient property – whose records can be traced as far back as the 14th century – included a park, manicured gardens, a grand stables, and the historic Chateau de Chantilly.

But by the turn of the 21st century, time had taken its toll. The lustre of the Domaine de Chantilly had faded, and although the great maîtres d'œuvres and the equestrian tradition continued to draw visitors, the property required extensive upgrading and restoration, as well as a comprehensive plan to sustain its future.

Chantilly and the duc d'Aumale 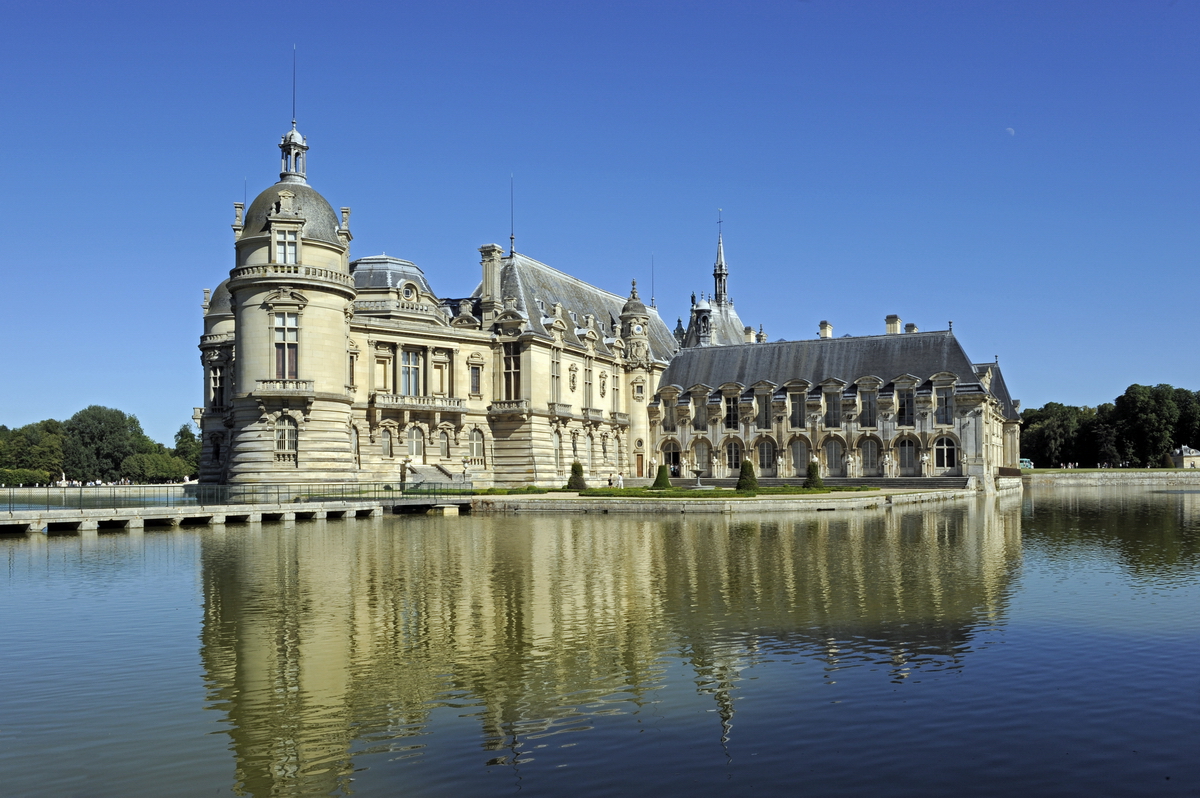 Situated in the valley of Nonette some 40 kilometres north of Paris, the Domaine de Chantilly records a history that stretches back over six centuries.

A great jewel of French culture and tradition, the chateau houses France's second most important collection of art after the Louvre. Sections of the stables – which anchored Chantilly as a premier centre for racing and breeding horses in Europe – were eventually converted into a unique museum of equine art and culture known as le Musée Vivant du Cheval (the Living Museum of the Horse).

Recognising an opportunity to give something back in his own neighbourhood, a “prince of the modern era” took up the cause of Chantilly, honouring the legacy of the duc d'Aumale.

“The ambition of the great French princes has now been taken up by Your Highness; you have become the architect of a spectacular renaissance,” said Frédéric Mitterrand, the Minister of Culture and Communication, as France decorated Mawlana Hazar Imam with the Commander of the Order of Arts and Letters in November 2010.

“My experience with social questions of [cultural] patronage and the fact that I live in the area, led the various stakeholders to ask me to be president of the Foundation for the Preservation and Development of the Domaine de Chantilly,” commented Mawlana Hazar Imam in a July 2012 interview with Paris Match.

For several decades, the Ismaili Imamat has through the Aga Khan Trust for Culture invested in the restoration of cultural assets in many parts of the world, demonstrating the positive social and economic returns they could generate for their surrounding communities. The Fondation de Chantilly – established by Mawlana Hazar Imam in 2005 – seeks to similarly leverage the area's cultural assets to create a sustainable model for heritage preservation and contribute towards social, cultural and economic development in the region. It is the linchpin of a public-private partnership between the Imam, France's ministry of culture, the region of Picardie, the department of Oise and the Institut de France. Seventy million euros have been allocated to underwrite a series of revitalisation projects over a 20-year timeframe. 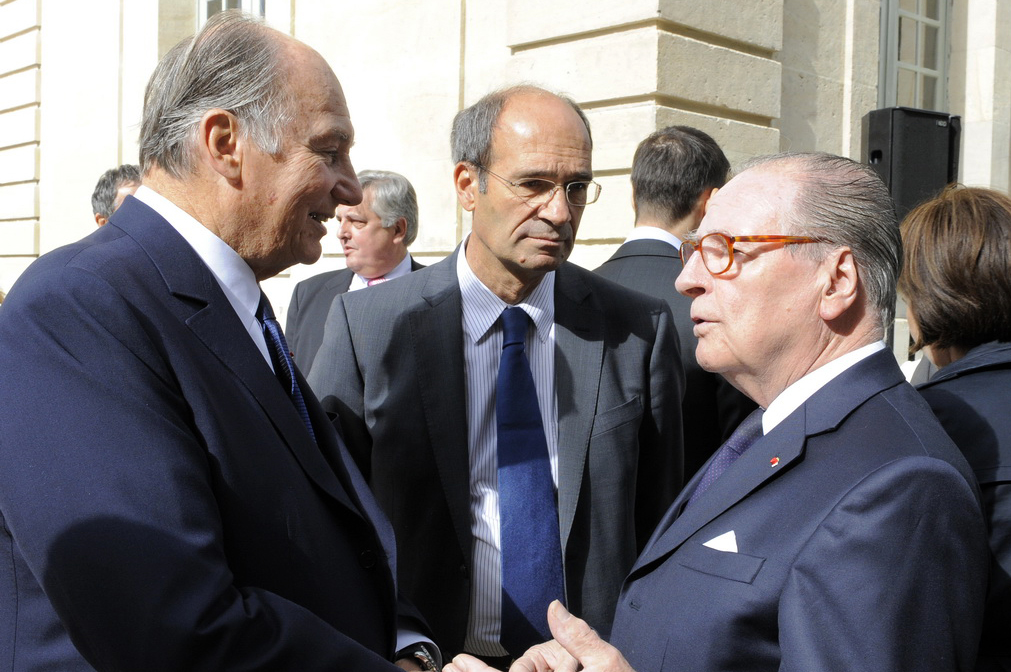 Only seven years into its mandate, the Foundation is already making an impact. The restoration of the Musée Condé, including la Grande Singerie (the Great Monkey Suite), one of the chateau's finest decorative ensembles, was completed in 2007. The famed Chantilly gardens designed by André Le Nôtre (1613–1700), who went on to design the gardens of Versailles, were restored between 2006 and 2009.

Most recently, on 29 September 2012, a gathering of distinguished guests marked the completion of four more projects: the re-opening of the Salle du Jeu de Paume, the Jardin Anglais, the rue du Connétable and its archway the porte Saint-Denis, as well as the inauguration of a new hotel called the Auberge du Jeu de Paume, situated within a short walk of the Chateau.

“You are, my lord, a builder, who walks in the footsteps of that other great patron – the duc d'Aumale,” said Gabriel de Broglie, Chancellor of the Institut de France, addressing Mawlana Hazar Imam at the inauguration ceremony. “The completed projects that we are visiting today... are the image of your tireless energy. This is an event in the history of the Domaine and the town of Chantilly, that is certainly without precedent.” 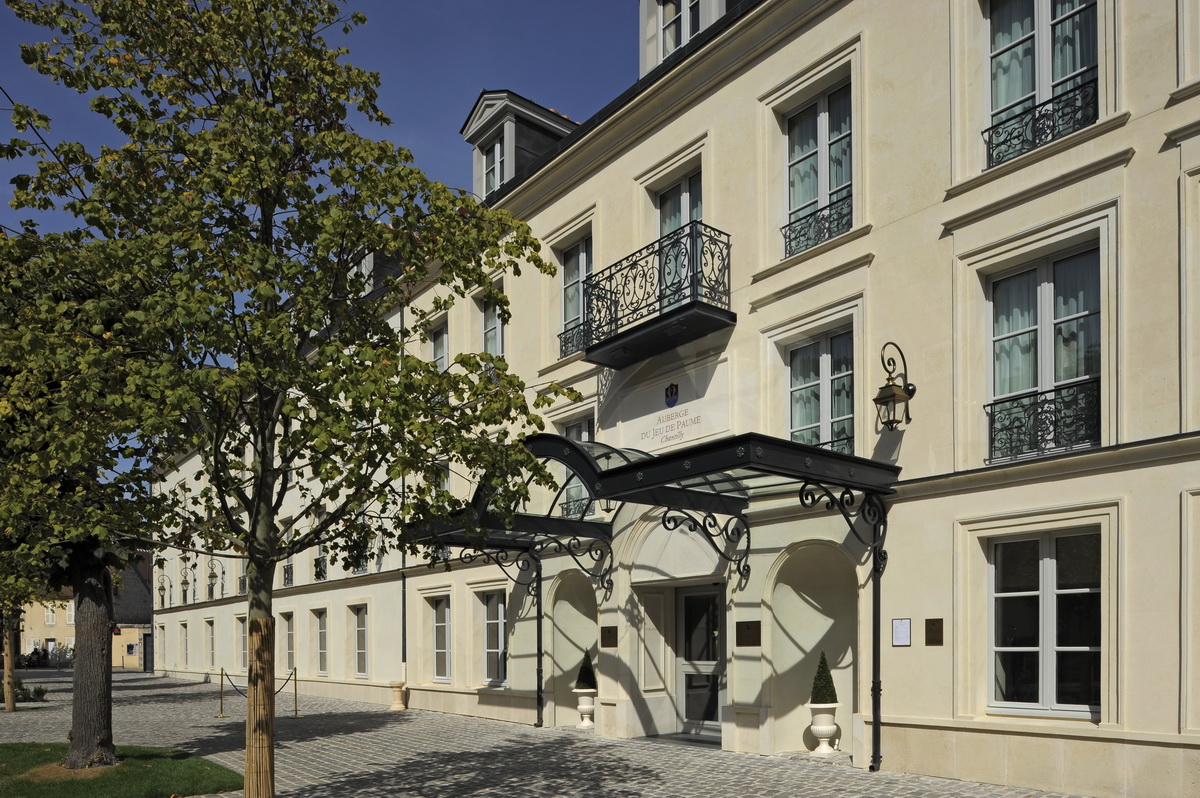 The Salle du Jeu de Paume recalls an epoch when the jeu de paume (game of the palm), a precursor to modern tennis, was a popular sport among the nobility. The room was redeveloped to stage art exhibitions, complete with necessary public amenities and environmental controls. Its inauguration also marked the opening of an exhibition titled Delacroix et l'aube de l'Orientalisme (Delacroix and the Dawn of Orientalism).

Adjacent to the exhibition space is the Auberge du Jeu de Paume, a hotel built by Mawlana Hazar Imam to revitalise the urban area surrounding the Domaine de Chantilly. Part of a comprehensive plan to increase the number of tourists who visit the area, the hotel complements the efforts undertaken by the Fondation de Chantilly. Profits from the Auberge will provide a sustainable source of income for the preservation and future development of the Domaine, and Hazar Imam has indicated his intention to gift the hotel to the Institut de France for that purpose.

The inauguration also marked the re-opening of the adjacent Jardin Anglais, the cobbled rue du Connétable and its distinct archway, the porte Saint-Denis, that lead visitors into the Chantilly estate.

Drawing on the Imamat's vast experience of cultural revitalisation, Mawlana Hazar Imam noted that in order to succeed, the restoration of a historic place must “fit into an overall plan for the city at large and be sustainable over time.” 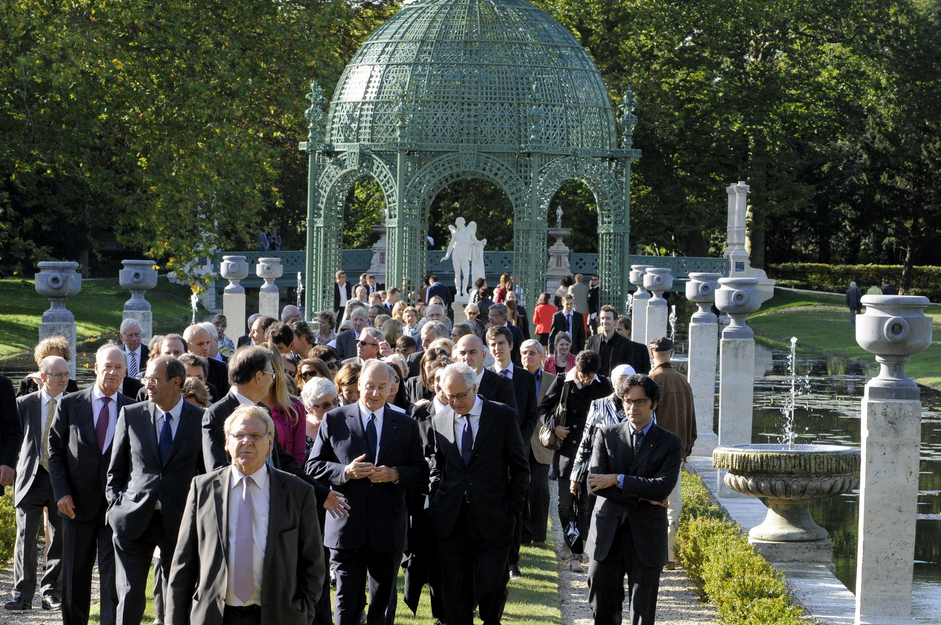 “It is a delicate exercise,” said Hazar Imam, adding that to succeed one must account for the wishes of the area's inhabitants, their civic representatives, and the expectations of potential visitors. “But one must also immerse oneself in the history of the place, its profound culture and its economic life.”

And there remains much more to come in the years ahead. The Museum of the Horse is being upgraded and transformed, and will feature exhibitions on the civilisations of the horse in the Orient, Europe and the Americas. The first phase of this project is scheduled to open in June 2013 in the Cours des Remises of the Grand Stables.

“Chantilly is a giant that is awakening,” said Mawlana Hazar Imam in a June 2012 interview with Le Parisien. “It is my conviction that the end result will justify the effort.”

The duc d'Aumale would undoubtedly agree. 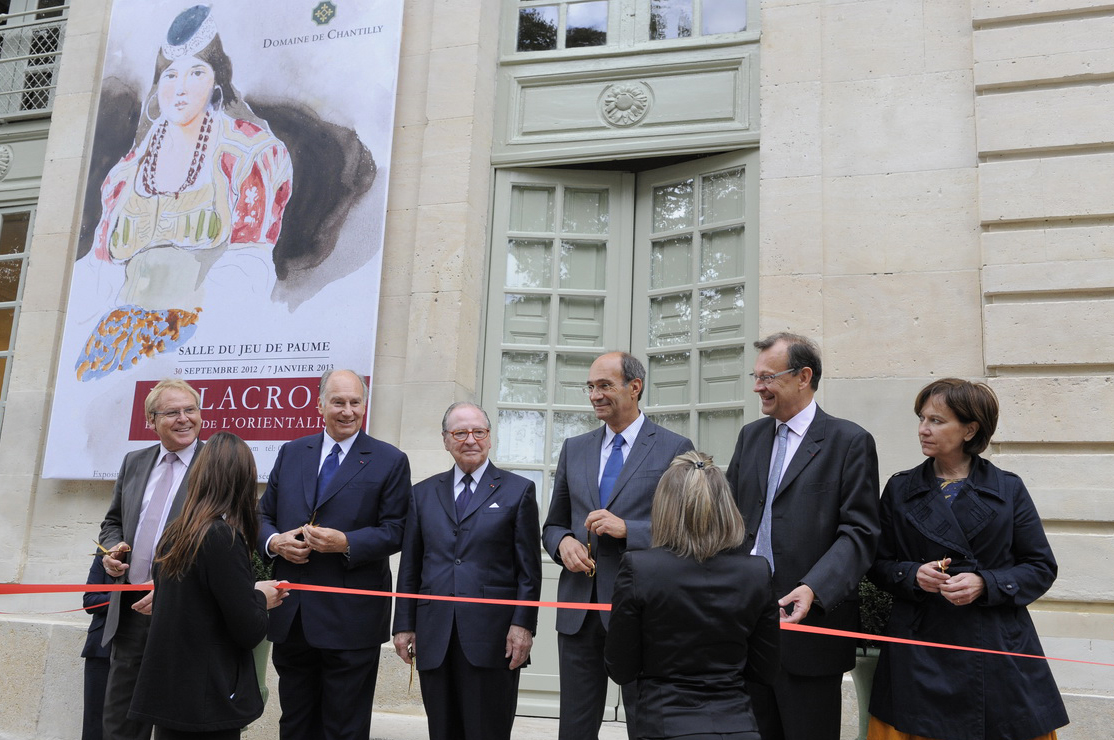 Mawlana Hazar Imam takes part in a ribbon cutting, marking the completion of four new projects in the Domaine de Chantilly and the opening of the Delacroix art exhibition in the Salle du Jeu de Paume. Gary Otte

Ethic of pluralism explored at institutional dinner in France