Several North American-based Ismaili artists talk about what draws them to create art. They also discuss how Islamic themes and symbols influence their work, and how they use art to give expression to their personal faith interpretations while exploring cultural heritage and celebrating identity.

Of his childhood home in Sweden, Vancouver-based artist Mohamed Somani recalls one painting in particular – he would spend hours laying on the sofa, absentmindedly gazing up at it. 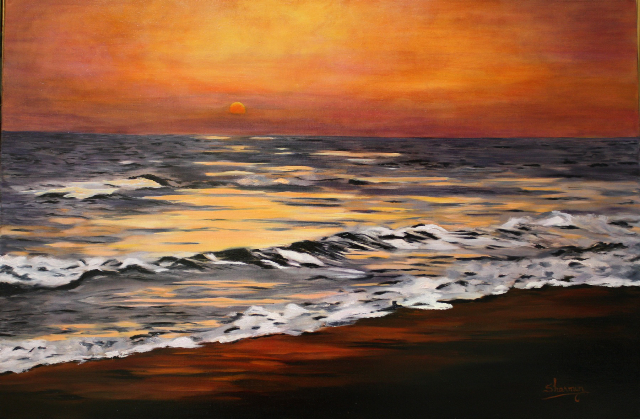 Sunset Serenity – This painting shows a glow in the sea, adding not only beauty to the waves but creating a sense of peace. The brilliant light in the sky reflects on the sea, which shows how the light in a person can influence others around him in a positive manner. Painting: Sharmyn Ali

Adorned in an elaborate golden frame, it depicted a Dutch-style landscape, with a small stream running through the middle, spanned by a bridge that allowed unseen travellers to cross over. Beyond the bridge was the edge of a town, faintly depicted in the distance.

“I would try to ‘enter' the painting by imagining walking through that landscape, checking what was behind the bridge, beyond the trees, or at the edge of the town,” says Somani. “During such moments I always felt like an infiltrator, moving stealthily where I wanted to go, like that rare feeling of being in a dream and realising it, but rather than waking up, being able to influence it according to your whim.”

He recalls having all kinds of adventures set within the painting. “That's the way a work of art should function. It should nurture you day to day,” he adds. Art has since become a part of his daily routine, a compulsion that goes beyond passion. “When I'm producing art, at the best of moments, time moves at a different pace. Those small brief moments really have a great deal of value.”

Sharmyn Ali, a Houston-based painter, uses her art to convey interpretations of the world around her. “Painting is a part of me now – it becomes a necessity,” she says. “I love what I do and I consider myself blessed that I can do what I love. When I'm painting, my creative juices start flowing – if I don't paint, something is missing from my life.” 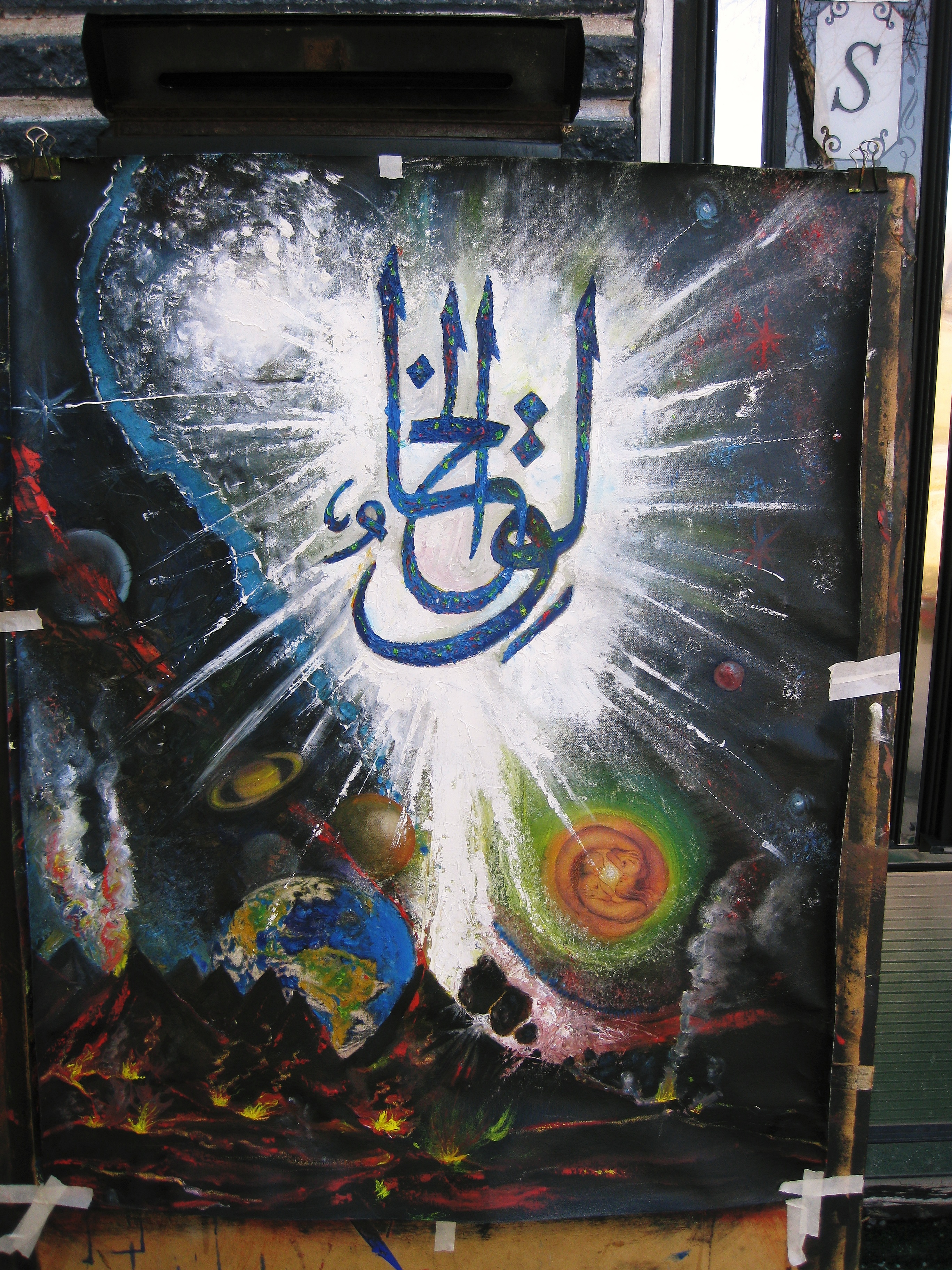 Al Khaliq: the Creator – Here, Rajabali offers his interpretation of the Creation of the Universe. Painting: Madadaly Rajabali

Chicago-based artist Madadaly Rajabali shares the sentiment: “I think art is not something that you choose. I don't think it works that way. It's something that is just there,” he says. He felt compelled towards art: “I never even thought about becoming an engineer or a doctor. I didn't have a choice.”

For Somani, Ali, and Rajabali, art is intricately tied to their Ismaili Muslim faith. Sometimes, the Islamic themes are explicitly depicted – through calligraphy, for example. At other times, the influence is more subtle.

Somani finds inspiration in the Qur'an and Muslim history, and evokes some of these stories on his canvas. Among the stories that touched him is a hadith titled The Event of the Cloak. It is an account of a moment in which Prophet Muhammad (peace be upon him and his family) arrives at Hazrat Bibi Fatima's home. He is tired, and upon his request she wraps him in a cloak. Hazrat Hasan arrives and requests to join Prophet Muhammad under the cloak. He is soon followed by Hazrat Husayn, Hazrat Ali and Hazrat Bibi Fatima, all of whom join the Prophet underneath the cloak. Mohamed was inspired to present an interpretation of this story in his work, which he named after the hadith.

“I wanted to universalise that moment,” says Somani. “The story unfolds perfectly until final moment when they're all under the quilt. It's a spiritual moment.” The moment, he believes, could still be significant to even those who may not be familiar with the story's Islamic context. Therefore, his portrayal of the event approaches the story from a different angle. He abstracts the story from its origins. Instead of depicting the home presented in the actual story, the cloak is the focus of the painting, with a dark night sky in the background. 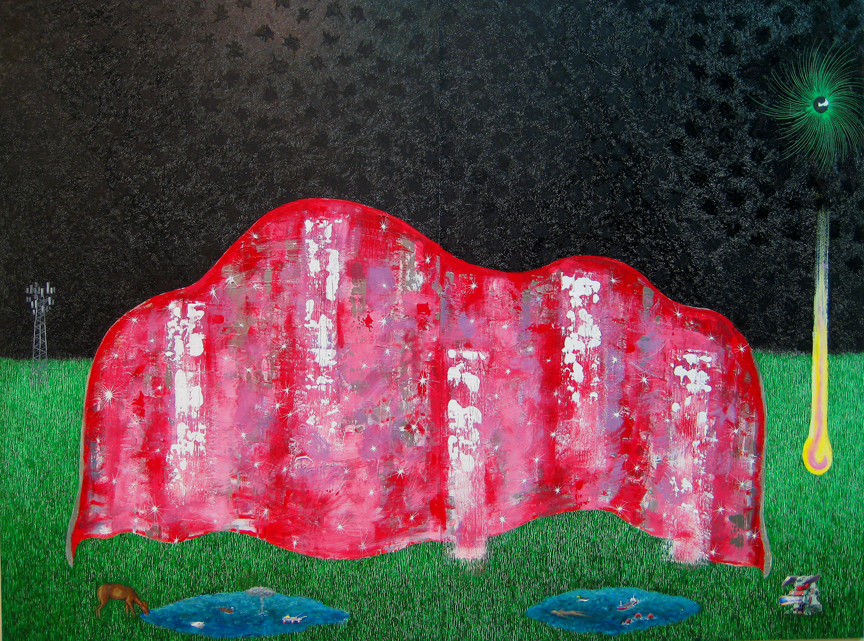 Event of the Cloak – Somani finds inspiration in the Qur'an and Muslim history, and evokes some of these stories on his canvas. Painting: Mohamed Somani

“I wanted to bring it to the present,” Somani adds. “On a philosophical basis, I see art as being like an exercise in the process of belief. When you're looking at art, that artist is trying to convey to you a totality of some sort, and for the moment that you're totally engaged, you're setting aside your preconceptions.”

Islam is also conceptually embedded in the techniques these artists use. For instance, Ali uses light to represent the divine nur. “I am trying to show light as guidance, as inner peace, as hope–and all this comes from God,” she says.

Famed Islamic mosques and masjids also serve as a source of inspiration for many Ismaili artists. The Alhambra mosque in Spain and the Char Minar mosque in Bukhara, Uzbekistan, have been a source of inspiration for college student Zainab Khuwaja. She is also inspired by the styles of architecture developed in India during the Mughal Empire, a period during which Islamic rulers like Jalaluddin Mohammad Akbar – also known as Akbar the Great – were great patrons of the arts.

Khuwaja incorporates facets of mosque architectural detail into her artwork, using materials such as glass tiles and ceramic elements. Arabic calligraphy also features in her work. 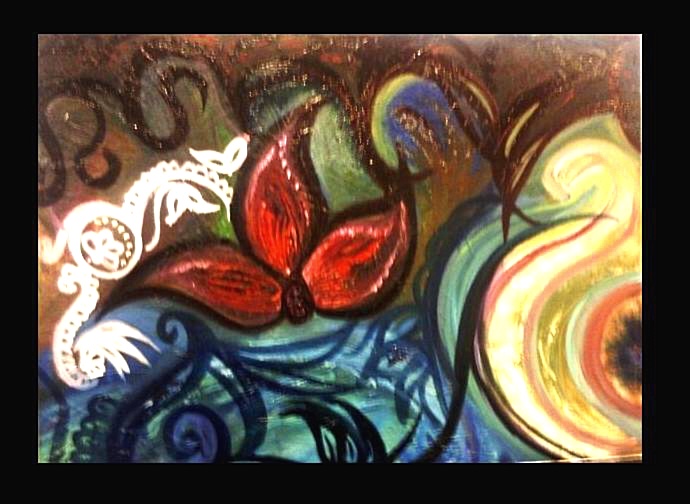 Forest Jewels – The painting depicts a forest is filled with wildlife, plants and exotic animals. The colours abstract the artist's feelings for the forest. Painting: Zainab Khawaja

“Faith has been the generating force behind my artwork, even if my paintings do not represent Islam directly,” Khuwaja says. “It has highlighted my own historical preferences, but at the same time it has forced me to explore and interact with different styles.”

Through her work, Khuwaja also tries to confront misconceptions surrounding Islam. “There are a lot of generalisations drawn when you mention that you're a Muslim. Within my own school and community, I want to promote the purity and peace of the faith. I want people to see it as for what it really is,” she says. 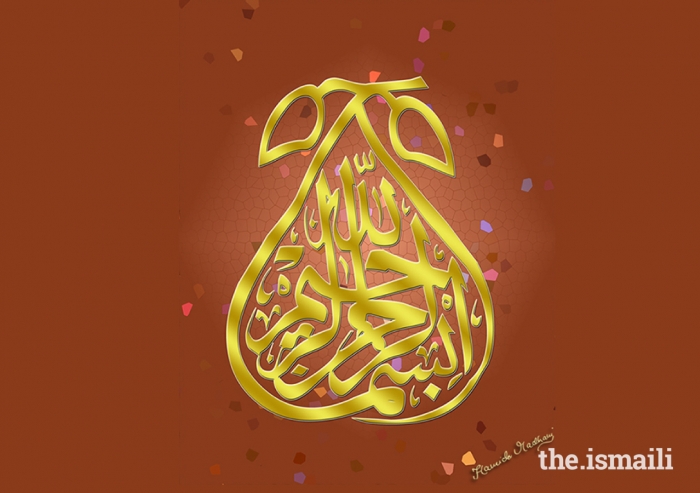 Technology adds a new dimension to ancient art of calligraphy 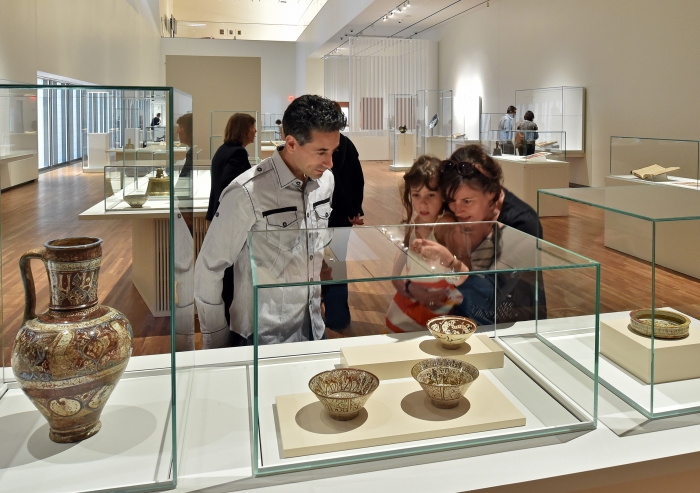