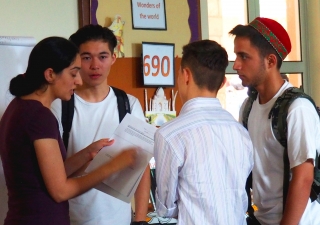 This summer, 160 Ismaili students and volunteers gathered in Mombasa to take part in Global Encounters 2015. Now in its third year, the programme brought together youth and young professionals from 24 countries to renew a tradition of global citizenship and experience living as part of an international community.

Athletes and spectators from across Canada will be in Calgary over the August long weekend for the 2015 Canadian Ismaili Games. Organisers are expecting record numbers at the Canadian qualifier event for the 2016 Jubilee Games.

Global Encounters, an international camp for Ismaili youth, is about making connections, serving humanity and exploring Ismaili Muslim faith and values. Applications for the 2015 cycle to be held at the Aga Khan Academy, Mombasa are being accepted until 7 February.

Unveiling the Aga Khan Museum and the Ismaili Centre, Toronto.

As finishing touches are applied to the Ismaili Centre, Toronto, newly trained tour guides received their first walk-through of the facility. When the doors of the Centre finally open, the guides will help visitors to discover the building and provide a window on the Ismaili community, its values and aspirations.

Chicago, 30 August 2014 – Two days into the North American Ismaili Games, the biggest draw so far has been the dance competition. Word spread quickly following an incredible set of performances on day one, and a crowd of over 800 spectators showed up for Saturday’s shows.