About the South Asian Food Survey

The South Asian Food Survey is a research project that investigated the nutrient content of foods commonly consumed by various South Asian groups living in the United Kingdom. 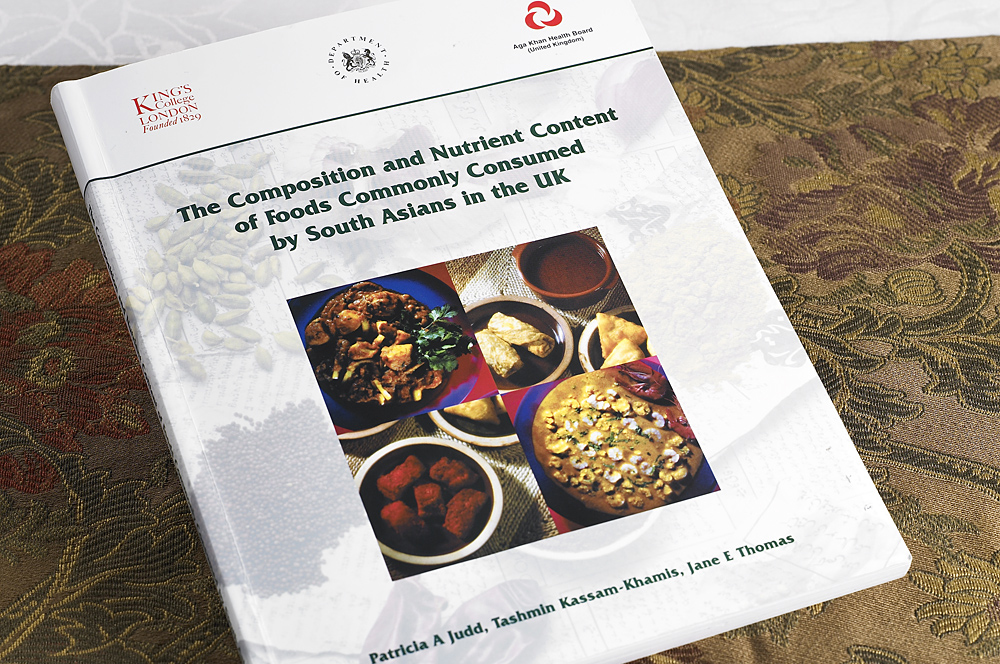 The South Asian Food Survey* is a research project that investigated the nutrient content of foods commonly consumed by various South Asian groups living in the United Kingdom. Initiated by the Aga Khan Health Board (UK), the project was jointly funded by the Aga Khan Foundation (UK) and the Government of the United Kingdom through the Department of Health and the then Ministry of Agriculture, Fisheries and Food.

The South Asian Food Survey gathered — for the first time — information about the foods commonly eaten by South Asians in the United Kingdom. It then analysed what these dishes consisted of so that they could be nutritionally compared with government recommendations on diet and health.

Undertaken as part of a PhD programme at the Department of Nutrition and Dietetics at King's College London, the research was led by Professor Patricia Judd, Dr Tashmin Kassam-Khamis, and Jane E Thomas. The study focused on foods frequently eaten by five South Asian communities in the UK: the Ismaili Muslims (most of whom migrated to England from East Africa, but whose cultural roots are of the Indian sub-continent), Pakistani and Bangladeshi Muslims, and the Hindu and Sikh communities.

Results of the study were published in 2000. They offer a detailed analysis of the nutritional content of commonly eaten dishes, which includes some naturally healthier, lower-fat variations. You can download the full dataset here.

The Ismaili Nutrition Centre offers a selection of recipes with their nutritional composition and includes a selection of recipes from the South Asian Food Survey publication. They have been tested and revised where necessary, for taste or practicality. The site currently includes dishes eaten by the Ismaili, Pakistani and Bangladeshi communities. In time, new recipes from different sources will be nutritionally analysed, allowing the library to reflect an even greater range of recipes.

Why is this data important?

Non-communicable diseases (NCDs) such as Type 2 diabetes and cardiovascular disease are more common in South Asian communities than within the wider UK and European population. Governments and health organisations worldwide have developed guidelines that suggest recommended intake of nutrients such as fat, saturated fat, sugar and salt. These recommendations help to prevent and manage these conditions. The Ismaili Nutrition Centre and the South Asian Food Survey nutritional data on traditional foods can better equip healthcare professionals to provide their patients with tailored, culturally appropriate dietary advice. Furthermore, the data from the South Asian Food Survey is integrated into Microdiet, a nutrient analysis software system used by registered dietitians and nutritionists.

In order to be useful to the general public, much of the South Asian Food Survey data is presented on this website in a simple and accessible manner, together with a host of other authentic recipes, many with healthier alternatives.

Patricia A Judd, Tashmin Kassam-Khamis, Jane E Thomas. The Composition and Nutrient Content of Foods Commonly Consumed by South Asians in the UK, 2000. Published by the Aga Khan Health Board for the UK. Received the British Dietetic Association Rose Simmons Memorial award for 2001.
ISBN 0-9537882-3-7.