As part of Canada’s expression of the Olympic Truce, Her Excellency the Governor General of Canada led a Truce Dialogue in the run-up to the Vancouver 2010 Winter Olympic Games. The Dialogue, which took place at the Ismaili Centre, Burnaby, aimed at engaging youth on the topic of peace-building through sport. 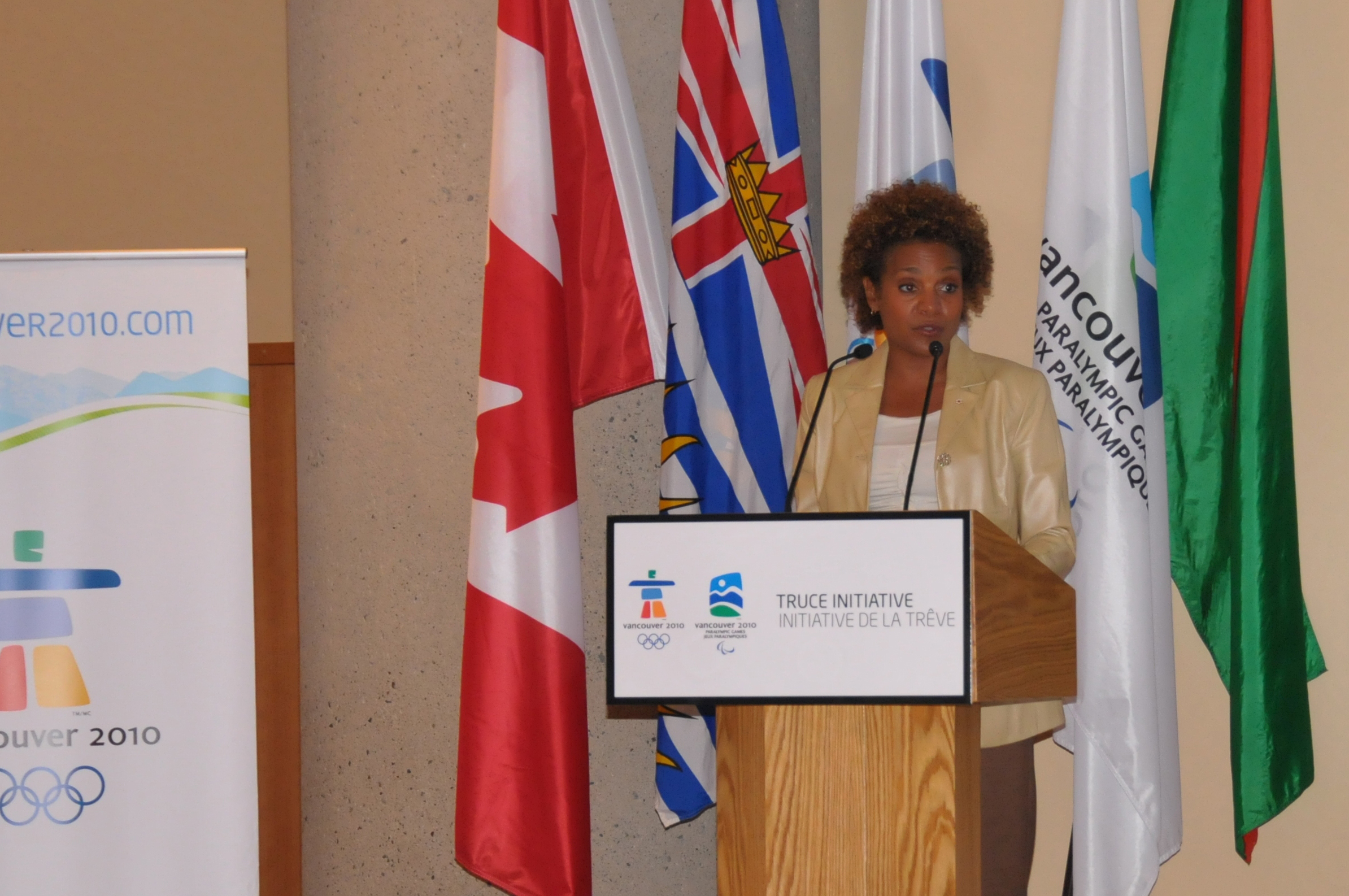 Her Excellency the Right Honourable Michaëlle Jean, Governor General of Canada, addresses the audience at the Truce Dialogue for youth held at the Ismaili Centre, Burnaby. Aziz Ladha

On Monday, Her Excellency the Right Honourable Michaëlle Jean, Governor General of Canada, led a Truce Dialogue as part of Canada's expression of the Olympic Truce in the run-up to the Vancouver 2010 Winter Olympic Games. The Dialogue, which took place at The Ismaili Centre, Burnaby, aimed at engaging youth in meaningful and action-oriented conversation on the topic of peace-building through sport and culture.

“The Olympic Truce tradition gives us an opportunity to really think about what peace really means,” noted the Governor General. “It allows us to reflect on our roles as ambassadors of peace and solidarity.”

The Olympic Truce is a traditional part of the Olympic Games. It promotes the Olympic ideals of peace, friendship and international understanding. The Truce calls for a cessation of all hostilities during the Olympic Games and beyond, and is customarily accompanied by a United Nations Resolution to that effect. 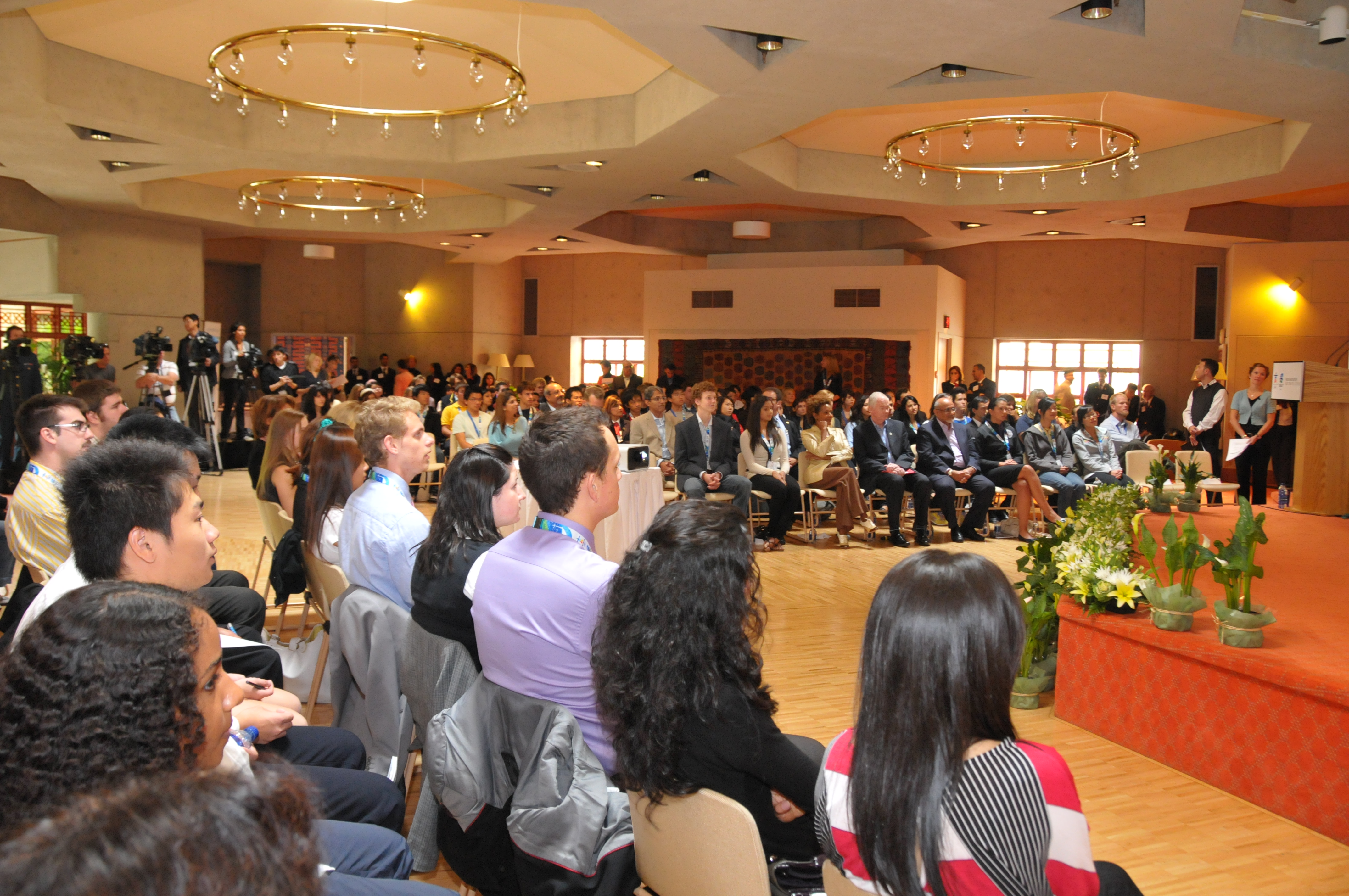 Some 200 BC youth participated in the Olympic Truce Dialogue at the Ismaili Centre, Burnaby. Aziz Ladha

The Ismaili Councils for Canada and British Columbia partnered with VANOC, the Vancouver Organizing Committee for the 2010 Olympic and Paralympic Winter Games, to host the Dialogue session with the Governor General. It was an opportunity to increase awareness of the Olympic Truce amongst the youth.

Approximately 200 British Columbians between the ages of 16 – 22 participated in the Truce Dialogue. They came from all across the province and represented a broad spectrum of demographic, ethnic, social and economic backgrounds. Also in attendance were a number of Olympic and Paralympic athletes.

Conceived in a mood of pluralistic harmony that is articulated in its Islamic architecture, the Ismaili Centre, Burnaby was an idyllic setting for the discussion. In welcoming the Governor General, VANOC, and the youth, Mohammed Manji, President of the Ismaili Council for Canada, expressed his happiness on behalf of the Ismaili community for the opportunity to host the Truce Dialogue. He noted that the values of Olympic Truce – humility, tolerance, pluralism, the creation of a peaceful and better world through sport, the spirit of volunteering one's time to help those less fortunate – are values that the Ismaili community lives by, and are cherished by all Canadians. 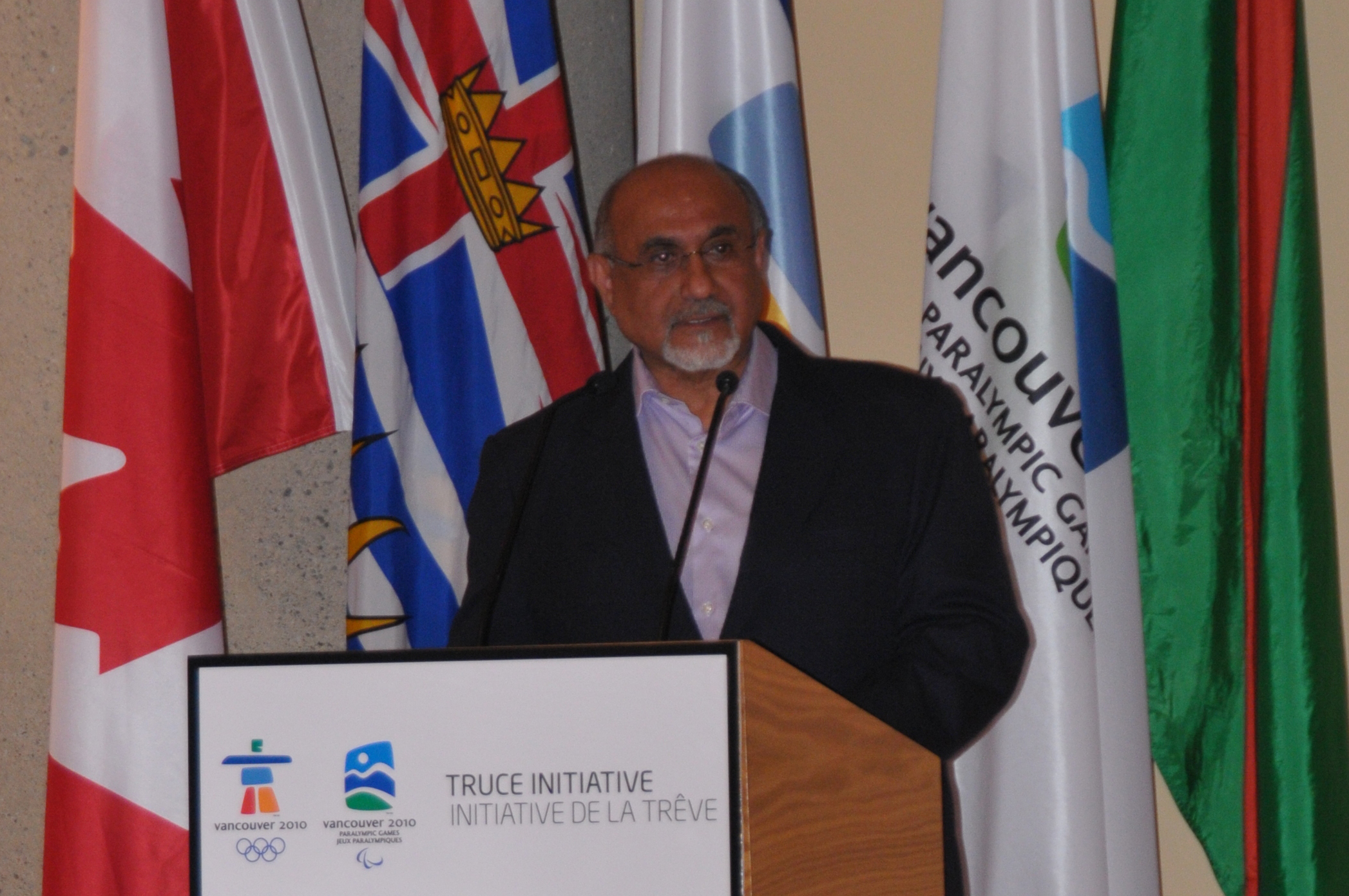 During the event, John Furlong, VANOC's Chief Executive Officer and member of the Board of the International Olympic Truce Foundation, announced that the Governor General would be the Truce Patron of the 2010 Olympic Games. Mr Furlong's inspiring message resonated with a call to draw out the best in humanity, which, as he indicated, is the heart and soul of the Olympic Games.

“We can be better; peace can prevail; our society can be enriched by this,” said Mr Furlong. He described a vision for the Games in which people would look back with heartfelt confidence, knowing that something good happened and that they had become better for it.

In her first address as Truce Patron, the Governor General expressed her pleasure in accepting the mission conferred upon her. She echoed the philosophic essence of the Olympic Truce – that sport can inspire peace. Sharing a global perspective of peace with the youth in the assembly, Her Excellency spoke about the hardship of those living in impoverished regions and war-torn nations of the world, and the work of Canadian forces and countless individuals with a firm commitment to bringing hope and restoring peace.

Following the Governor General's remarks, the youth were invited to participate in an open dialogue in the presence of Her Excellency, during which they were asked to share their aspirations for a more peaceful Canada, as well as their own contributions to create peace. Their perspectives were diverse, reflecting the uniqueness of their individual experiences. 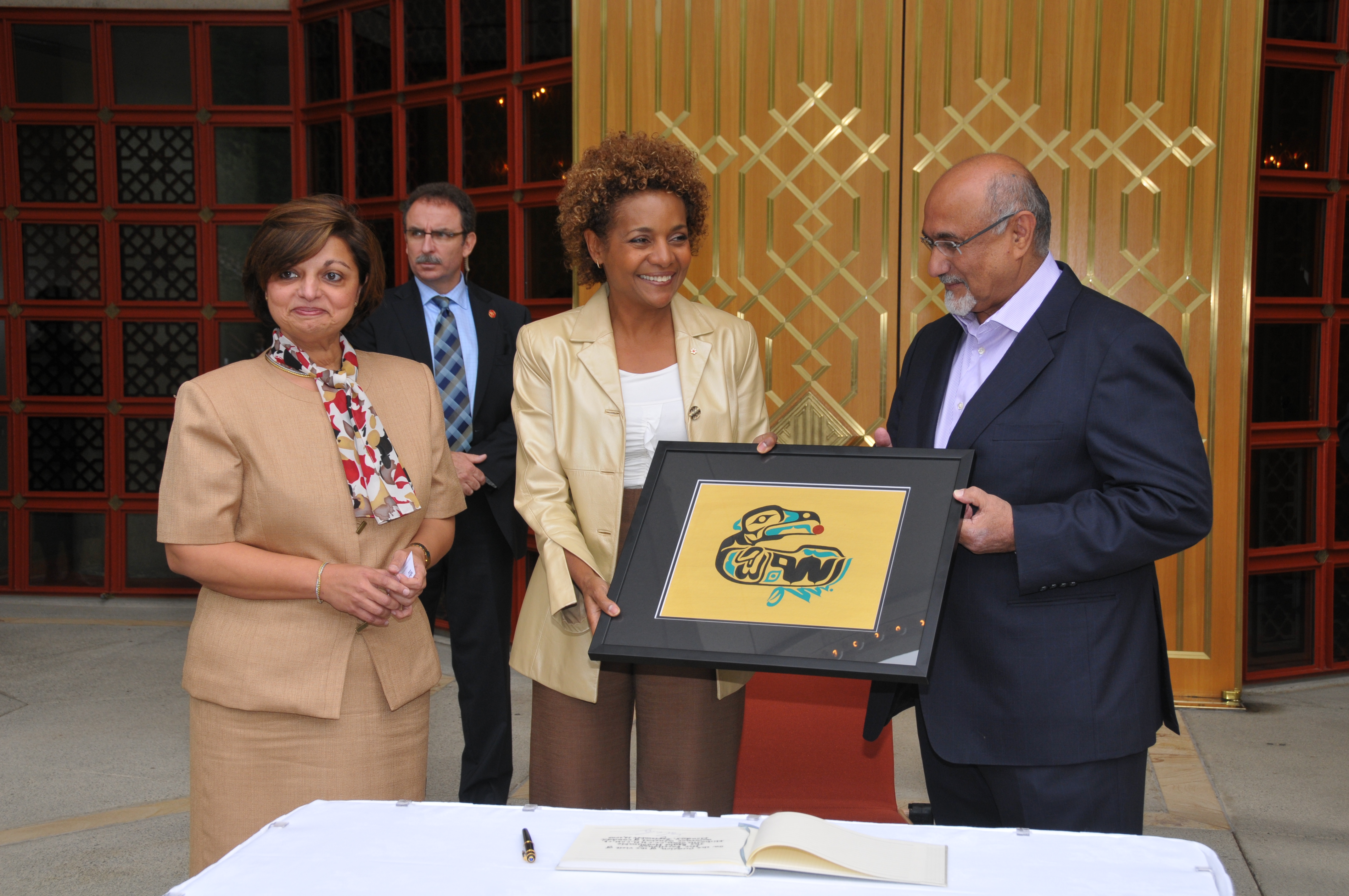 Presidents Mohamed Manji and Samira Alibhai, of the Ismaili Councils for Canada and British Columbia, present a gift – the Bismillah Raven by Sherazad Jamal – to the Governor General. The gift represents a multiplicity of expressions and the coming together of two cultures. Aziz Ladha

“We need to experience other cultures and contexts so we can understand one another,” said one participant, appealing for a strengthening of pluralism, while another called for an end to “man-made fear.” A third youth noted that “respect comes through learning,” citing the value of education in enhancing human relations.

Students shared examples of promoting peace in their own lives through involvement on school clubs, extracurricular volunteering efforts, and support for NGOs working in developing nations. While the Truce Dialogue provided a space for the youth to speak, it also allowed them to hear the sentiments of their fellows and exchange ideas on a shared vision for a peaceful future.

In her closing remarks, Her Excellency acknowledged the enthusiastic participation and picked up on the tendency for youth to think in terms of the future: “The youth can shape the future, but they also shape the present and are part of the solutions.” 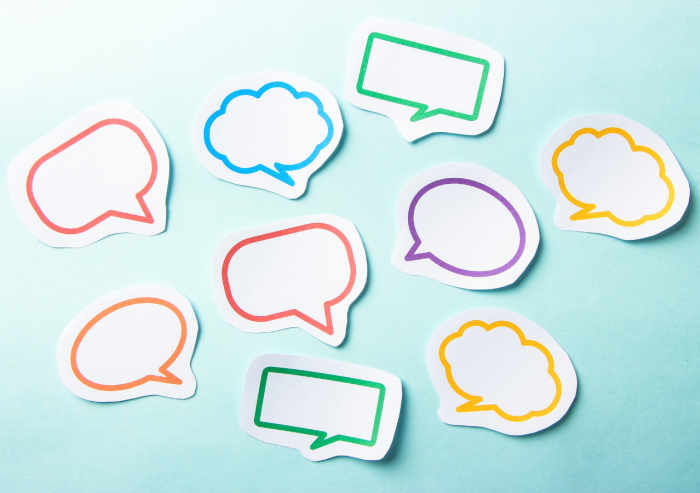