“It's exciting that Calgarians have endorsed my vision of the future of what this city could be,” Nenshi said, after being declared mayor-elect on Monday night. “I'm pretty elated.”

Election-watchers in Calgary and across the country gathered around television sets and twitter feeds to watch the results come in after polls closed Monday evening. At the beginning of the campaign, Nenshi had more or less been written off, and even one month ago trailed a distant third in the polls. But by election day, polls were predicting a virtual three-way tie between Nenshi and the two other front-runner candidates, long-time Alderman Ric McIver and former news anchor Barb Higgins. 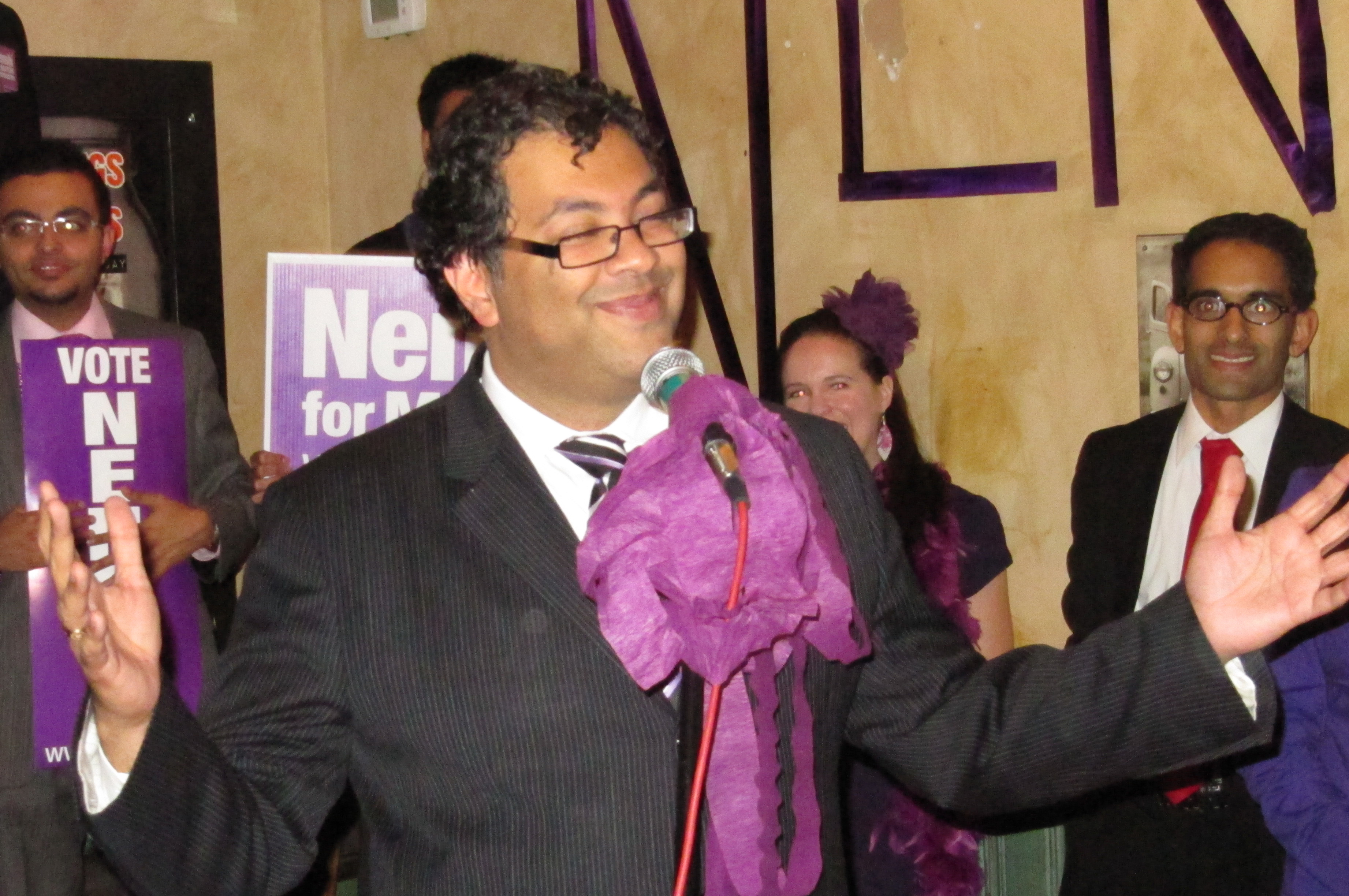 As electoral returns rolled in, Nenshi emerged as the clear leader. Third-place candidate Higgins conceded to him with just over half of the polls reporting, and by the end of the night, Nenshi had garnered 40 per cent of the vote, leading McIver by more than 27 000 votes.

“It's surreal at the moment,” said Arif Shivji, a friend and Nenshi supporter. “I've known Naheed for over 20 years. He has always had a love for civic politics and the city and the way cities work, and non-profit as far back as I can remember. Now he gets to do all of that.”

Overcoming voter apathy had been one of Nenshi's key goals, and with a record-setting 53 per cent voter turnout, he succeeded. In addition to employing traditional campaign strategies, like billboards, brochures, and a strong volunteer base, Nenshi had taken advantage of new media, social networking, and other internet campaign tools to spread his Better Ideas for a Better Calgary platform. The growing support for his candidacy was evident in the purple “TEAM NENSHI” t-shirts, buttons, and now infamous purple boas that began appearing all over the city. 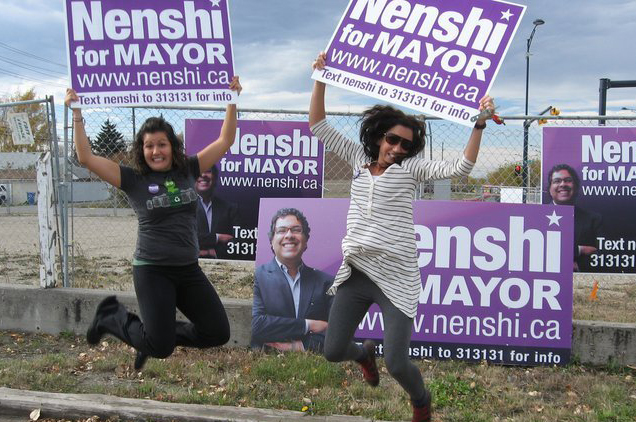 Nenshi's six-month mayoral campaign did not have any paid staff. It was powered by enthusiastic, energised and engaged volunteers. Courtesy of Naheed Nenshi

For Rahim Sajan, a campaign volunteer, it was a proud moment to be an Ismaili. He believes that the win will encourage more members of the community to get involved in local politics: “I know this is the first time I have ever personally been engaged in a municipal election. I' m so excited to be a part of it and to have the result that we did.”

Nenshi whose family roots are in East Africa, was born in Canada and grew up in Calgary. After obtaining a business degree from the University of Calgary, he went on to earn a Master's in Public Policy from the John F. Kennedy School of Government at Harvard University, where he studied as a Kennedy Fellow. He spent a number of years in cities around the world, first working for the international business consulting firm, McKinsey & Co, and later running his own consultancy. Eventually, Nenshi came back to Calgary, where he became Canada's first tenured professor in the field of nonprofit management, at Mount Royal University's Bissett School of Business.

As an Ismaili Muslim and a visible minority, Nenshi's campaign highlighted the importance of diversity in the democratic process and encouraged all Calgarians to vote – even if it wasn't for him. This approach touched demographics that do not typically get involved in the municipal political process, from youth to immigrants and other marginalised social groups. 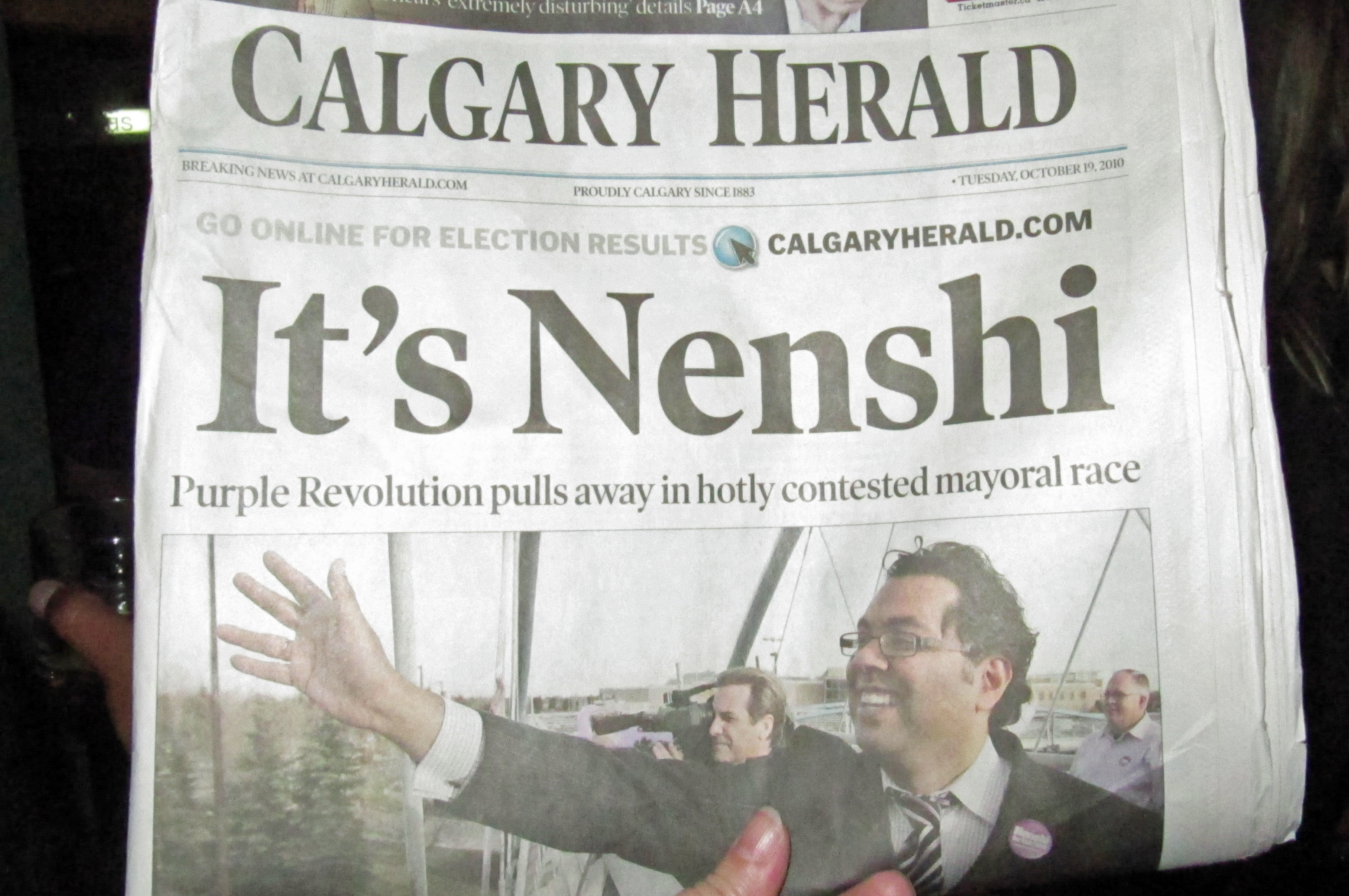 The Calgary Herald headline on 19 October 2010: “It's Nenshi”. Courtesy of Naheed Nenshi

“I grew up here in Calgary. I am all Calgary,” Nenshi said. “I haven't shied away from anything on the campaign trail, least of all my face, or the colour of my skin. All of that is part of who I am, along with my education, my experience, my background and my ideas.”

As Nenshi took the stage for his celebratory speech, he thanked his fellow candidates, his purple army of volunteers, and all Calgarians. “Today, Calgary is a different place than it was yesterday,” he said. “It's a better place.”