The Jubilee Games brings Ismaili Muslims from around the world together to celebrate excellence in sport. Learn more about the 2016 Jubilee Games and how you can get involved.

The 2016 Jubilee Games is an eight-day event to be held between 22 – 29 July in Dubai, United Arab Emirates that will bring Ismaili Muslims from around the world together to celebrate excellence in competitive sport.

The Jubilee Games is a permanent extension of the Golden Jubilee Games, which was developed as a Golden Jubilee International Programme commemorating 50 years of Mawlana Hazar Imam's Imamat. The inaugural Games was held in June 2008 in Nairobi, Kenya as an international celebration of sport and fitness that transcended cultural, social and language barriers. The 2008 Games brought together 1 200 Ismaili athletes from 28 countries and showcased the global Jamat’s athletic achievement.

The size and scope of the 2016 Jubilee Games are expected to be substantially larger. The 2016 Games is expected to draw 2 000 athletes, at least 1 000 volunteers, and several thousand local and international spectators. The Games includes 15 individual and team sports, opening and closing ceremonies featuring cultural performances that will showcase the talent of the international Jamat, and a Global Village with special programmes and exhibitions to educate, inspire and engage participants. Most sport and all non-sporting events will take place at the Dubai World Trade Centre, located in the centre of the city.

Using sports as a medium, the Jubilee Games aims to encourage the development of high performance athletes, the adoption of healthy and active lifestyles within the global Jamat, and seeks to unite the Jamat by showcasing its diverse cultural, social and linguistic traditions. The Jubilee Games is ultimately a catalyst from which positive attitudes towards physical fitness and healthy living are inspired, created and sustained within the global Ismaili community.

The 2016 Jubilee Games will be among the first programmes undertaken within a new formalised institutional structure for the promotion of sporting competition and physical fitness within the Jamat. The Games will develop an elite sporting culture and network that supports future Ismaili athletes and leaders. As part of this new institution, athletes, coaches and trainers will be able to contribute their expertise and knowledge within Jamati and AKDN institutions through service-related opportunities.

The Jubilee Games is a signature event in the global calendar of the Ismaili Muslim community that will take place every four years. 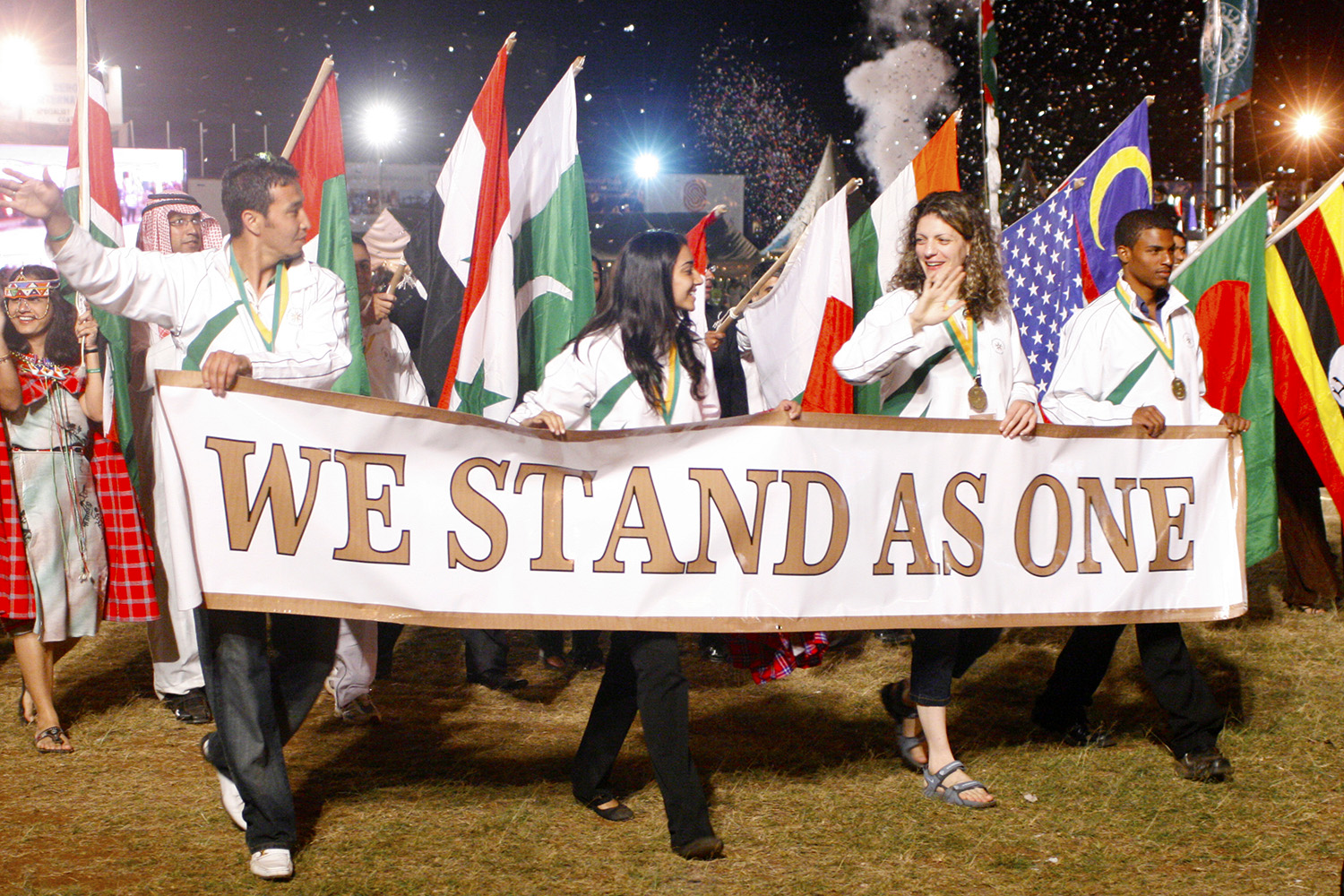 Celebrating diversity of cultures during the closing ceremonies at the 2008 Golden Jubilee Games.
JG