Forces of modernity are preventing a meaningful response to the environmental crisis in favor of economic interests, says Dr Seyyed Hossein Nasr. The renowned intellectual and pioneering environmental philosopher was delivering the inaugural Ismaili Centre International Lecture in Burnaby, Canada.

Burnaby, 26 April 2014 – “To be modern is to destroy the world of nature,” declared Dr Seyyed Hossein Nasr. “That's the great tragedy of it.”

Delivering the inaugural Ismaili Centre International Lecture at the Ismaili Centre, Burnaby, the renowned intellectual and pioneering environmental philosopher said that modern forces are preventing a meaningful response to the environmental crisis in favor of economic interests.

Also see:
» In the media: Islam and the Environment

“Nevertheless”, he asserted, “there is a gradual rise of awareness that if we do not come to understand our correct relationship with the world of nature, we are not going to be around to even talk about the future.”

A scholar on Islam who is recognised around the world and current University Professor of Islamic Studies at George Washington University in Washington DC, Dr Seyyed Hossein Nasr was introduced to the audience by Ali Lakhani, founder of the journal Sacred Web, who described him as a polymath and an intellectual giant.

After graduating from the Massachusetts Institute of Technology with an undergraduate degree in Physics and Mathematics, Dr Nasr went on to Harvard University where began his teaching career in 1955 while pursuing his doctorate in the History of Science and Philosophy. He was the first non-European and first Muslim to deliver the Gifford lectures at the University of Edinburgh and was inducted as the 28th honoree into the prestigious Library of Living Philosophers.

Lakhani recalled Dr Nasr's past role as the Aga Khan Professor of Islamic Studies at the American University in Beirut and his early involvement with the Aga Khan Award for Architecture, and remarked how fitting it was for the Ismaili Centre International Lectures to be inaugurated by such a close friend of the Ismaili community.

Dr Nasr framed his address with two overarching questions: What role does religion play, and what role does secularism have in the environmental crisis?

The gradual marginalisation of religion in Western civilisation, asserted Dr Nasr, is a root cause of the environmental crisis. He explained that the rise of the Scientific Revolution and the 1633 trial of Galileo Galilei before the Roman Inquisition saw a seminal divergence between observation and discovery in the world of nature and the sacred perspective.

“This was not the whole Christian historical tradition,” he said, “but the last 300 – 400 years were marked by religion in the West giving up the world of nature.” Stewardship over nature, he continued, was left in the hands of two forces: secular science divorced from the transcendent, and greed – driven to exploit resources without restraint.

Interestingly, secularism evolved in reverse to religion said Dr Nasr. While religion gradually drifted away from the environment, secularism came to become a defender of the environmental cause. After the Renaissance, an ambiance of secularism spread throughout the educational system, conditioning the teaching of philosophy, sociology, social and natural sciences among others disciplines. The secular view responded to the environment, but not because it affirmed a sacred quality in nature; rather, because the crisis had deteriorated to the point of threatening human life.

While the Islamic worldview was not challenged by similar secularist tendencies that affected the West, like the rest of the world it was “trying to catch up with the errors of the West.” Pollution was seen as a product of economic progress for which the West would undoubtedly also develop a solution. The Islamic world has been slow to wake to this crisis.

“Islam is not only for human beings,” said Dr Nasr. “It is a cosmic reality; all creatures participate in Islam.” The revival of such a philosophy is essential if we are to work towards a solution. The sacred reality of nature is affirmed throughout the Qur'an, and Dr Nasr suggested the environmental crisis as “both a proof of God's transcendence and a proof of the interconnectedness of all beings.” 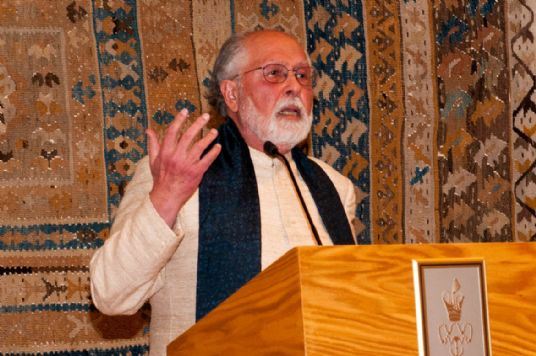 Seyyed Hossein Nasr delivers an Ismaili Centre International Lecture on “Religion, Secularism and the Challenge of the Environmental Crisis” at the Ismaili Centre, Burnaby on 26 April 2014. Sultan Baloo