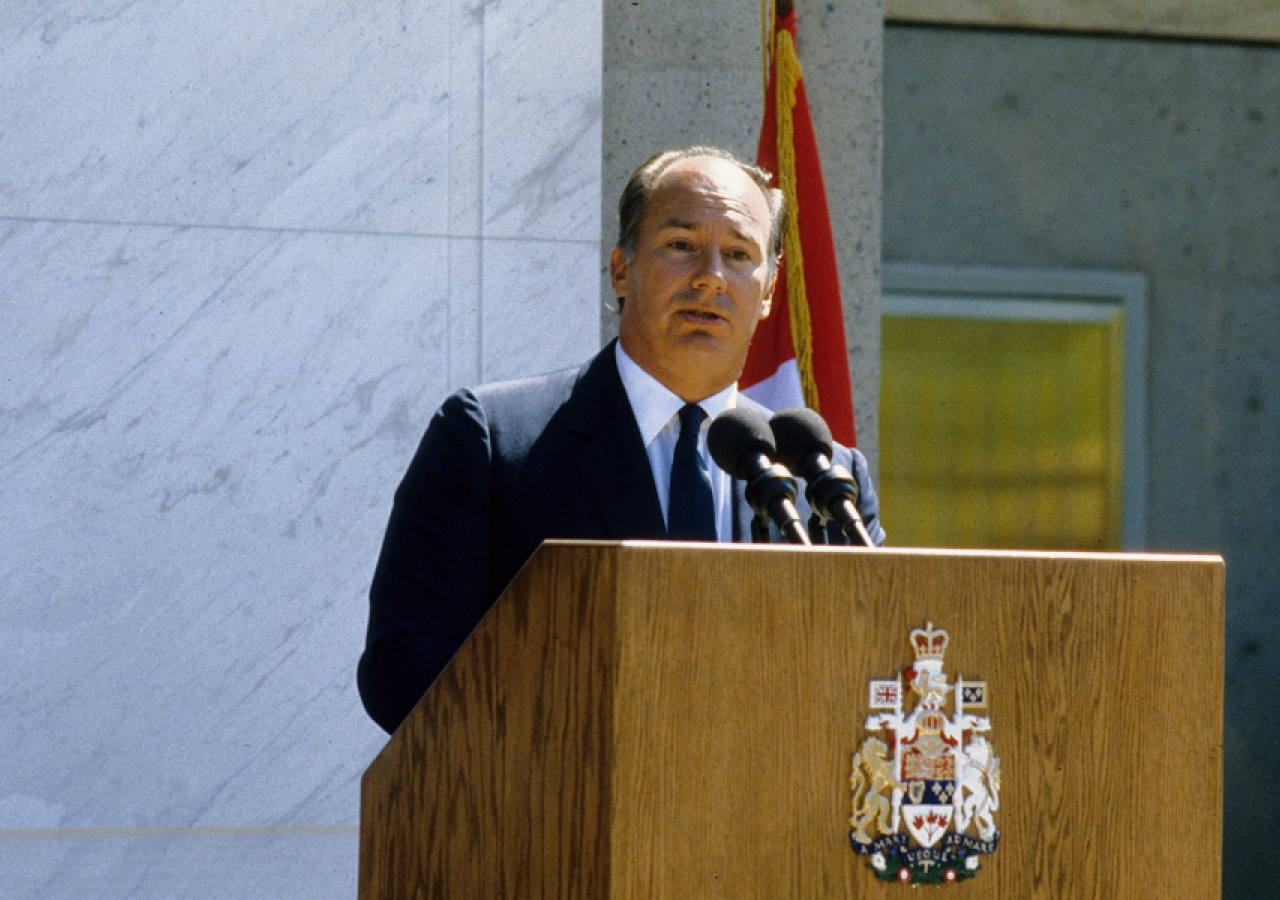 Speech at the Opening Ceremony of the Ismaili Centre, Burnaby

Speech by Mawlana Hazar Imam at the Opening Ceremony of the Ismaili Centre, Burnaby on Friday, 23 August 1985.

Three years and a month ago I had the honour of inviting the former Lieutenant Governor to lay the foundation stone of the building which we now see complete before us. Today it gives me the very greatest pleasure to welcome here the Prime Minister, Mr Mulroney, and to thank him for agreeing to perform the Opening Ceremony. We are also privileged to have so many members of the federal and provincial governments present for an occasion which is a truly historic one for the Ismaili community in North America.

In May this year, Mr Prime Minister, you addressed members of another, much longer established, immigrant community in Edmonton: namely the Ukrainians. One of their motivations for settling in Canada, you observed, “was the pursuit of freedom – freedom of thought, freedom of religion, freedom to own property, and freedom from arbitrary government.”

Such sentiments drew Ismailis here in their turn. The majority arrived in the early 1970s as a result of political disturbances in Africa. That they have been successful in putting down roots is substantially due to the warm hearted welcome they have been given by this great country, where the concept of multiculturalism has real and effective meaning.

It is not only freedom that Canada offers her new citizens. When immigrants arrive they are bound to be struck by this nation comprising a mosaic of different communities, often of widely differing ethnic origins. As they settle down they become aware of a further dimension of its diversity. Canada is not content simply to assist immigrants to establish themselves in her society at the lowest common denominator of what they can contribute, but positively encourages them to express whatever is most valuable in the cultures of their origin, and to be proud of it.

The Ismaili community has sought to create a building here which is both Islamic in its architectural inspiration and of a quality to enhance the overall distinction of Burnaby. The Jamatkhana is designed to be a social and cultural centre, as well as a place of congregation. It expresses the Ismailis' desire to give of their best to the cultural and economic fabric of Canada. They are proud that it symbolises their commitment both to this country's future and their ancient heritage. Nor is there any dichotomy in this dual aim. Muslims believe their faith is not for one time, but for all times and so there cannot be conflict between tradition and modernity.

Islam is the last of the world's great monotheistic faiths to be revealed and is essentially tolerant. It entertains no opposition to earlier beliefs. On the contrary it recognises them as being part of God's message to mankind. To all Muslims – Shia and Sunni alike – the “people of the book” are the people of all monotheistic faiths, and a wide, all-embracing, vision of the brotherhood of man and the unity of God is among the most fundamental of the faith's teaching.

Muslims are spread around the globe – basically in the Third World – from the hottest of deserts to the wettest of flood plains, to the coldest of the highest mountains. Their countries are of infinite variety and have been born from and have given birth to great civilisations. They come from numerous ethnic backgrounds and speak hundreds if not thousands of local languages. Yet all 800 million share the same faith.

I believe that like Canadians, Muslims can draw strength from their diversity but they certainly cannot be condemned if they sometimes fail.

Unfortunately the general public in the industrialised world sometimes accepts the facile and totally erroneous image that the Ummah is a monolithic block of believers, whose national disputes are part of their religion. Until the Iranian revolution the term “Shia” was little known in the West. In the absence of better understanding, Shi'ism has since been shown exclusively as the faith of that revolution and its ramifications. Yet in reality there are far more Shia Muslims outside Iran than there are within that country, including the Ismaili community here in Canada.

I feel it particularly important that the breadth and basic tolerance of our faith should be appreciated in areas where Muslims are minorities. If it is not, there is a great risk that pressure groups sheltering behind the façade of the faith, but whose real aims are perhaps more political, social or economic will be wrongly taken as expressing its nature.

Few Christians would regard the Inquisition in the past or the IRA today as being representative of Christian principles. Similarly contemporary pressure groups within the Islamic world are not necessarily characteristic of the central message of the faith.

I do not mean that the disputes and upheavals in certain Islamic countries, which so often dominate the headlines, should be disregarded, any more than such occurrences among other nations should be. The rest of the world needs to learn about their causes in order to help remove them and the threat they constitute to peace.

What I wish to stress is that they are not born of the essence of the faith nor does the silent majority of Muslims necessarily participate in, or approve of, the objectives behind them anymore than all Sikhs in India or Africans in Uganda support extreme forms of action.

Muslims living in the West can, and indeed must, contribute to improving the comprehension of what their faith does stand for, and to dispelling misconceptions which, both in the short and the long term, pose a serious threat to international understanding.

Here in Canada, happily, there is the necessary open-mindedness to achieve such comprehension. Furthermore, there is – if you will forgive my borrowing a phrase of yours, Mr Prime Minister – a tradition of constructive internationalism, typified by Canadian participation in so many United Nations peacekeeping operations.

As the distinguished members of government present here today know very well, it is one thing to talk about constructive attitudes and mutual understanding in the abstract: and quite another to put those ideals into effect.

In both your aid programmes, Sir, and your peacekeeping efforts, you have been concerned to invest in people, rather than in prestige projects and programmes. Canada has long appreciated what some donor nations are only just beginning to grasp, namely that the best way to build for the future is by helping people to help themselves.

The Aga Khan Foundation has enjoyed generous collaboration from both the Canadian International Development Agency and Alberta Aid in its aim of assisting educational, health and rural development programmes in the Third World. The Foundation's support is given on a completely non-communal basis, regardless of the race or religion of the beneficiaries.

Additionally Canadian universities have [given] notable help to the Aga Khan University and its Faculty of Health Sciences in Karachi, Pakistan. Over the past three years, 165 nurses have been trained under the guidance of McMaster University, and future teachers have come to Canada for graduate courses. At the same time the conceptualisation of the University Hospital's primary health care programme has been achieved with the aid of McGill University.

I mention these examples because although such cooperation attracts little publicity, it gives the Third World practical access to the technological expertise and management experience of the West. Human resources are the Third World's greatest potential asset and developing them is the real lifeblood of international aid.

In the future, I hope that the Ismaili community in Canada, having established the permanency of its home here, will become part of the reservoir of human talent on which this country can draw, both nationally and internationally.

Its members will be men and women who believe in enterprise and freedom, who are inspired by this country's respect for the individual, who will work to build the strength of Canada's economy and democratic institutions. Their spirit will be Canadian. Yet from their origin they will derive an understanding of other countries which can be harnessed to the benefit of that special perspective on international relations which has earned Canada such worldwide respect. They will be well qualified to respond to the commitment to the Third World development which you, Sir, made at the recent summit conference of Western leaders in Bonn.

Mr Prime Minister, it is my privilege to ask you to declare open this building, which symbolises the Ismaili Community's confidence in its future as an integral part of the nation you lead.