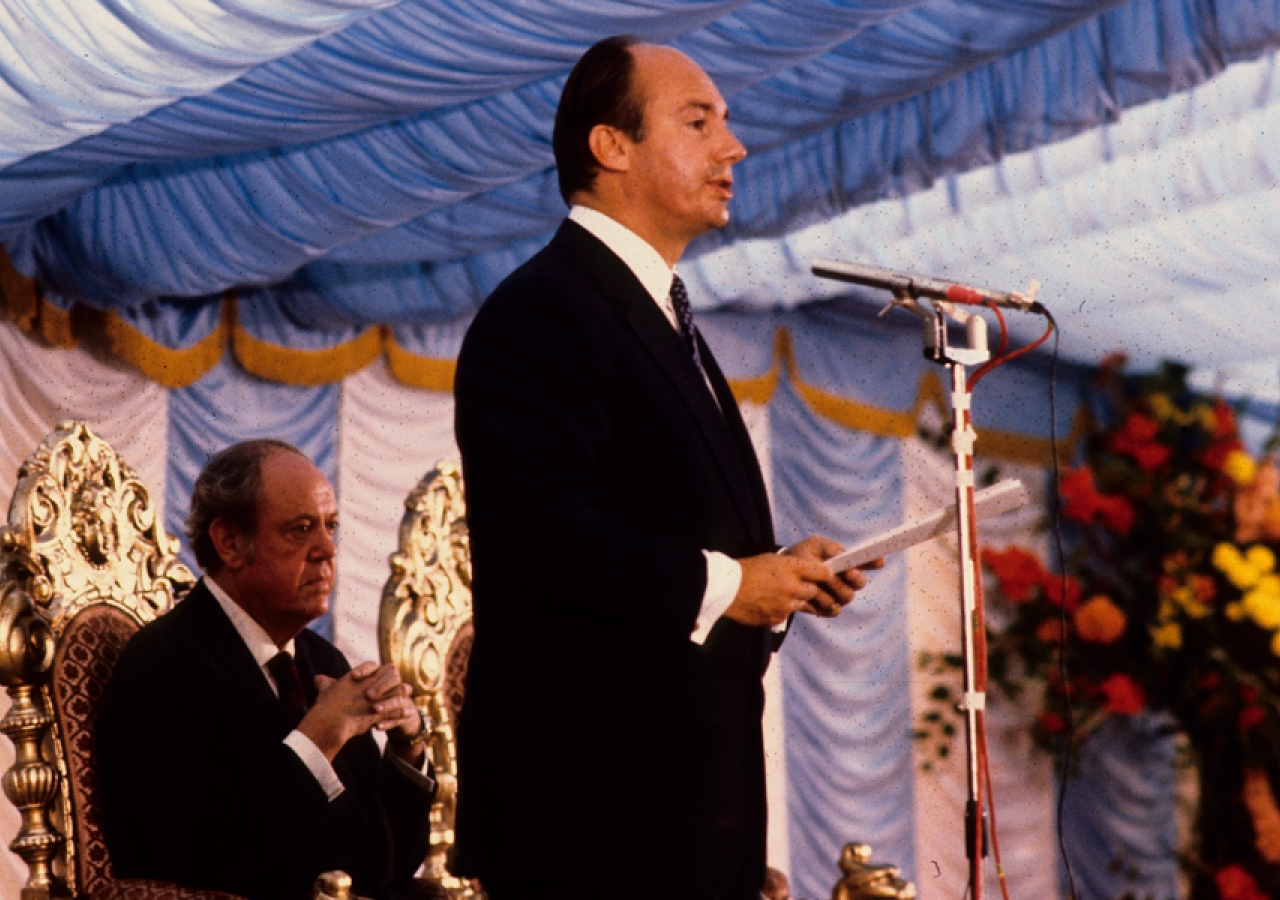 Speech by Mawlana Hazar Imam at the Foundation Ceremony of the Ismaili Centre, London

I am particularly happy to welcome our distinguished guests this morning and to thank them for their presence on this occasion which is one of special significance to members of my community. Your presence is to me a symbol of the friendship which the different countries and institutions you represent have shown to Ismailis all over the world, to my family and to me personally.

It gives me deep satisfaction to be here today at the Foundation Ceremony for the new Ismaili Centre in London. Not only do I welcome most warmly the creation of this important focus for the religious and social life of the community, but I also appreciate the strengthening of the traditional ties with Britain which it represents. For while there is a substantial number of Ismailis permanently resident in the United Kingdom, many more come to London from all over the world, and particularly the Commonwealth, to renew old bonds of friendship, language and culture dating from numerous and close associations in the past.

The Ismailis are grateful to the British people for their understanding, especially at the time when so many of them arrived as refugees after their expulsion by ex-President Amin from Uganda not so long ago. Ismailis are proud of their reputation for industry and self-help which I think is correct; but none of their achievements, including the new Centre which we shall soon see rising from this ground, would have been possible without the faith and cooperation of their neighbours.

In this connection, I should like particularly to thank the Greater London Council for all their care and patience in helping us to acquire this site. I am also grateful to the Royal Borough of Kensington and Chelsea, the Royal Commission for the Exhibition of 1851 and the local amenity groups for making it possible to construct a building here which, by its nature and location, must seek to bridge the cultures of East and West.

In drawing up their plans, the architects faced a new and unusual challenge as this Centre must serve the requirements of the Ismaili community as well as to establish a presence worthy of its proximity to the distinguished public and historic buildings which surround us. The mass and silhouette of the new structure are therefore strong and simple and in no way attempt to compete nor interfere with, the varied and imposing façades of the neighbouring buildings. The Ismaili Centre, being designed for a Muslim community, must reflect, even if only discretely, an Islamic mood whilst being sympathetic to the character of its surroundings. In this endeavour, I have been patiently and constantly helped by the architects and other participants who are too numerous to name individually. To all of them, I express my deepest thanks for the imagination and sheer hard work with which they addressed a singularly unusual commission.

The building will rise three stories and the second floor will be a large hall for prayer. The remaining floors will accommodate a library and reading room, areas for education, social rooms and a roof garden. There will also be space available for a public art exhibition gallery and for use by the institutions of the Ismaili community in the United Kingdom.

It is my conviction that the building of this Centre is symbolic of a growing understanding of Islam. For some centuries past, the Muslim world has lived in shadow as far as the West was concerned. Muslim civilisation and society were poorly understood, or not understood at all. Apart from a few exceptional and dedicated men, there was no communications and almost no desire to be informed. Now we see that conditions have changed. This building and the prominence of the place it has been given indicate the seriousness and the respect the West is beginning, to accord Muslim civilisation, of which the Ismaili community, though relatively small, is fully representative. May this understanding, so important for the future of the world, progress and flourish.

I sincerely believe that when this Centre is completed, it will be, both by its presence and the function it fulfils, an important addition to the institutions of London, a source of pride to all who took part in its creation, and a pledge and token of understanding between East and West.

Few men alive today have done so much in breaking down historic and traditional national barriers and replacing them by common objectives in the hope of a better future than Lord Soames. He is not only a very close family friend but his achievements as a statesman bring to this ceremony today its special significance.

His outstanding contribution to Britain's entry into the European Common Market is known to all, but that would never have been possible had he and those who worked with him, not also convinced the Commonwealth Nations, particularly those of the developing world, that such a partnership would eventually be as much in their interests as of Europe's and of Britain herself. It is as a highly creative internationalist, and in the best and broadest sense, a Man of the World, that I welcome Lord Soames today, and request him to perform this Foundation Ceremony.