Skip to main content
Home > About Us > Speeches > node 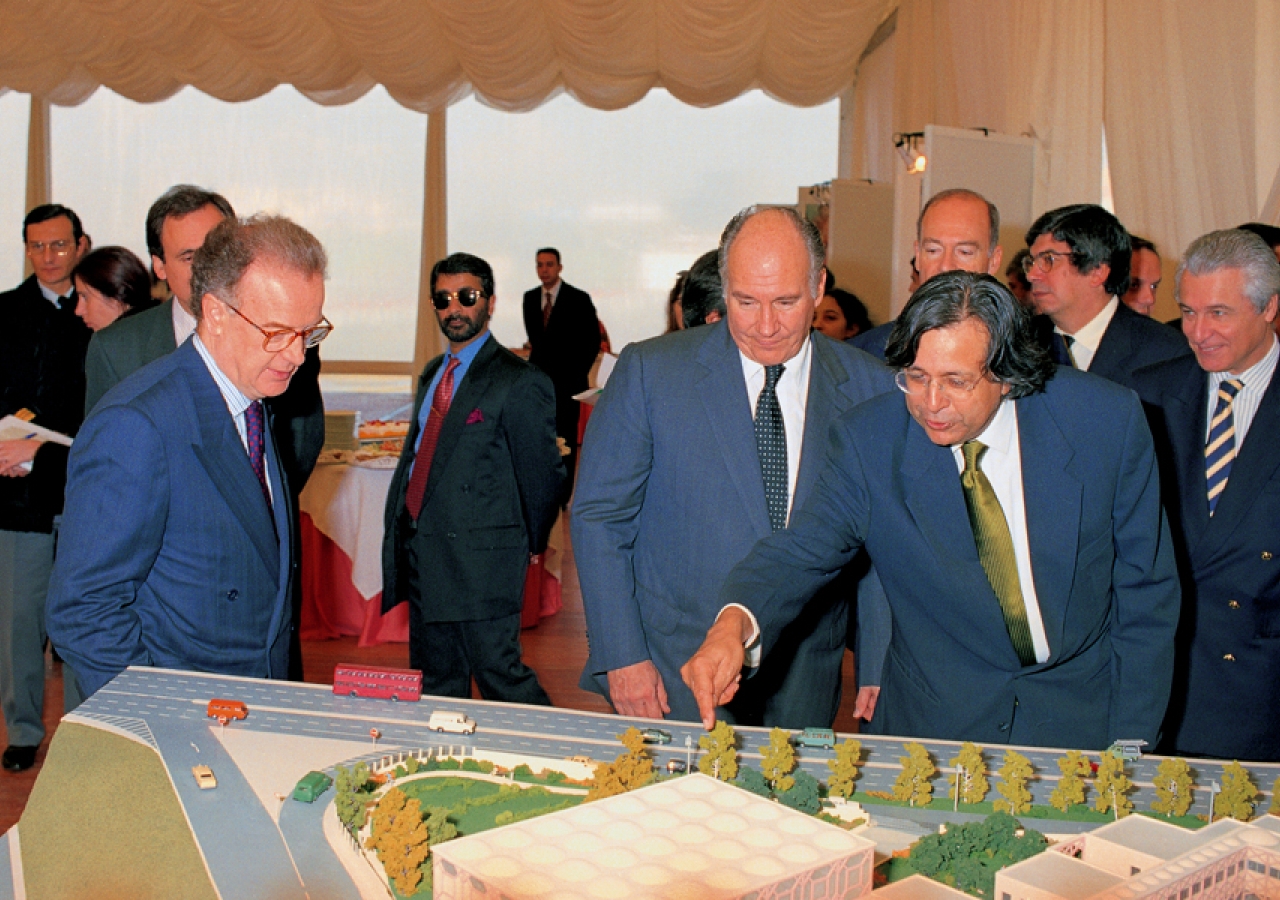 Speech at the Foundation Ceremony of the Ismaili Centre, Lisbon

Speech by Mawlana Hazar Imam at the Foundation Stone Ceremony of the Ismaili Centre, Lisbon on Wednesday, 18 December 1996.

We are all, Mr President, deeply honoured by your presence here today at an occasion that is significant, as it is historic for Ismaili Muslims worldwide and for myself. Today's ceremony has a very special meaning for us, because it marks much more than the foundation of a place of gathering for the community. Dedicated to the preservation of spiritual values, the promotion of social development and the enhancement of intellectual discovery, the Centro Ismaili, will seek to contribute to the enjoyment by citizens of Lisbon, and visitors alike, of spaces and buildings whose inspiration will aim to empathise, as well as expand our cultural horizons.

The space that the Centre will create in the midst of this historic city will, I hope, serve as a bridge linking and enriching various cultures of Europe with others of Africa and Asia, as it draws upon associations both from within and outside the Portuguese-speaking world. In so doing, the Centro Ismaili will, thus, follow the long tradition of Portuguese seafarers, who set off from this very port of Lisbon to those, then improbably distant lands, and who eventually succeeded in shortening distances between continents and peoples.

I speak on behalf of all Ismailis, and on my own behalf, when I say how deeply grateful we are to Portugal and its people, and to you, Mr President, as well as to the generous donors who made this site available and the launch of this project possible. We express our gratitude not only for your help with the project, but for the open and cooperative way in which this country has always assisted the Ismaili community in its endeavours, promoted its progress, and reinforced and facilitated the realisation of its hopes and aspirations. Few nations have shown so much integrity and sincerity in making transplanted populations feel at home at the very time when they left their homes behind. We thank Portugal for her help, both concrete and moral, for the way in which the Ismaili community, which came, for the most part, from Mozambique, but also from other parts of Portuguese-speaking Africa, has been caringly and open-mindedly welcomed. It is our hope that through the quality and design of the buildings to be built here, through their programmes to better this great city for everyone, will stand a tangible and lasting symbol of our friendship and commitment.

The Ismaili Centre in Lisbon will bring to Portugal's capital city new buildings and open landscaped spaces which aspire to be unique in quality and design, which will hopefully carry with them also a certain prestige. The city of Lisbon is a metropolis comprised of Portugal's Government, numerous communities, public and private institutions – all of which have many international links. And of course, Lisbon has long been a world centre of culture, and an integral part of human history. Lisbon is also the epicentre of PALOPS, and a link to the many Portuguese-speaking nations around the globe. We hope the Ismaili Centre, and its activities and programmes developed here by various components of the Aga Khan Development Network, will succeed in presenting the Ismaili community of Portugal and the world community, as a community and an interpretation of Islam which are intellectually strong and humanistic in outlook. We hope that this initiative will reflect a community living in Portugal which, through its Centre and activities, will share its strong social conscience with the widest spectrum of people and faiths in Lisbon and further abroad.

Although Ismailis have lived in the West since the late 1950s, only two other Ismaili Centres of this importance and magnitude have been built in the Occident to reach these goals. Through lectures, presentations, conferences, recitals, and exhibits of art and architecture, alone, or joined by other national or international entities in the cultural field, these Centres have become ambassadorial buildings which today reflect and illustrate much of what the Shia Ismaili community represents in terms of its attitude towards the Muslim faith, its organisation, its discipline, its social conscience, the effectiveness of its community organisations and, more generally, its attitude toward modern life and the society in which it exists. This Centre in Lisbon, like its predecessors in the West, will strive to be not only a place of gathering for prayer, but a space for articulation of thought and positive impact on the wider community.

If it is successful in achieving these goals after its opening, it will have a significant influence on a large number of Portuguese opinion-makers in various walks of life, who will, through one initiative or another of the Centre, positively recognise both the Centre itself and the Ismaili community. And it is for these reasons, that this site and the buildings that will come upon it, will be the fruit of contributions not only of the Ismailis of Portugal, but also of many other countries.

But if this new Centre in Lisbon may have some aspects which are common to its two Western predecessors and may perhaps even take advantage of their experience in its operation, it differs from them significantly, for the site on which we stand today is much larger than those. This Ismaili Centre will be comprised of a small complex of buildings, and a large area of open, well-landscaped, public space which will bring to a Western capital city some of the unique design traditions found in so many famous and outstanding outdoor places in the Muslim world. Having said this, Lisbon, Portugal, and Portuguese culture are already intimately familiar with Muslim culture, and have been for a millennium. We see the mark of Islamic tradition in many realms of Portuguese culture: in its architecture, in its language, in its music, so that this Centre should never seem alien or out-of-place in Lisbon. It will be public in the sense that members of the community will use the site to walk in, converse in, and enjoy, and when it is being used by the non-Ismaili community of Lisbon, they will also be invited to enjoy the site. In other words, the Ismaili Centre in Lisbon will be able to envisage activities which could not be accommodated at either of the other Ismaili Centres in the West.

Finally, on this important day of building for harmony and humanism, it is appropriate to remind ourselves that this Ismaili Centre will house the headquarters of the Aga Khan Foundation Portugal, and so, beyond enhancing understanding and promoting pluralism, it will also be poised to accomplish some very important and concrete results. The Aga Khan Foundation Portugal will seek out collaborators based in Portugal for programmes here and development abroad. Many competent non-governmental organisations operate out of Portugal, working to improve the quality of life in the Third World. And in these endeavours, the Aga Khan Development Network can be an effective and useful partner, having its own considerable experience in Third World development, and many ties to countries within the Third World. I would like to cite the example of Mozambique as a nation which is Portuguese speaking, part of PALOPS, and in which the Aga Khan Development Network will surely operate in the future.

Any collaboration between Portugal and the Aga Khan Foundation for the development and improvement of poorer nations will be facilitated by the Ismaili Centre, which will soon stand where we have gathered today. It will thus be a useful partner to Portugal in the very concrete task of improving conditions outside the frontiers of Portugal and of Europe.

It is my deep hope that this will be a Centre of goodwill, and of learning, of experience to be shared open-handedly, a place uplifting in the beauty of its design, a place for Portuguese Ismailis, of course, to meet and practice their faith, and we hope, a lasting token of our commitment to a long and fruitful relationship with Portugal.