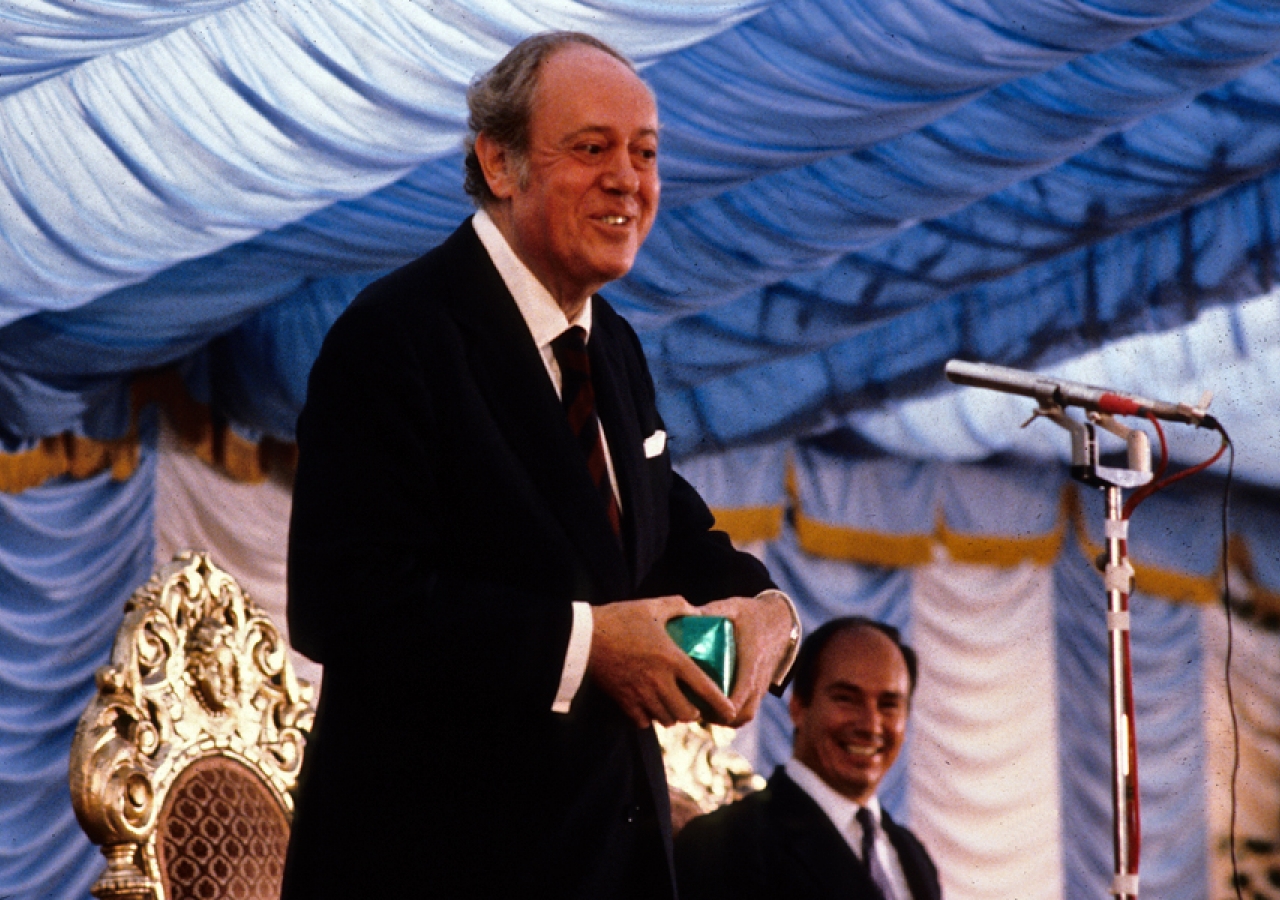 Speech by The Lord Soames at the Foundation Ceremony of the Ismaili Centre, London

The Lord Soames, Lord President of the Council, addressing the guests at the Foundation Ceremony of the Ismaili Centre, London. Julian Calder
Location
London, UK

Your Highnesses, Your Excellencies, My Lord Mayors, My Lords,

There are many reasons why I feel both grateful and honoured to have been invited by Your Highness to perform this ceremony. Firstly, because it is to unveil the corner-stone of a building which will be of considerable significance physically, spiritually and symbolically. Architecturally, it is designed both to reflect the aspirations of the Ismaili people and to fit harmoniously into its immediate environment, providing a new additional dimension to the existing public buildings of varying periods. To the baroque Roman flourish of the Oratory, to the late-flowering of Edwardian confidence and sense of stability reflected in the Victoria and Albert Museum, to the Venetian Gothic dress of the National History Museum – will now be added a building of another architectural order of an Islamic mood, which will remind Londoners that not all architecture sprang from Greek or Italian roots, which will be proud to reflect the culture and character of those who will meet in it, and proud to be of its own time.

The second reason why I believe we should rejoice at the imaginative concept of this building is that it will fill a real need. Circumstances have ordained that there has been a notable increase in recent years in the number of Ismailis who have come to make their homes in Western Europe in general and in the United Kingdom in particular. Wherever they have settled, the Ismailis have made themselves most welcome – indeed in many ways and in many instances they have set an example. They have traditions which have been handed down over centuries – and to which they have firmly clung in all the many countries and continents in which they have lived their lives and which I believe are as strong today as they have ever been – their deep religious beliefs, their traditions of hard work, of tolerance, of self-help, of mutual help, of a highly developed sense of responsibility not only in respect of themselves and their families, but to others who share their belief and their ideals. And above all, perhaps, a firmly implanted and unshakable belief that nothing comes from nothing – that what counts is what you put into life – into your own and that of others, and that what you get from it is but a spin-off of what you have contributed. The Ismailis are essentially contributors who seek to enrich the social structure in which they live, and those of them who fall by the wayside are picked up, helped and if need be cherished by their own. The impression I have is that these traditions and disciplines are as strong today as they were through the centuries that have been spanned by Your Highness' 48 predecessors as Imam – and that this is not disconnected with the fact that the wealth is available today for this new building on this prime site in London as it has been to create schools, hospitals and other imaginative schemes in those countries in other continents with a high Ismaili population.

The Centre, of which this is to be the corner-stone will fill a long-felt need by the 25 000 or so Ismaili people in this country, those of their friends and relations who come to visit them from [abroad]. For it will provide both a place of prayer and devotion and also a meeting place with many facilities of a pleasurable kind.

My third – and last – reason for pleasure in performing this important yet intimate ceremony today is of a personal character. It was Your Highness who invited me. Your father was a valued friend particularly when we were in the Middle East together during the war – believe it or not we even used to ride races together when on leave in Cairo. Your mother has been a loyal, generous and devoted friend of mine and my wife's for more years than any of us would care to remember. And then Your Highness and the Begum, we have been glad to count among our friends – and we have enjoyed many moments together. What stands out particularly in my mind and memory is when fortuitously we met in Karachi some years ago. I was there on political business and you were paying one of your regular visits to your people in Pakistan. I was privileged to attend, as your guest, the ceremony your people provided at the airport on your departure. You made a speech the sense of which I still have in my mind. In bidding them farewell on behalf of yourself and the Begum you praised them for the work they had done, but you exhorted them not to be satisfied – there was a lot yet to be accomplished and you told them what you expected to see on your next visit. The impression I got was that the more you asked of them the happier they were – and I saw for myself the respect and devotion which Your Highness' followers felt for this Imam as they have for those who have gone before.

It all adds up to a great tradition – to which it is the hope of all of us that this building will make its due contribution in the years to come.