Speech at the Foundation Ceremony of the Ismaili Centre, Toronto, the Aga Khan Museum and their Park

Speech by Mawlana Hazar Imam at the Foundation Ceremony of the Ismaili Centre, Toronto, the Aga Khan Museum and their Park on Friday, 28 May 2010. 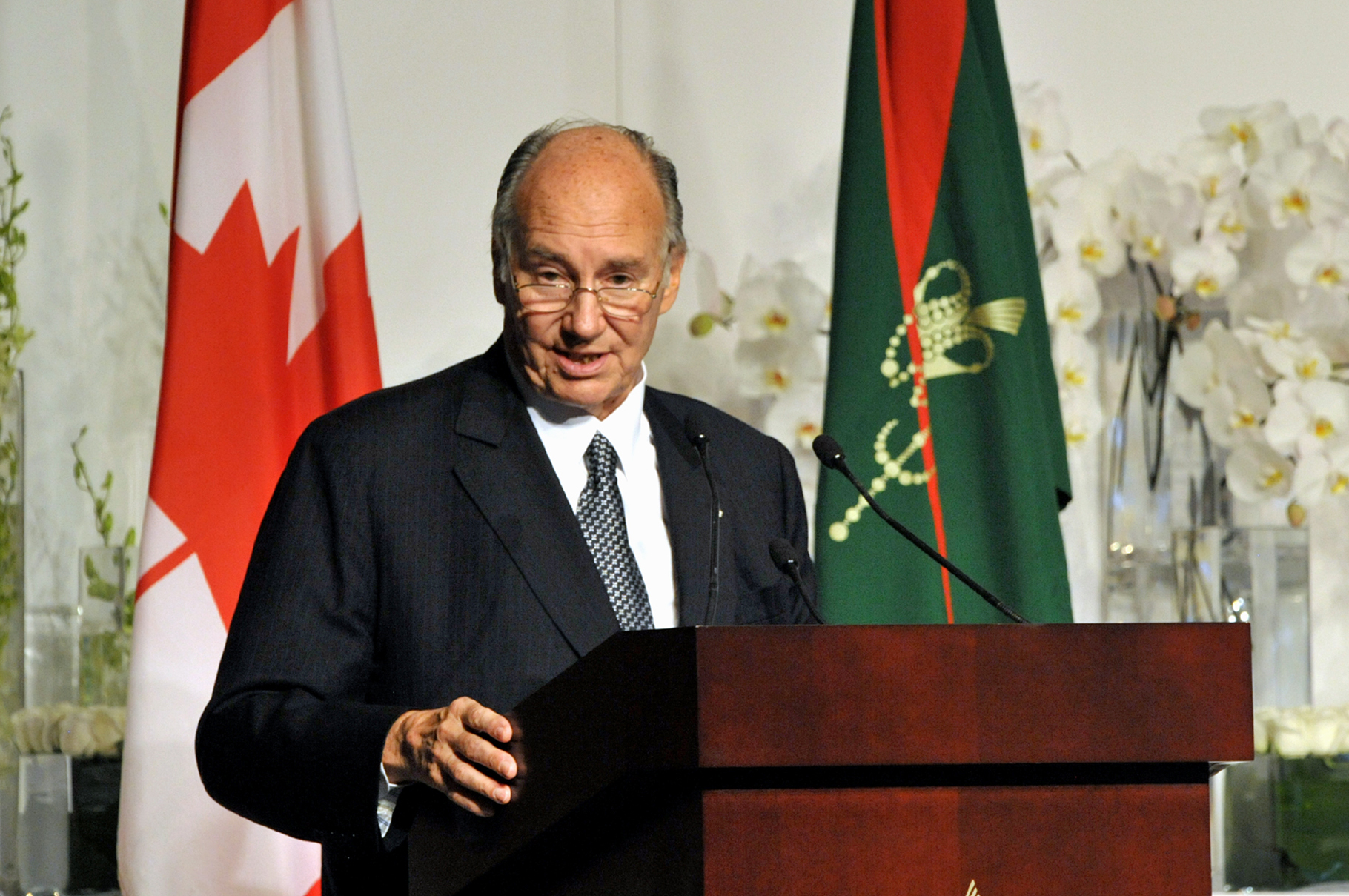 Mawlana Hazar Imam addresses the gathering at the Foundation of the Ismaili Centre, the Aga Khan Museum and their Park in Toronto. Photo: Zahur Ramji

Let me begin by expressing my profound appreciation for the great honour which this country has paid to me today by extending this generous gift of Honorary Canadian Citizenship.

I have been deeply moved by your gracious gesture – which I also regard as a tribute to the institution of the Ismaili Imamat, which I represent. It is a significant recognition of the values which our community of faith shares with the people of Canada.

Mr Prime Minister, I have always felt very much at home in Canada, but never more so than at this moment.

It also means a great deal to me that all of you can be here today. This Foundation Ceremony marks a particularly important moment for my family and me – and such moments take on added meaning when they can be shared with colleagues and friends, and with so many men and women whom I deeply admire.

The projects we celebrate have been in the development process, as you may know, for some time – and perhaps, if I may say so, for a somewhat longer time than some of us may have expected! But I have learned that sometimes a bit of extra patience in the planning process can lead to even wider opportunities – and that is precisely what happened in this case.

Our original plans were to build here a new Ismaili Jamatkhana, a space of prayer, contemplation and community interaction. But as time went along and added space became available, the concept grew. It now includes three elements: a new Ismaili Centre – the sixth such representational building in the world; a new Aga Khan Museum; and a beautiful, welcoming Park, which will link these two new buildings.

Together, these three projects will symbolise the harmonious integration of the spiritual, the artistic and the natural worlds – in keeping with the holistic ideal which is an intimate part of Islamic tradition. At the same time they will also express a profound commitment to inter-cultural engagement, and international cooperation.

Our gathering this afternoon signifies the emergence of these projects from the planning stage into the building stage – from the realm of creative imagination into the realm of tangible construction.

This creative process has itself been a remarkable international story – bringing together the designs of architects from Japan, India and Lebanon, working with the Toronto firm of Moriyama and Teshima, and adapting age-old architectural traditions in a contemporary Canadian idiom. We look forward to the full realisation of their aspirations.

But even as we look ahead, it is only right that we look also to the past, including of course, the story of Canada's historic welcome to displaced Ismailis in the 1970s and later, and to their successful integration. Certainly this process, and the contributions Ismailis have made in so many walks of life, have also reflected the encouragement they received to rebuild here, their traditional institutions and social structures.

In looking back over these recent decades, I also think of the close cooperation which the Aga Khan Development Network has enjoyed with Canadian institutions such as CIDA – the Canadian International Development Agency – which continues to be a key partner in addressing needs in the developing world.

We appreciate, too, the strong relationships our educational institutions enjoy with great Canadian centres of learning – including McMaster and McGill Universities, the University of Toronto and the University of Alberta.

We are also proud of the partnering with the Canadian Government in the development of the Global Centre for Pluralism, based in Ottawa, which will express our shared conviction that the progress of civilisation depends on our ability to understand, embrace and energise the power of human diversity.

You can see the strong base of cooperative endeavour from which this Wynford Drive project has emerged, inspired as well by Toronto's own success as a vibrant cultural centre.

Let me discuss briefly each of the three project elements, beginning with the Aga Khan Museum.

As our plans began to take shape, we came to realise that the Museum's focus on the arts of Islam will make it a unique institution in North America, contributing to a better understanding of Islamic civilisations – and especially of the plurality within Islam and of Islam's relationship to other traditions. It will be a place for sharing a story, through art and artefacts, of highly diverse achievements – going back over 1 400 years. It will honour the central place within Islam of the search for knowledge and beauty. And it will illuminate the inspiration which Muslim artists have drawn from faith, and from a diverse array of epics, from human stories of separation and loss, of love and joy – themes which we know reverberate eloquently across the diverse cultures of humanity.

In a world in which some speak of a growing clash of civilisations, we believe the Museum will help address what is not so much a clash of civilisations, as it is a clash of ignorances. The new Museum will have a strong educational vocation: it will be a place for active inquiry, for discussion and research, for lectures and seminars, and for an array of collaborative programs with educational institutions and with other museums.

A major part of the gallery space will be dedicated to visiting and temporary exhibitions – building on exhibitions of our collection that have taken place in London, Paris, Lisbon and Berlin – and are now planned for St Petersburg, Doha, Istanbul and Los Angeles. A state-of-the-art auditorium will also host programs featuring the performing arts and cinema.

My own family has been intimately involved in Islamic cultural history, notably during the Fatimid Caliphate which, a thousand years ago, founded one of the world's first, great universities in Cairo. The core collection of the new Museum in Toronto includes elements that have been gathered by my family through many generations, including the miniatures collected by my uncle, the late Prince Sadruddin Aga Khan, which will be displayed in a replica of the Bellerive room from my late uncle's home in Geneva. We are deeply grateful to Princess Catherine for this generous gift.

I should emphasise, as well, that the Museum building itself will be an important work of art – designed by the great Japanese architect Fumihiko Maki. Many of you know his superb building in Ottawa that has been the home for the Delegation of the Ismaili Imamat since 2008.

That Delegation building was inspired by the evanescent mysteries of rock crystal. The new Toronto Museum will take as its theme the concept of light – suffusing the building from a central courtyard, through patterned glass screens. From the outside, it will glow by day and by night, lit by the sun and the moon. This use of light speaks to us of the Divine Light of the Creator, reflected in the glow of individual human inspiration and vibrant, transparent community.

The Museum in Toronto will belong to the institutional framework of the Aga Khan Trust for Culture, already the sponsor of projects for restoring and preserving cultural heritage in places such as Syria, India, Pakistan, and parts of Central Asia, as well as museums in Egypt, Zanzibar and Chantilly in France.

Like the Museum, the Ismaili Centre will also be part of a supportive global network – a group of Centres that now includes Vancouver, London, Lisbon, Dubai and Dushanbe – and with new Centres planned in Houston, Los Angeles and Paris. The focal point of the Toronto Centre will be a circular prayer hall, dedicated to spiritual reflection, while other spaces will provide for deeper engagement with the broader community among whom Ismailis live.

The Centre has been designed by Charles Correa, the award-winning architect based in Mumbai. The building will feature a crystalline frosted glass dome – standing like a great beacon on top of a building that is itself at the highest point of the site – and illuminating the Prayer Hall and its Qibla wall.

What about the Park?

The Park will comprise some 75 000 square metres – and what an impressive site it will be! It was designed by Vladimir Djurovic, a Lebanon- based artist, who was selected for this role following an international competition.

His design draws upon the concept of the traditional Islamic garden, and especially the gardens of the Alhambra, which flourished during the great era of Spanish history when Muslims, Jews and Christians lived together in creative harmony.

The Park will combine quiet spaces with lively ones, open areas with more defined shapes, formality with informality, the traditional with the contemporary. It will be part of a series of parks developed through the Aga Khan Trust for Culture – ranging from Al-Azhar Park in Cairo, to the Khorog Park in Tajikistan, from the restoration of Babur's Gardens in Kabul and the gardens of Humayan's Tomb in Delhi, to the Forodhani Park in Zanzibar and new parks now under development in Bamako, Nairobi, Vancouver and Edmonton.

All in all, the Wynford Drive complex will represent a rich tapestry woven from widely varied strands. And the fact that we have come so far in pursuit of this dream owes everything to those who have believed in it so deeply.

We are grateful for the support of so many public officials, successive Canadian Prime Ministers, regional and city leaders, and local ward councillors like John Parker and his predecessor, Jane Pitfield. We also salute the contractors from Carillion who are working to implement the project, as well as our museum partners from around the world, the members of the Bata family whose support has been so helpful, and the staff and volunteers who have given so much of themselves to this effort.

We owe a great deal to all who have made gifts of time and treasure and endeavour to this project, including, most especially, the Ismaili community in Canada and around the world who have contributed to the development of Ismaili Centres and Jamatkhanas, and to the fund which was set up to commemorate my Golden Jubilee. This project has been designated as a Golden Jubilee project, and is a beneficiary of those generous gifts.

Finally, my thanks, again, go to all of you for joining in this event. I hope you will feel, as I do, that you have been part of a distinctive observance – celebrating efforts which is impressive in scale, in aesthetic ambition, and in its cultural inspiration – contributing in the best way possible to Canada's pluralism.

As we look ahead, we can anticipate with some confidence that the Wynford Drive project will be a beautiful part of the future – a proud gift from our generation to future generations – even as it celebrates so fittingly what past generations have given to us.