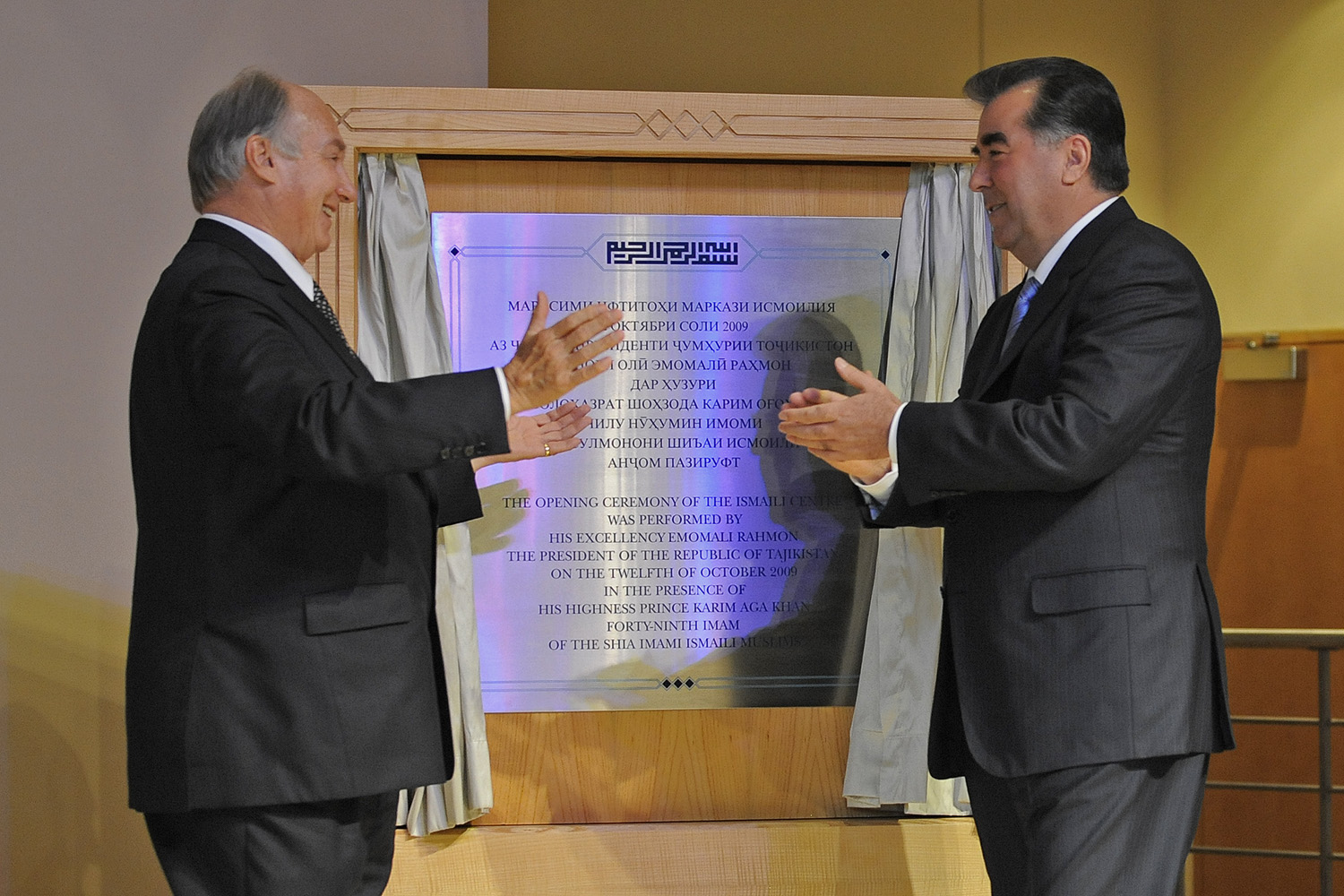 The ceremony was attended by the Mayor of Tajikistan's capital, Dushanbe, Mahmadsaid Ubaidulloev, senior government officials, diplomats, scholars and leaders of faith communities as well as a variety of civil society and business leaders from numerous countries. Representatives of the Ismaili community from around the world were also present.

Thanking all those who had donated their time, knowledge and material resource to the project, the Aga Khan recalled Central Asia's rich cultural and scholarly tradition, describing the new Centre as “a place for looking back on that rich and powerful history in grateful and solemn remembrance.”

“It will be a place as well for peaceful contemplation of the spirit, and of the world, as we live our lives in the present moment. And it will be a place to think about the future and how this profound heritage can shape and inform tomorrow's world. This Centre aspires to give physical form and spiritual space for pursuing all of these objectives,” he said.

Inspired by some of the region's most distinctive monuments, the architecture of the Ismaili Centre blends many different craft and artisanal traditions of Central Asia. Designed to facilitate cultural and intellectual exchange, the Centre aims to re-invigorate and promote the spirit of enquiry characterised by scholars whose contributions over the centuries were encouraged by the Ismaili Muslim community under the patronage of its leadership.

Located amidst gardens and waterfalls off a main thoroughfare in Dushanbe, the Centre in sandstone baked brick and glazed blue and turquoise tiles, acknowledges the vernaculars of the 10th century mausoleum of the Samanids as well as the grand courtyards of Samarkand, Bukhara and Khiva. Equipped to host exhibitions and conferences, concerts and recitals, the complex includes a resource centre, classrooms, multi-purpose spaces, courtyards and an amphitheatre. Technical innovations include an elastic roof diaphragm to transfer structural stress in this highly seismic region, a heating and air conditioning system based on water-source heat pumps used for the first time on this scale in the region, as well as a heat recovery wheel for energy efficiency. Canadian architect Farouk Noormohamed has carefully integrated social and cultural imperatives in a synthesis of fine detail in a range of materials including wrought iron, tile and some three million fired bricks.

Paying tribute to Tajik culture as one which promotes a strong sense of history and a vibrant spirit of social harmony, the Aga Khan said “one of the beauties of ceremonies like this one is that they link us to people in other places – and to people of other ages.”

“This ethic of connectivity with others has deep spiritual roots – in Islam as for other faiths. It stems ultimately from humankind's sense of humility in the presence of the Divine,” he said. “In this light, human diversity itself is seen as a gift of Allah, cultural differences are embraced as a blessing, and different interpretations of faith are seen as a mercy, one that nourishes the Ummah's vast identity and its constructive interface with society at large.”

The Aga Khan added that the Holy Quran calls upon Muslims to compete in good works, “and just as the Ismailis have done for centuries in this lovely land, we will uphold that responsibility in service to the Tajikistan of today and tomorrow.”

Also speaking at the ceremony, His Excellency President Rahmon commended the Aga Khan on the opening of the Ismaili Centre, saying it was a true manifestation of friendship and solidarity. “His Highness constantly endeavours to promote peace, security, unity and brotherhood amongst all Muslims,” he said. The Aga Khan's vision “that ‘diversity of humankind is a gift of God' and that ‘pluralism in Islam is a blessing rather than a burden' is of great value, which needs to be supported and understood.”

He applauded the Ismaili community for being an integral part of the Tajik society, and for their active contribution to the process of development and progress. “I would like to express with confidence that this Centre, as a place of promoting humility, friendship, dialogue, openness, generosity, kindness and charity in society, will uphold high standards of activities with the aim of bringing together cultures, advocating moral and social values, and serving as a symbol of friendship and patriotism.”

The Centre marks a milestone in the history of the Ismaili Muslim community, whose presence in Central Asia dates back more than 1 000 years. Linguistically and ethnically diverse, Ismailis are widely spread across the region. During the 10th century, Ismaili teachings became known in Central Asia through the work of influential philosophers, natural scientists, thinkers and poets, including the pre-eminent Ismaili thinker Nasir Khusraw, known and respected across the region for his contribution to philosophy and the sciences of the time as well as to poetry and the development of Persian-based languages.

Comparable to other Centres in London, Vancouver, Lisbon, and Dubai, the Ismaili Centre Dushanbe, will be a place of congregation and contemplation that fosters understanding between cultures and enhances relationships among communities, government and civil society. The Ismaili Centres include within them spaces belonging to the historic category of jamatkhana, one amongst a variety of Muslim spaces of worship that have historically co-existed with the masjid or mosque in many Muslim communities.

The Aga Khan was accompanied at the ceremony by his daughter, Princess Zahra, his son Prince Hussain and his daughter-in-law, Princess Khaliya.

His Highness the Aga Khan
His Highness the Aga Khan became the 49th hereditary Imam (spiritual leader) of the Ismaili Muslims in 1957 after the death of his grandfather, Sir Sultan Mahomed Shah Aga Khan. He is the founder and Chairman of the Aga Khan Development Network (AKDN), a group of private, non-denominational development agencies working to empower communities and individuals to improve living conditions and opportunities, especially in sub-Saharan Africa, Central and South Asia, and the Middle East. The Network's nine development agencies focus on social, cultural and economic development for all citizens, regardless of gender, origin or religion. The AKDN's underlying ethic is compassion for the vulnerable in society. Its annual budget for development activities is in excess of US$ 450 million.

AKDN in Tajikistan
AKDN agencies work in Tajikistan in a range of areas–from economic development to education, rural development to cultural revitalization, health care to financial services. Operating in the country since 1992, AKDN draws on a strong base of experience in working with mountain societies. The Network is present in all regions of Tajikistan through its operations and investments, including the PamirEnergy Company, Indigo Telecommunications, and the First MicroFinanceBank.