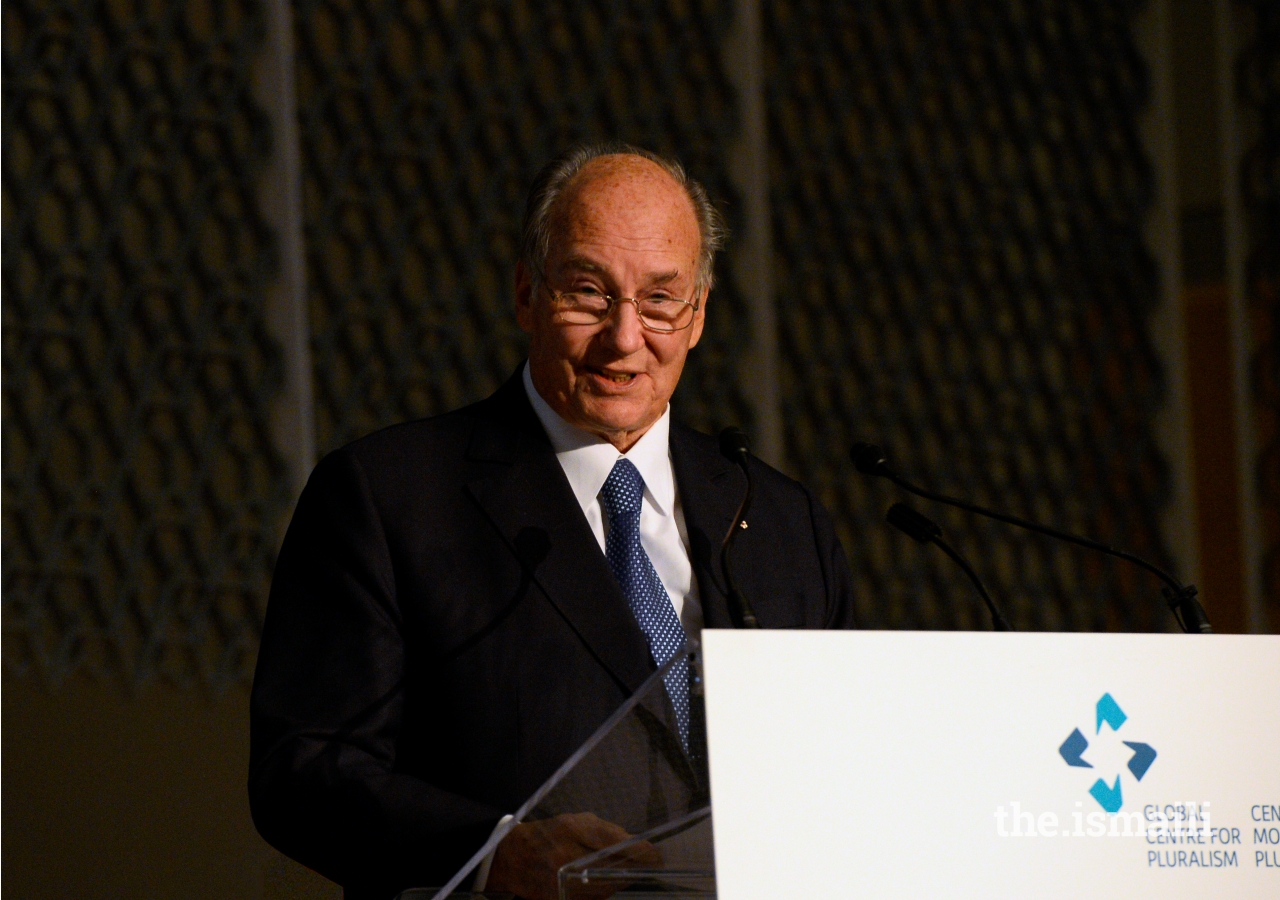 Mawlana Hazar Imam delivers remarks during the ceremony, The Global Centre for Pluralism was founded as a partnership between Mawlana Hazar Imam and the Government of Canada. Photo: Moez Visram
Location
Ottawa, Canada

What a great pleasure it is to join all of you in this wonderful celebration.

The extraordinary people we honour this evening have all demonstrated the same inspiring quality - the ability to respond creatively to the challenges of diversity.  At the same time, however, what is also most impressive tonight is the sheer diversity of their own particular stories.  As you may have noted, the three Pluralism Awardees come from three continents, and our Honorary Awardees come from seven additional countries.  But more than that, the nature of their work is itself truly multi-dimensional, as you will see as you learn about their accomplishments in more detail.

As you have heard, I am currently marking sixty years in the role I inherited in 1957.  This role has taught me a great deal about the challenges of pluralism - about the way those challenges can be met, but also the way those challenges are growing.  These are not new challenges, they are as old as the human race.  They include the human temptation to define our personal identities by what we are against - rather than what we are for.  They include the temptation to view difference, whenever it may appear, as something that might complicate one’s life, rather than as something that can enrich one’s life.  And they include the sometimes instinctive reaction that difference is a threat to be avoided rather than an opportunity to be embraced.

Some people make the mistake of thinking that pluralism requires them to dilute or de-emphasise their own distinctive identities.  That's not true. What it requires is to ensure that one’s individual identity is strong enough to engage confidently with those of other identities as we all walk together along the road to a better world.

And as we walk together on that road, the example set by others can be a powerful source of inspiration—and that is why the Global Centre for Pluralism has established these awards.   Their essential purpose is to share the power of inspiring examples with an ever-wider Community of Pluralism all across our world, a Community that will then create a growing momentum for inclusion - rather than exclusion – as a way to respond to the changes of our world.

In many ways, the establishment of this Award follows the pattern of the Aga Khan Award for Architecture which was established several decades ago.  The final outcome of the Awards process is important, of course, but what is also important (both for Architecture - and now for Pluralism), is the far-reaching process  that  leads to the selection of our Awardees.  It is a process that engages, over a two-year period, scores - indeed hundreds - of dedicated individuals. It includes those who search for qualified nominees, those who explore and investigate, and who then reflect on the difference that pluralistic commitments can make in specific contexts, at specific moments, in specific places.

It is one thing for us to talk about the general principles and theories of Pluralism.  But it is even more exciting to see, close up, what Pluralism can mean in practice.

As I mention that process, I want to salute all who have participated in it -including the Selection Committee, and our Jury - led by former Canadian Prime Minister Joe Clark and including  His Worship Naheed Nenshi, Advocate Bience Gawanas, Dr. Dante Caputo and Madame Pascale Thumerelle.

I am also deeply pleased to be joined here tonight by the Right Honorable Beverly McLachlin, Chief Justice of Canada.  I well recall her groundbreaking 2015 Pluralism Lecture in Toronto, when she reminded us that living harmoniously amid diversity demands, and I quote her, “great generosity of spirit and openness of mind.”

Those very qualities certainly characterise the Chief Justice herself.  Her leadership of the Supreme Court will be greatly missed when she retires at the end of this year.

It is my honour tonight to express to her our profound thanks for her powerful example, as I ask you to join me in welcoming her to this podium.