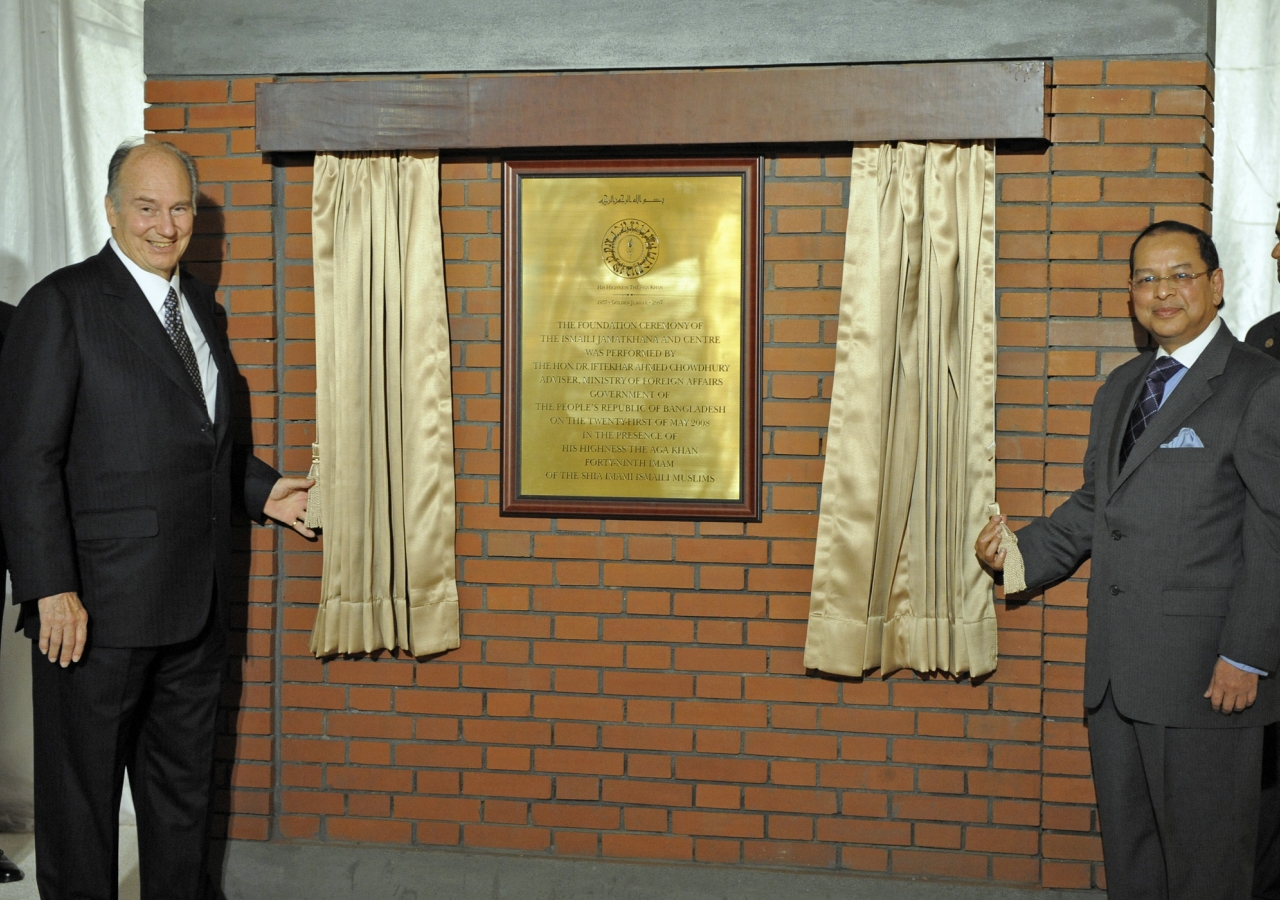 Speech at the Foundation Ceremony of Dhaka Jamatkhana

It is a special pleasure to welcome this distinguished and diverse audience to this Foundation Ceremony, as we formally mark the beginning of a new Jamatkhana in Dhaka.

This is a day which has particular meaning, of course, for the Ismaili community in Bangladesh. But it is good to know that it also means so much to the whole of this city and this country. For we see this new addition to the Dhaka cityscape as a symbol of our continuing historic commitment to this country, and further reinforcement of the warm relations which the Ismaili people have enjoyed here.

We are honoured that all of you have taken time to share with us this moment of celebration and gratitude, of reflection and recommitment.

Let me try to convey, at the outset, a sense of the hopes and dreams which have inspired this effort. For we have a rather clear picture of what we would like this Jamatkhana to be. There will, of course, be facilities here for congregational gathering and for administrative functions. There will also be places for welcoming the larger community here at seminars, lectures, cultural and educational events and other programmes. But we also see the new Jamatkhana as a place which will make an important statement symbolizing an important message. We see it as a place of peace and tranquillity, filled with a spirit of humility and prayer. It will not be a place for conceit or self-satisfaction, but rather a place for search and enlightenment. It will be a place where men and women in this pluralist country can help strengthen those common bonds which reflect our common challenges and which will shape our common destiny.

Those bonds reach deep into the past. My own thoughts have frequently been drawn back to the past this year, as I mark the 50th anniversary of my own role as Imam of the Shia Ismaili Muslims. I have memories, even from when I was a very young man, of how my grandfather, Sir Sultan Mahomed Shah Aga Khan, just after the partition, urged Ismailis in India to settle here in what was then called East Pakistan. In subsequent years, in the last decade of his life, he continued to urge our community to invest both time and treasure in the economic development of this region, including companies that would become among the major employers and exporters in Bangladesh. This commitment to Bangladesh has continued in more recent years, often channelled through the many activities of the Aga Khan Development Network. We are deeply grateful for the close, cooperative relationship which the Network enjoys with the government and the people of this country.

The Ismaili tradition looks upon a Jubilee anniversary as a good time to launch new projects. It was at the time of my grandfather's Platinum Jubilee – marking 70 years as Imam – that he opened a new jute mill here – a company which is still called the Platinum Jubilee Jute Mills. Similarly, we have viewed this Golden Jubilee as an auspicious time for new beginnings, and that is why I have the pleasure this week of participating in two ceremonies of this sort: here at the site of the new Jamatkhana, and also at the nearby site of the new Aga Khan Academy in Dhaka.

The Jamatkhana and the Academy will serve complementary roles as they work to dispel ignorance, cultivate a cosmopolitan outlook and nourish the cause of peace and harmony among peoples and cultures, within this country and around the world.

I cannot think of a better way to celebrate this Golden Jubilee than by setting off in a formal way down the road that will see two beautiful new facilities rise up as a part of this city, dedicated to spiritual and educational pursuits – the life of the spirit and the life of the mind – commitments which grow fundamentally out of Islamic traditions, and which will be instrumental in the future development of this country. The story of development here in Bangladesh has been not been an easy one; complicated, as it has been, by natural disaster, acute human demographic density and political instability. We have been reminded, very sadly, just this past month of the devastating power of natural cataclysms, and of the importance of preventing, preparing for and recovering expeditiously from such disasters. This is another important cause in which our Network has shared a deep concern with the people and government of this country.

We should also keep in mind, however, that Bangladeshi progress has been marked by a number of solid developments. The world has admired the progress you have made in building up neighbourhood groups and a variety of other civil associations, in the way you have coped with difficult challenges and threats, by your progress in the pursuit of food and income security, and by your educational advances – especially for women, and by the pioneering example you have set in demonstrating the potential of microfinance as a building block of a vigorous civil society and as a stepping stone toward social inclusion for the very poor.

The world admires as well the openness with which the people and Government of Bangladesh have welcomed the expertise and co-operation of external partners, and your reciprocal effort to share your own development lessons with the rest of the world.

Bangladesh has made a courageous commitment through the years to values which have grown out of Islamic traditions, but which are of universal applicability: a dedication to human dignity; to taking and giving the hand of friendship; to humility in the all-enveloping Divine presence which impels one to celebrate God-given differences rather than denigrating them; and to the persistence of hope, and to the resilience which hope bestows.

The Jamatkhana to be constructed here will express these same values, representing Ismaili identity to be sure, but doing so as a statement not of separation but of convergence and connectivity.

These remarks would not be complete without paying a special tribute – in your presence – to all of those who have contributed to the creation of this project and who will be involved now as this work goes forward. We thank the members of the community who have helped to lead this effort, as well as the donors, architects, and official bodies who have helped in launching this project. Their vision has been matched by their energy, their sense of commitment has been matched by their abilities. We salute them for what they have done, and we wish them much success as they continue now to turn their vision into reality.

I look forward to returning here again to see this Jamatkhana when it is completed. And I know that we will all look back on this day in years to come as a very happy beginning.

I extend to you all my thanks again for sharing in this special day with us.